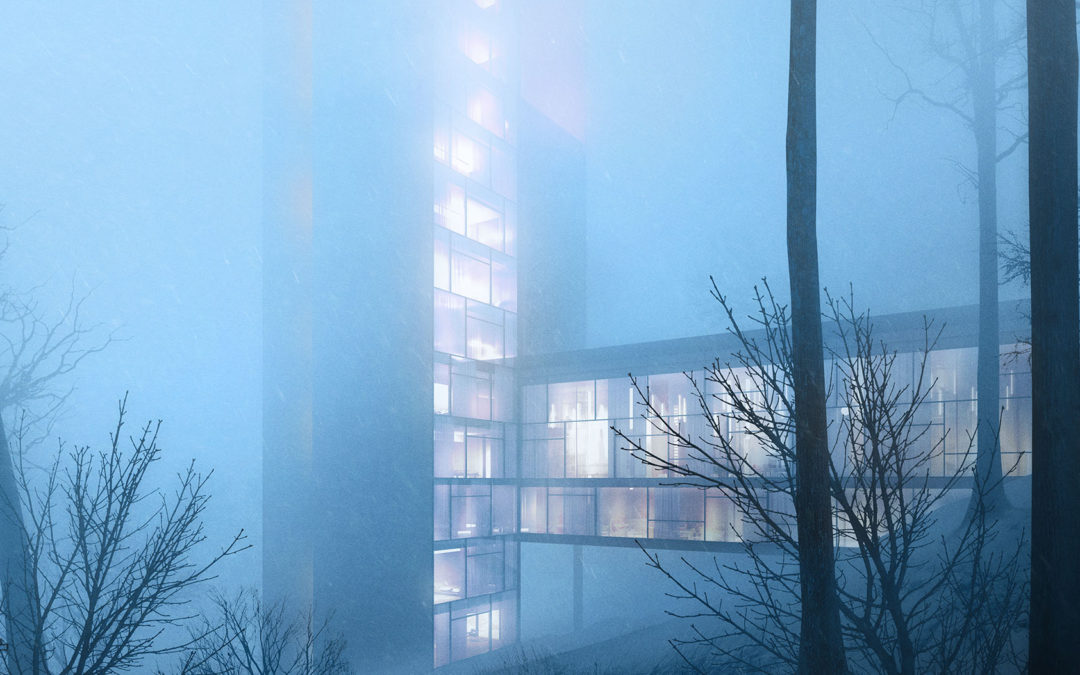 For this year’s Winter Special illustration, I decided to create a series of images partly because I couldn’t decide on one view, but also to experiment with the effects of thick snow at different view angles. I was less interested in the architectural clarity of the images and more interested in the atmospheric depth and how light and color react in a thick snow storm. I also forced myself to spend less time on these images than I normally would so that I would get less distracted by the details and focus more on the big moves.

I am breaking down one of the images below to show the layers of color and fog inserted into the image throughout the process. One of the most important steps was to separate out the light and move it above the fog because of how light seems to cut through the haze whereas everything else softens and absorbs the tones of the fog.

The V-Ray Base rendering used a simple overcast light and some minor interior lights. The fog/snow diffuses the light so much that there are no sharp shadows from the sun. I also knew going into this that the image would be heavily Photoshopped, so the details and quality of the rendering were less important.

Next, I darkened the image. I did this by painting a dark blue color over the image and setting the Layer Blend Mode to “Multiply”. This was done to further remove some detail from the geometry, give the scene more of a blue overtone, and help create more contrast between the shadow and light coming in the next step.

Here, I amplified the interior lights. This was done by first masking away the dark overlay from the previous step. Next, some textures were added in and some warm overlays applied on top. Because of the layers of fog coming next, I again ignored the details and just focused on getting things close.

The first layer of fog was created with grainy textures that have a movement and energy to them. This layer of fog will be softened by other fog layers coming next.

The next layer of fog was applied using the Brush Tool. In the top left corner, I layered in a light blue paint with a darker blue paint in the bottom right corner. I was trying to create a gradient over the image as well as fade out the architecture as it goes higher in the sky.

Applying a blue overlay brought together all of the different tones in the image. This was done by painting a blue paint over the entire image and setting the Layer Blend Mode to “Color”.

Not much will be seen in the distance, but I still took this time to insert some subtle tree silhouettes and ground textures.

This is where the image gets some of its energy back. Now that I have applied several layers of fog, the interior light is largely covered up. Therefore, I went and grabbed my interiors group, copied it, and brought it above the fog layers. Finally, I set the group’s Layer Blend Mode to “Soften”. This increased the light in some areas, but left others still muted. Also, as the light moves further up into the denser areas of the fog, I painted in a soft glow to spread the light out more.

For the really foggy scenes, I often do a copy merge of all of the layers at the top of the layer stack, then give the new layer a slight blur. Then I lower the opacity of that blurred layer to around 50 percent. This adds just a little more softness to the image and really plays up the idea of light bouncing around the atmospheric molecules.

Finally, I added some snow textures to convert the foggy scene to a snow storm. I used to generate my own snow texture, but there are actually some good textures you can get if you simply do an image search for snow textures.

The Final Series of Images

Finally, you can see all of my past winters special images by following the links below