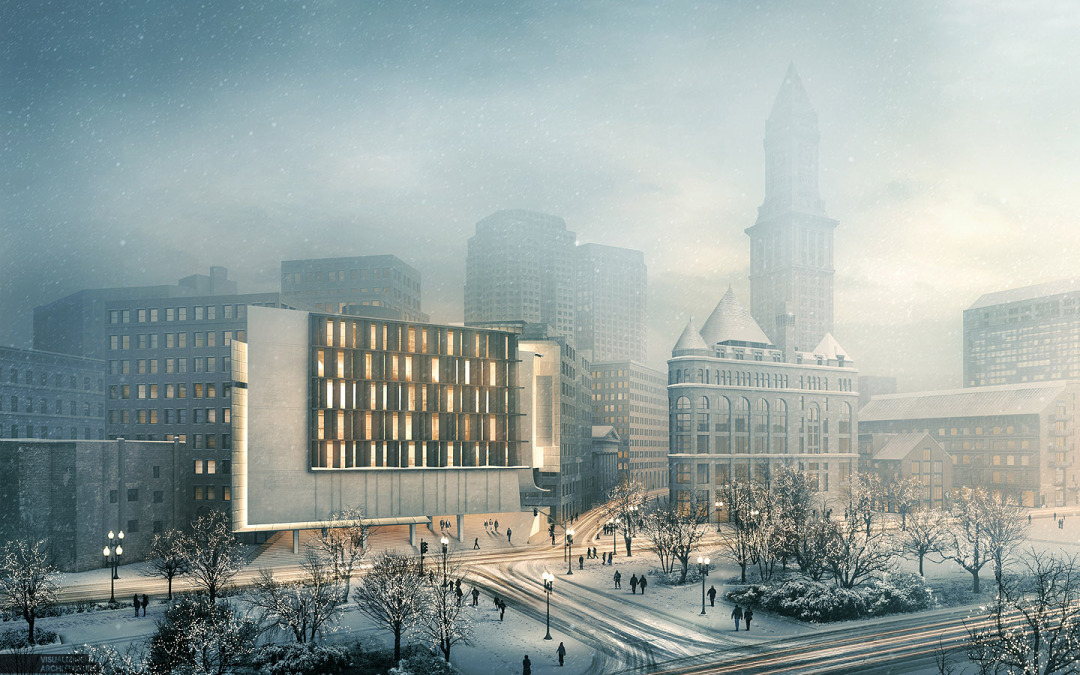 For this winter special #4, it was all about the lighting and atmosphere. Going into this, I knew the illustration was going to be heavily post processed so I spent little time preparing the 3d model and just kicked out a quick V-ray base rendering with no lights.  This has been my most ambitious winter scene yet as compared to the last three seen here because of the detail and view angle. The transformation from the base rendering to the final illustration was extreme, which is outlined below. 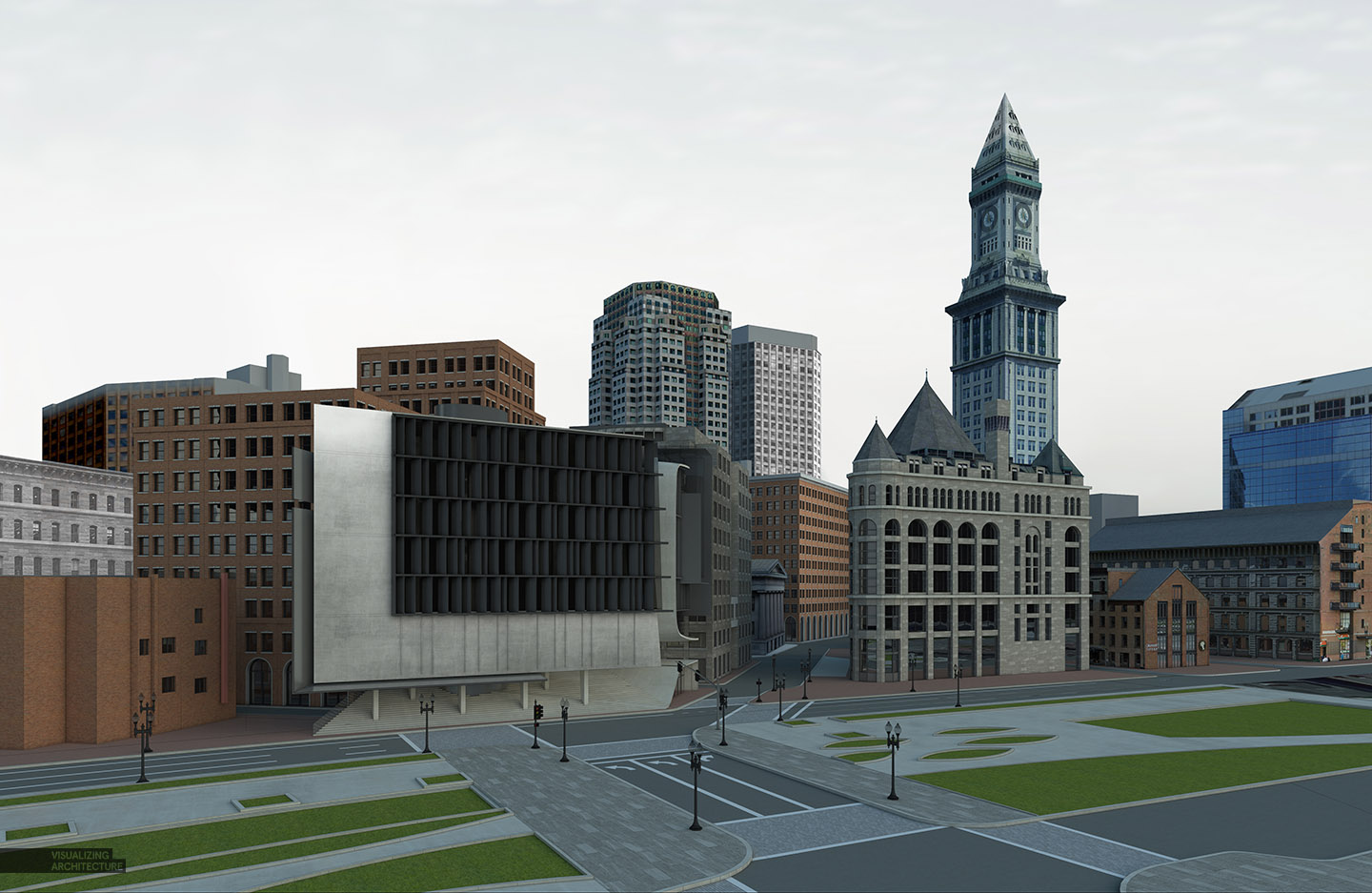 The base rendering was pretty brutal. However, I was just looking for a rendering with soft shadows and some basic texture information.

To get the image closer to a winter scene, I desaturated the colors and added a clay rendering to the ground plane. This scene will have snow on the ground so using a clay rendering acts as a good base to Photoshop snowy textures on top of. A clay rendering is the same as a typical rendering except that all materials in the scene are replaced by a simple matte gray texture. I have a tutorial explaining how to create a clay rendering using Kerkythea, seen HERE. 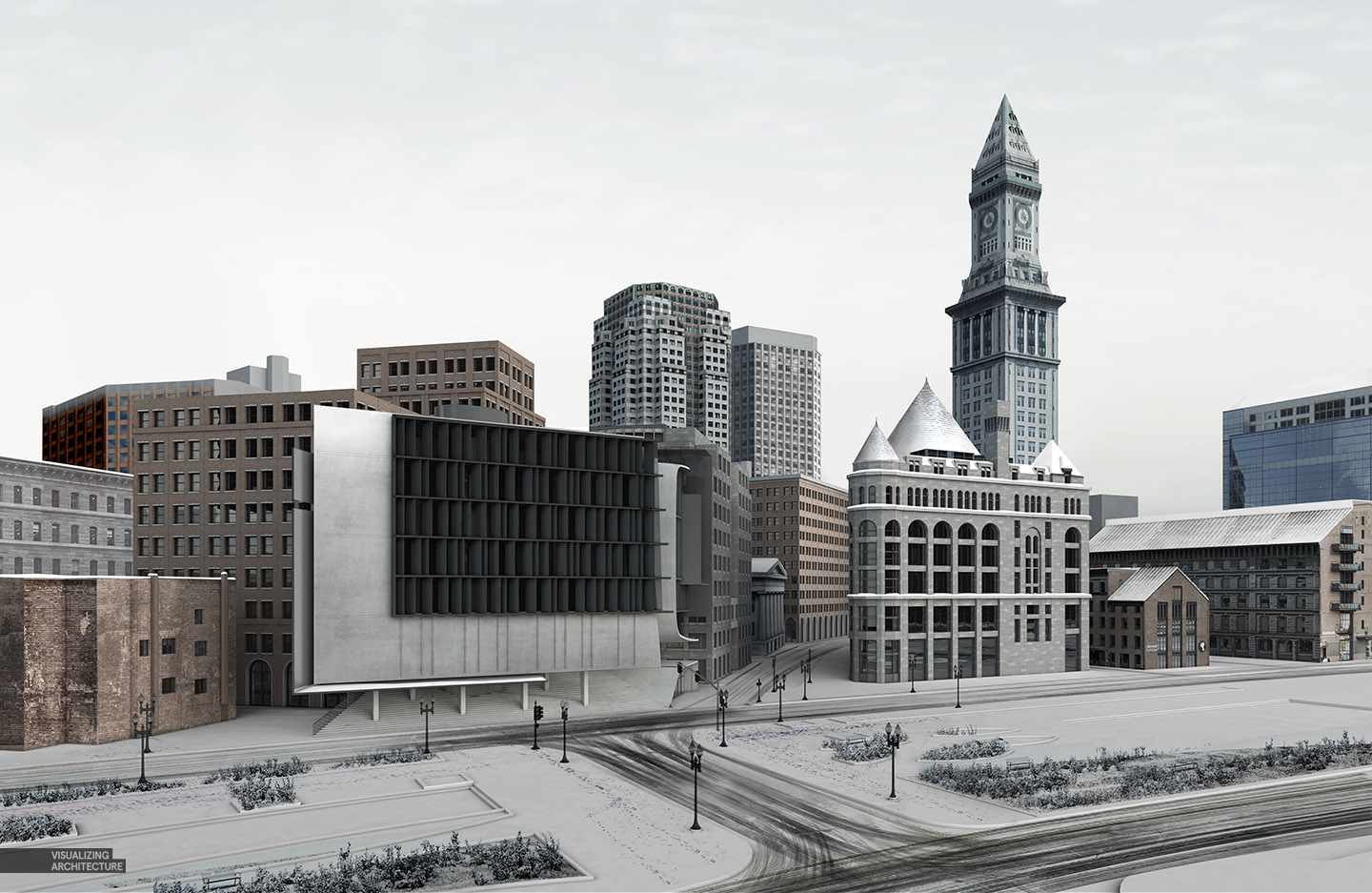 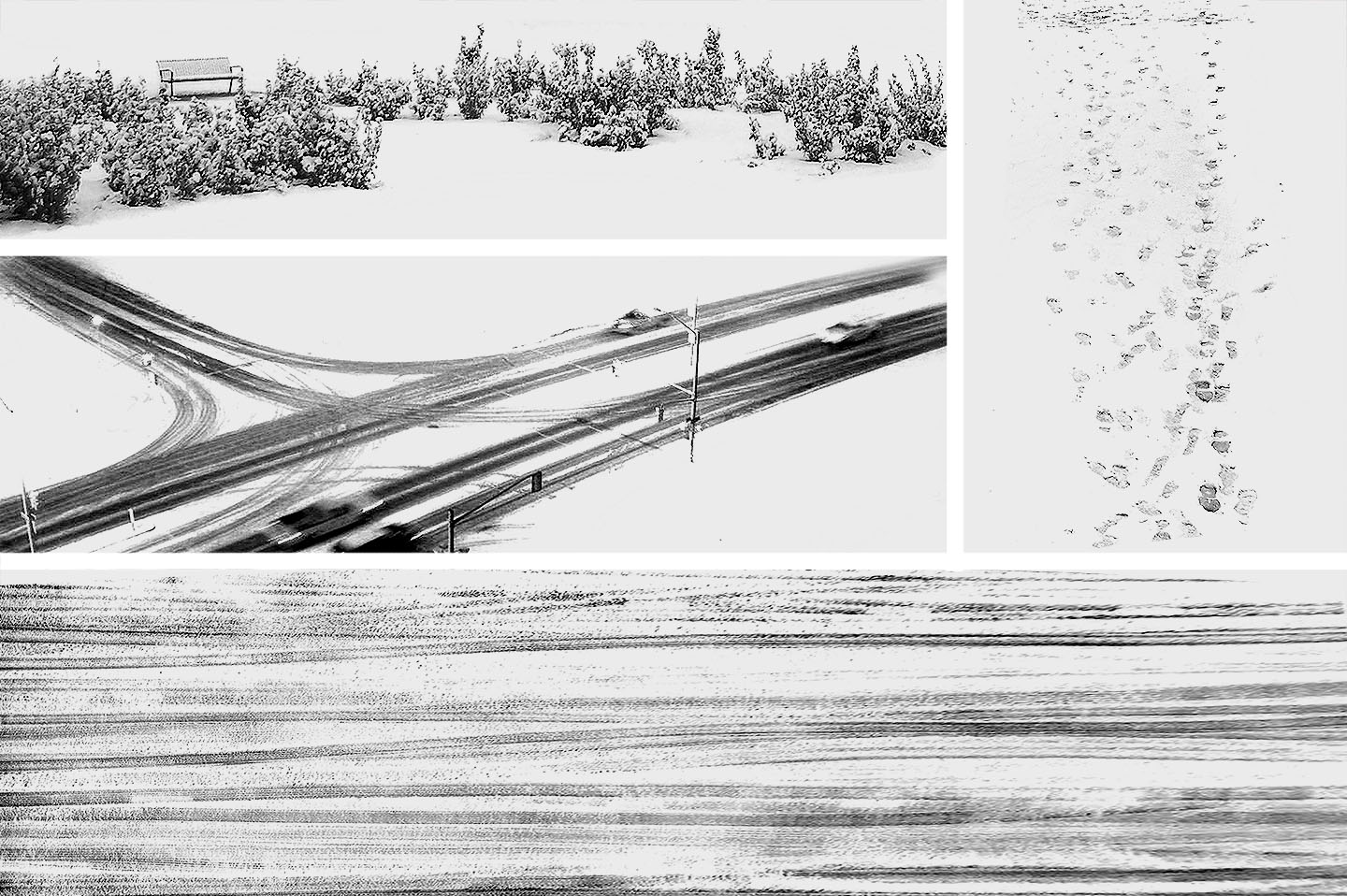 As discussed in my last post, it’s all about the textures and that is what I focused on for this step. I combed through the internet looking for textures of tire tracks, foot prints in snow, and snow covered plants. I then slowly layered them on top of the clay rendered ground plane. Because they are black and white snow scenes, I didn’t need to cut anything out. I only needed the dark part of the textures so I just set the layer blend modes to “Multiply”. 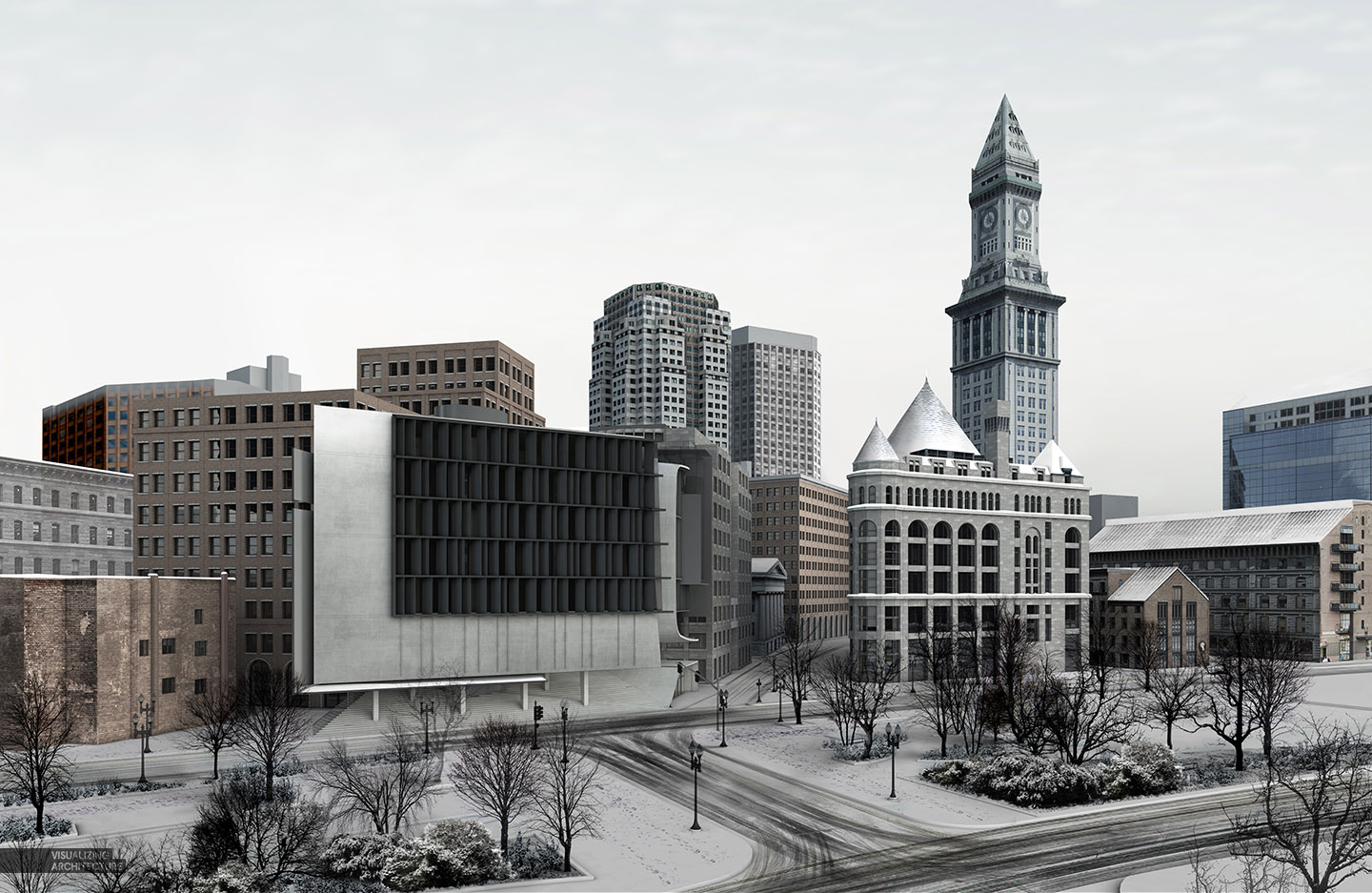 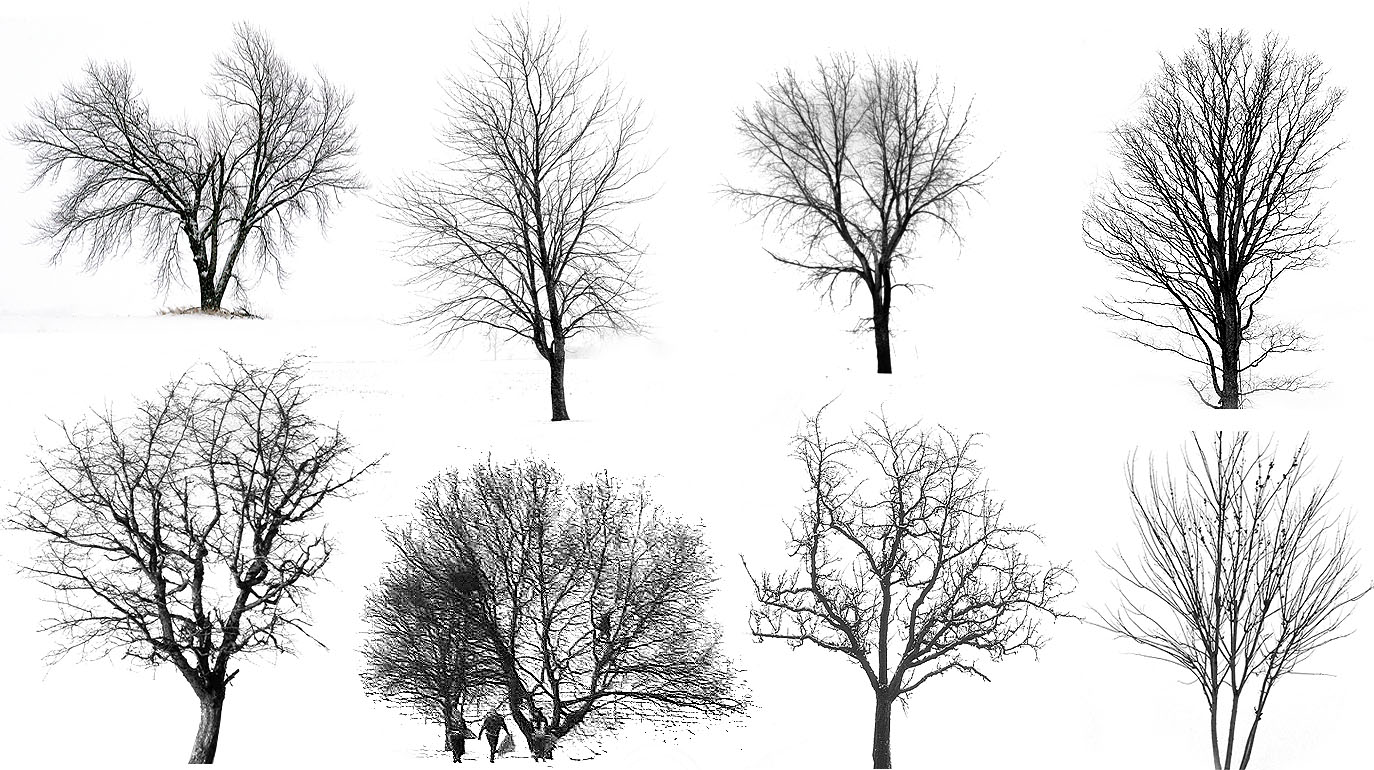 Oddly enough, this step went fast. It is very easy to find winter trees with snowy white backgrounds. As with the above step, no cutting was needed. I only need the dark parts of the tree images so I set the layer blend mode to “Multiply” which gave me trees without the backgrounds. Nailed it. 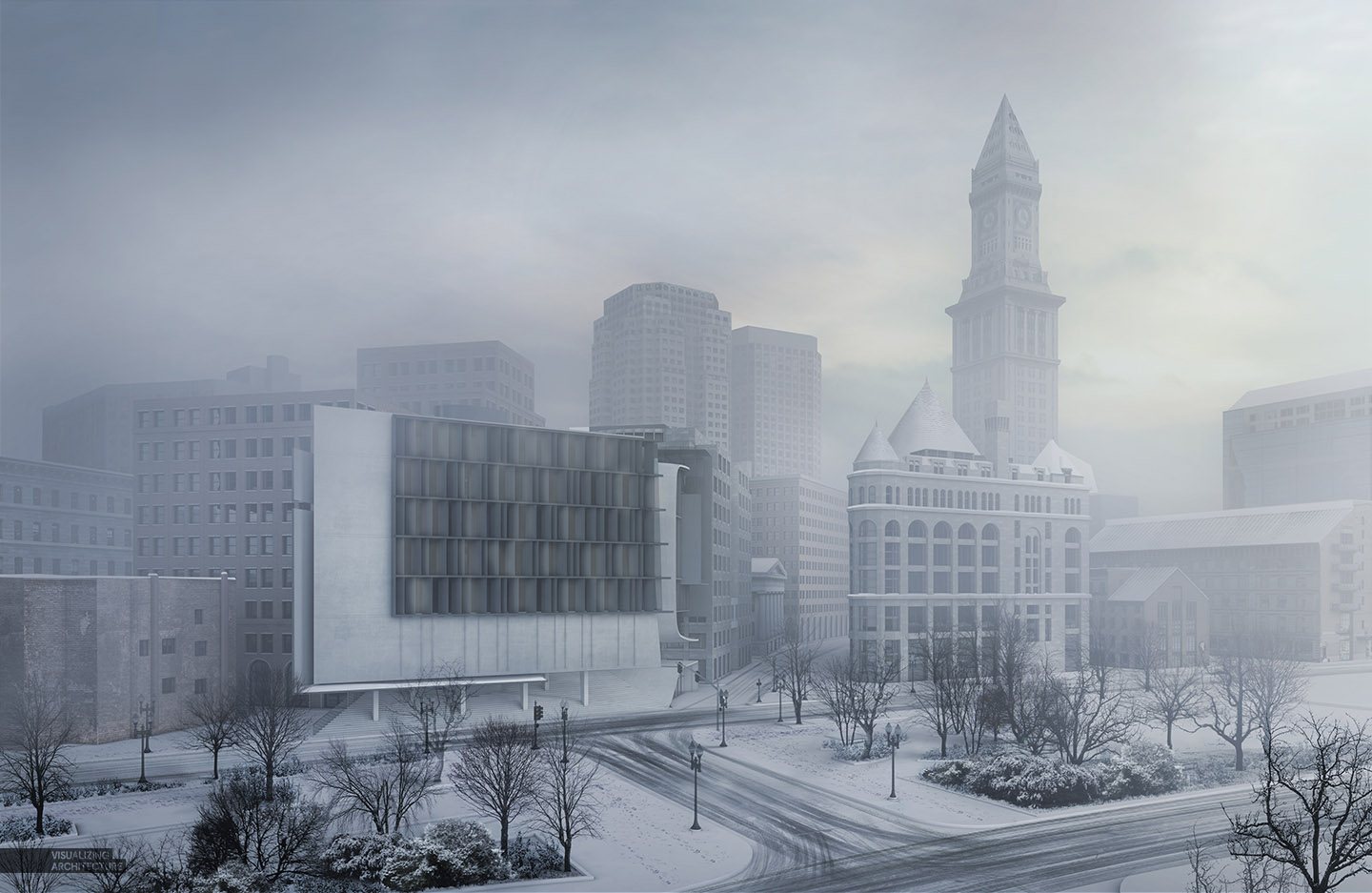 This step is where the image makes a huge mood shift. The more I create visualization, the more I realize the power of fog/haze/atmosphere. It’s something that has taken lots of practice and not the easiest thing to explain in a tutorial because everything is so subtle. I have attempted a tutorial in the past found HERE  though I am probably due for an update soon. I also added a blue color overlay over the entire image. 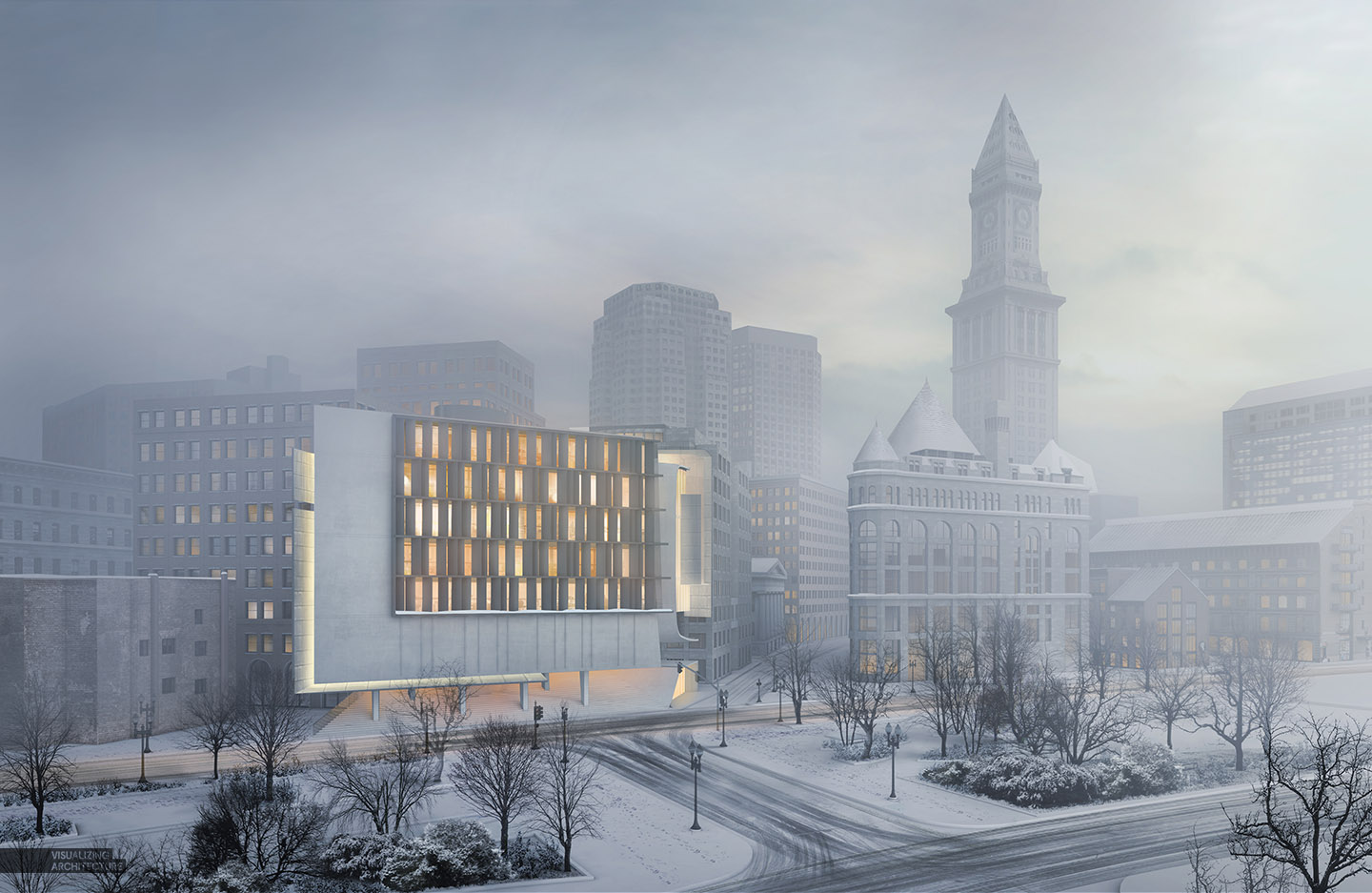 Lighting up the architecture provided an opportunity to bring the focus of the image to my design. I therefore lit my design much brighter than the surrounding context bringing hierarchy and drama to the illustration. A tutorial for manually lighting a building can be found here. 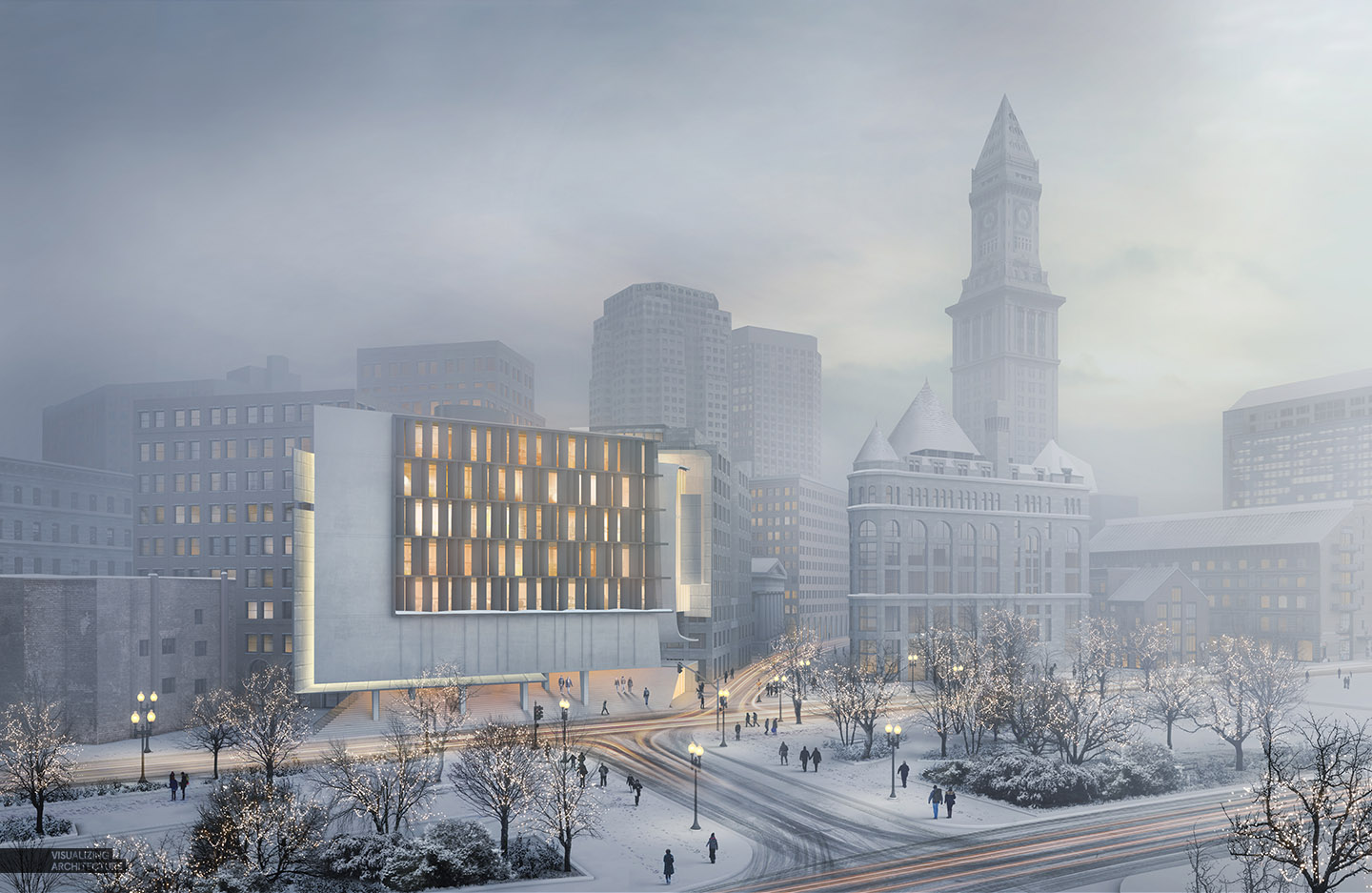 I needed to activate the ground plane so I inserted some people, car light streaks, and because this is the winter special, some tree lights. I was careful not to overdo it because I didn’t want to draw too much attention away from the architecture. 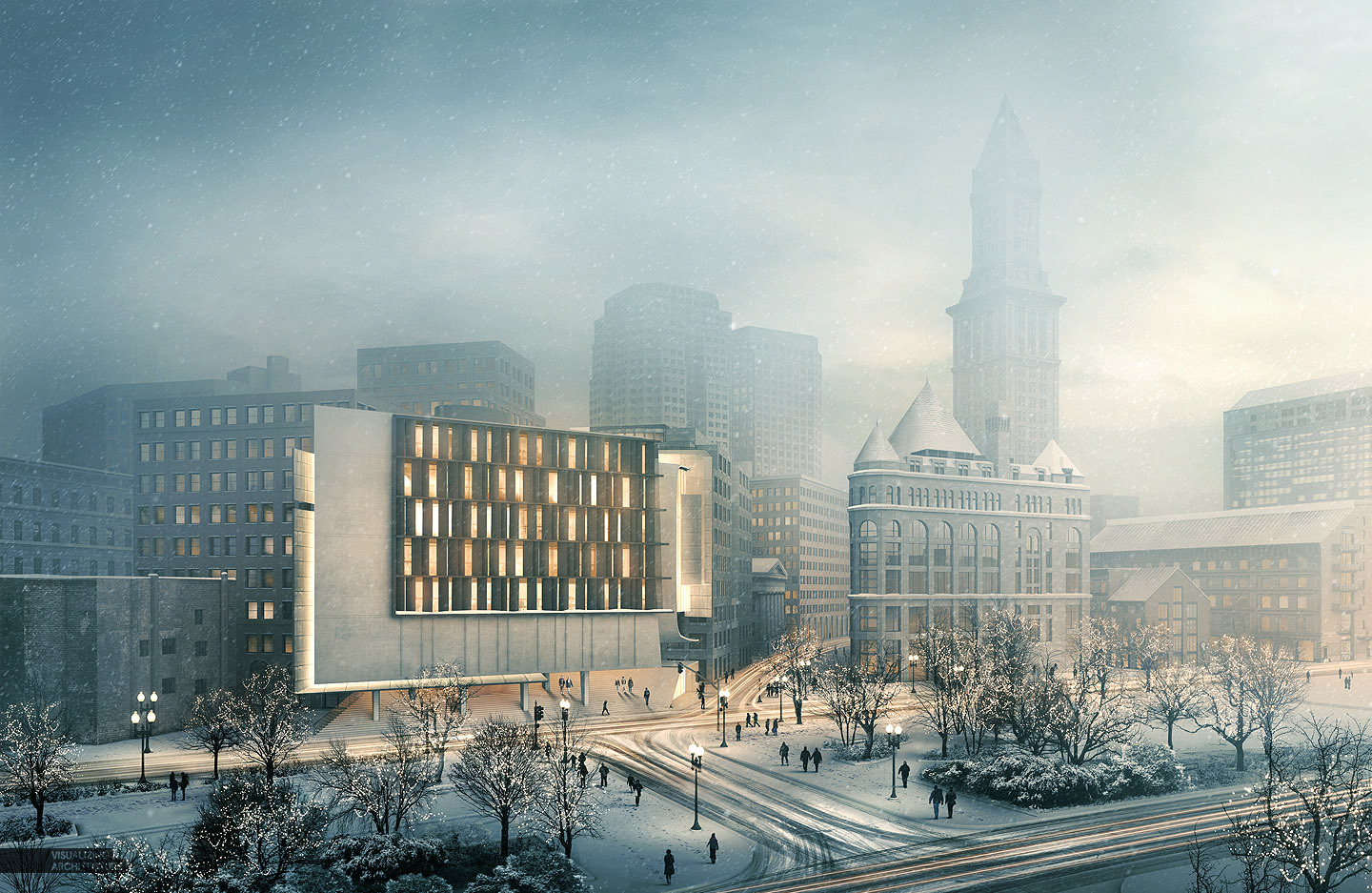 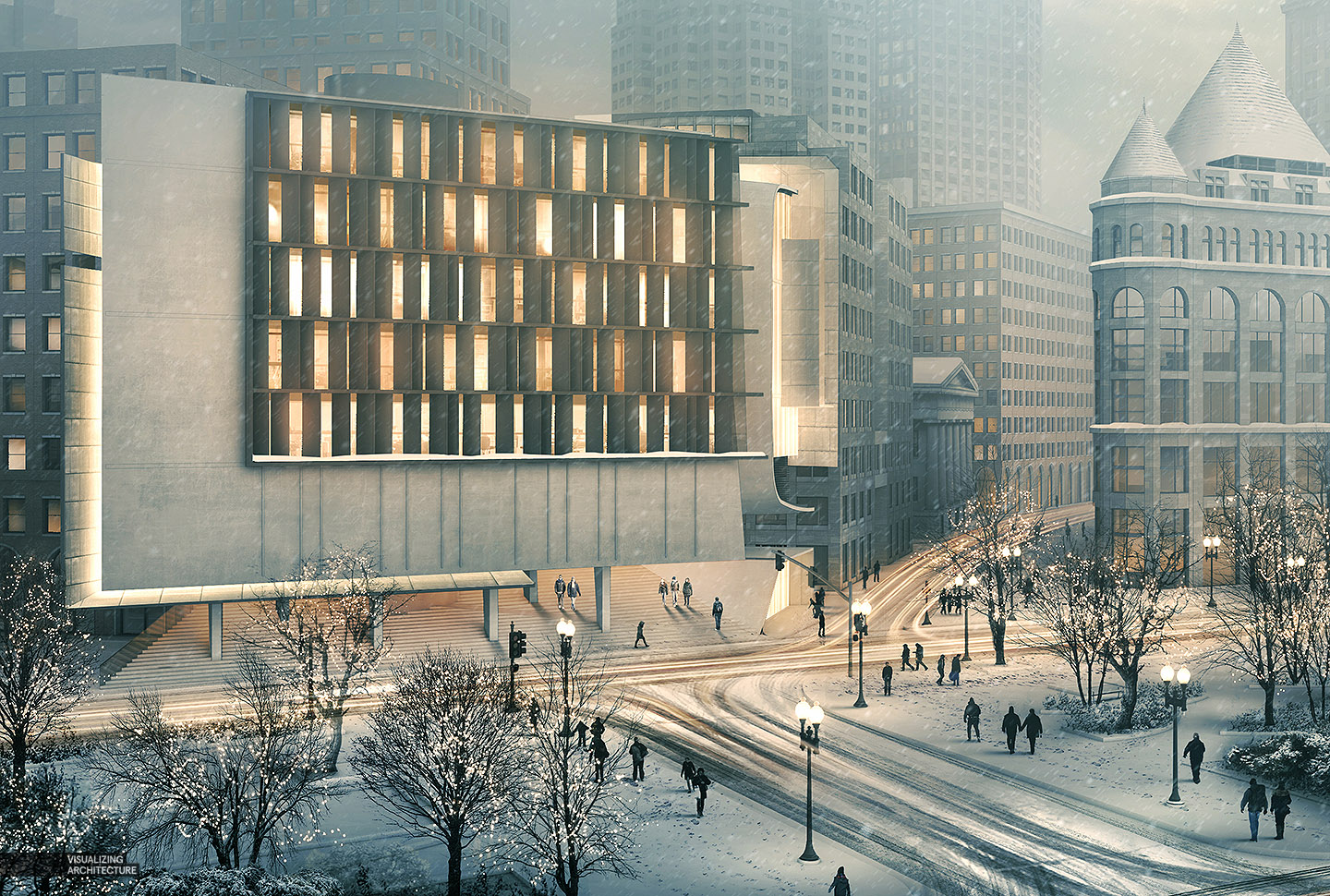 The illustration was coming off  too gray for my taste so I tweaked the colors to be more saturated and blue. I also added a little snow falling just to bring home the winter scene feel.