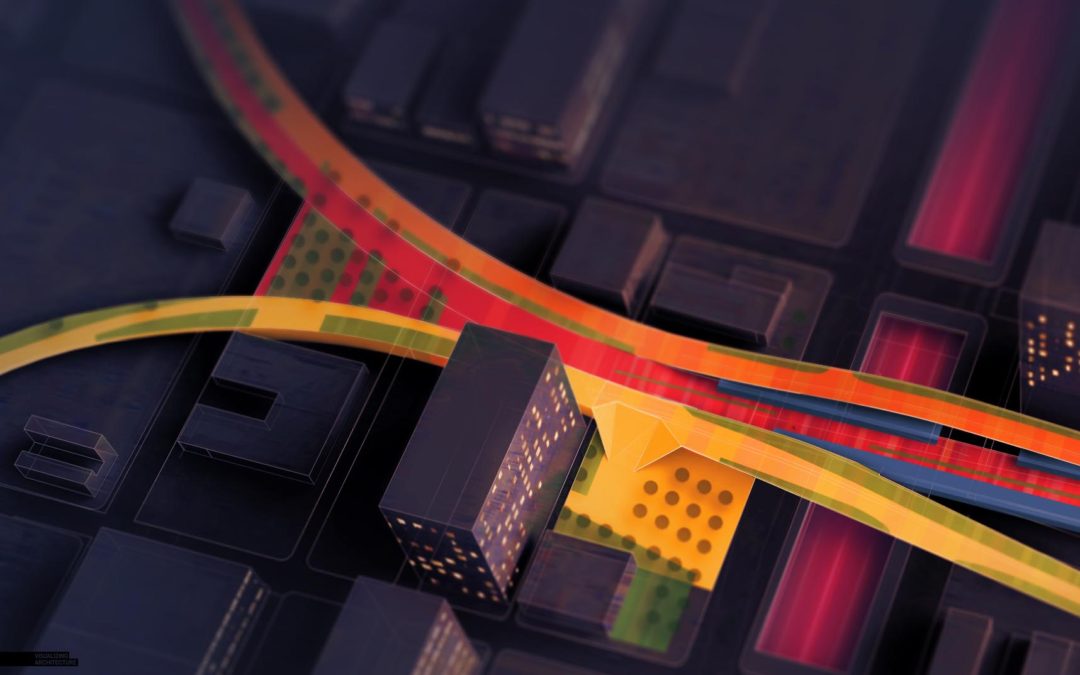 I always look to diagrams to help tease out ideas or to clarify my thoughts as early on in the design process as possible. The diagram being broken down below is working off of a simple model with almost no detail or structural articulation making it easier to update as the design evolves. This illustration is meant to study the big picture concept of the programmatic zones and will help me to think through some of the future design moves. At the same time, I know this will eventually be used in presentation materials, so I introduced some quick atmospheric and graphical effects to add a little emotion and give the image some texture. Items like annotation and information keys will be added later as I get closer to inserting the illustration into the portfolio. 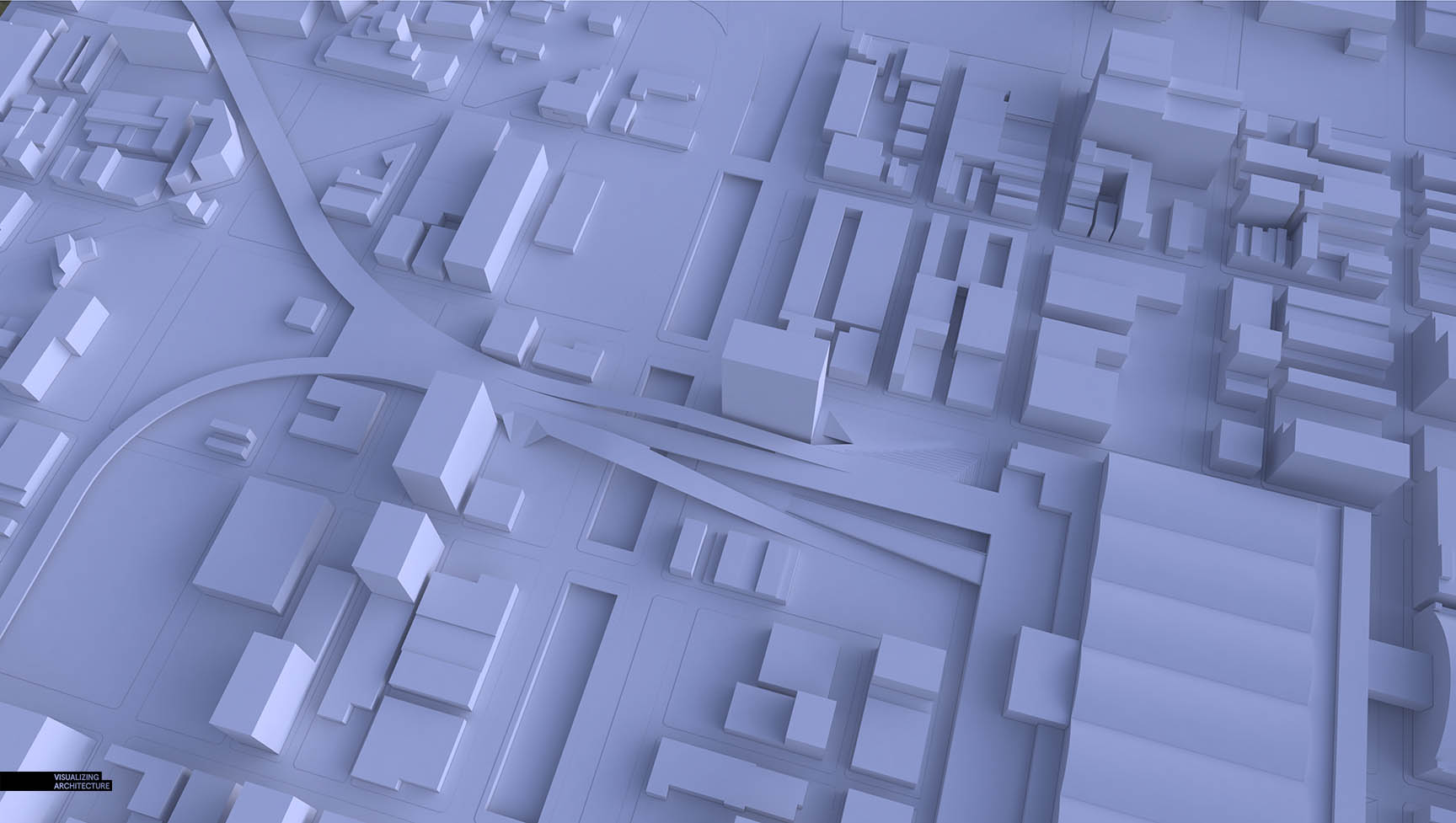 The 3D model for this diagram is as simple as it gets. The model consists of basic massing with no window and structural articulation to give me light and shadow information. The model was built in Sketchup and rendered in V-Ray. 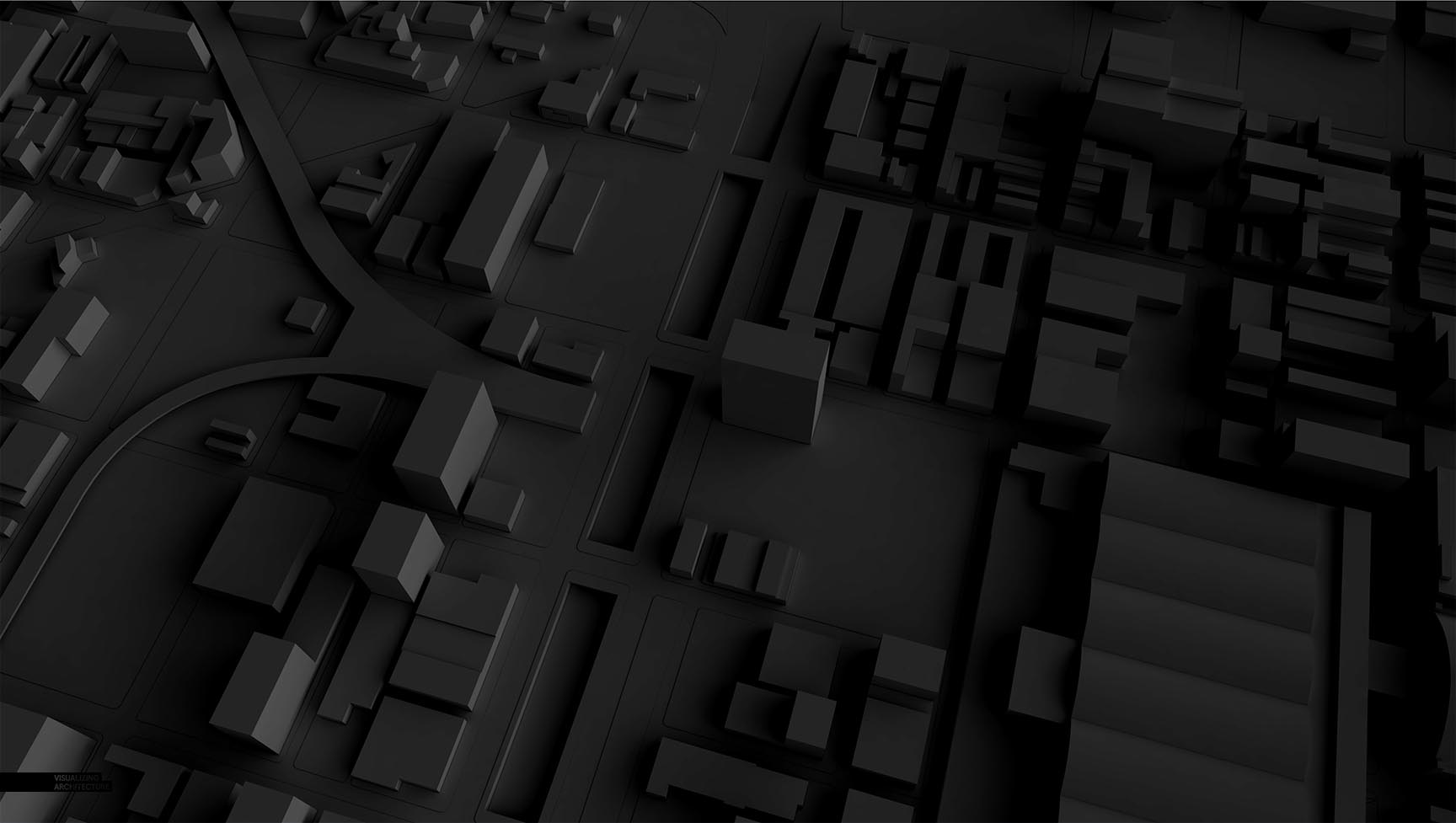 The base rendering was desaturated and darkened by going to “Image>Adjustments>Hue/Saturation” and by adjusting the levels. 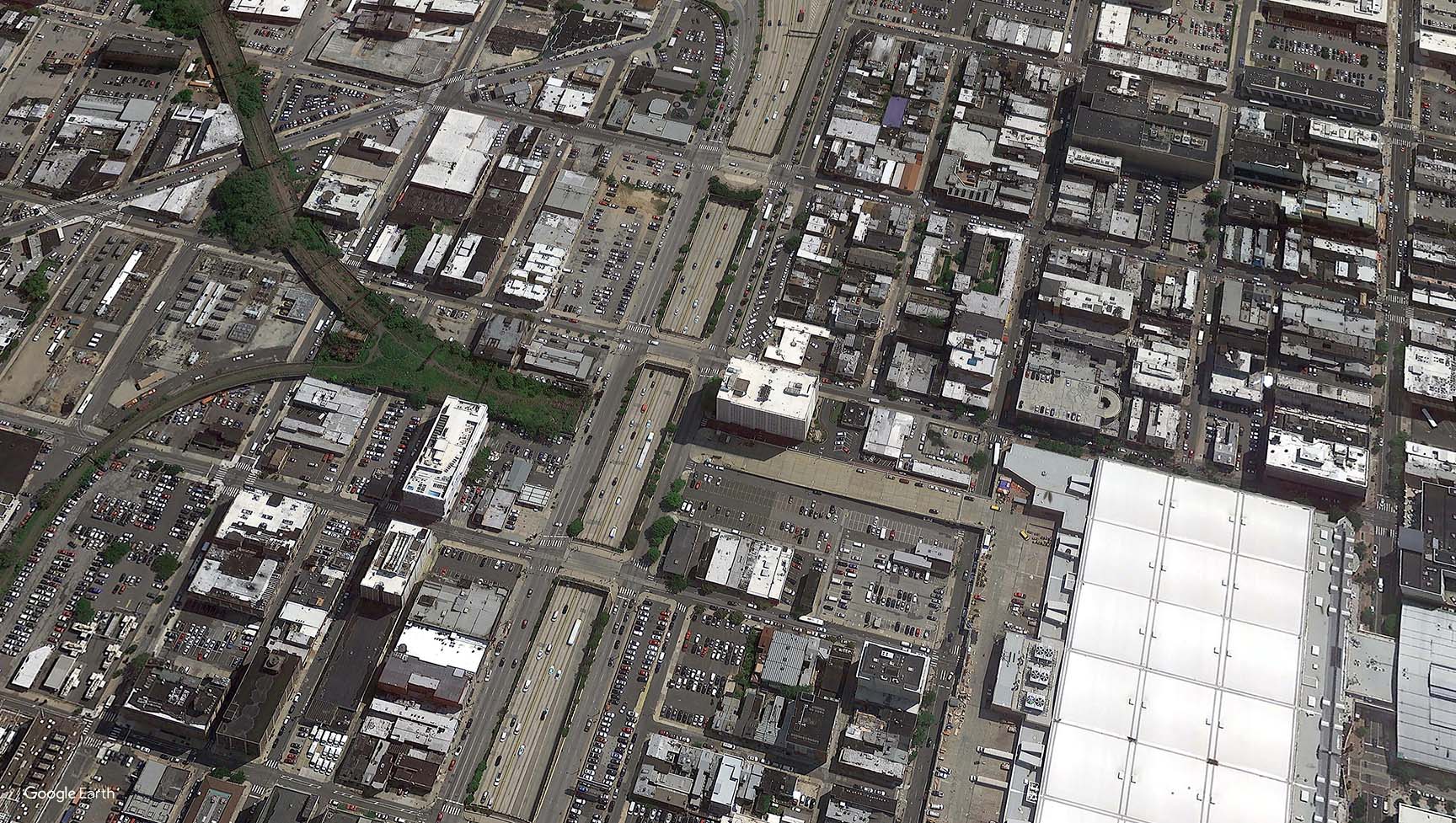 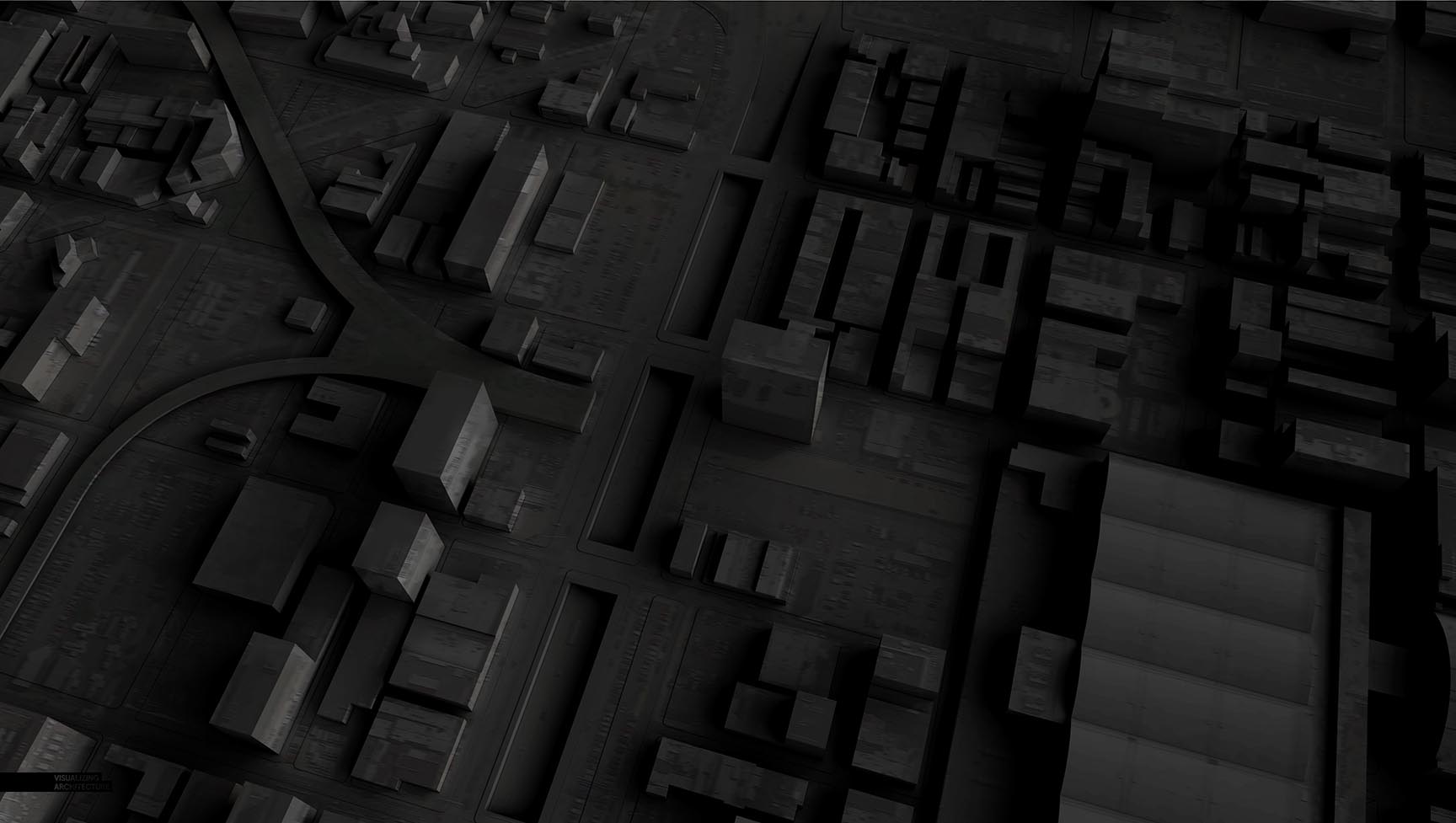 An aerial image was distorted to match the perspective and then the layer blend mode was set to “Overlay” giving the image a subtle texture. 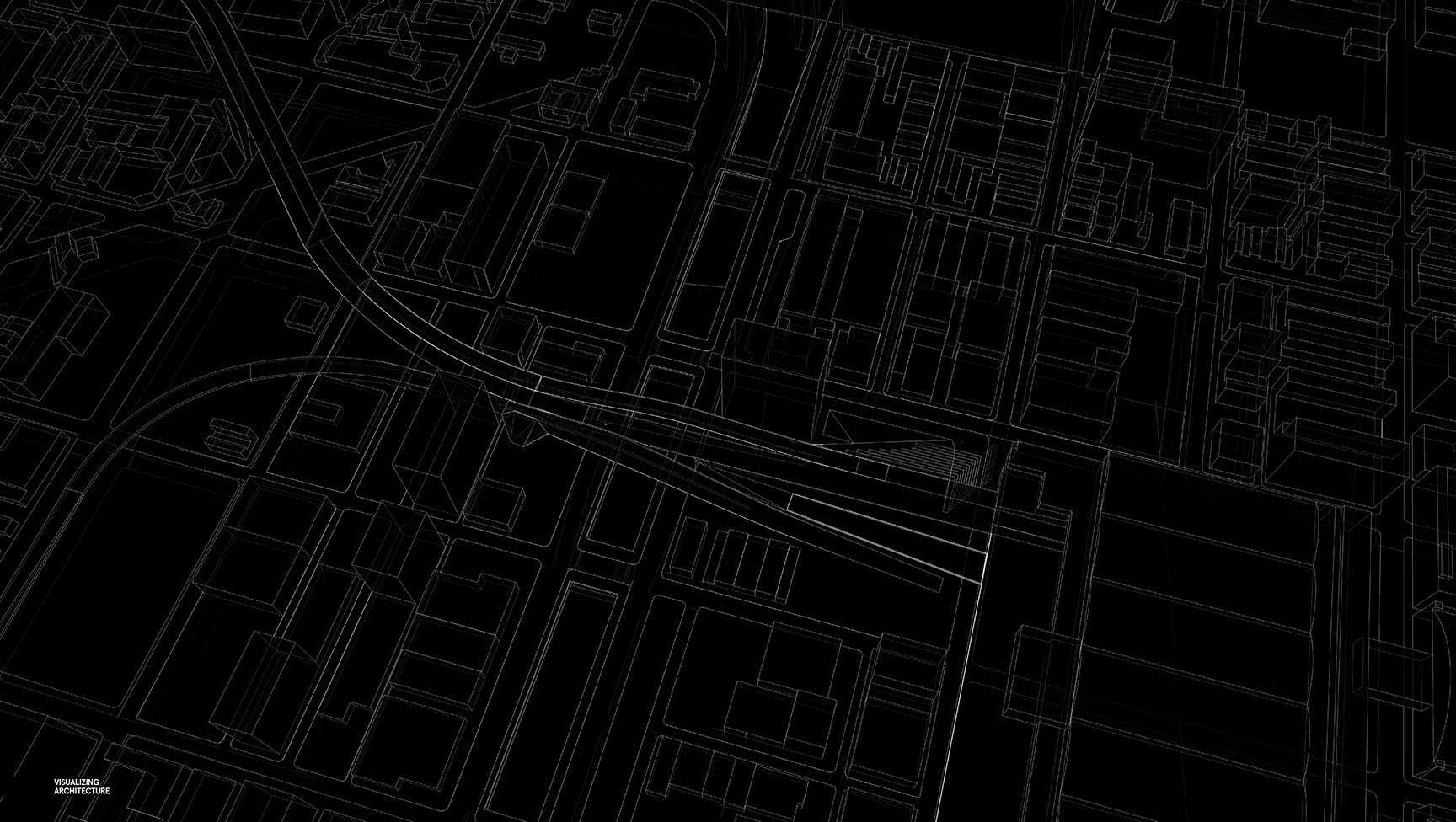 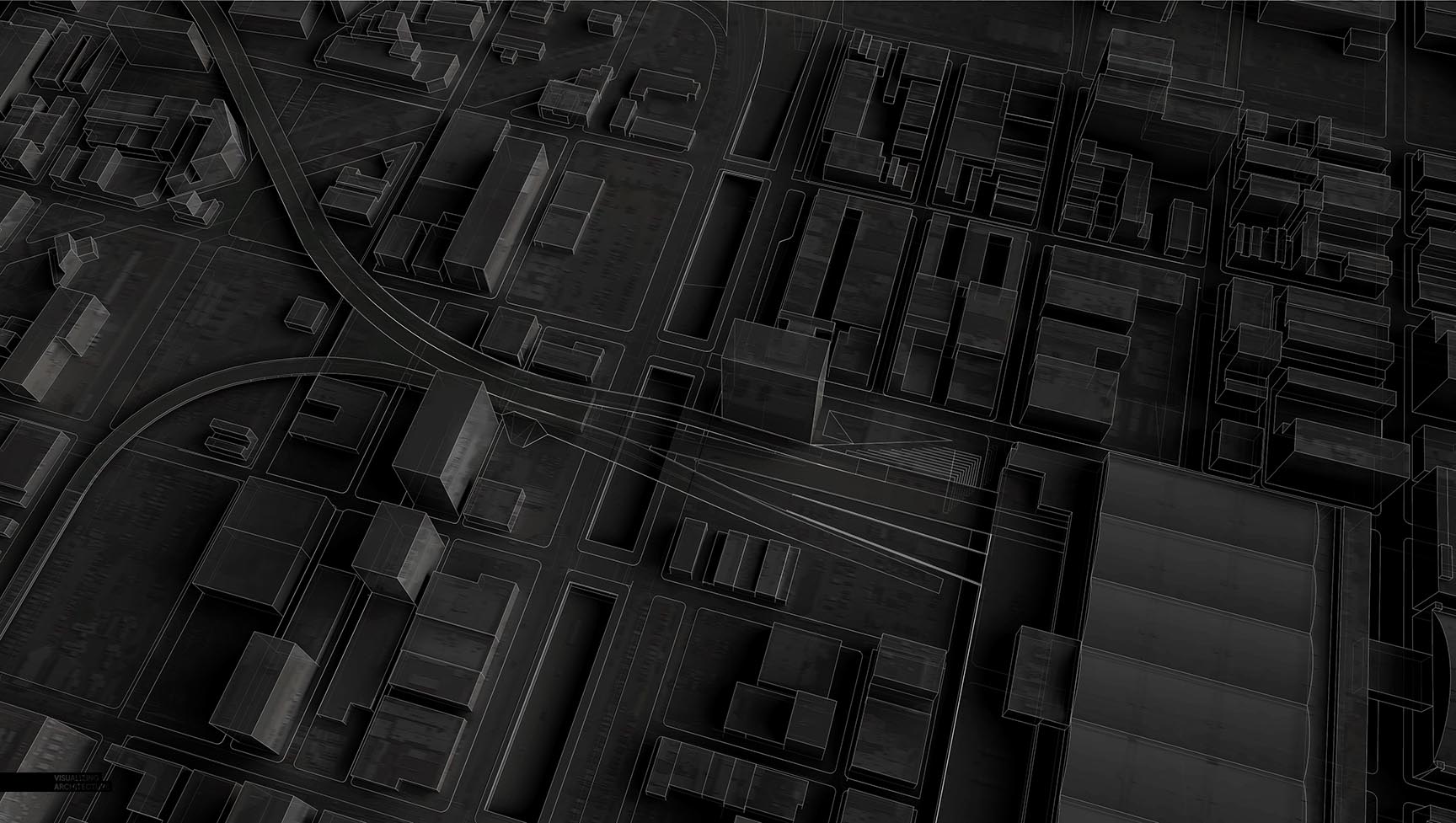 5. Turn on the lights 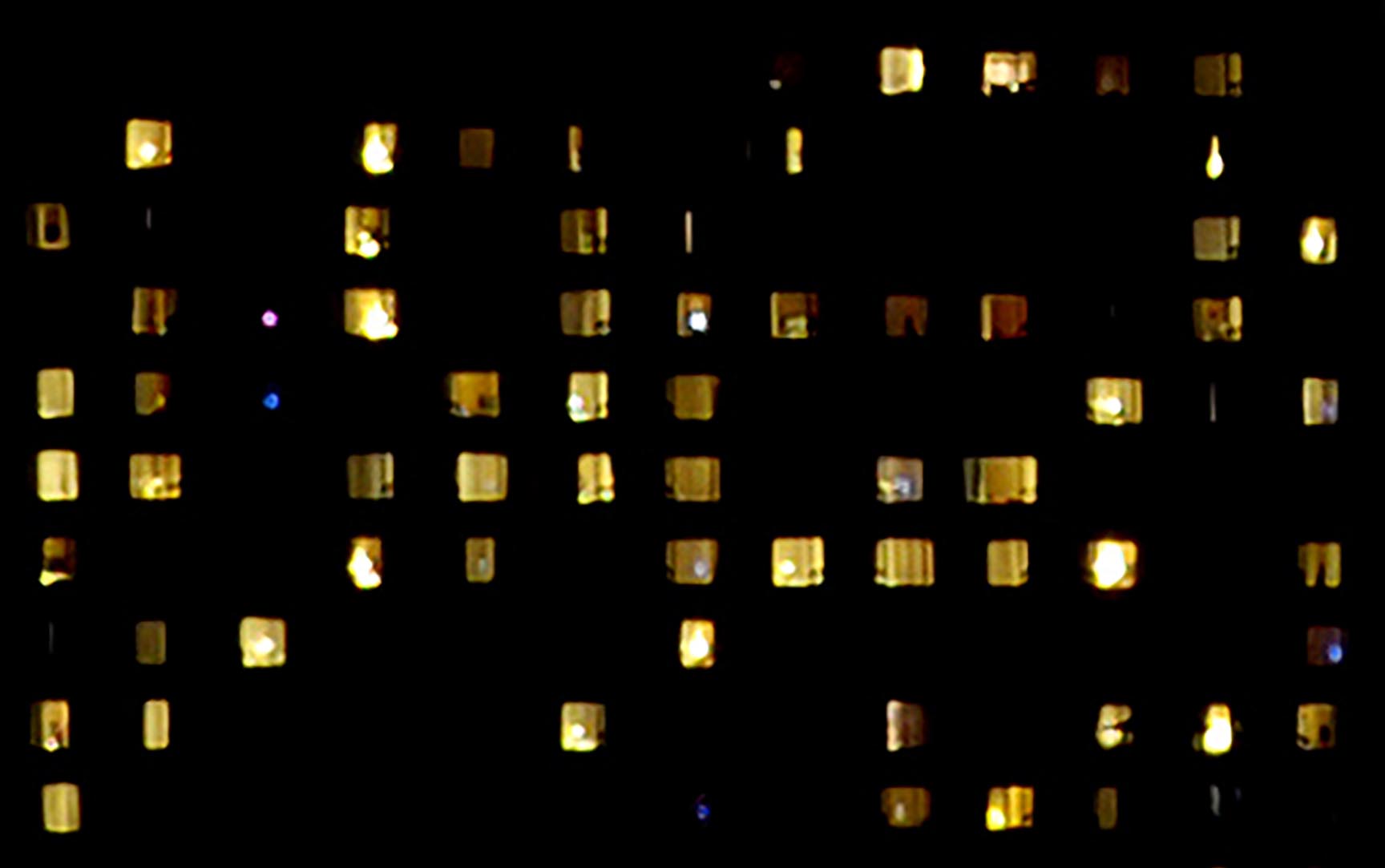 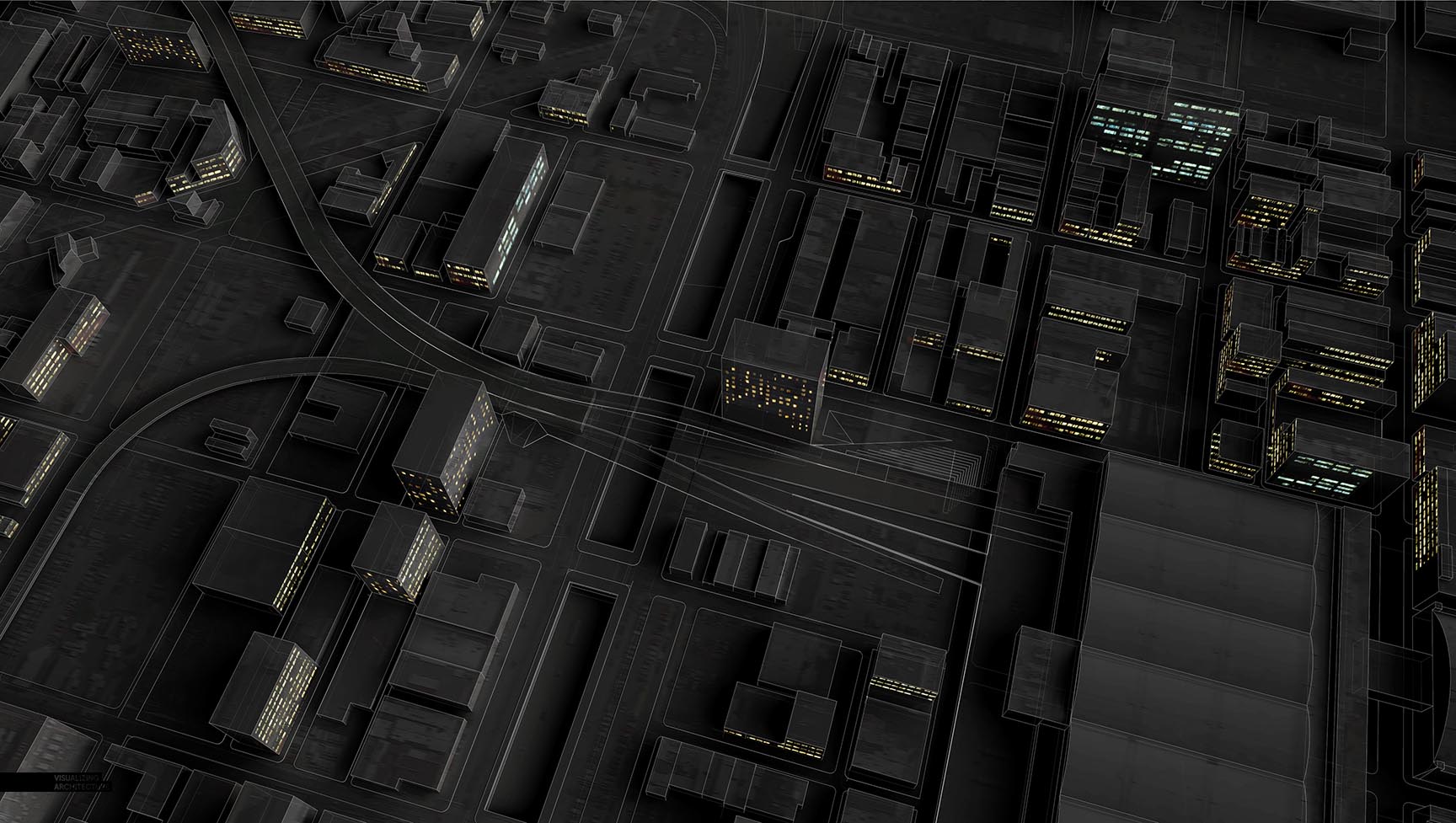 As a last move to add just a little more texture to the context, I found an image of building lights, and overlayed that texture onto several facades. Using the image above, set the layer blend mode to “Screen” and simply distort the perspective to match that of the contextual massing. Since this is a diagram, I wasn’t concerned about being accurate, therefore allowing me to move fast and only spend a few minutes on this step. 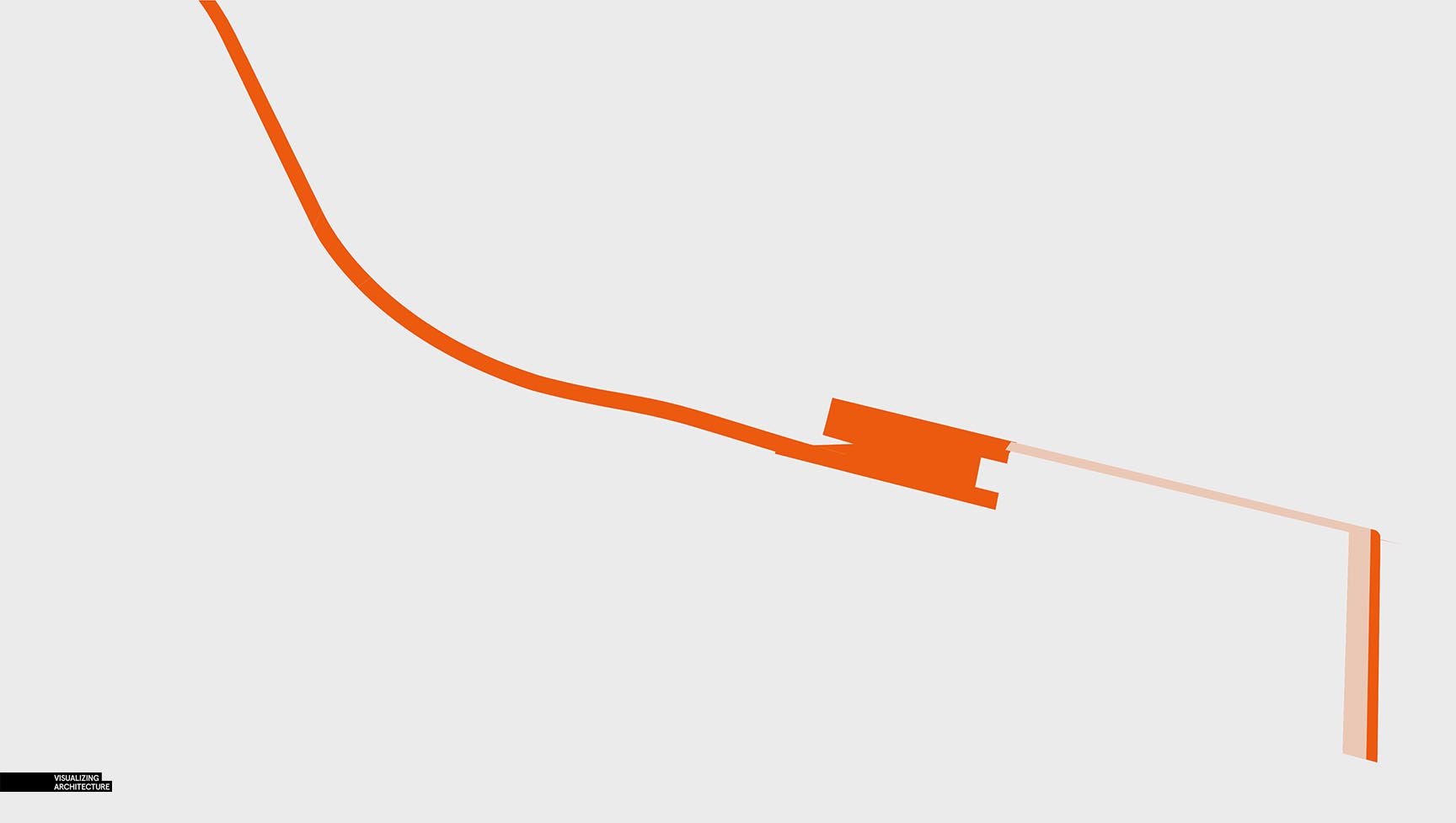 There are many ways that the color could be added through Photoshop. The way that I approached it was by first painting an area with solid color, in this case orange. 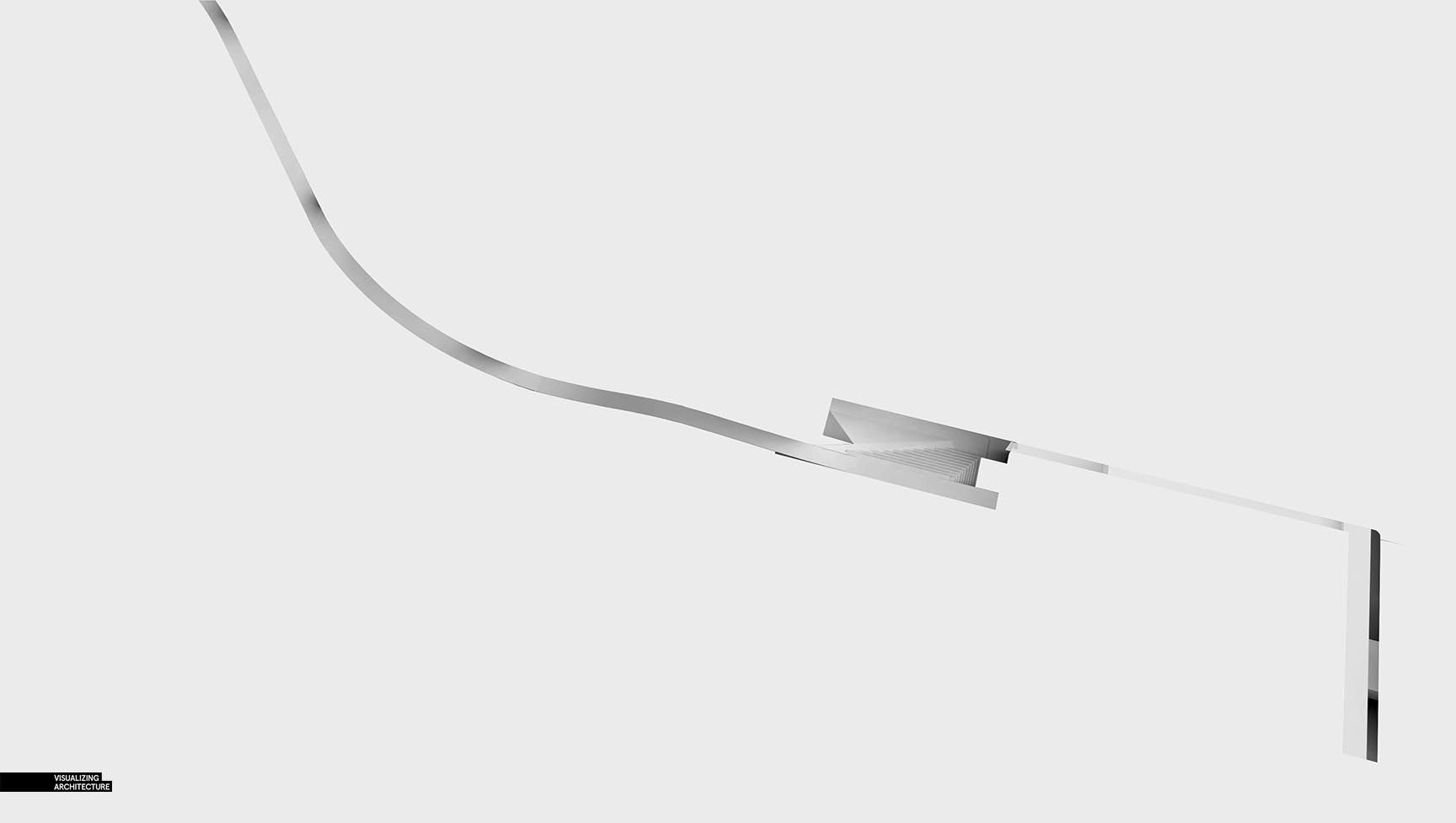 Next, I took the clay model rendering and cut that same section out. I would suggest using smart objects and masks, but for now, we will keep this super simple. 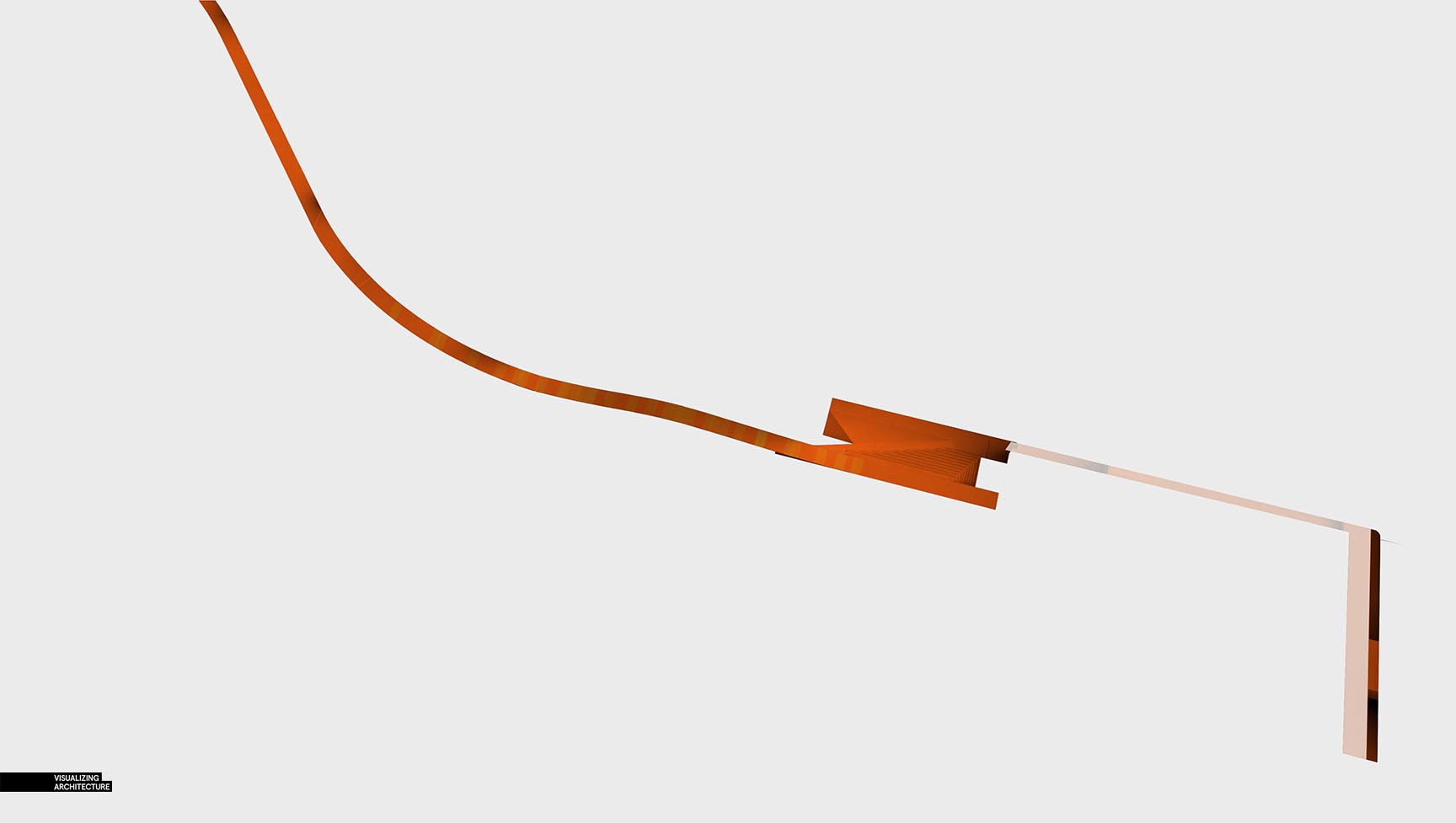 I then took the clay model section and set the layer blend mode to “Multiply” on top of the color to give it some shade and shadow. 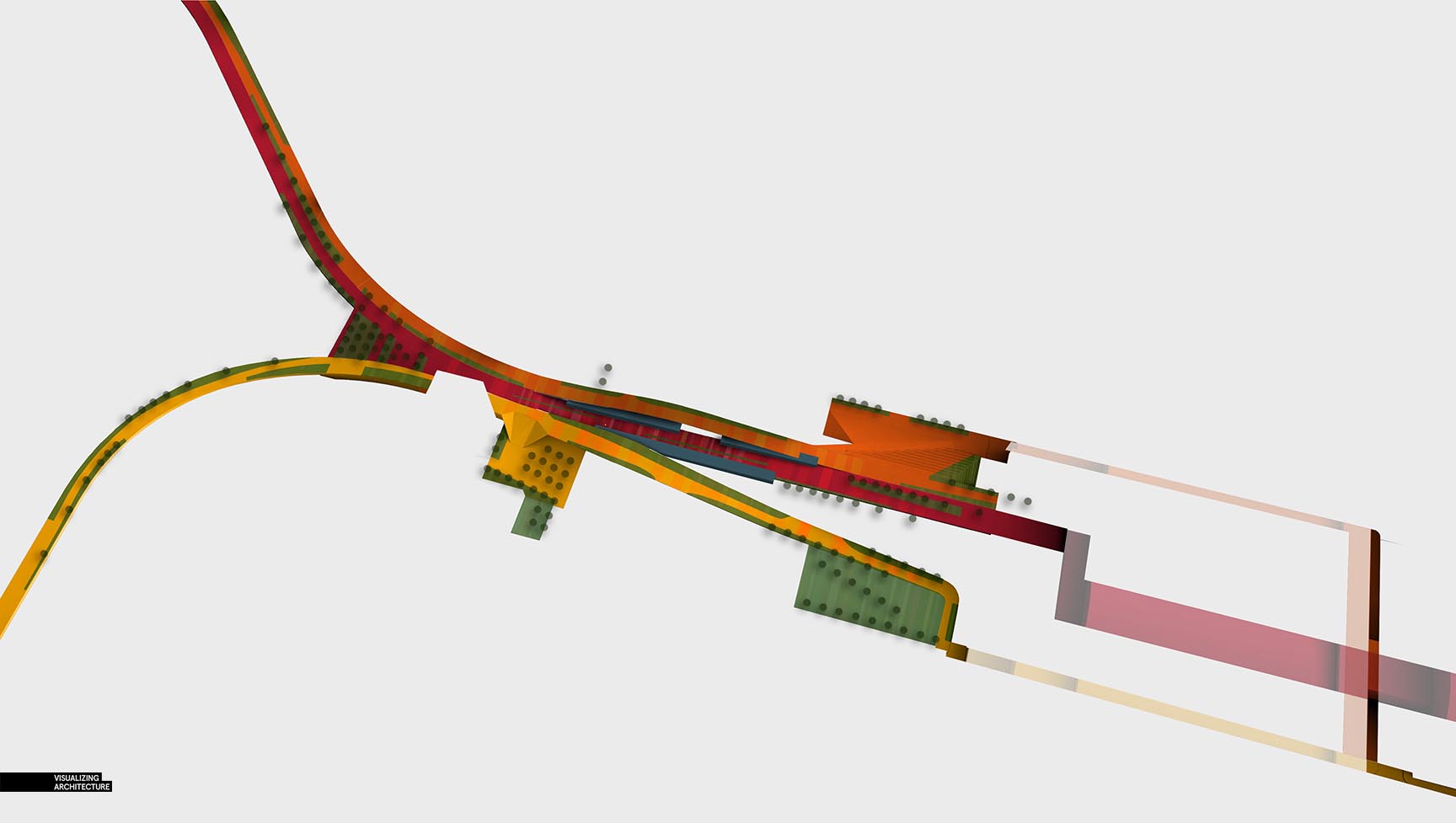 I repeated these steps for each color which will allow me to make quick edits or experiment with color later on as needed. 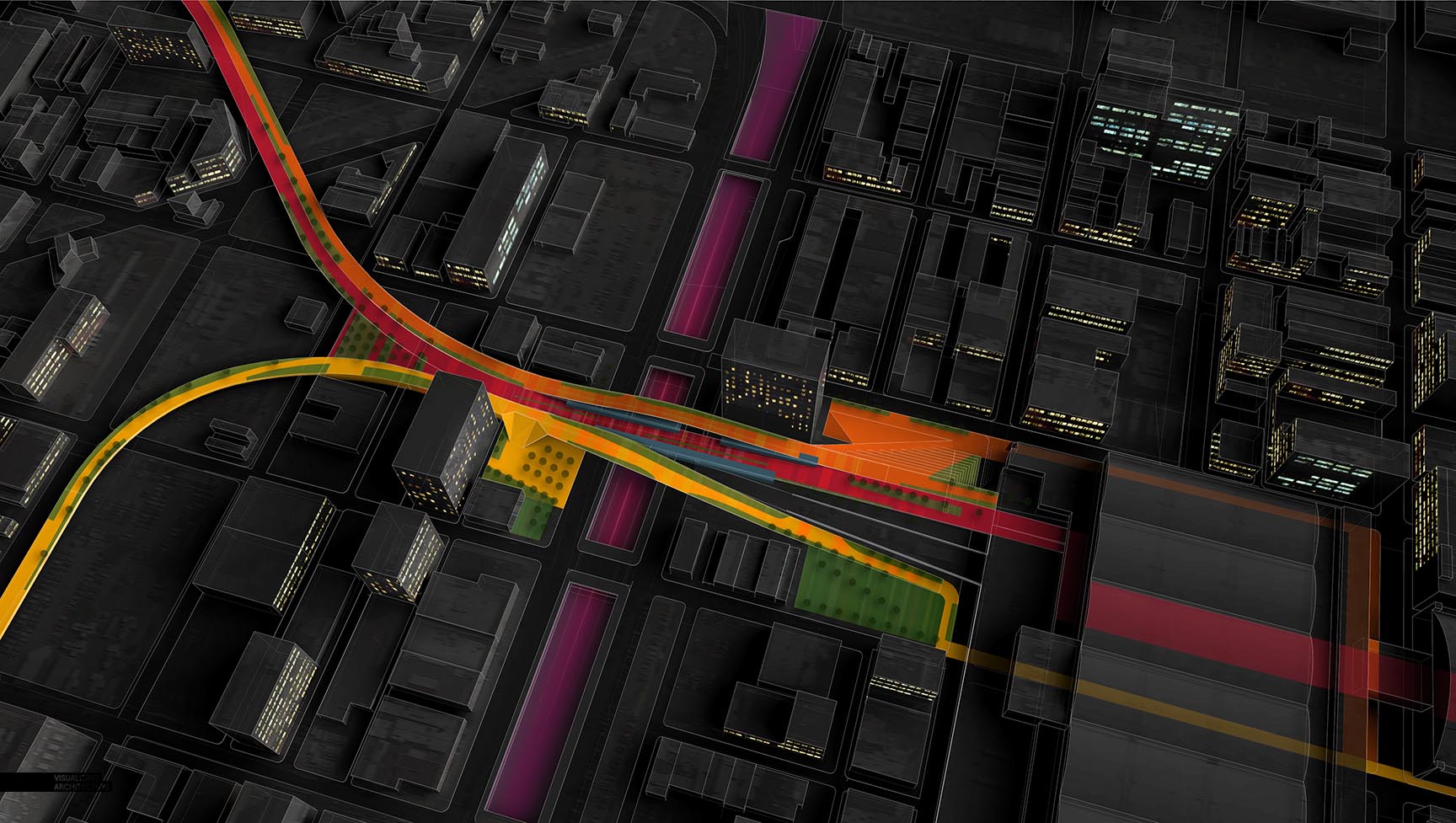 Finally, I moved the white line work layer above the new color groups to give each zone a white outline. 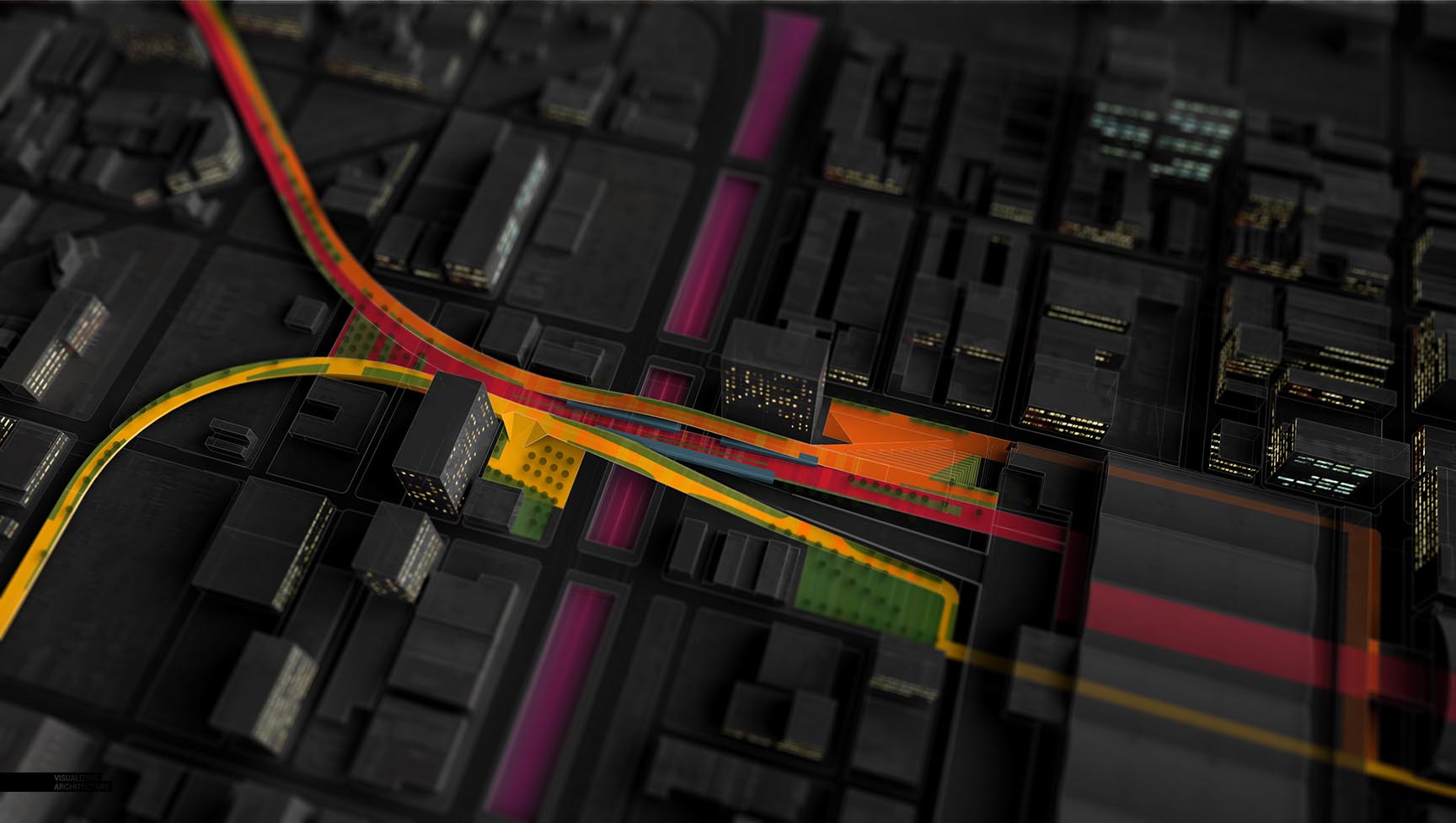 I added a simple lens blur to draw attention to the center of the image. A tutorial on this step can be found here. 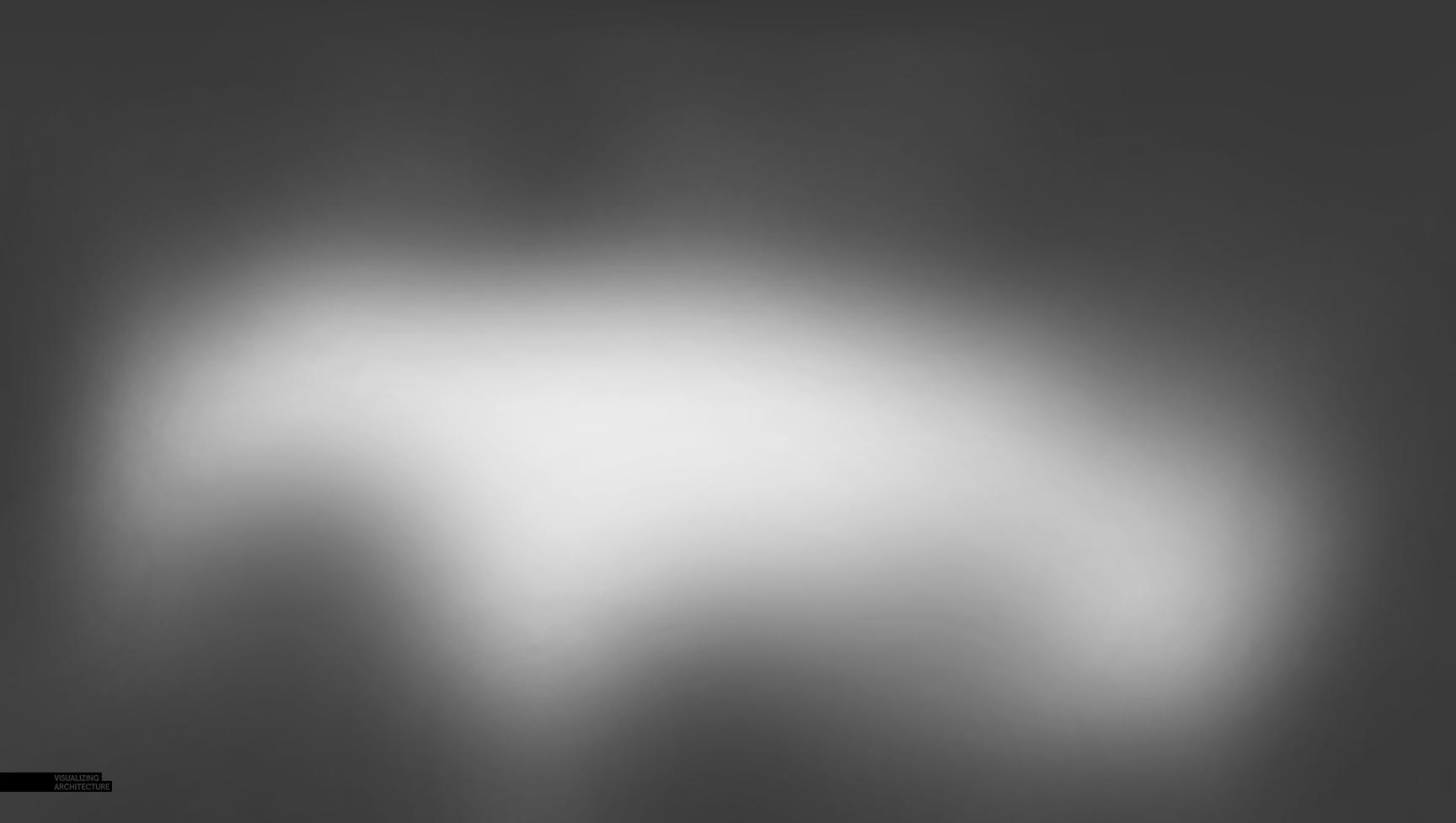 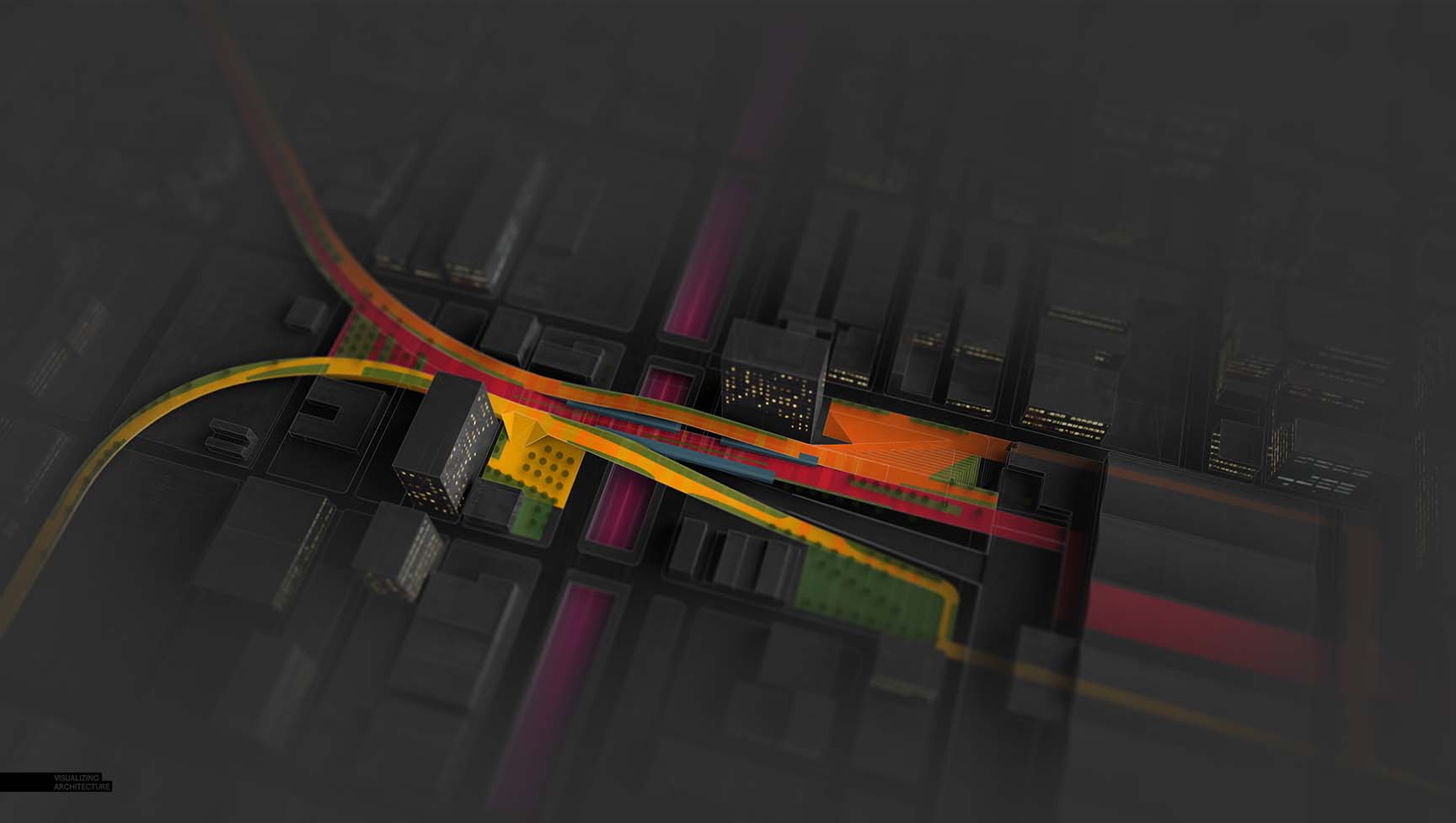 Similar to the lens blur, I painted in some fog to again draw the eye to the center of the image. This also tones down the context and will give me some space to add annotations and descriptions for the diagram. 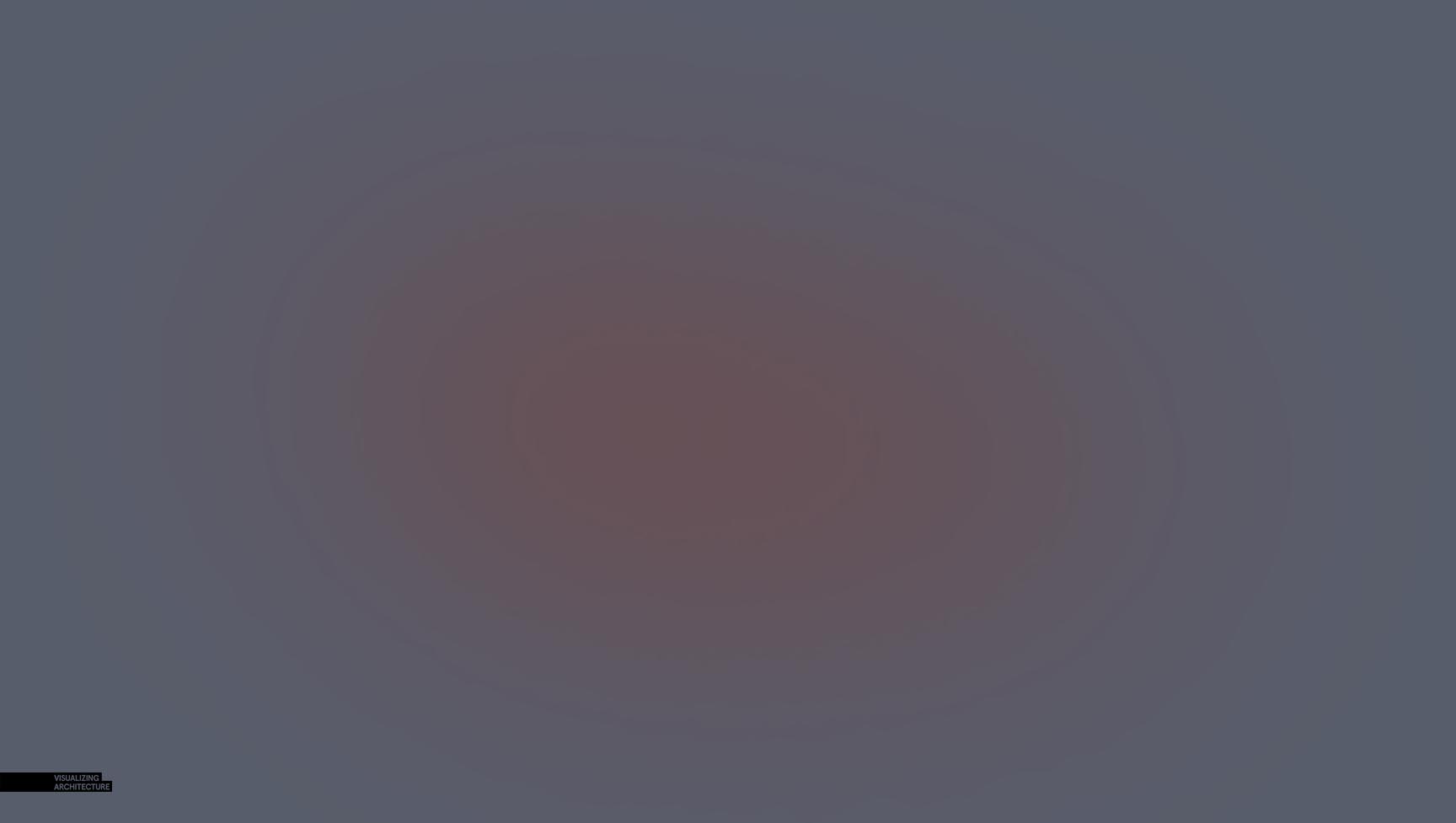 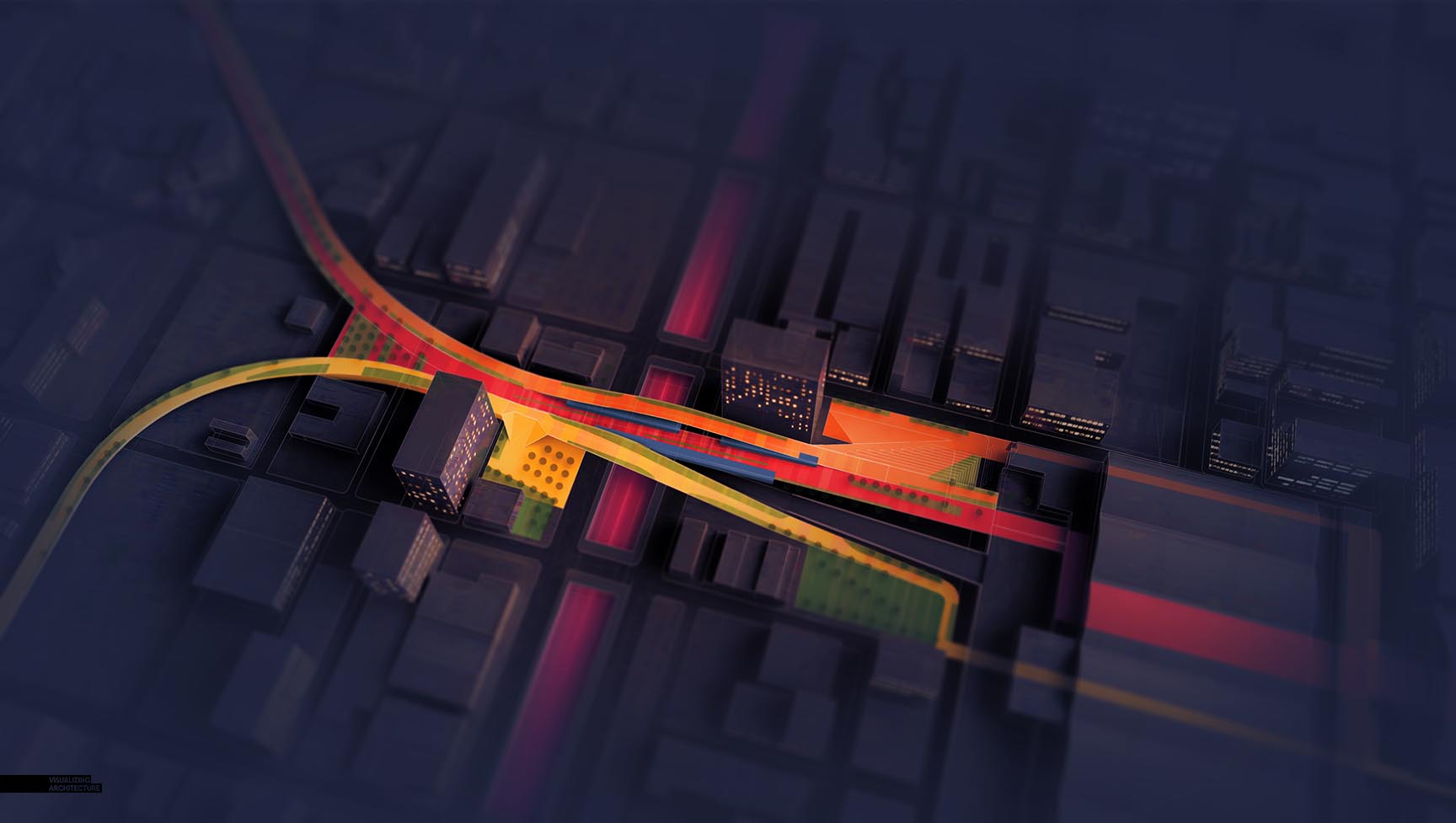 Finally, the image was looking too desaturated, so some blue and orange color overlays were added. As mentioned earlier, this will be used to study my design and help clarify the concept. Once I get close to the portfolio, I will add some annotations and color keys. 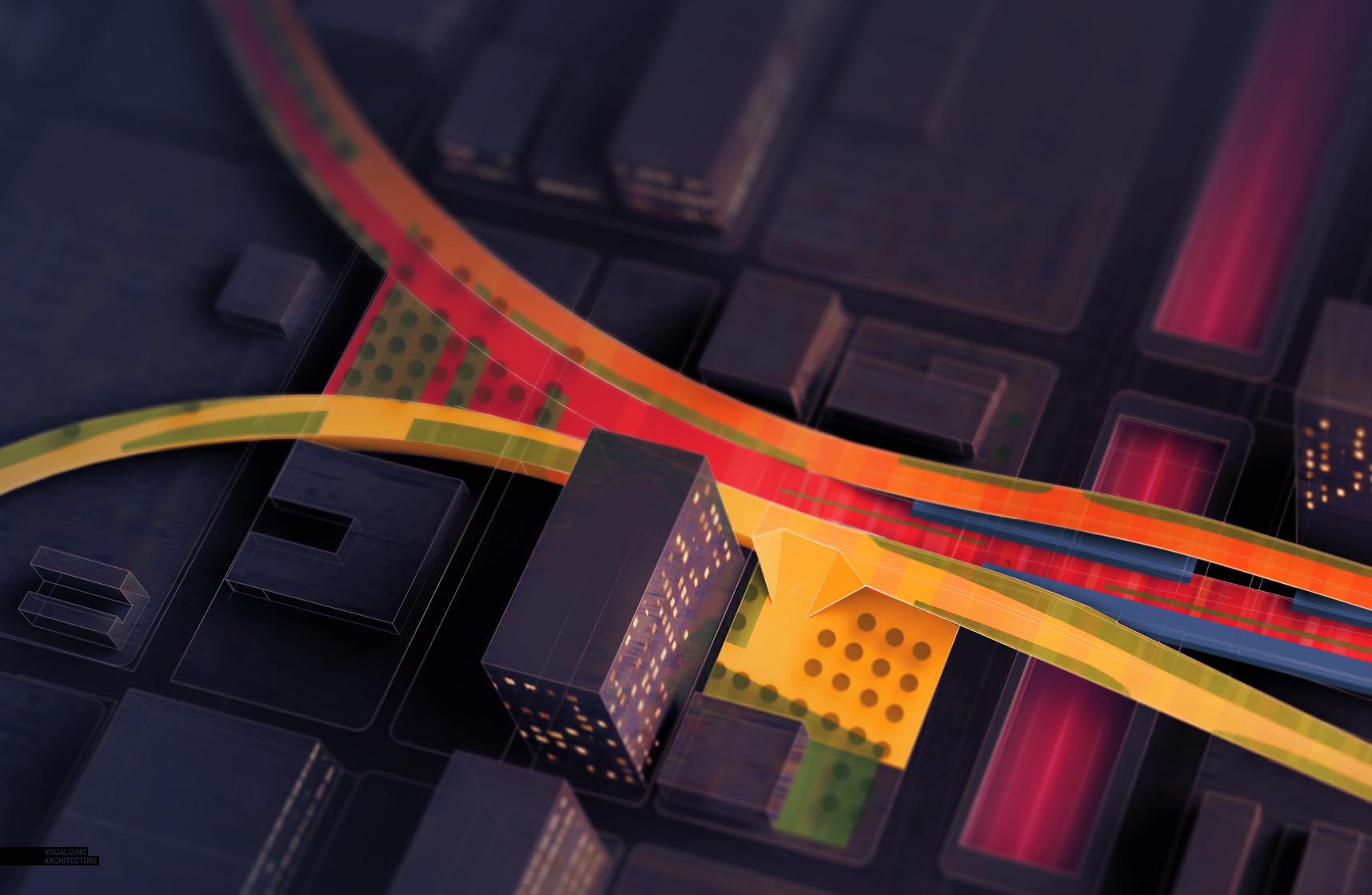 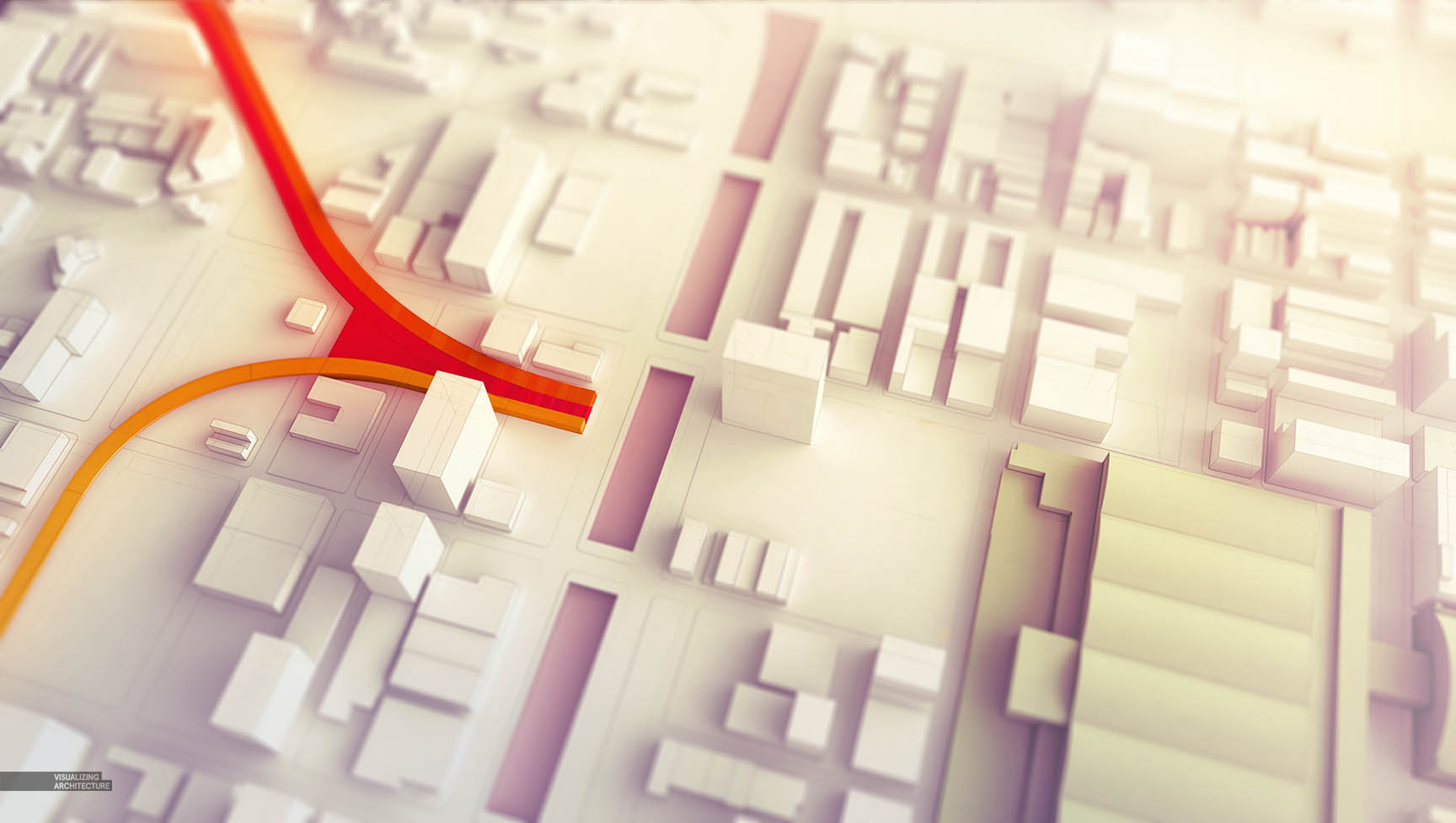 Using the same base renderings and Photoshop moves, I tweaked the colors and atmosphere to generate a base illustration for the existing conditions diagram. 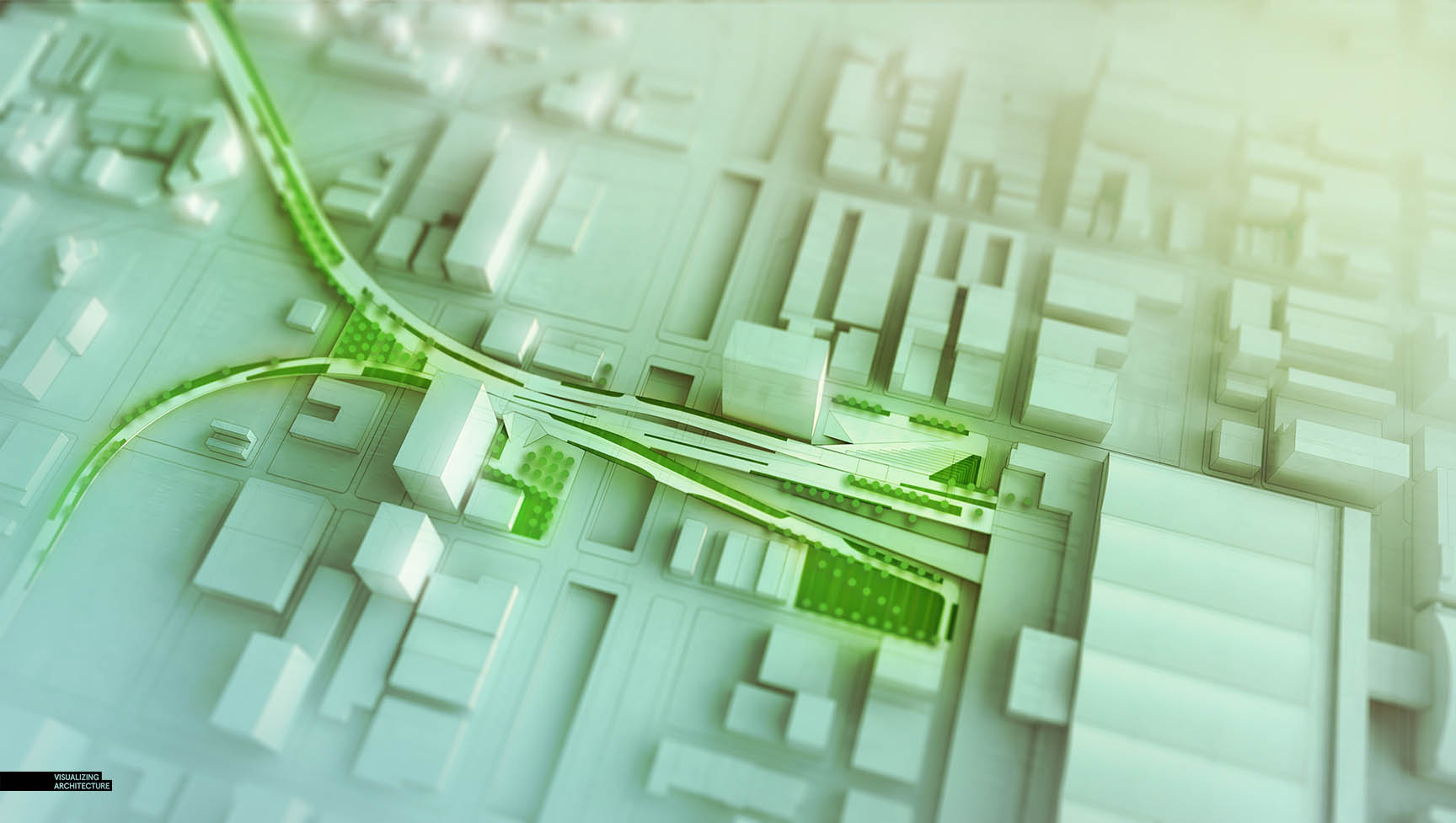 As well as a green spaces diagram.