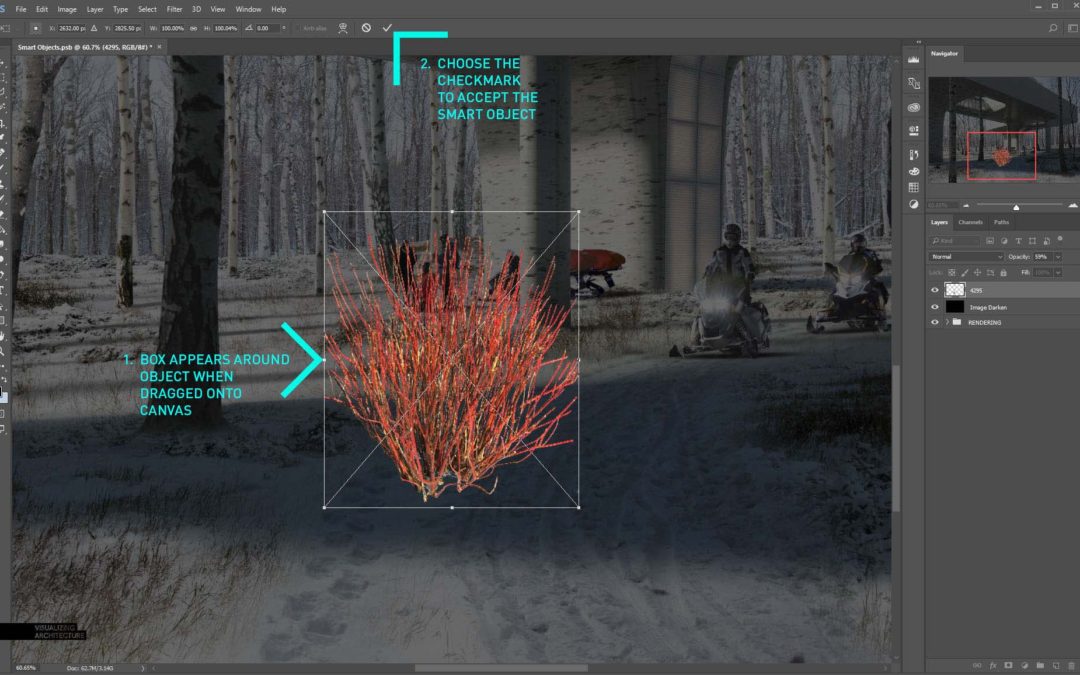 It has been a while since I have created a good ole tutorial. This is a really important one if you don’t already know or use Smart Objects in Photoshop. Smart Objects bring a whole new level of ability to edit in Photoshop. At Design Distill, we use them in every image we create. They have streamlined how fast we can create images, and more importantly, allow editing to be much quicker, cleaner, and consistent. Smart Objects take some getting use to and have some limitations, but are something everyone should be integrating into their workflow. Below are a few examples of how they can be used.

So what is a Smart Object in Photoshop? When you create a Smart Object, you are telling Photoshop to save the original characteristics of the source image. When you edit a Smart Object such as adjusting the levels or hue/saturation, Photoshop will turn these into Smart Filters allowing you to undo these changes later. Scaling and distorting a Smart Object also does not degrade the layer as shown a little later on. Another advantage is that copies of Smart Objects create instances of each other. This is similar in concept to how blocks work in AutoCAD or components in Sketchup. Updating one instance will update them all. Most importantly, changes to a Smart Object are non destructive which is crucial for sharp and editable Photoshop files. 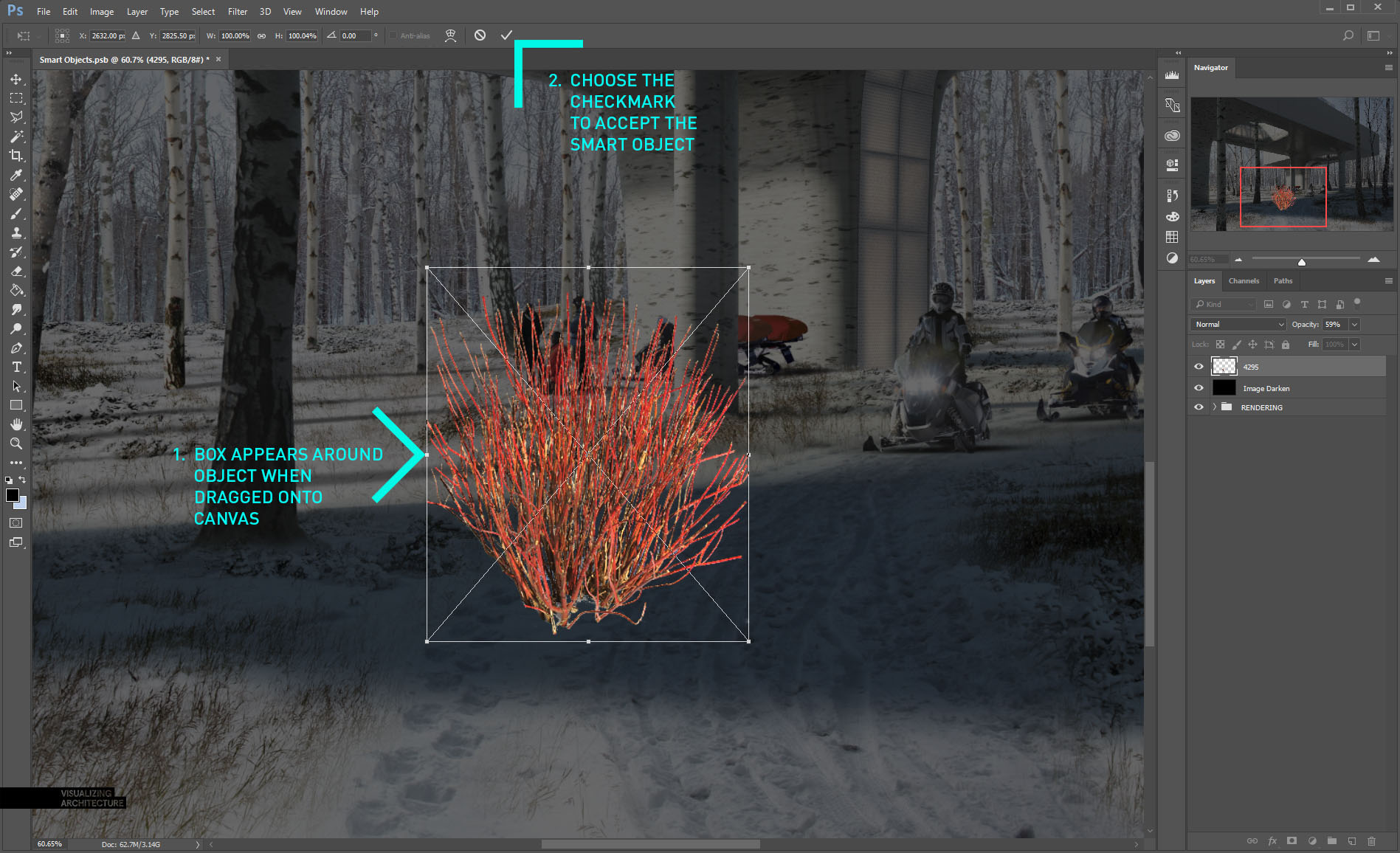 There are a few ways to create a Smart Object. The first is by simply dragging a file directly into a Photoshop file. I am using Photoshop CC so this method may not work on older versions of Photoshop. When you drag an image file such as a .jpeg or .png into an open Photoshop file, the image will come in as a Smart Object and have a bounding box around it. Hit the check mark at the top to accept the Smart Object into the file. 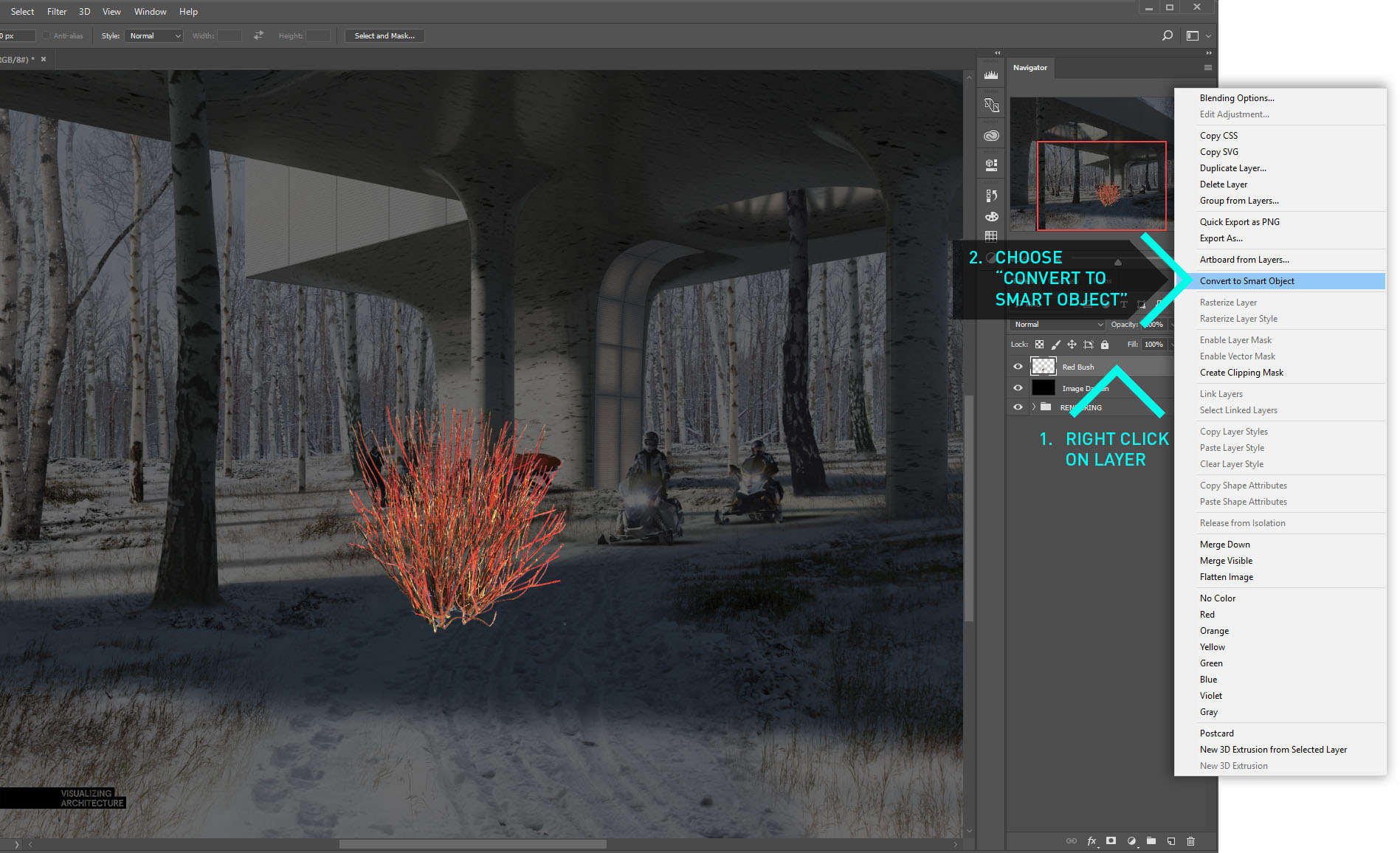 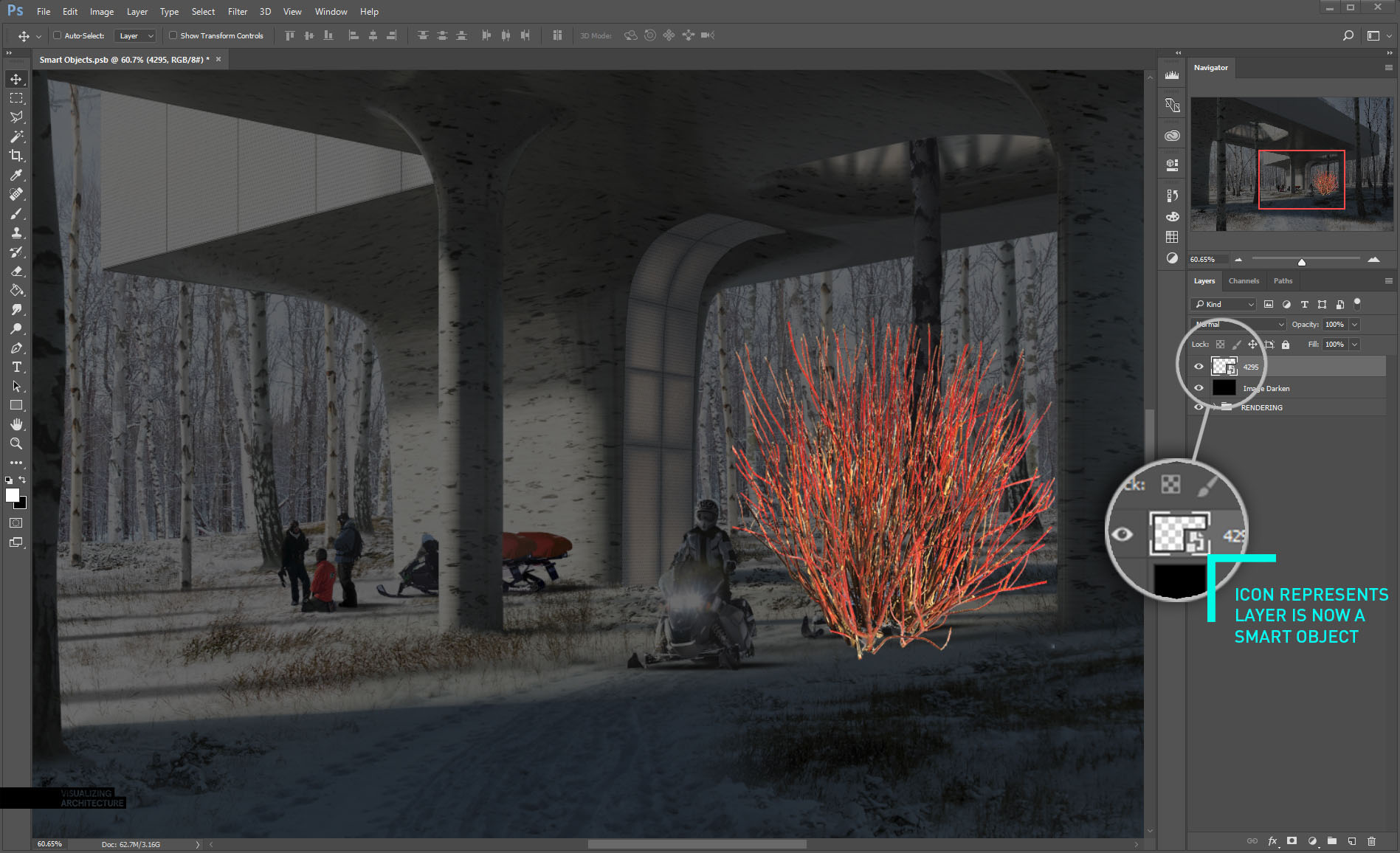 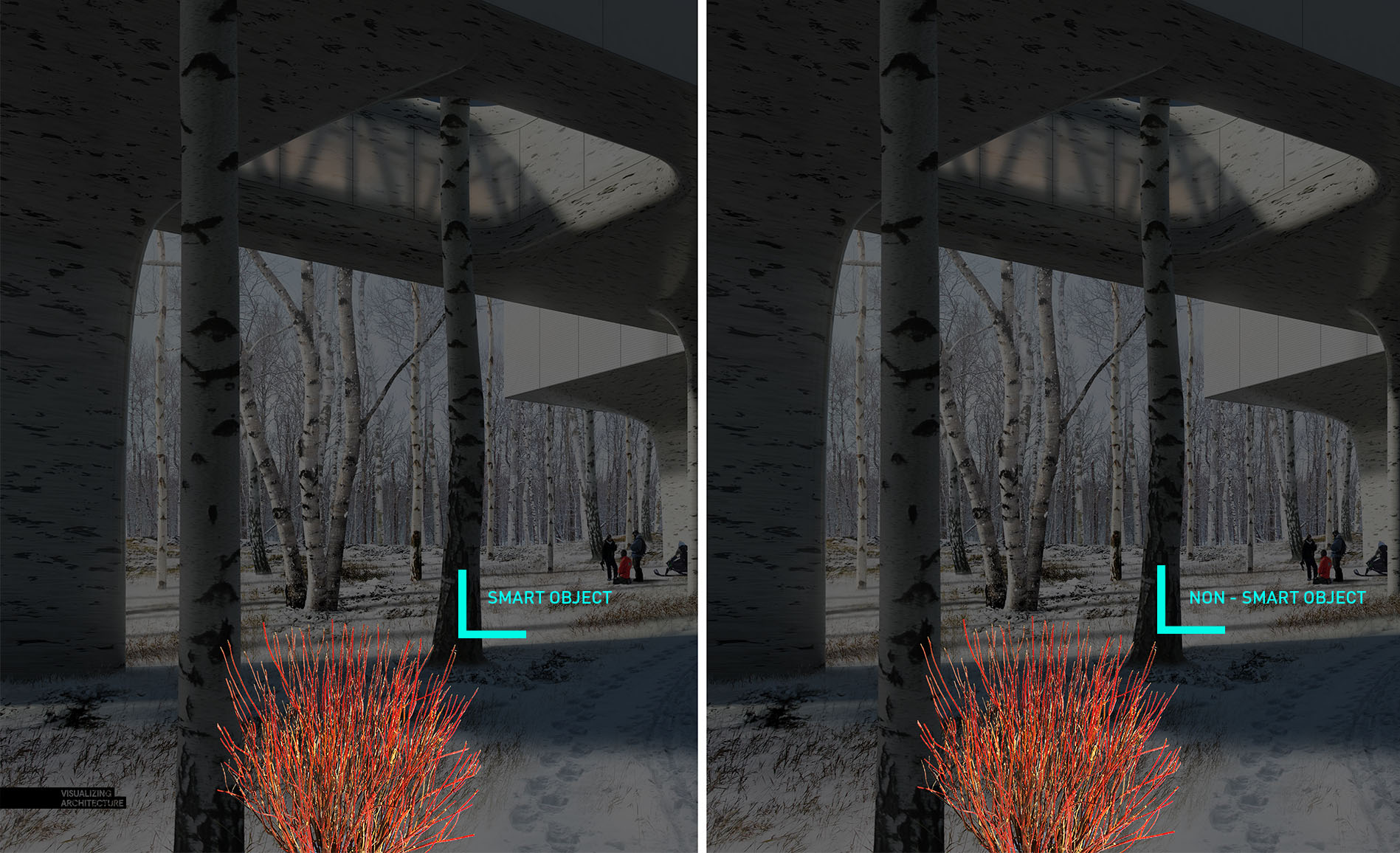 Scaling is one of the biggest reasons to use Smart Objects in Photoshop. This example shows two red bushes, one is a Smart Object, the other is just a simple rasterized Photoshop layer. 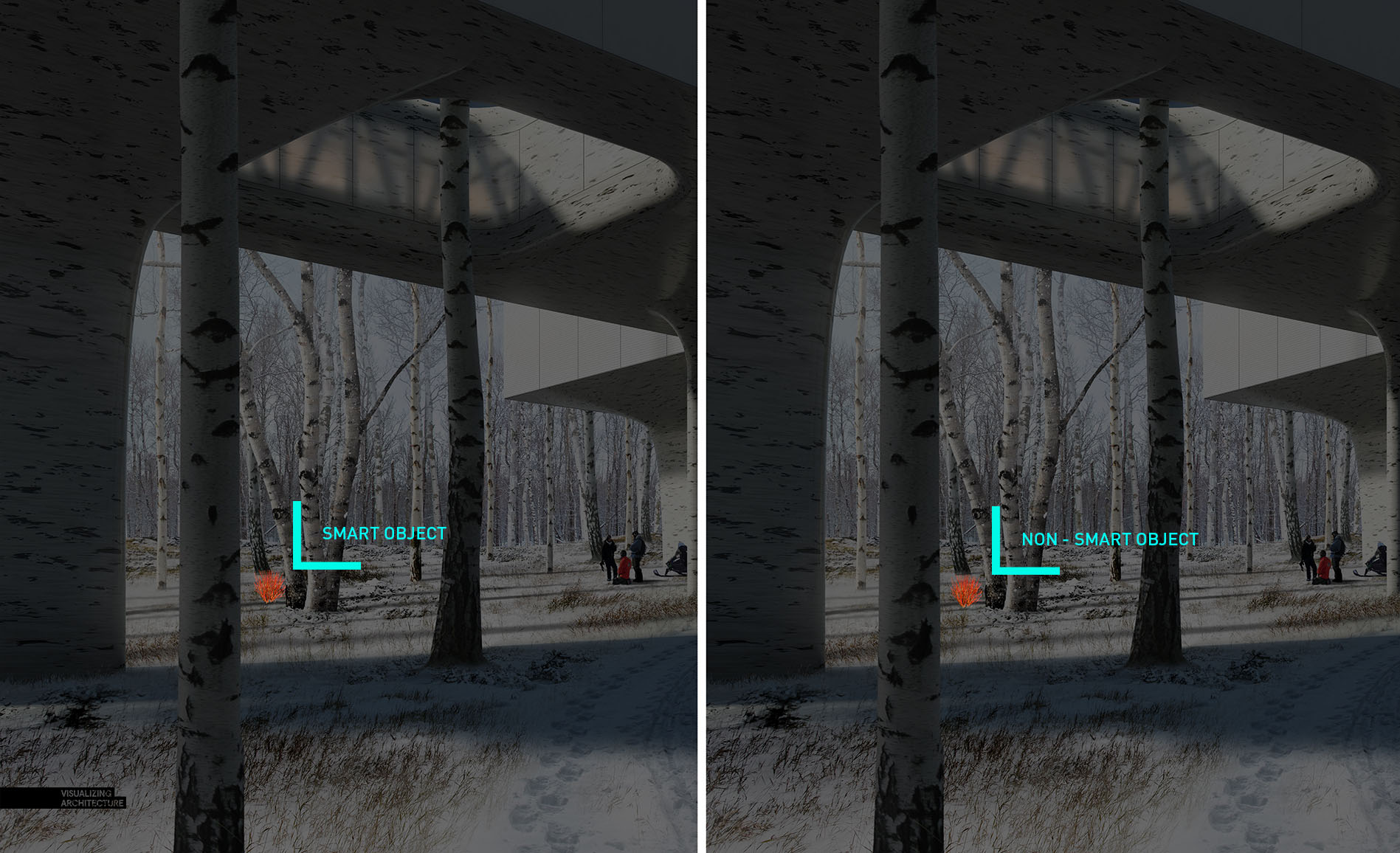 Often in architectural visualization, objects such as plants and entourage are scaled many times when trying to place them in a composition. In this case, I decided to push the red bush into the distance, thus I needed to scale it much smaller. 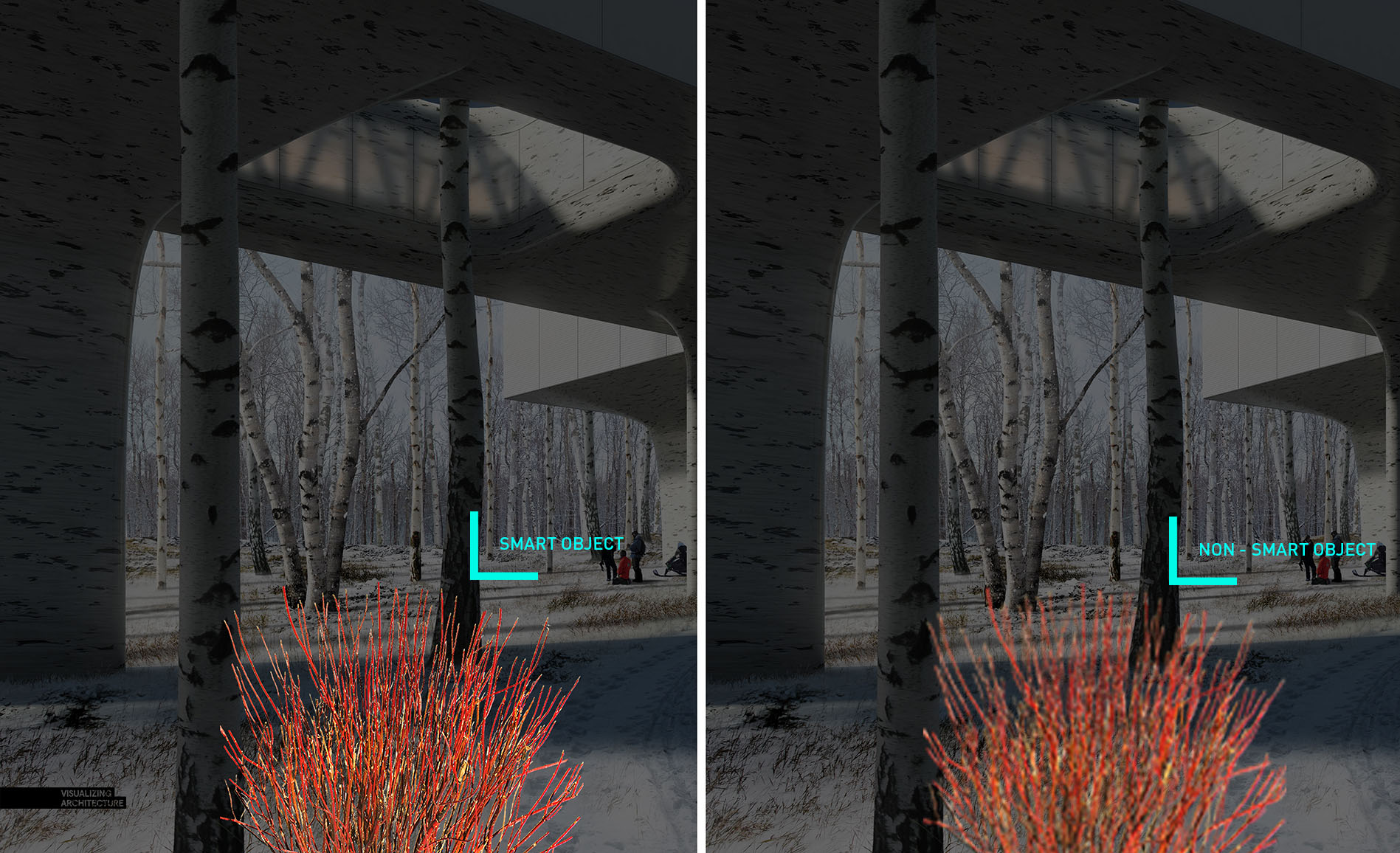 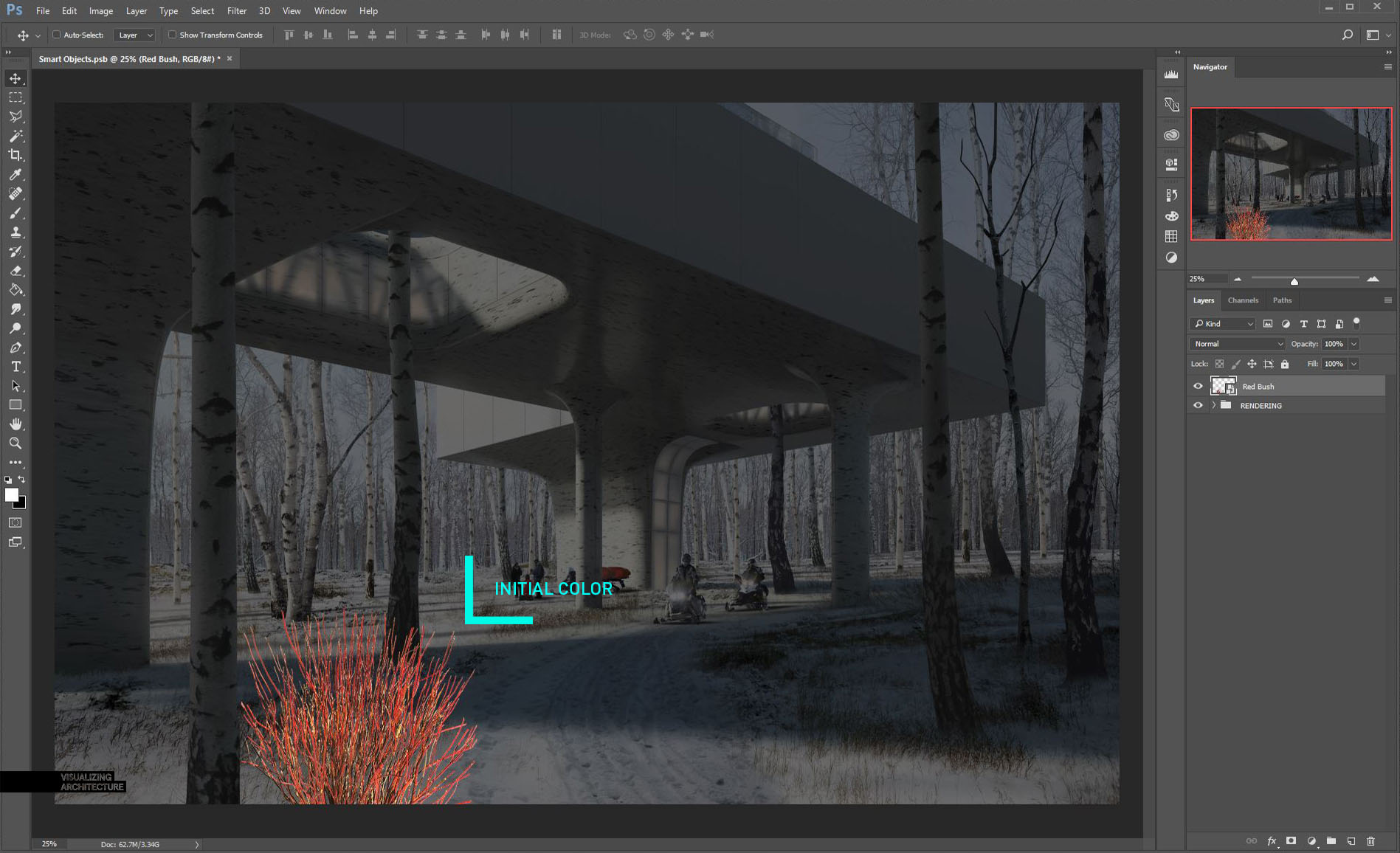 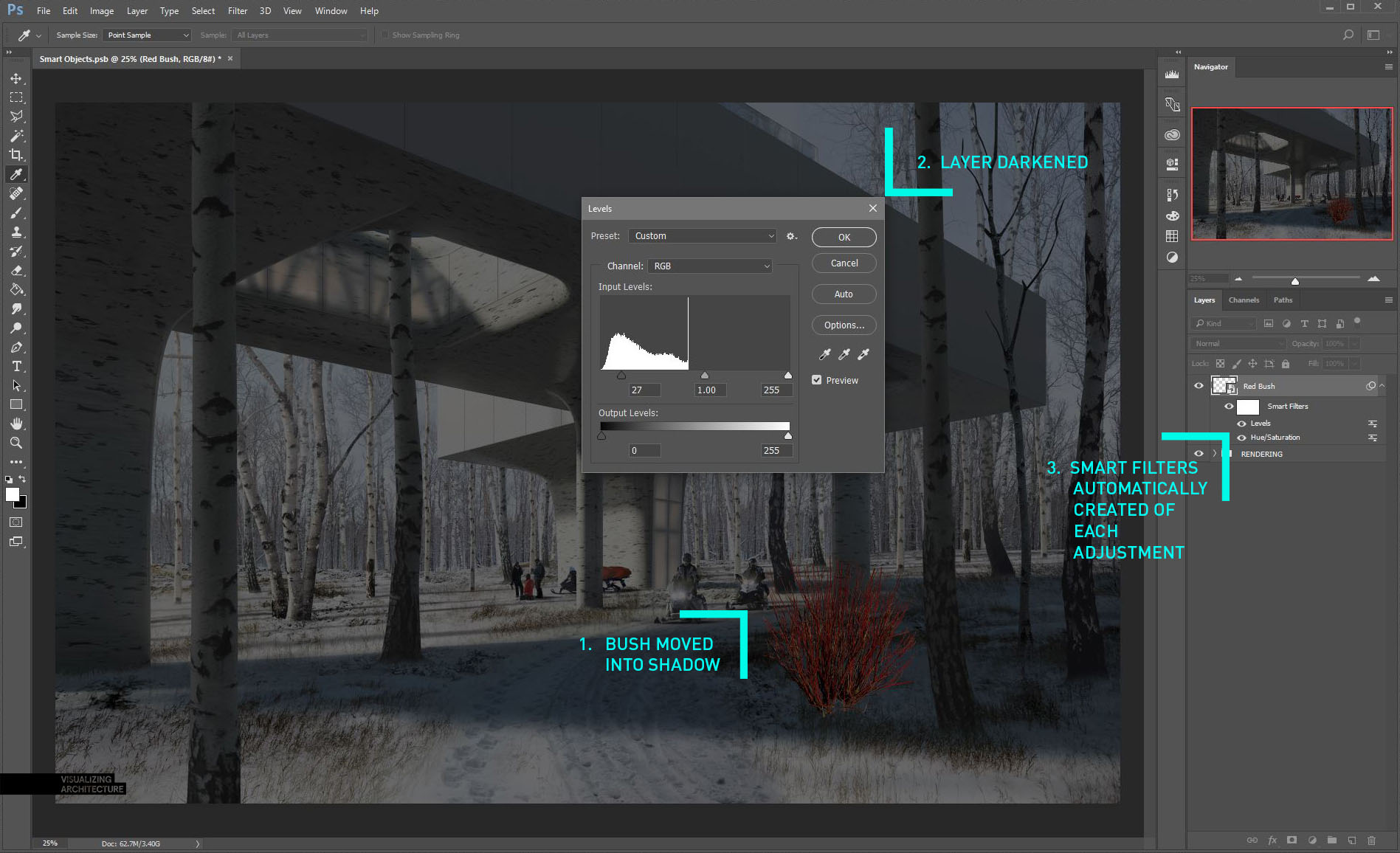 Later on, I decided to move the bush into the shadow, so I darkened the bush using “Hue/Saturation” and I adjusted the “Levels”. You will notice under the “Red Bush” layer in the Layers Palette, that these adjustments appeared in the order in which they were created. 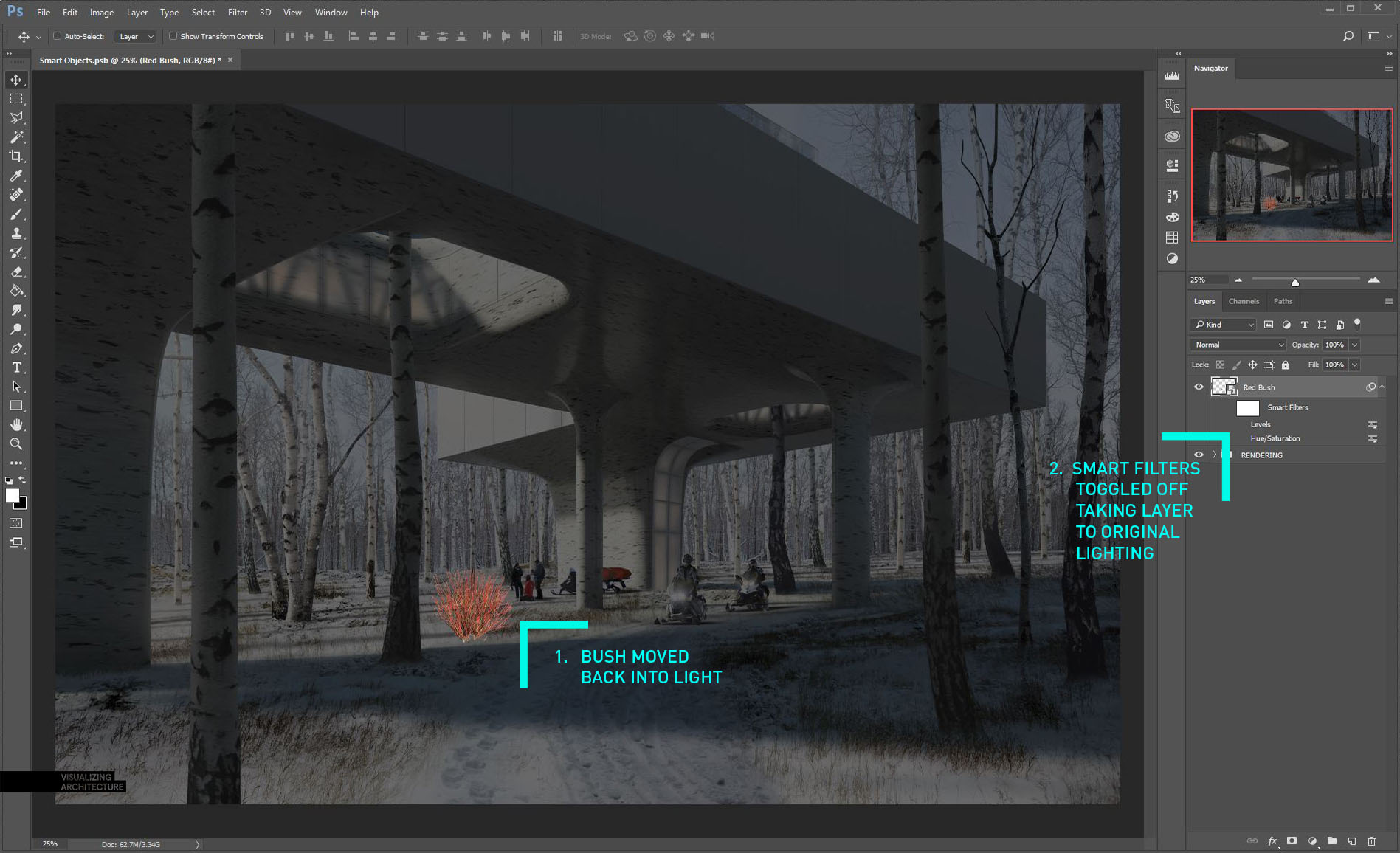 Later, I again decided to move the bush back into the light. I wanted to revert back to the original tones of the bush, so I simply turned off the Smart Filters. You could also delete the filters altogether. If the bush was not a Smart Object, it would have been very difficult to get the color back to its original tones and I would have most likely needed to reinsert it again. 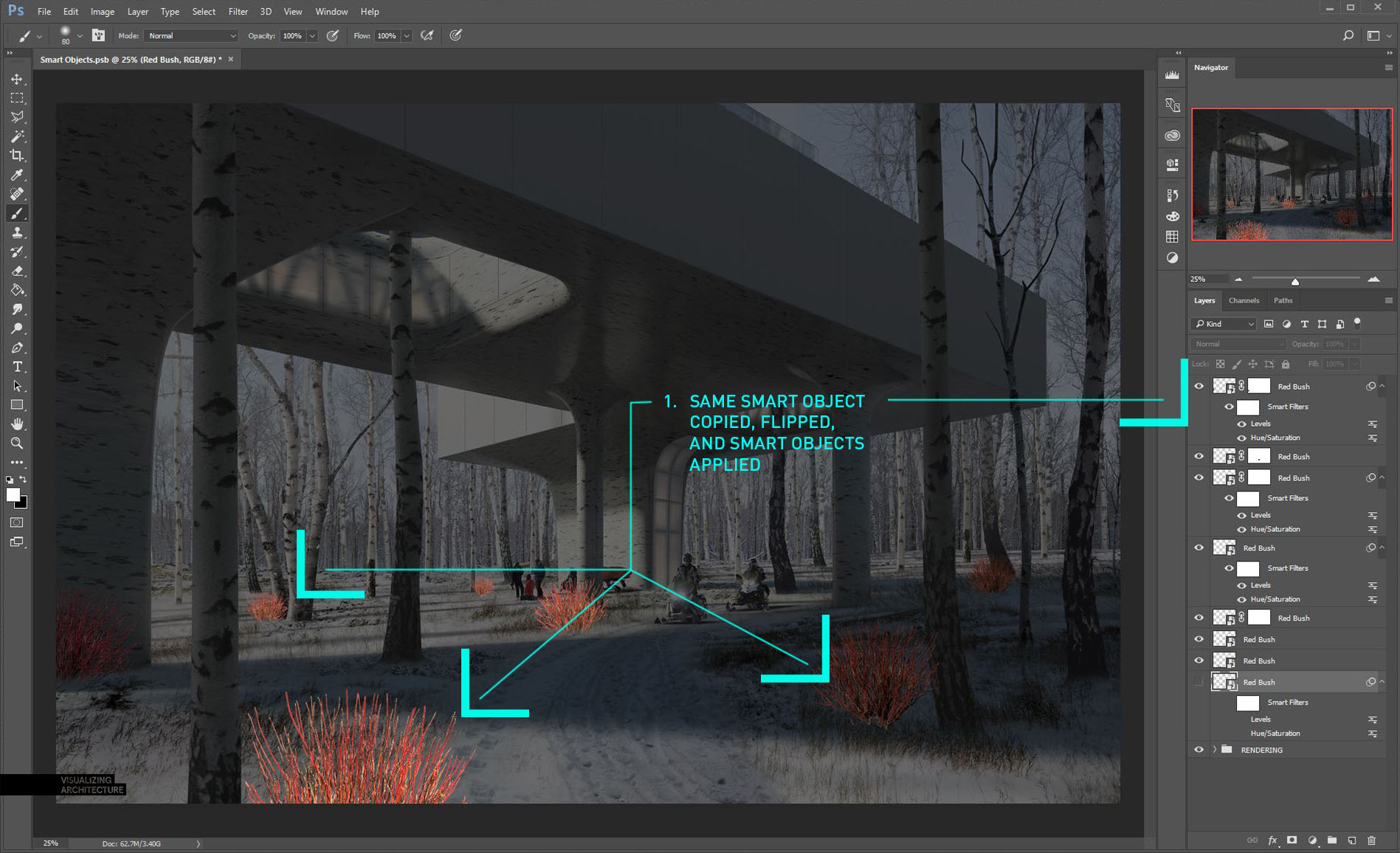 You can use Smart Objects as instances of one of another similar in concept to blocks in AutoCAD or components in Sketchup. This means after a Smart Object has been copied several times, the image can be replaced with a new image, and all of the instances of that Smart Object will automatically get updated. In this example, I copied the red bush several times by holding down the “Alt” key, clicking and dragging. For the bushes in the shadows, I added some Smart Filter adjustments to darken them. I also horizontally flipped the bush on several occasions. 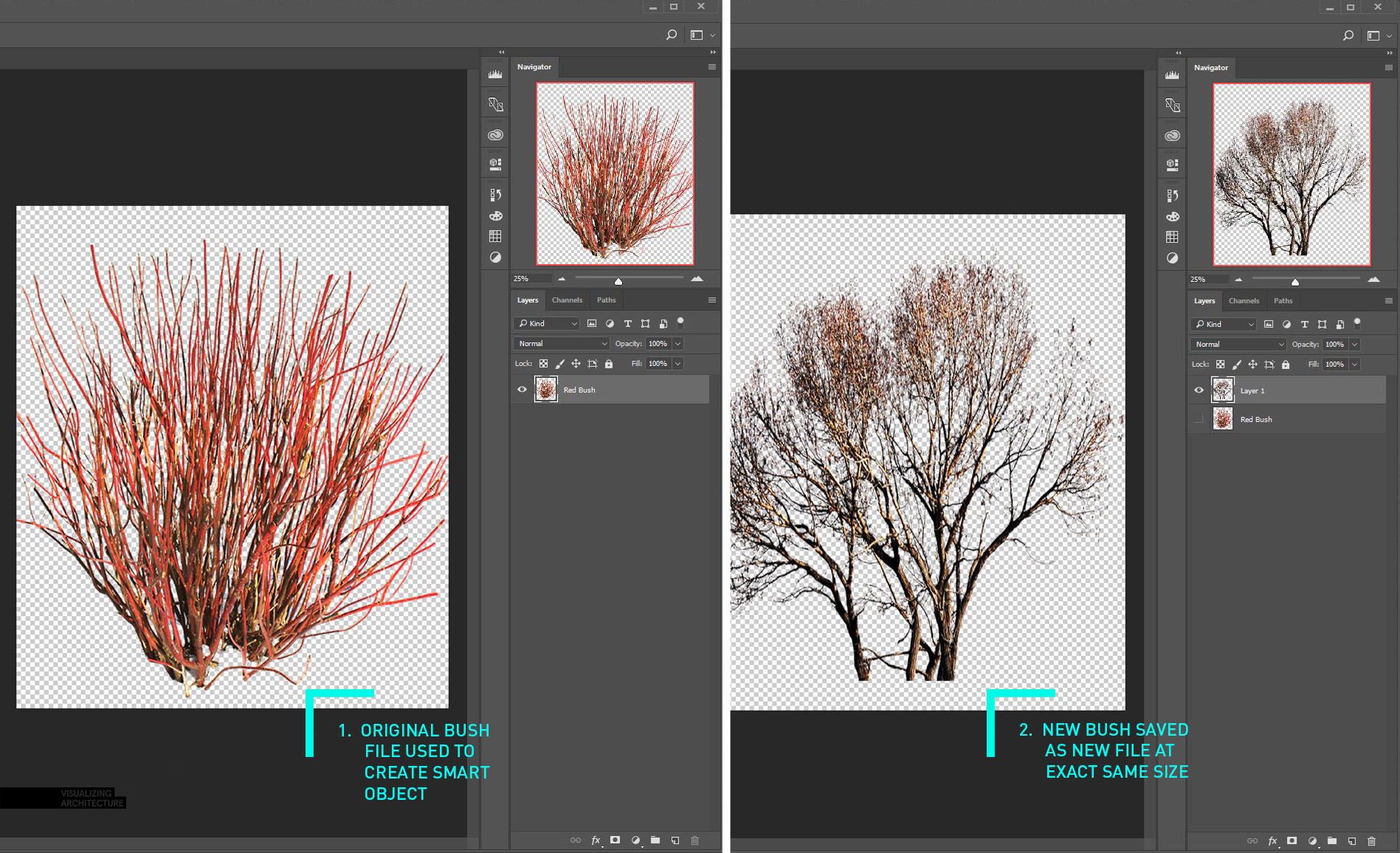 Next, I want to replace the red bush with a brown bush. To do this, I first opened the original red bush image, turned it off, and brought in the new brown bush. I then save the brown bush as a new file. It is important that the new image file is exactly the same size in pixels to the original image file used to create the Smart Object. 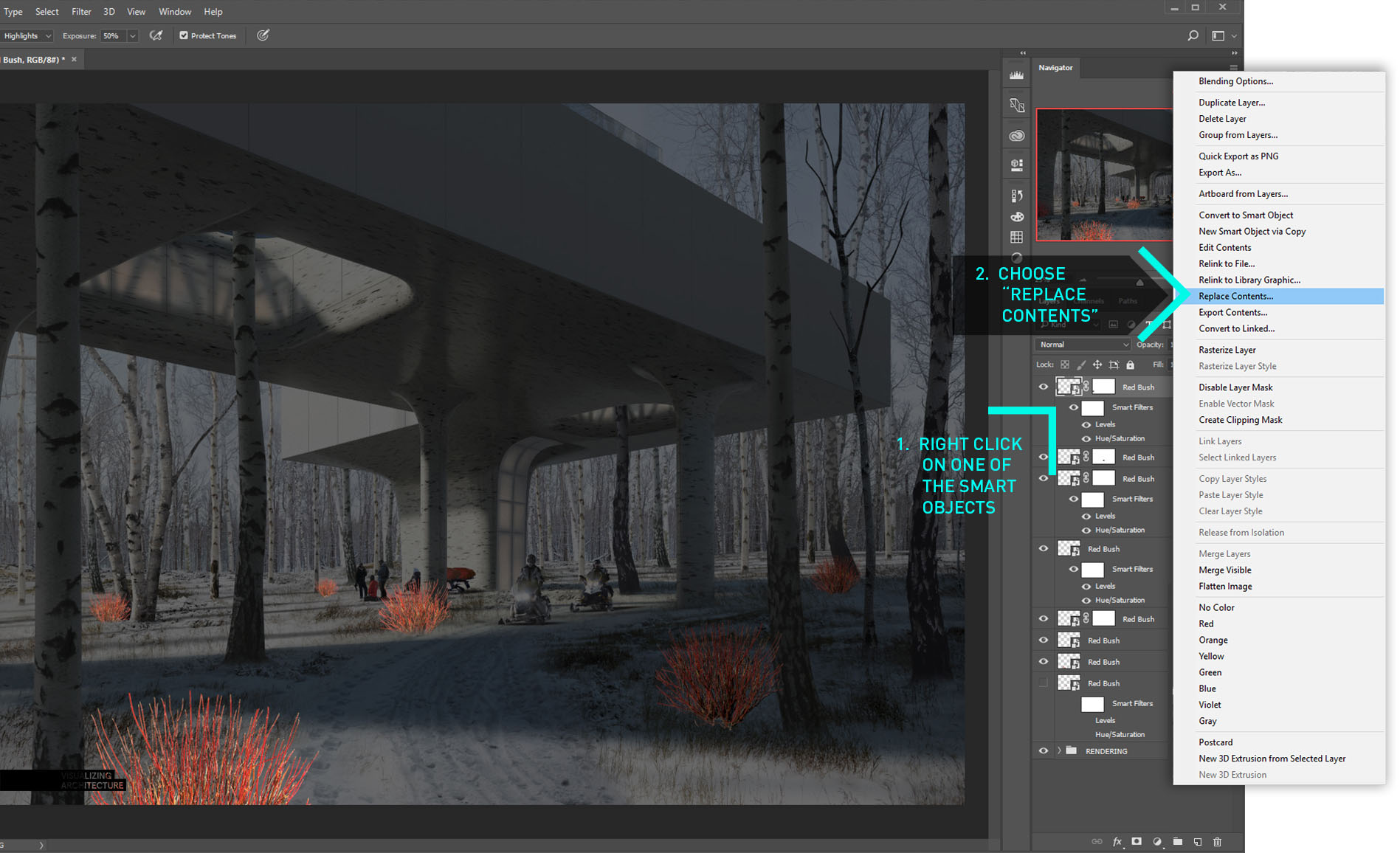 Back in the illustration file, right-click on one of the Smart Object instances in the layers palette, and choose “Replace Contents”. In the pop-up window, browse to the new image that will replace the current Smart Object file. In this case, I am browsing to the new brown bush file. 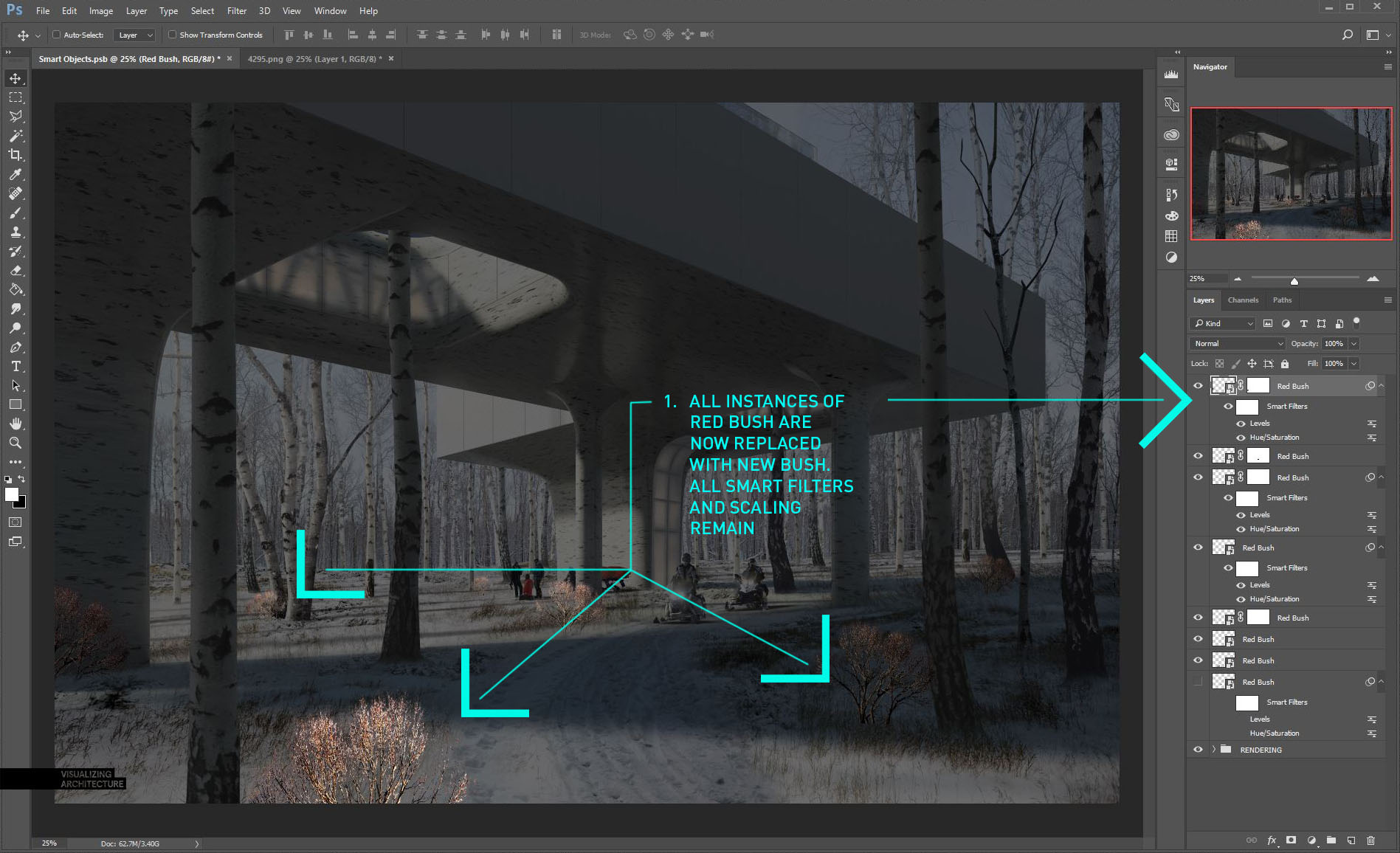 All instances of the red bush have now been replaced with the brown bush. All of the scaling, Smart Filters, and horizontal flipping remain.

6. Turning your base files into Smart Objects 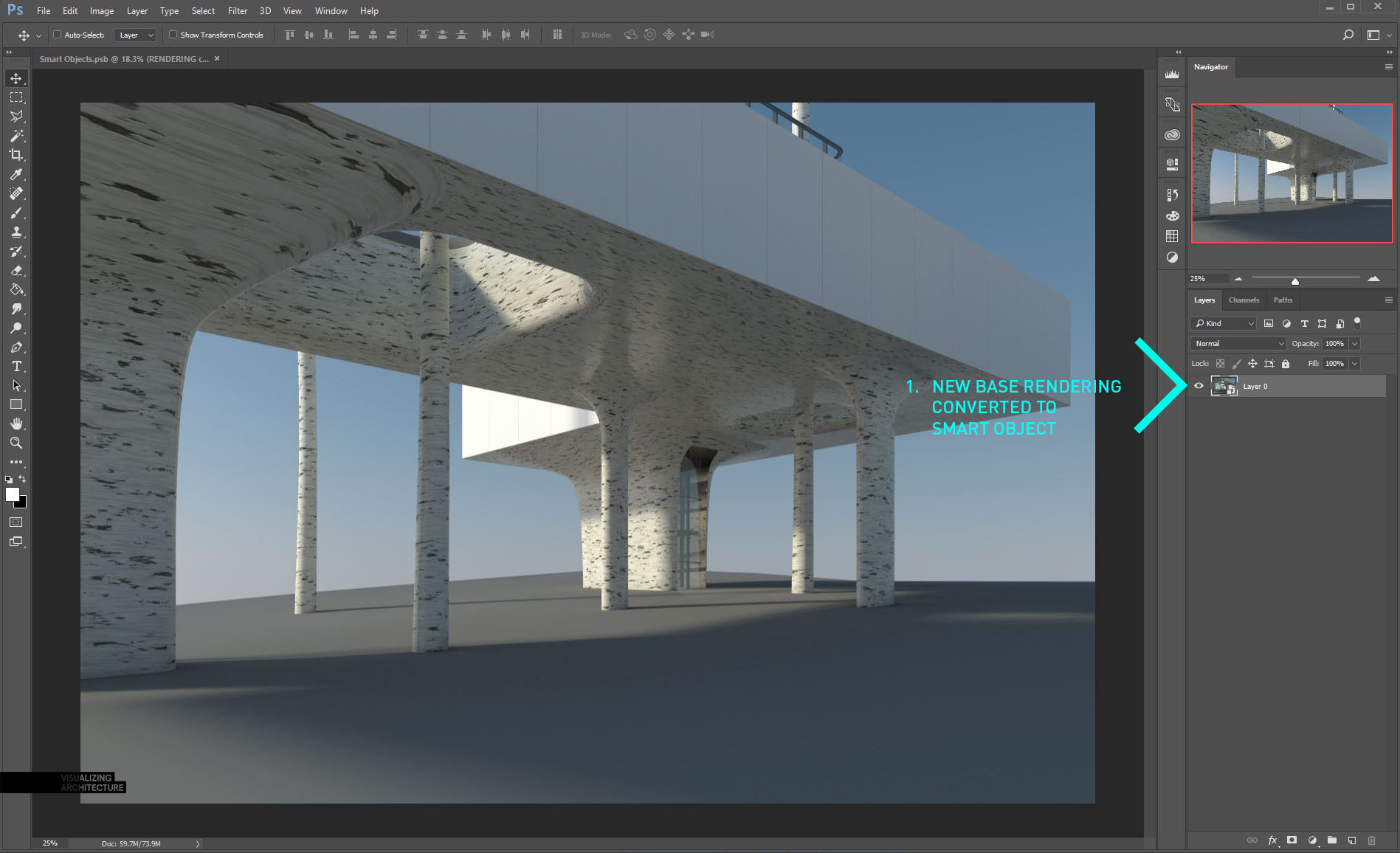 Bringing in all of your base rendering files as Smart Objects can save a lot of time later on down the road if you plan on making a lot of edits. For one, there are many times when the base renderings need to be distorted to match a photograph or drone image. It can be next to impossible to exactly match how a base rendering is distorted with a new updated rendering. With Smart Objects, this is no longer a problem. At Design Distill, we are constantly making changes to the model, and then rerendering new base files to be updated in Photoshop. Using Smart Objects, we simply replace the old base files with the new ones and all of the color adjustments and scaling gets carried over. In this example, I have brought in a base rendering of my research lab design. The first thing that I do is turn it into a Smart Object by right-clicking on the layer name and choosing “Covert to a Smart Object”. 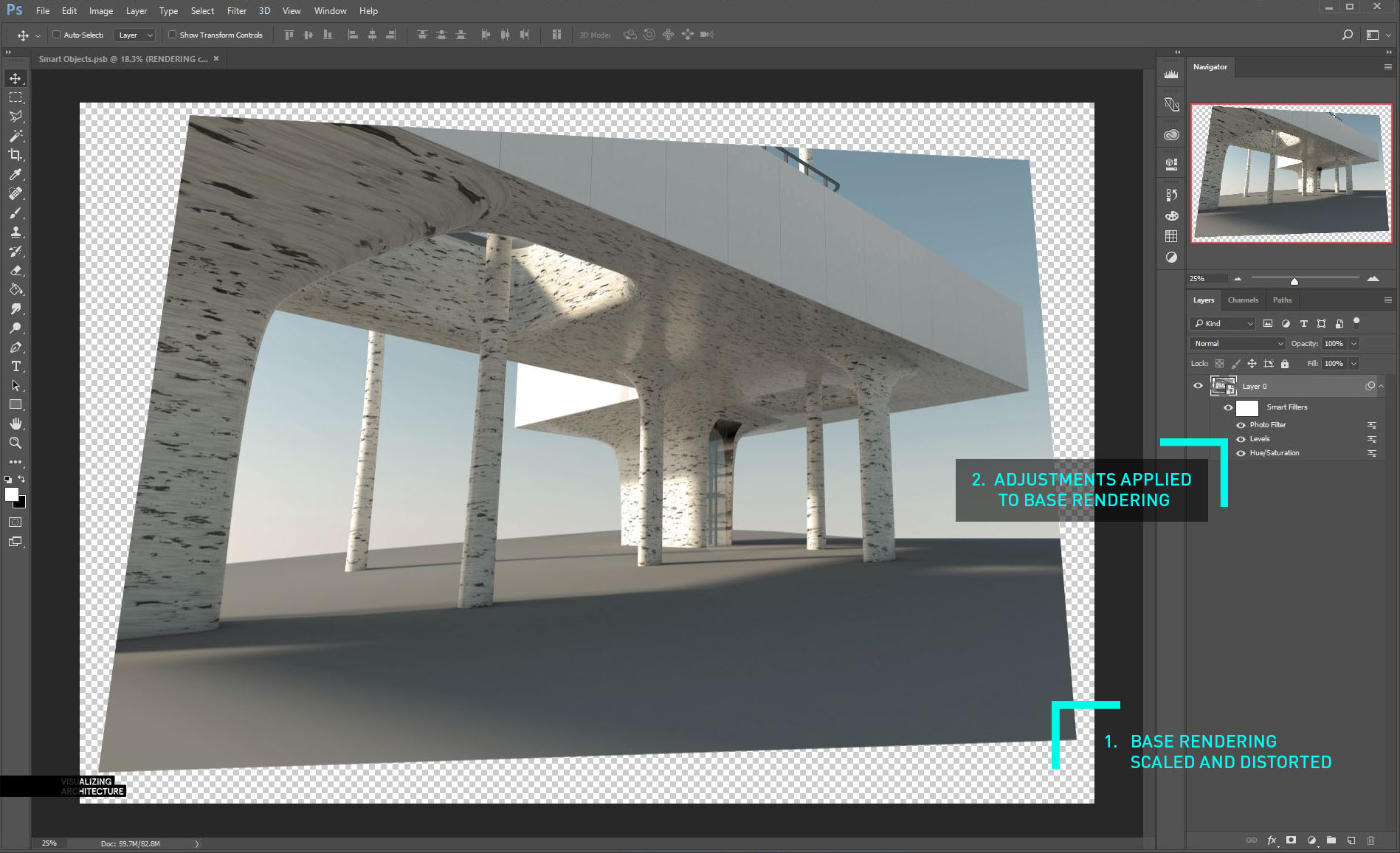 Next, I distorted the base rendering similar to how I would if I was trying to match it to an existing site photo. I also added some color adjustments which are shown as Smart Filters underneath the layer in the Layers Palette. 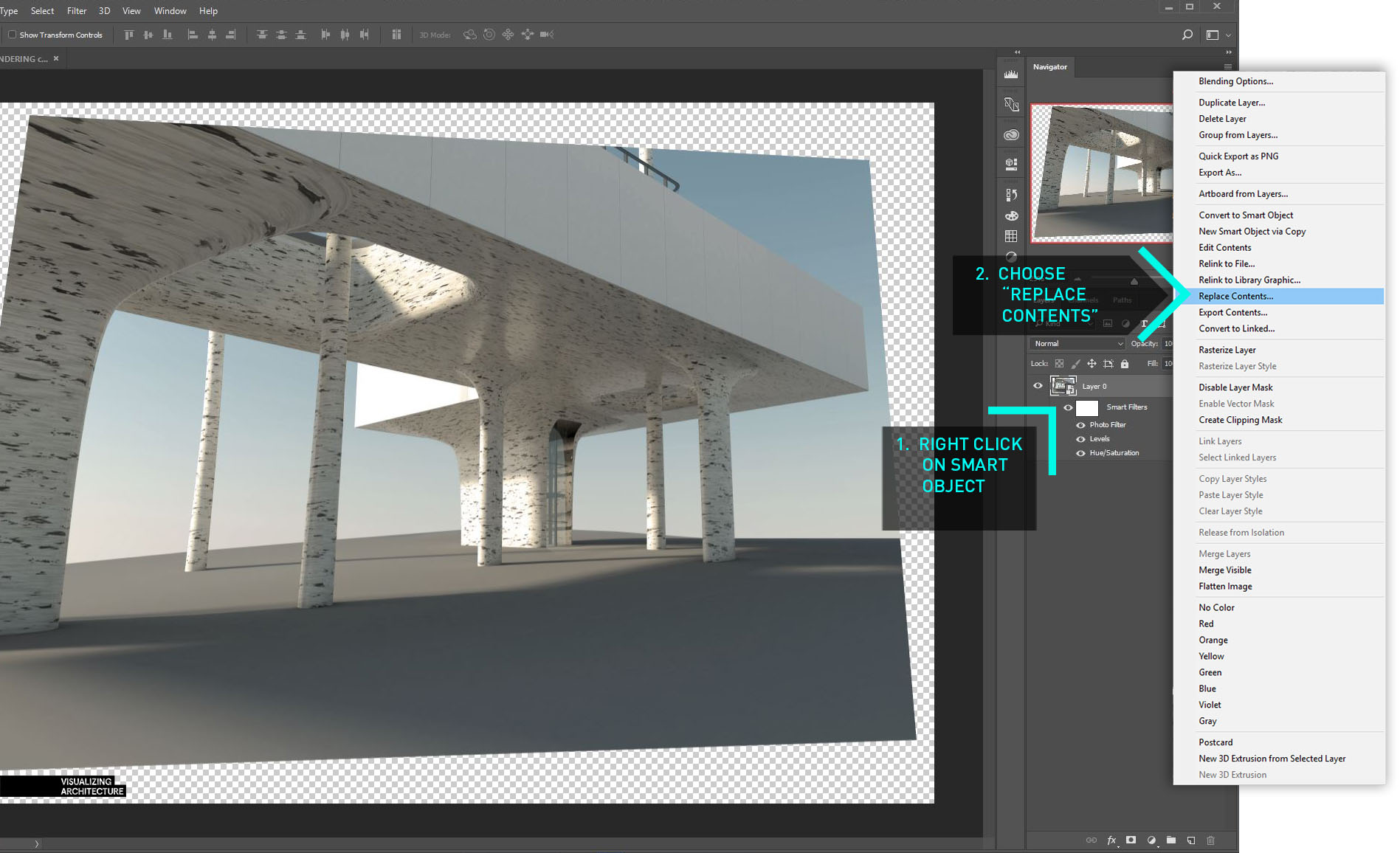 Next, I want to replace the base rendering with a new rendering that I created that shows the exterior panels turned off. To do this, I right-click on the layer name, and choose “Replace Contents”. 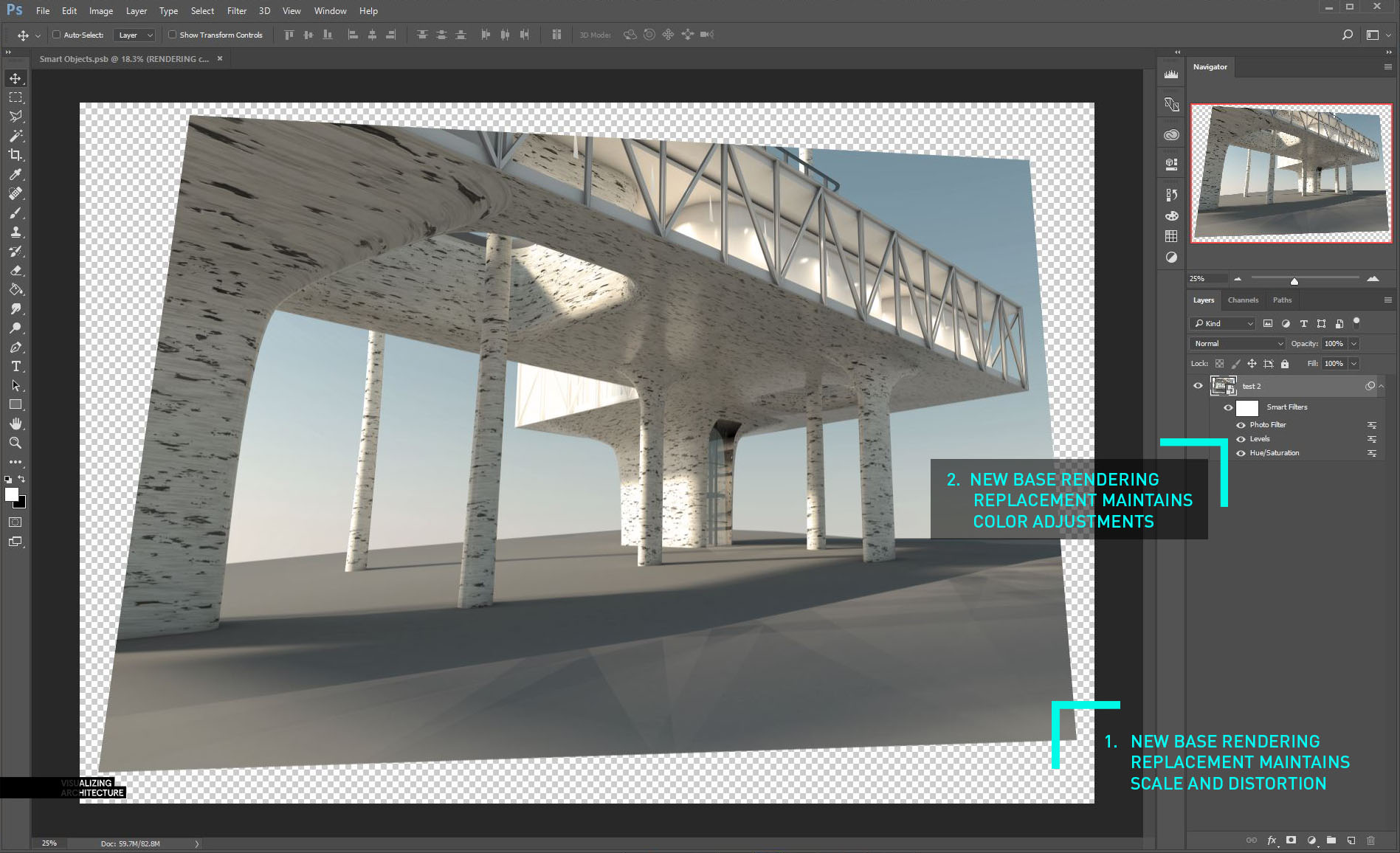 The original base rendering has now been replaced with the new rendering showing the panels turned off. All of the color adjustments remain and the image is distorted and scaled exactly like the old rendering. If Smart Objects weren’t used here, I would have had to guess the exact color corrections and eyeball the best I could to match the distortion and scaling. 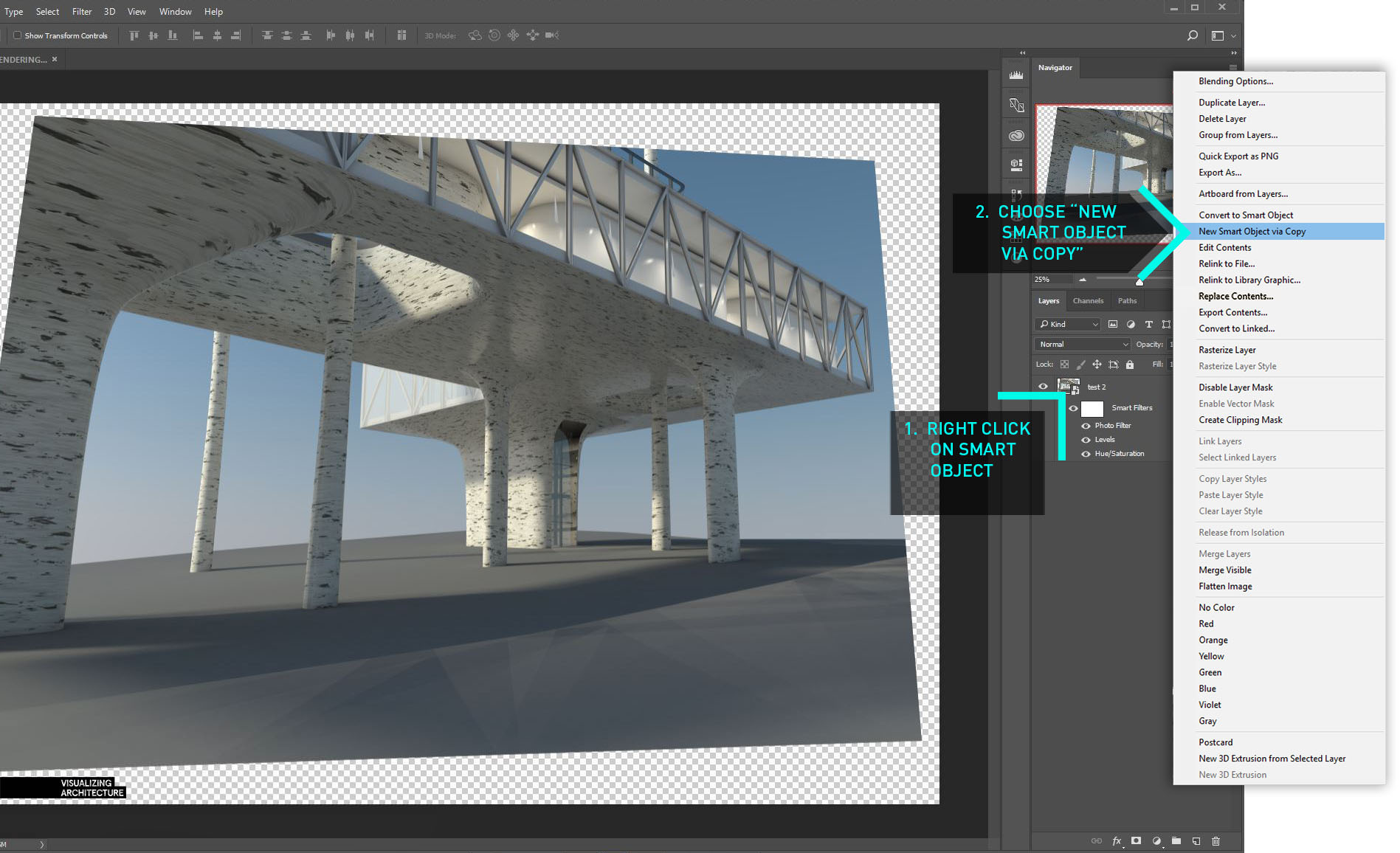 You do not always want to copy a Smart Object as an instance. In other words, sometimes you don’t want the copy to be updated with a new image when other instances of the Smart Object are updated. In this example, I want to make a copy of the base rendering so that I can reuse the exact distortion and scaling changes. But I also want the Smart Object to be unique, so that it does not replace all instances of itself. To do this, right-click on the layer name, and choose “New Smart Object via Copy”. 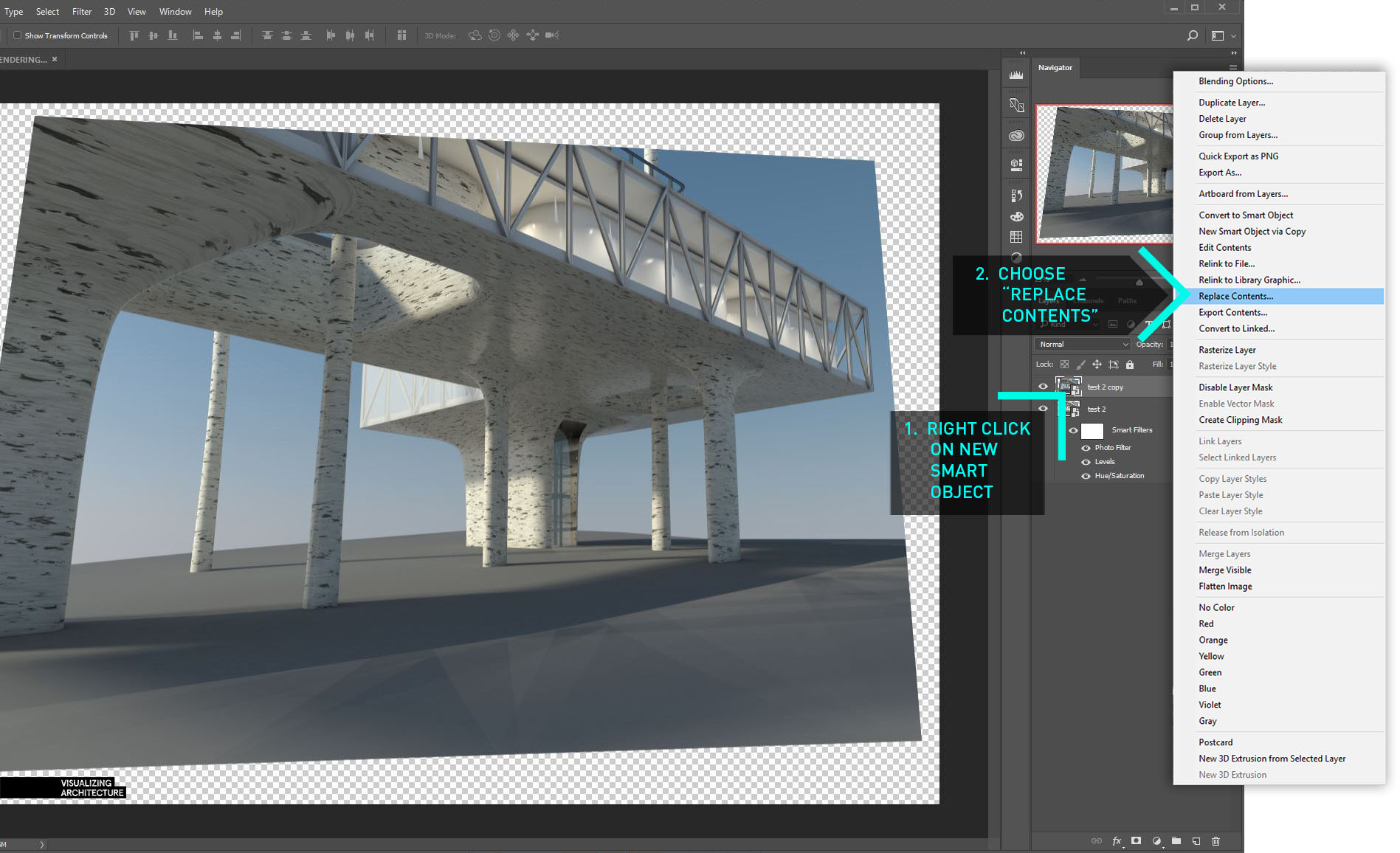 Now I have a copy of the first Smart Object along with all of its scaling and color adjustment properties. I only need the scaling adjustments and not the color adjustments, so I deleted those Smart Filters. Next, I right-clicked on the new layer name and chose “Replace Contents”. I then browsed to the new image that I want to replace the existing rendering with. Again, it is important that both the old and new images are exactly the same size in resolution. 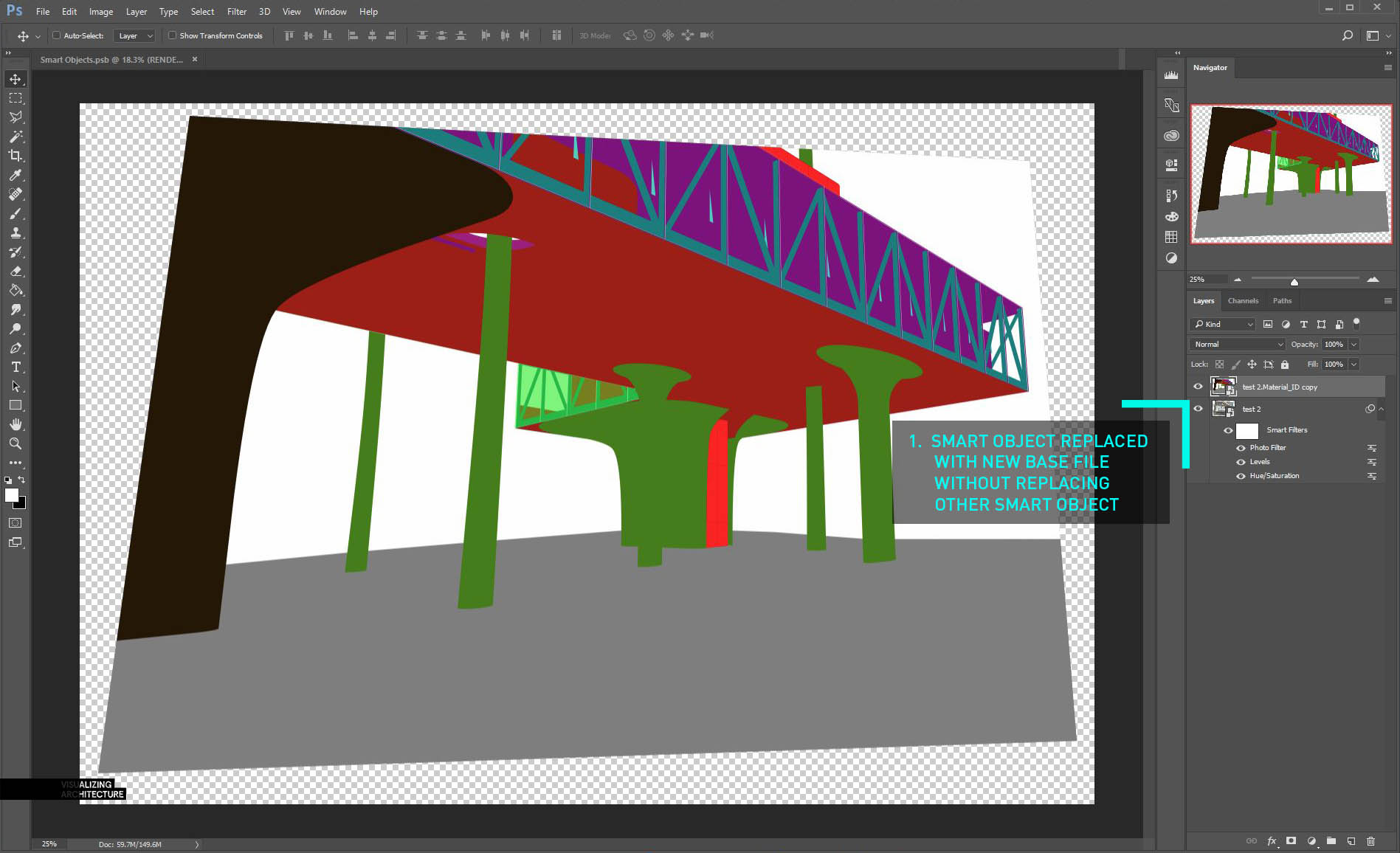 What I am left with is another Smart Object layer of my Material ID Channel that is distorted exactly like the other base rendering. I can use this same technique with all of my rendering channels ensuring they are all exactly distorted and scaled the same way.

Also, you can’t use tools like Burn and Dodge, Clone Stamp, or Paint Brush on a Smart Object nor can you use the Eraser Tool. Instead, you have to use masks to erase or rasterize the layer to use some of the other tools. To rasterize a Smart Object, simply right-click on the layer name and choose “Rasterize Layer”.

There are obviously many uses for Smart Objects, and I only covered a small number of them here. If you have a unique way that you have implemented them into your workflow, please leave a comment below. Im always looking for new ideas.