When I originally designed this project back in undergrad, I put a lot of time into the design of the section. It’s an important illustration and I therefore wanted to move away from the abstract illustrations described in the previous posts and move towards a clearer reading of the actual architecture. I didn’t want the move to be too extreme so I kept remnants of the same gridded texture used in the other illustrations. Below I break down the image to show the steps taken to get to this point.

I exported several line work images from Sketchup. I typically export many line work options whether I know I am going to use them or not. It only takes seconds and gives me more options to experiment with once in Photoshop. In this case, I exported images with the face style set to “Hidden Line”, then with “Hidden Line and X-ray”, and an image with only the guides turned on. 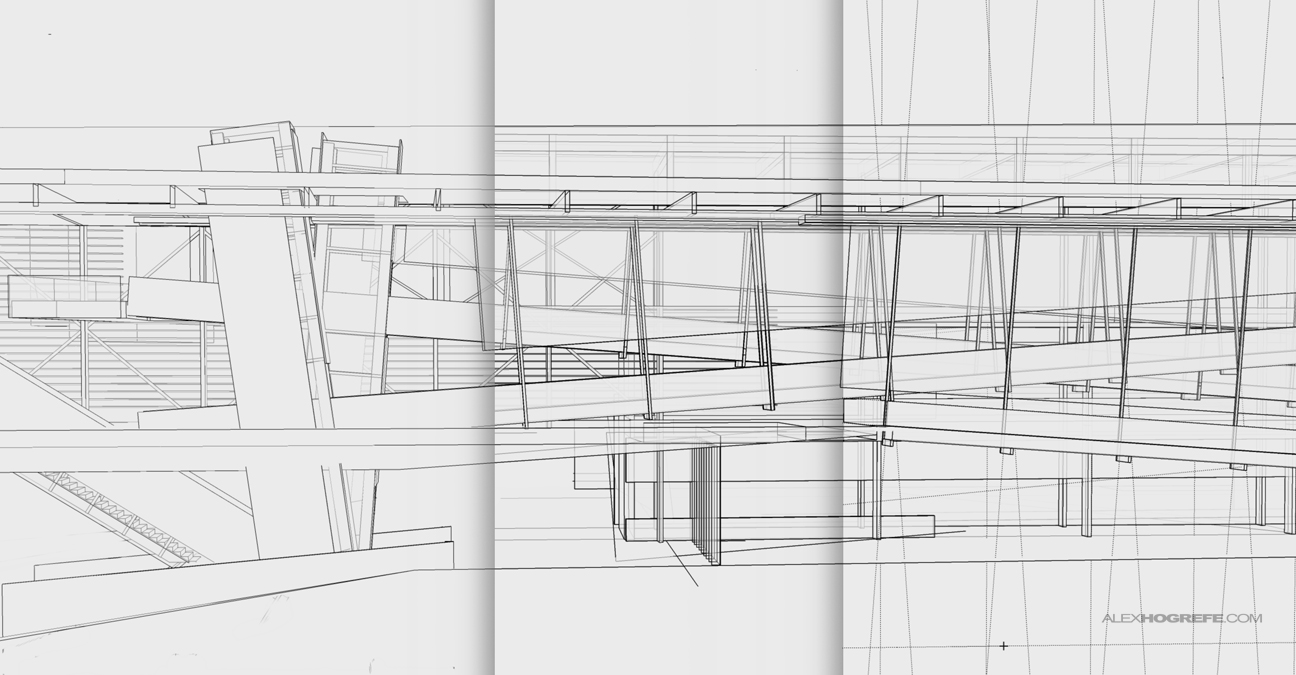 Next I did a quick clay model rendering of the Sketchup model. I used Kerkythea to render the image below but really any rendering program will suffice just as long as the rendered image aligns with the Sketchup exported line work. I also tweaked the levels and desaturated the rendering to get the image below. See this tutorial on CLAY MODEL RENDERINGS and also this post on ADJUSTING THE LEVELS . I should also say that I used the Zorro Plugin to cut the model which allowed me to render the section. 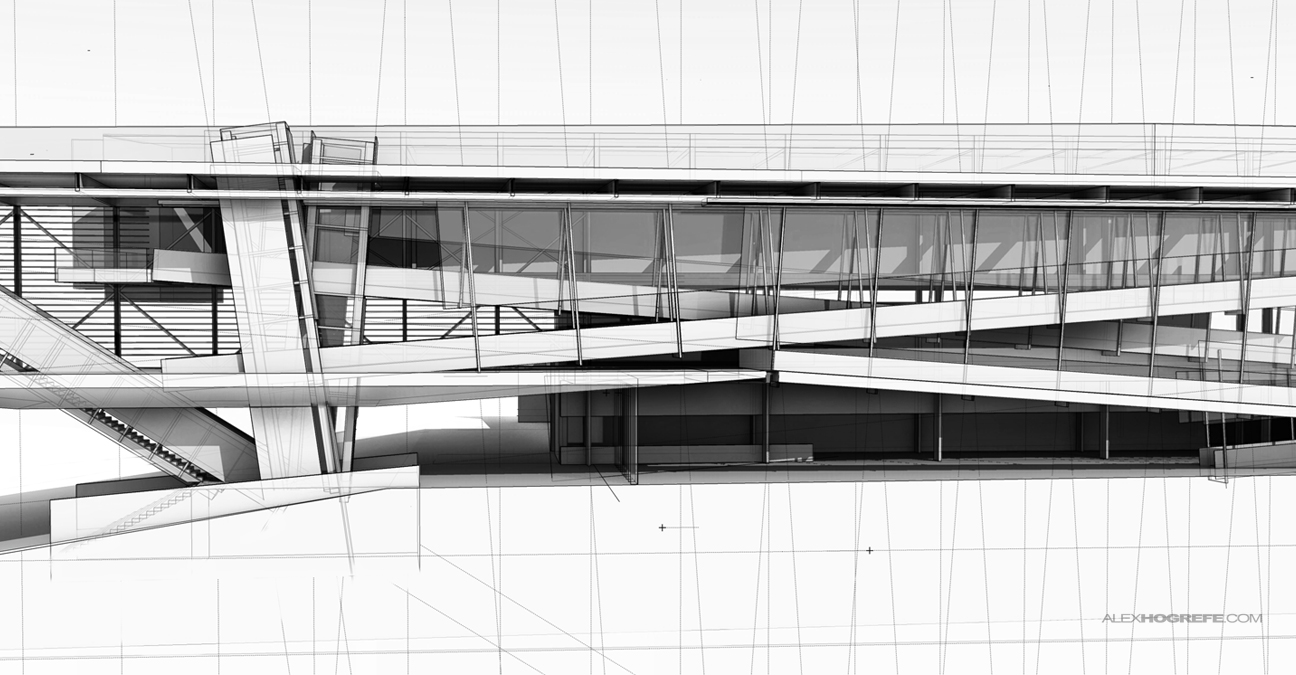 I wanted the cut geometry to be graphically strong, so I shaded it red. Nothing fancy here. I used the polygonal tool to select the cut areas and used the paint bucket tool to fill the selections with red color. This process is described in more detail in the QUICK SECTIONS tutorial. 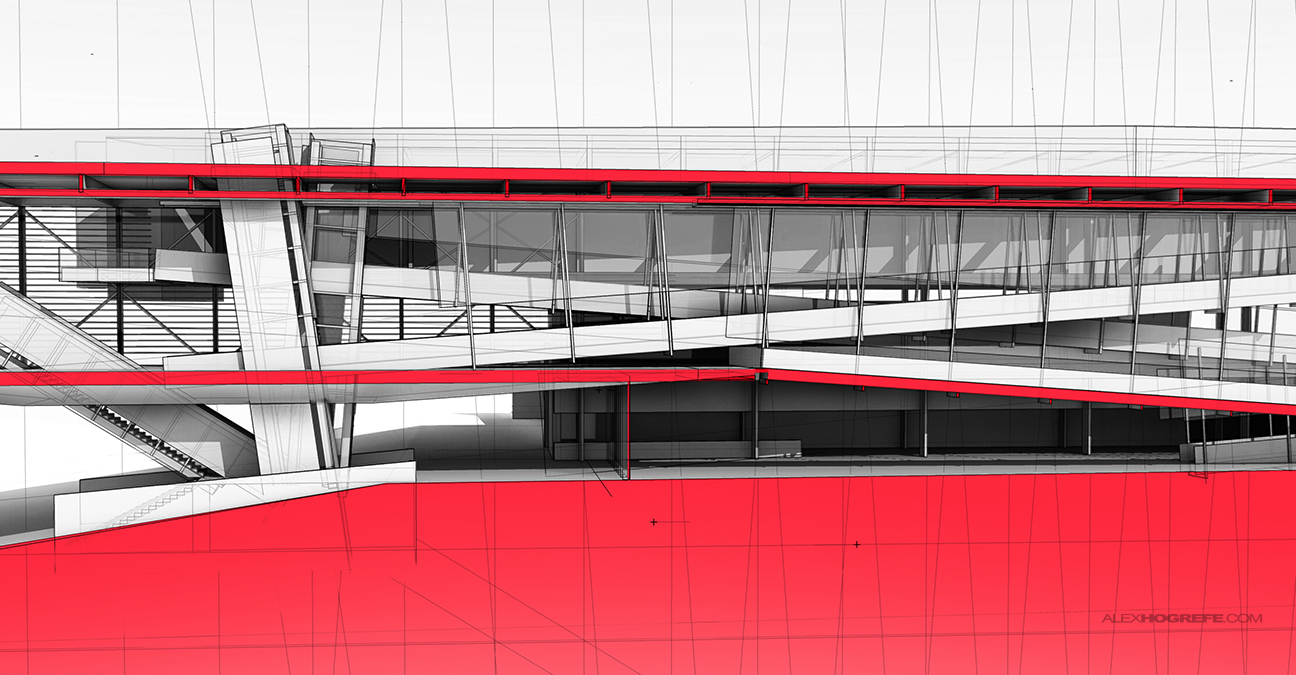 The image at this point is too stark and needs more color. I want the ramps and three structural elements to stand out in the section. An easy way to solve this is to add some warm tone overlays. With this illustration, I’m not concerned with materials. It’s still diagramatic and I plan to have the perspective illustrations later on to provide that information. 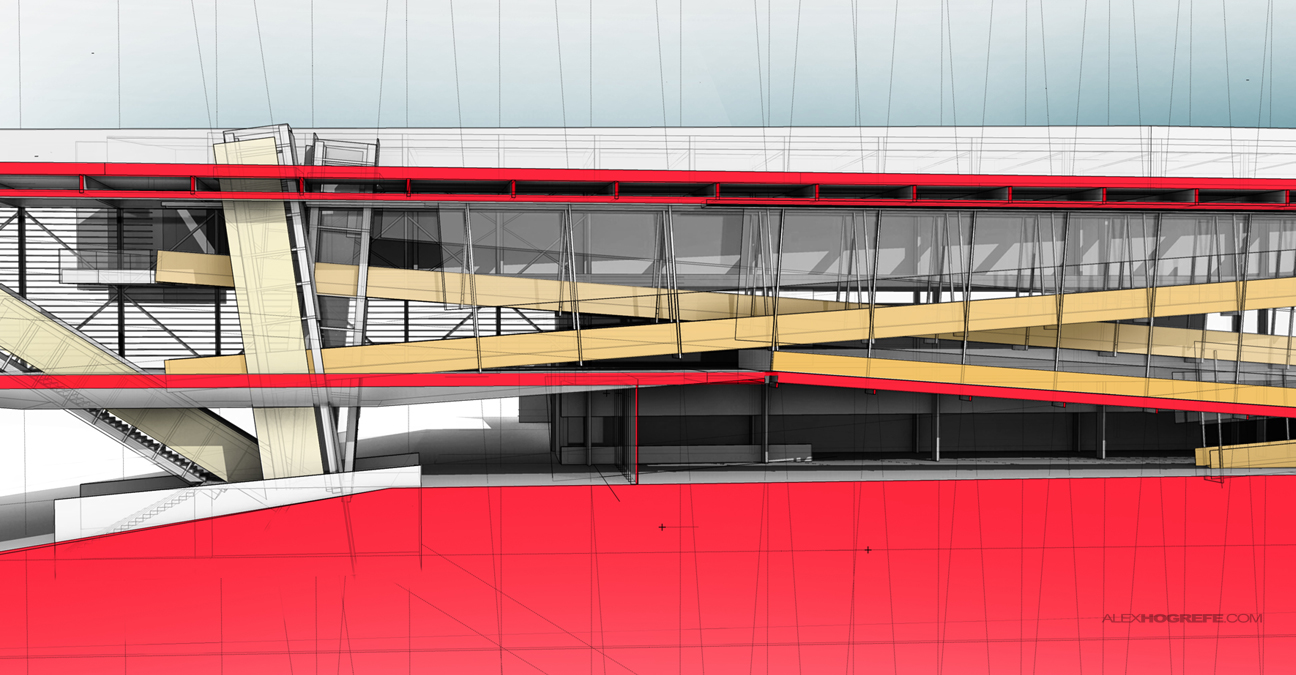 The design contains many ramps as well as layers of translucent materials but this is lost in the illustration. To fix this, a light blue paint with low opacity representing the translucent material was added above the ramps. I then copied this layer two more times to give a better perception of depth and layering between the ramps. 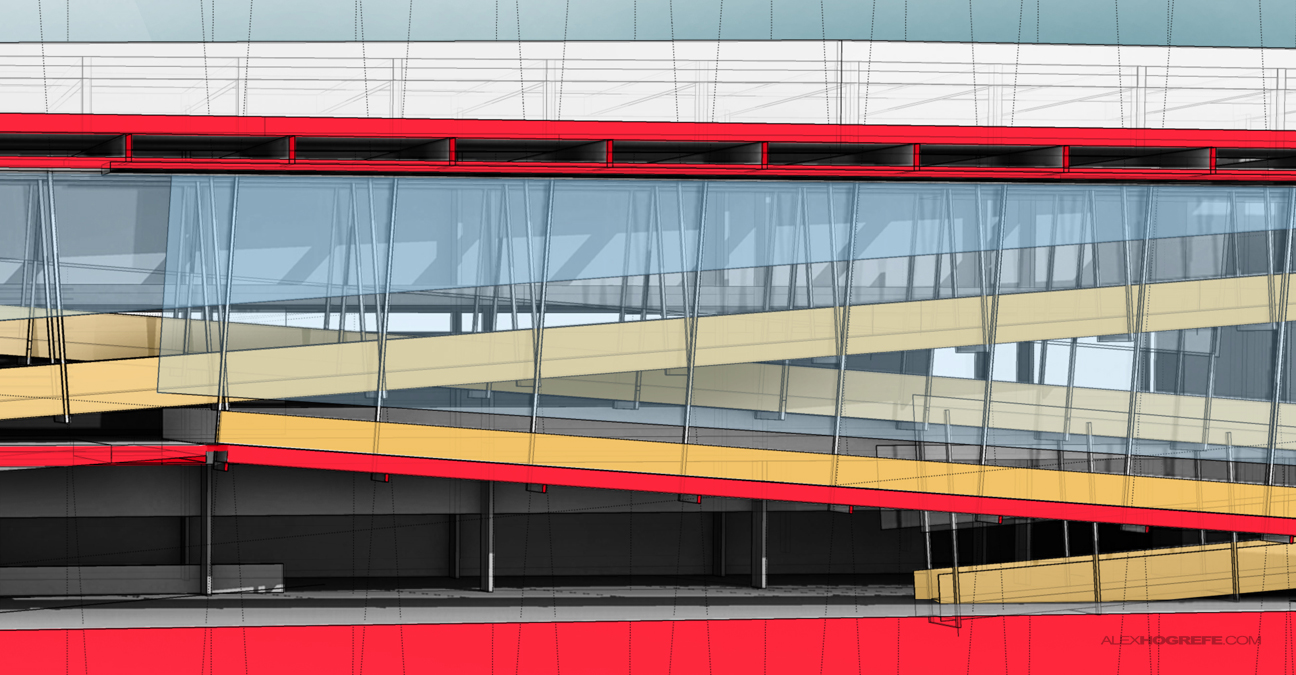 In the previous posts, I have been overlaying a graphically strong grid pattern over the illustrations to convey the idea of shifting organizing grids. The concept still follows through to the section, however, I want the texture to be toned down. I took a texture of different colored squares, stretched it to give more directionality, and then scaled it to work with the column spacing of the architecture. I next duplicated the texture and rotated to match the second grid system. Both layers were set to 20% opacity. 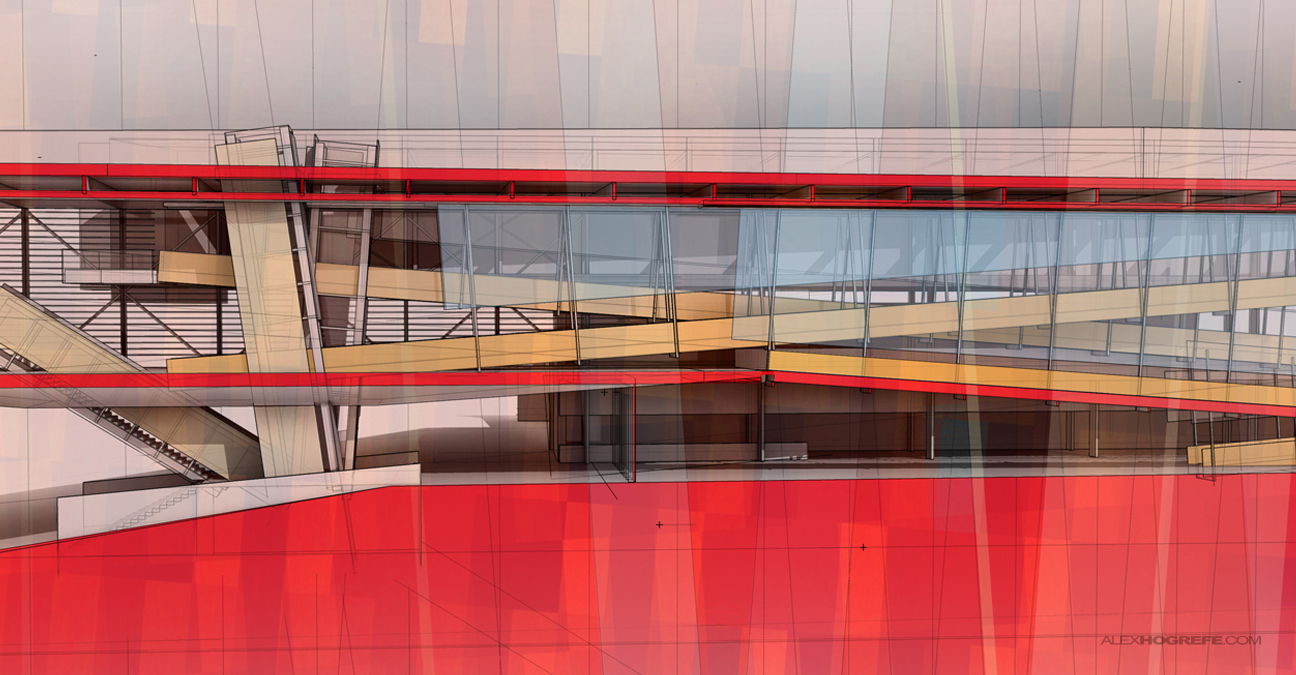 The section was populated with people to give a sense of scale. A quick way to change the people into silhouettes is to go to “Image>Adjustments>Hue / Saturation”. Then move the “Lightness” slider all the way to the left. 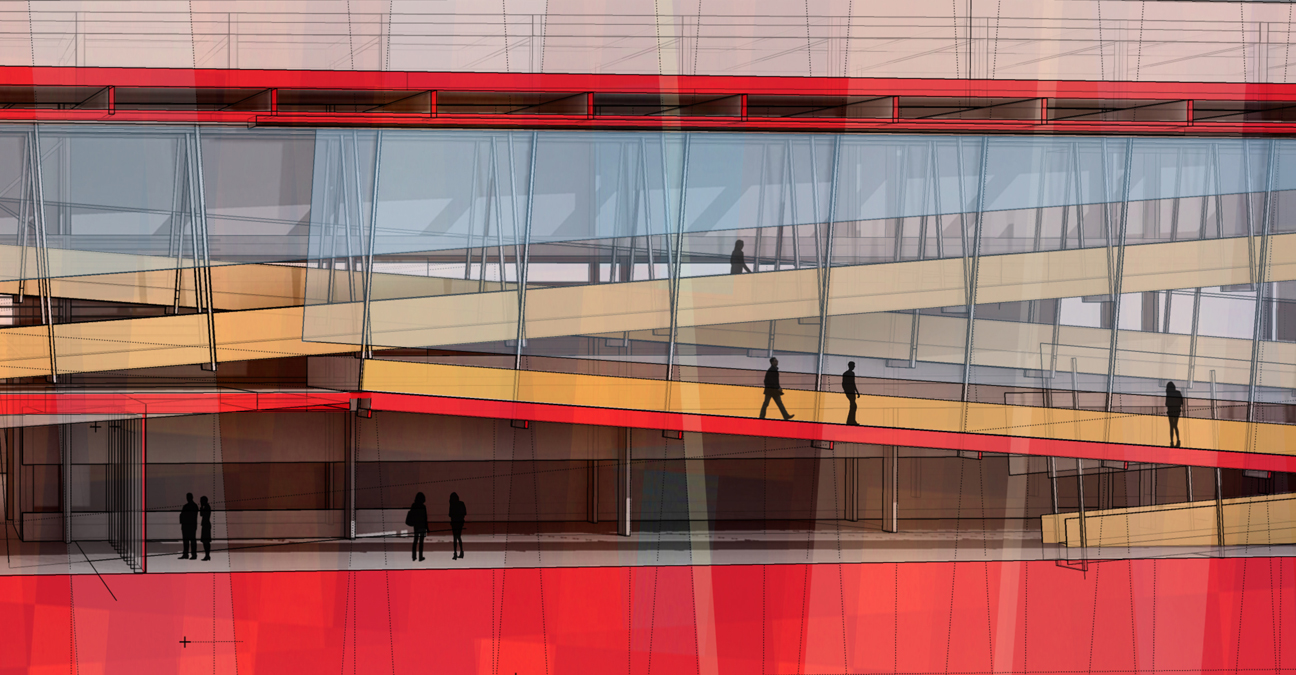 At this point, I am happy with the illustration. But, the image still reads a little flat for my taste and is lacking hierarchy. More contrast helps to move the eye around the image. To do this, I duplicated the final image layer, desaturated it, and set the layer blend mode to “Overlay” on top of the original layer. This deepens the shadows and brightens the highlights. It’s similar to adjusting the levels or curves, but gives a slightly different look. A similar workflow can be seen in the IMAGE SOFTENING tutorial.

Below, the final image