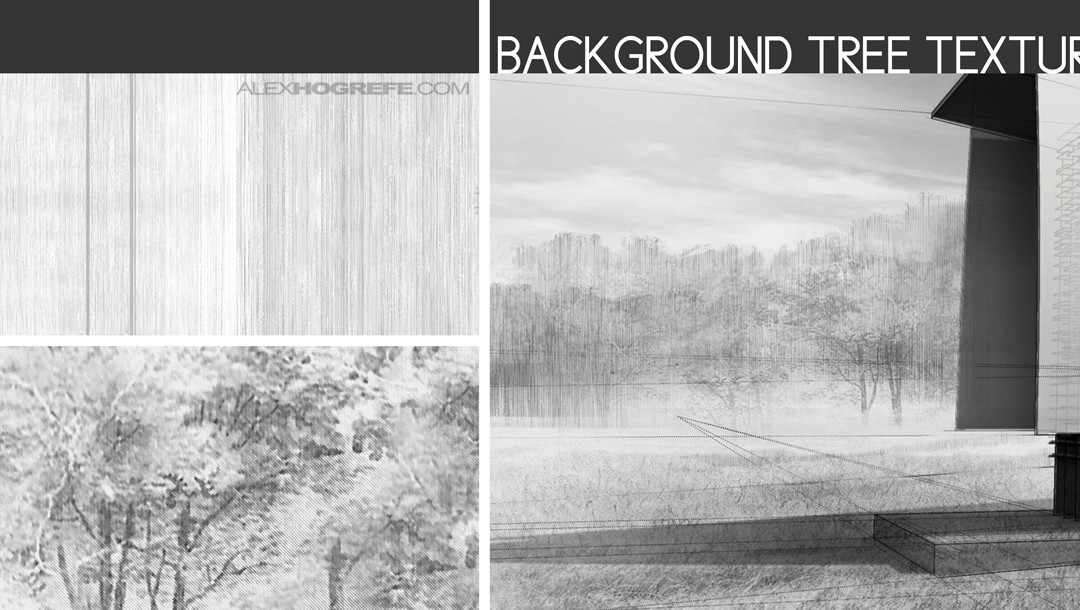 I wanted to go into more depth about how I created the sketch look. Images like these depend almost entirely on the textures you use. I spend a lot of my time scavenging images online as well as creating my own to get the exact style that I am looking for. Along with good textures, another key component to sketch illustrations is the subtle imperfections. Sometimes, the textures that I use have enough blemishes and flaws that nothing extra is needed. In the example below, I did spend some time adding smudges and details that help blur the edge between computer and hand drawn.

I started out creating a video tutorial but soon realized that there was too much custom editing done that was unique to this illustration and probably would make things confusing. By this I mean, there was a lot of erasing and altering of the textures that wouldn’t carry over to other illustrations. Instead, I tried to break the work flow down into basic conceptual steps showing the hierarchy of the layers as well as the types of textures that I used. As a supplement to this post, I would suggest looking at my Blueprint Tutorial and which explains in greater detail a similar workflow.

1. As with many of my illustrations, begin with exporting images from Sketchup as well as generate a clay model rendering shown below. 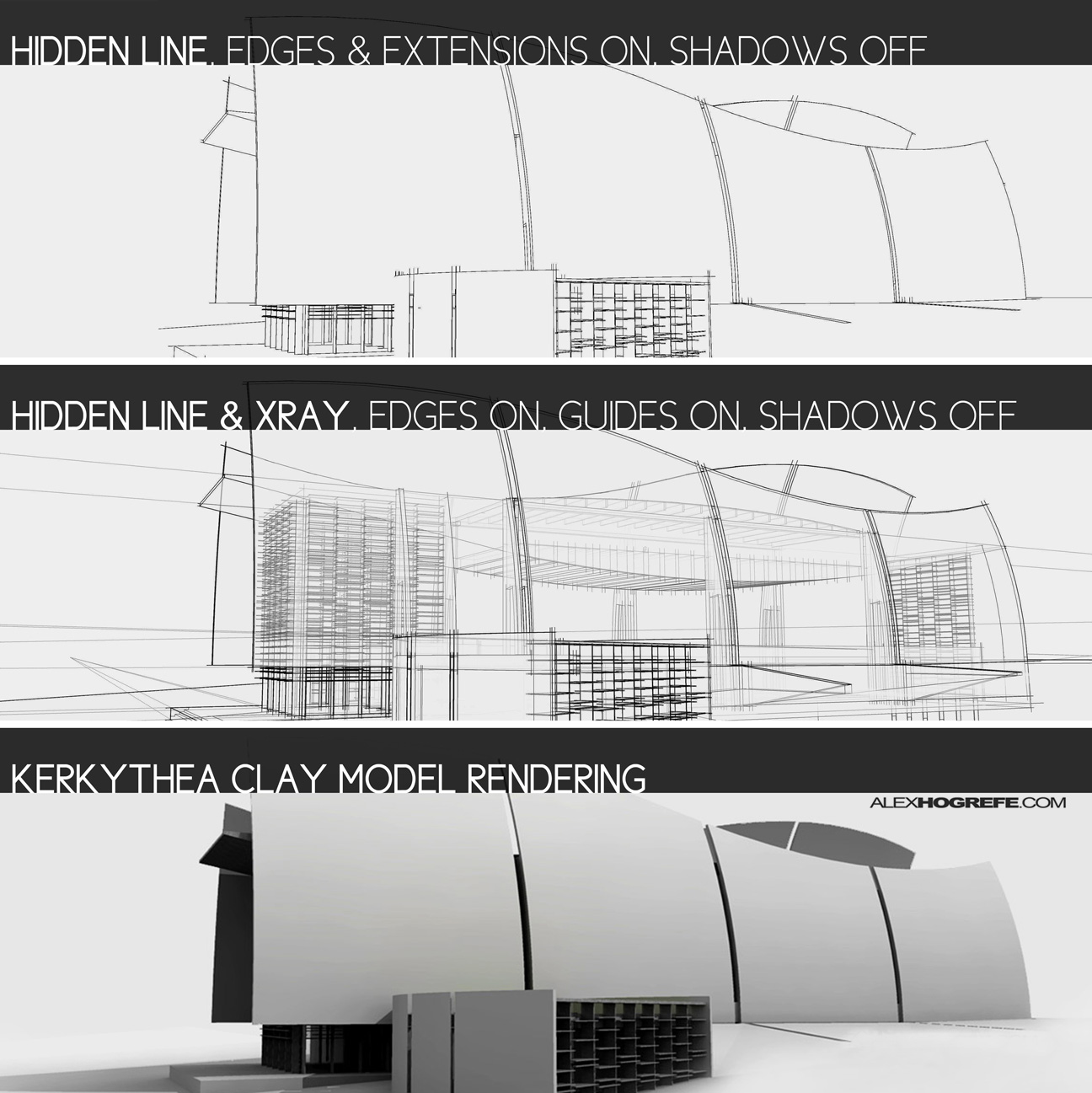 2. In Photoshop, combine the exported layers by setting the clay rendering as the bottom-most layer, and the line work and xray exports above the clay rendering layer set to “Multiply”. You may notice in the image of my layers pallet below that I have layer masks applied to the SU exports. I don’t want the line work to be too clean, so I erased or dulled certain areas to give the effect of an imperfect/ hand-drawn line.

3. The grass is made up of a few textures that I found online. There was a lot of scaling, cloning, and level adjusting that went on here to get the final result. The layer blend mode was set to “Multiply” and I wasn’t real precise with how I erased the grass around the building. Again, the imperfections help to add realism.

4. After the grass, I added the sky. I found a typical sky, then desaturated the color and washed out the image by adjusting the levels. I wanted the sky to be light as to not compete with the design. This is typical for most of my illustrations. I then set the layer blend mode to “Multiply” and used a layer mask to set the sky behind the building. 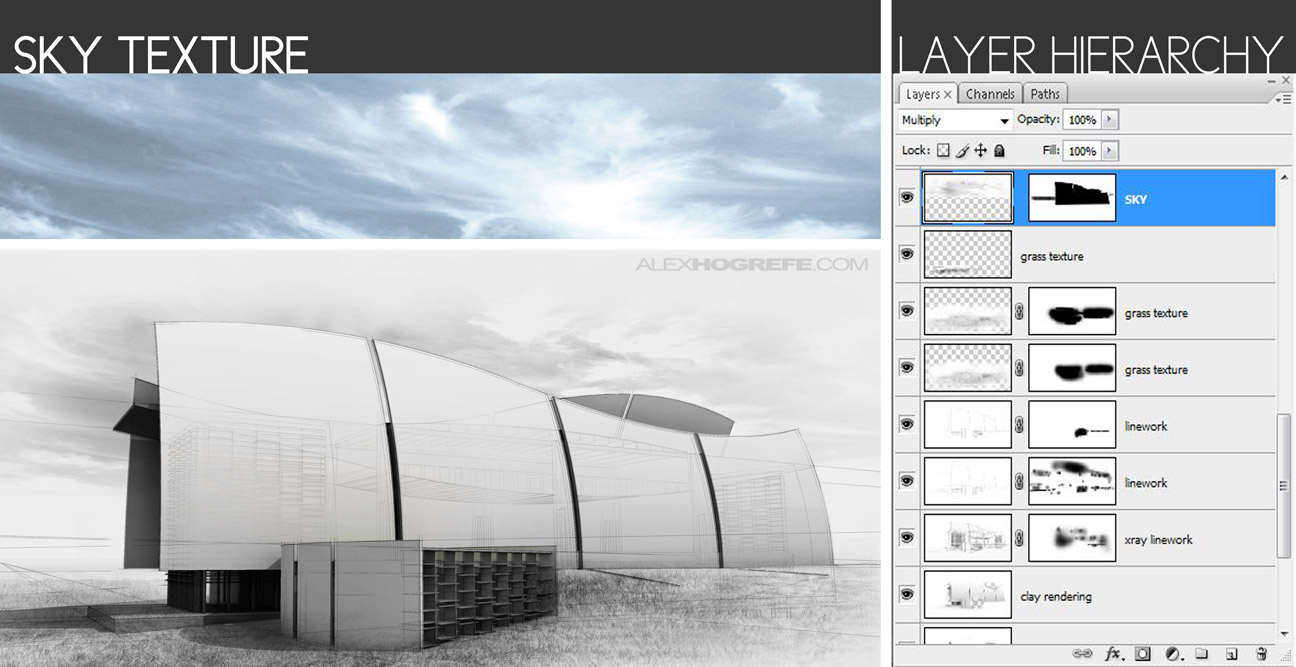 5. The background trees were again made up of multiple textures. When I created hand drawn illustrations in school, I always experimented with different styles and rendering techniques for trees. One of my favorite styles was using a parallel bar to draw many closely spaced vertical lines coming to a rough end at the top. I tried to emulate that style here as well as adding another tree texture on top of that.

6. At this point, all of the base elements are in and I want to add an overall texture to the image. This is done by finding a large sketch texture like the one below and draping it over the entire image. This is one of the only times where I used the layer blend mode “Overlay” instead of “Multiply”. If you look at the image of my layers pallet, you will see that I used the sketch texture twice. One of the layer blend modes was left at “Normal” but with a low opacity (in this case the opacity was set to 36%). This was done to give the entire image a soft gray tone. The other sketch layer was set to “Overlay” to bring out the texture grain.

7. The image looks relatively good at this point. But, this is usually the time where I focus on adding details and subtle imperfections. In some of the shadow areas of the illustration, the shading seems a little too “clean”. Here, I added textures with a strong grain to combat the flatness.

8. Graphite is synonymous for smudging and was something I learned to embrace when learning to draw at a young age. It takes incredible hand-eye coordination to shade a perfect gradient. Even then, it’s not perfect like a computer generated gradient. That’s why I spent some time adding smudges and splotches to give another layer of realism. I simply use the brush tool with a soft tip and low opacity, and paint areas to break up the perfect gradients. Leave the layer blend mode set to “Normal”.

There is obviously a lot of manipulation done to each layer that wasn’t shown here, but that will change from illustration to illustration. On another note, for those who don’t want to spend time generating a clay model rendering, another option could be to follow the steps outlined in my Ambient Occlusion Tutorial which, for this illustration, could have generated a similar result.