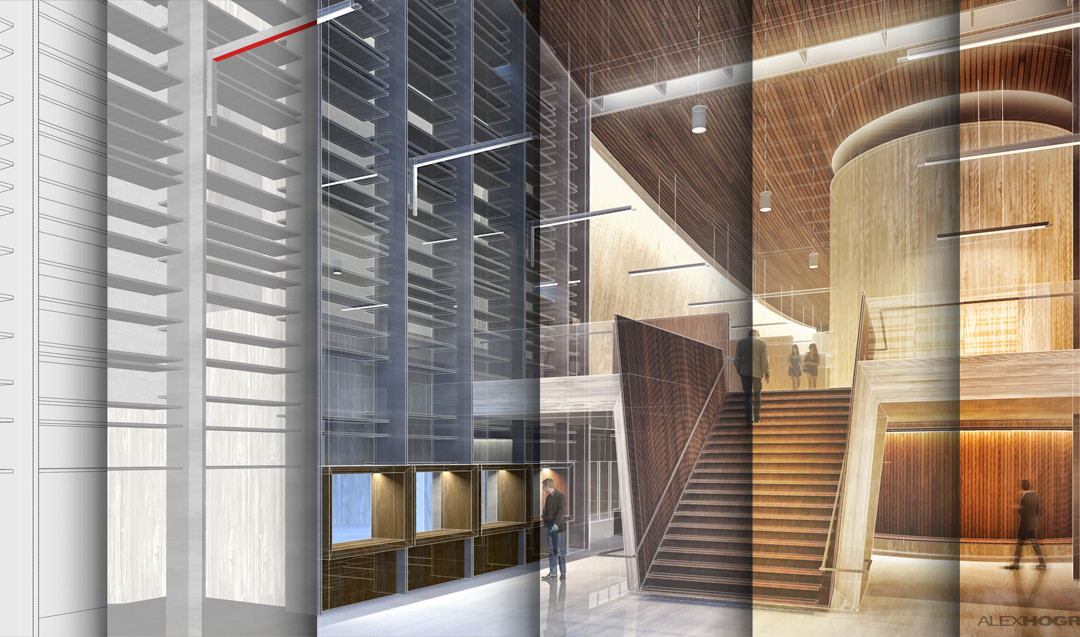 This past post received a lot of feedback from you asking for a more detailed breakdown of the illustrations. The interior illustration in particular got a lot of attention so I am going to start with that one. Since several different parts of the workflow have already been talked about in the past, I will be adding links to the corresponding sections to avoid too much duplicate information on this site.

1. For this interior shot, I started the process by identifying where and how I wanted to light the space. I designed some linear pendant fixtures to provide most of the ambient light. Then I looked to some specific areas to use the light to highlight the form such as around the stair enclosure and washing the large side walls.

View selected in the Sketchup Model 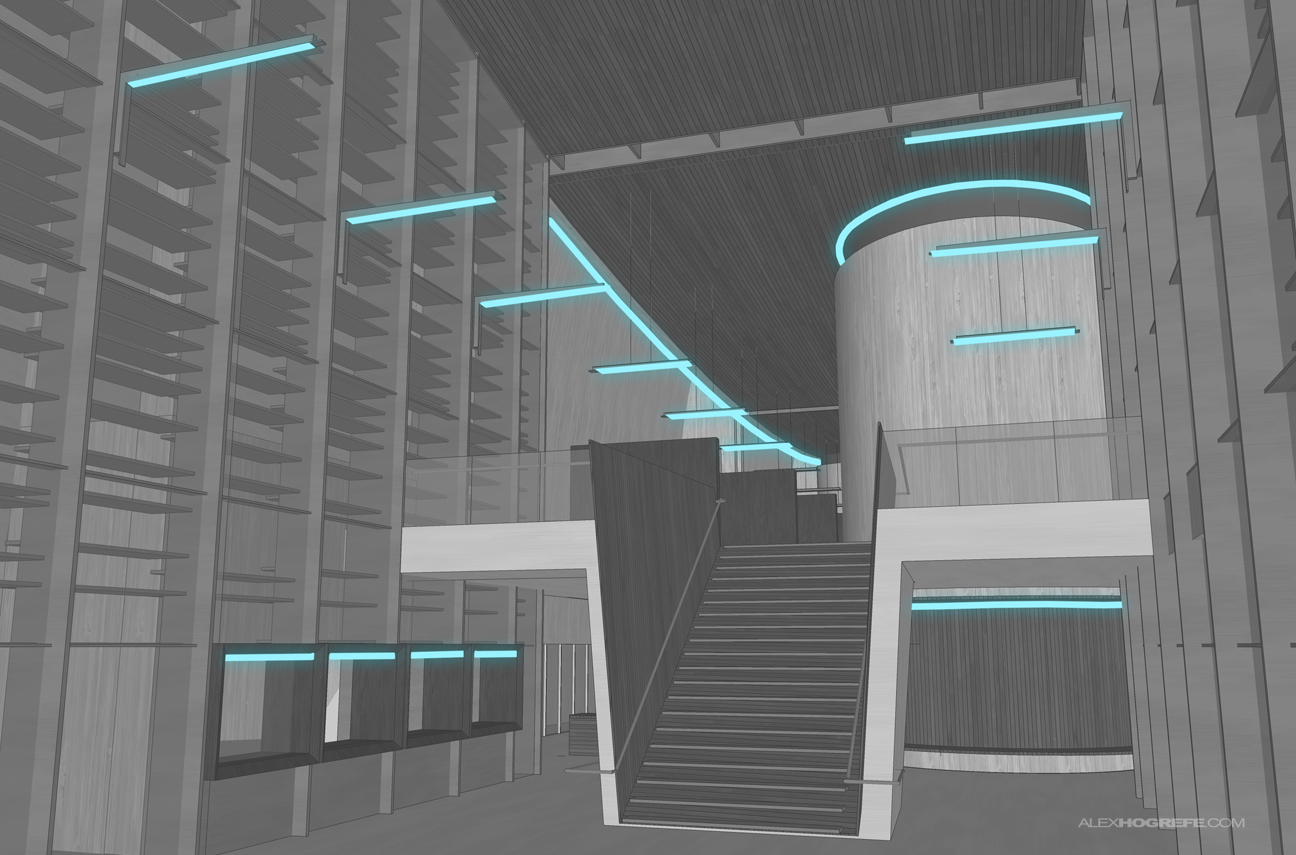 2. Once the locations were determined, I began applying a unique material to these locations so that I can tell this material to emit light later on in Kerkythea. I use a color that I know is not being used anywhere else in the model, in this case red. I also renamed the material such as Light 1, 2, 3, etc. so that it would be easier to identify when imported into Kerkythea.

3. The model is then imported into Kerkythea where I can begin telling the material to emit light. This is done by finding the material on the left, right clicking, and choosing “Edit Material”. In the material editor dialogue box, I first change the diffuse color to white. I next tell it to emit light by going to the “Self Luminance” section and giving it a “Radiance” color of white. The “Power, Efficiency, and Unit” settings will change based on how big your light and space are, but you can start with what I am showing and tweak the “Power” setting for more or less light. With the lights in place, I did a quick rendering which will be used as a base image in Photoshop. A more in depth explanation on this process can be found HERE. 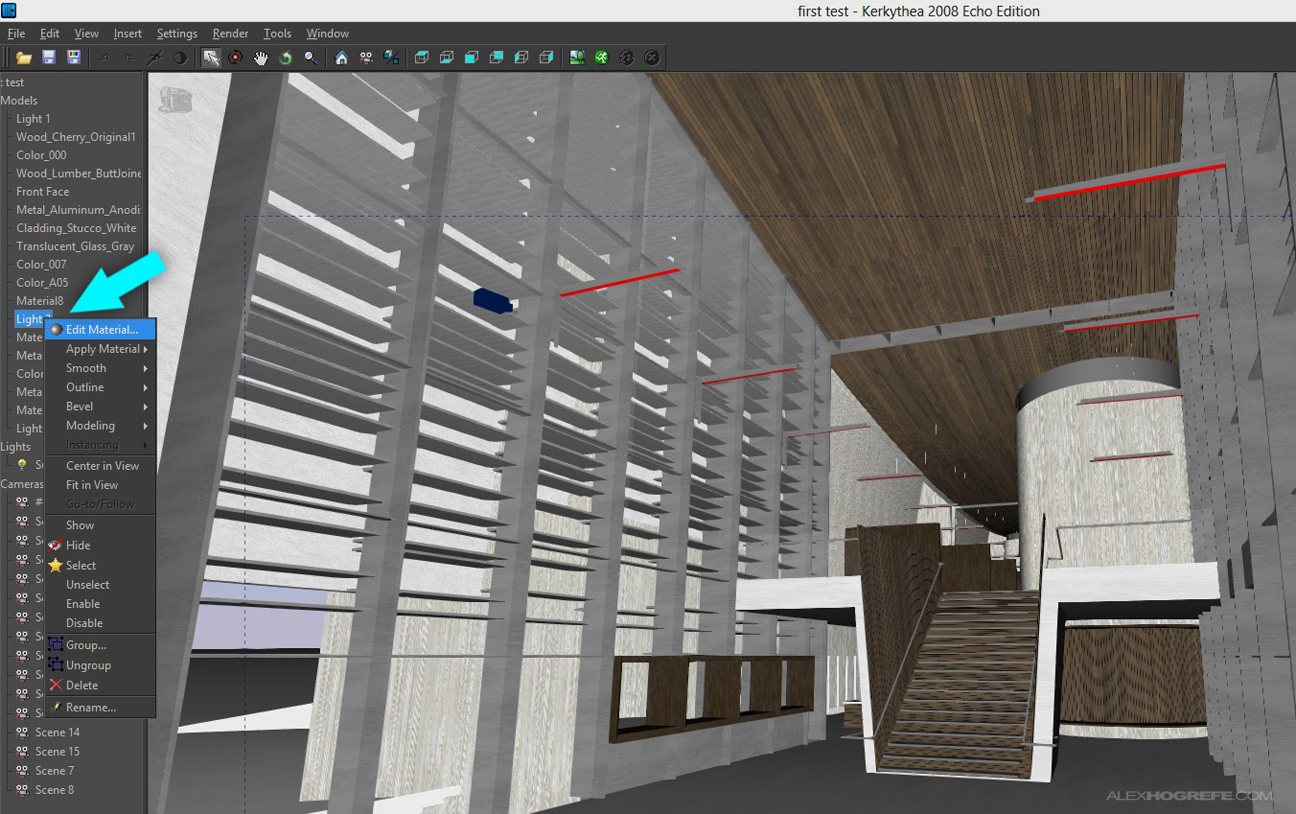 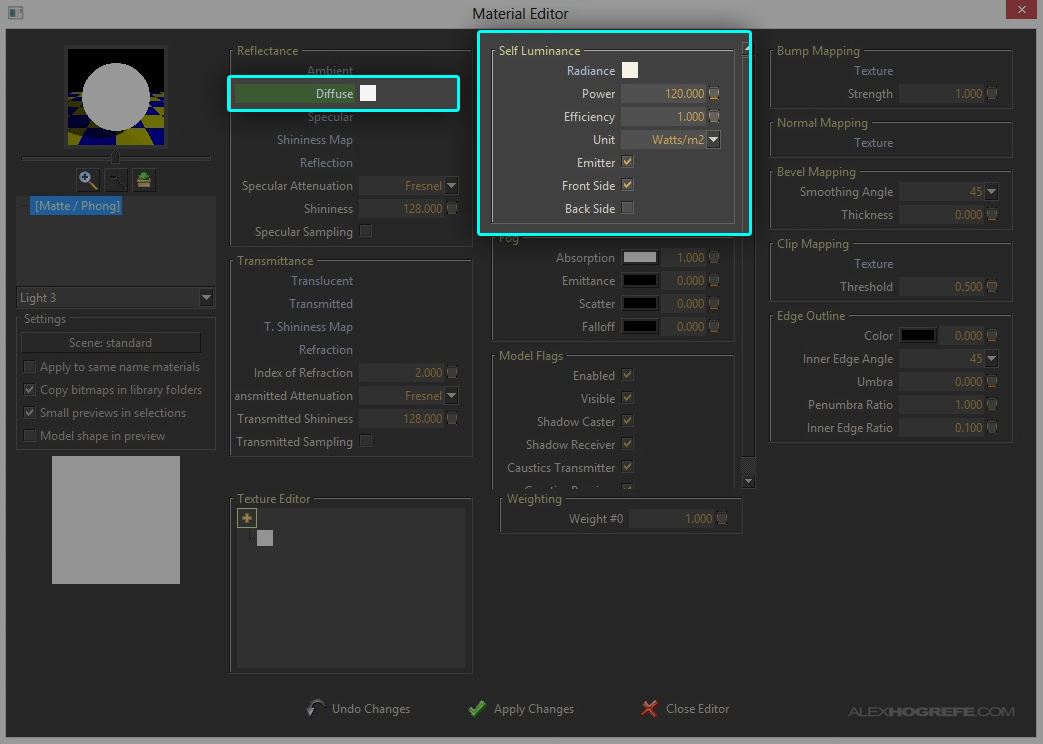 Above, a rendering from Kerkythea with artificial lights

4. Now that I have a base rendering, I am ready to go into Photoshop. I decided to overlay white line work onto the rendering to give the illustration a little more texture. Open the exported line work from Sketchup in Photoshop and move the layer above the base rendering layer. Go to “Image>Adjustments>Invert” to invert the line work colors. Then set the Blend Mode of the layer (found in the layers palette) to “Screen”.

5.  Knowing that I won’t be overlaying anymore exported SU images, I want to adjust the perspective so that the verticals are perfectly straight up and down. Select all of the layers, then go to “Edit> Transform> Perspective”. There was a post on this subject a while back going into more depth which can be found HERE. 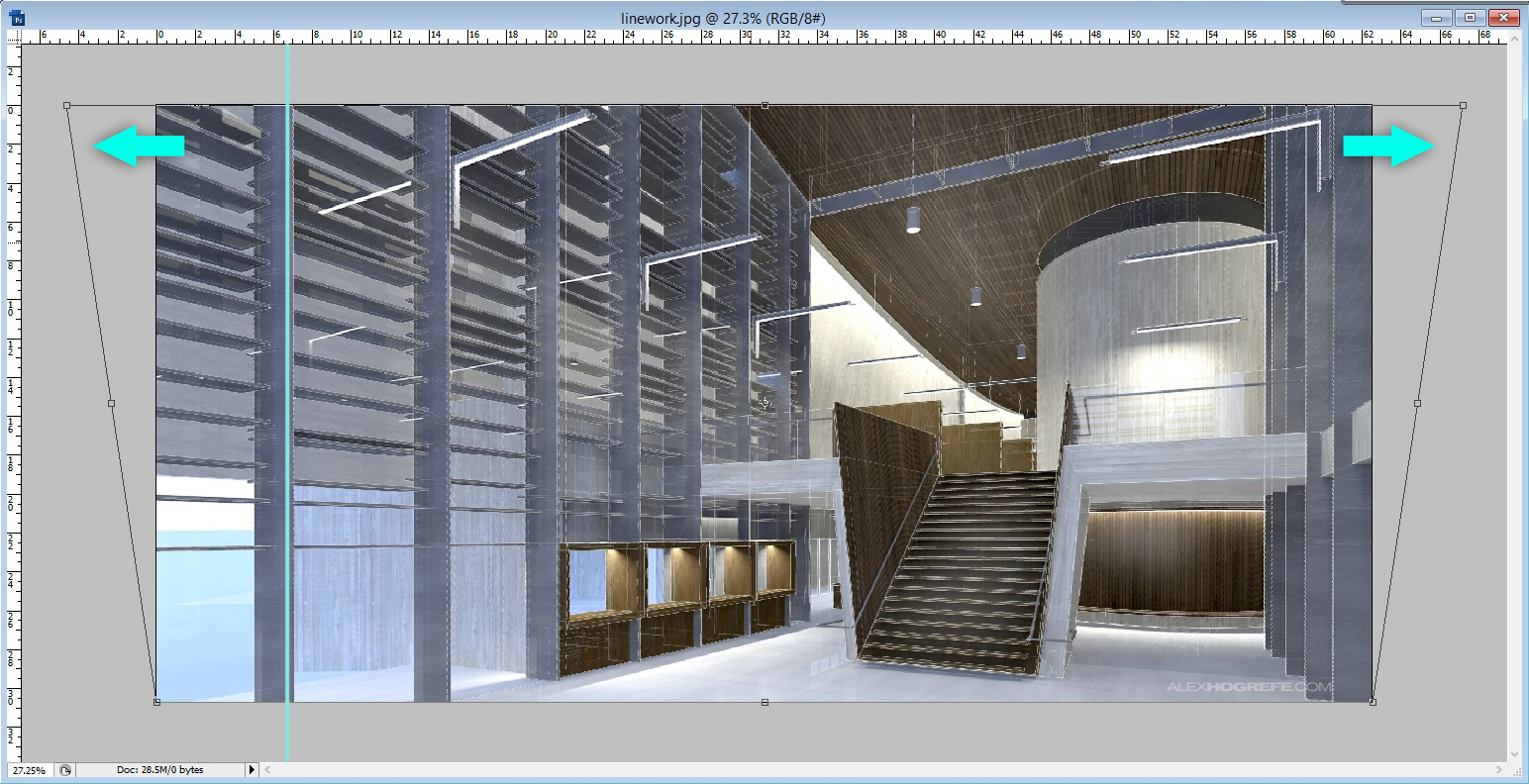 6. This next step is something new that I have been experimenting with. I want to add some warmth and detail to the illustration in which case I would typically adjust the levels and add a color overlay. However, I have been playing around with a Photoshop plug-in by Topaz Labs.  It is primarily a photo editing software but it has been working great for my architectural illustrations. It offers a little more flexibility in terms of pulling out more detail and color in the images. I used the plug-in here to up the detail of the wood and concrete materials.

7. At this point, I am ready to get into the details of the illustration. The first couple of areas that I want to address are adding a background to the outside and fixing some lighting issues in the ceiling.

8. People are always important for scale so I threw a few of them into the illustration. Reflections and shadows are key to getting your people to look like they belong in the illustration. Check out THIS VIDEO TUTORIAL for more on this subject.

9. I wanted to play up the scale of the space and also the fact that so much light would be washing in from the outside. I can solve both these problems by using glare and fog. Using the brush tool and white paint with a really low opacity, I added a slight haze where I imagined a lot of daylight would be coming into the space. I also used this same method to create depth by painting in “fog” as the space projects further back into the distance. It’s a subtle move but helps to emphasize the areas of the interior that I want emphasized and gets the illustration closer to the atmosphere that I am looking for. THIS POST explains in more detail how to add fog. 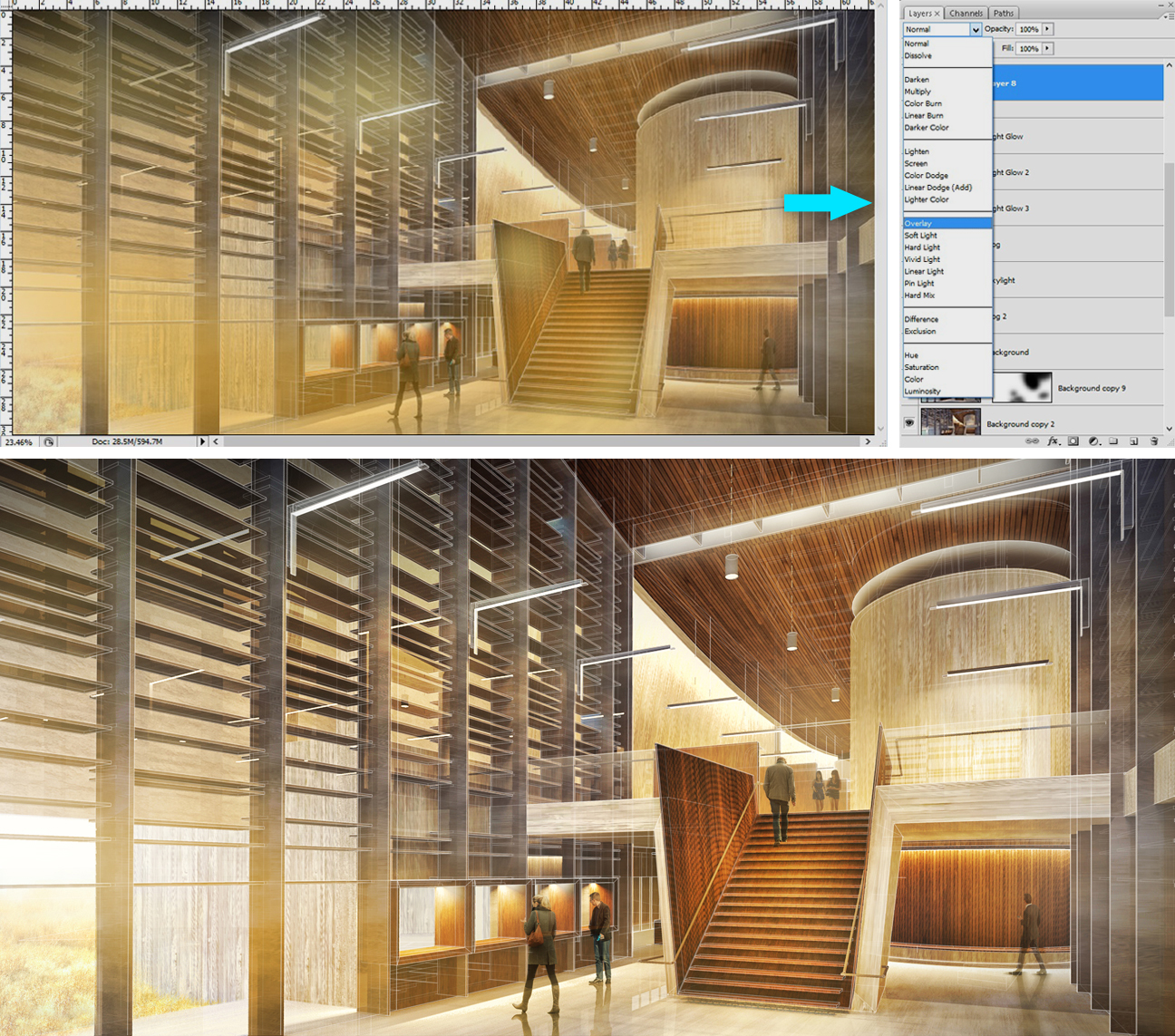 11. The image is looking good at this point and this last step probably isn’t always necessary. However, I used the Topaz Plugin “Adjust” one more time to tweak the colors and add detail to the illustration.

Finally, some of you may have noticed that I am trying to raise money for the latest version of Photoshop. Everything on this site has been produced using CS2 and I think it is about time I upgrade to the latest version. If you find this site helpful and would like to see future tutorials with the latest Adobe software, please consider making a contribution. More information can be found on my ABOUT ME PAGE as well as on the side bar. Thank you in advance for all of your support and thank you to those who have already donated. See you next week.