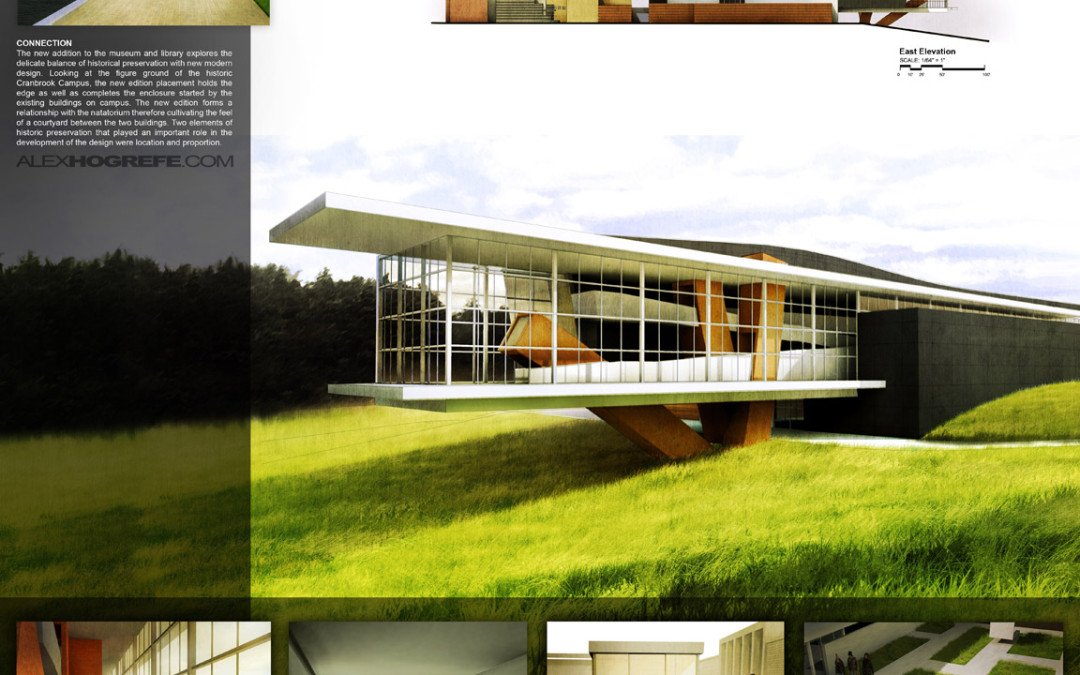 This post is continuing off of the 4 boards discussed last week. To get up to speed on what I have already done so far, read this first. For the most part, I kept the overall layout of the original presentation, however, I have been tweaking certain elements and making adjustments in attempt to get the compositions to read clearer.

The original rendering board had way too much information. I felt the layout worked, but there was some useless information that could be removed.

1. Imagery: Similar to board 1, the imagery on board 3 is too desaturated. At the time, I thought I was making the building stand out by desaturating the landscape. Over the years, however, I have spent less time trying to get my designs to stand out and more time playing up the site around the buildings in an effort to create a better relationship between the two.

2. Physical Model: There really isn’t any reason to have images of the physical model that I built for the project on the presentation boards. I thought that including these images would give me brownie points for the competition. In reality, they are not adding any value to the story that I want these boards to tell. 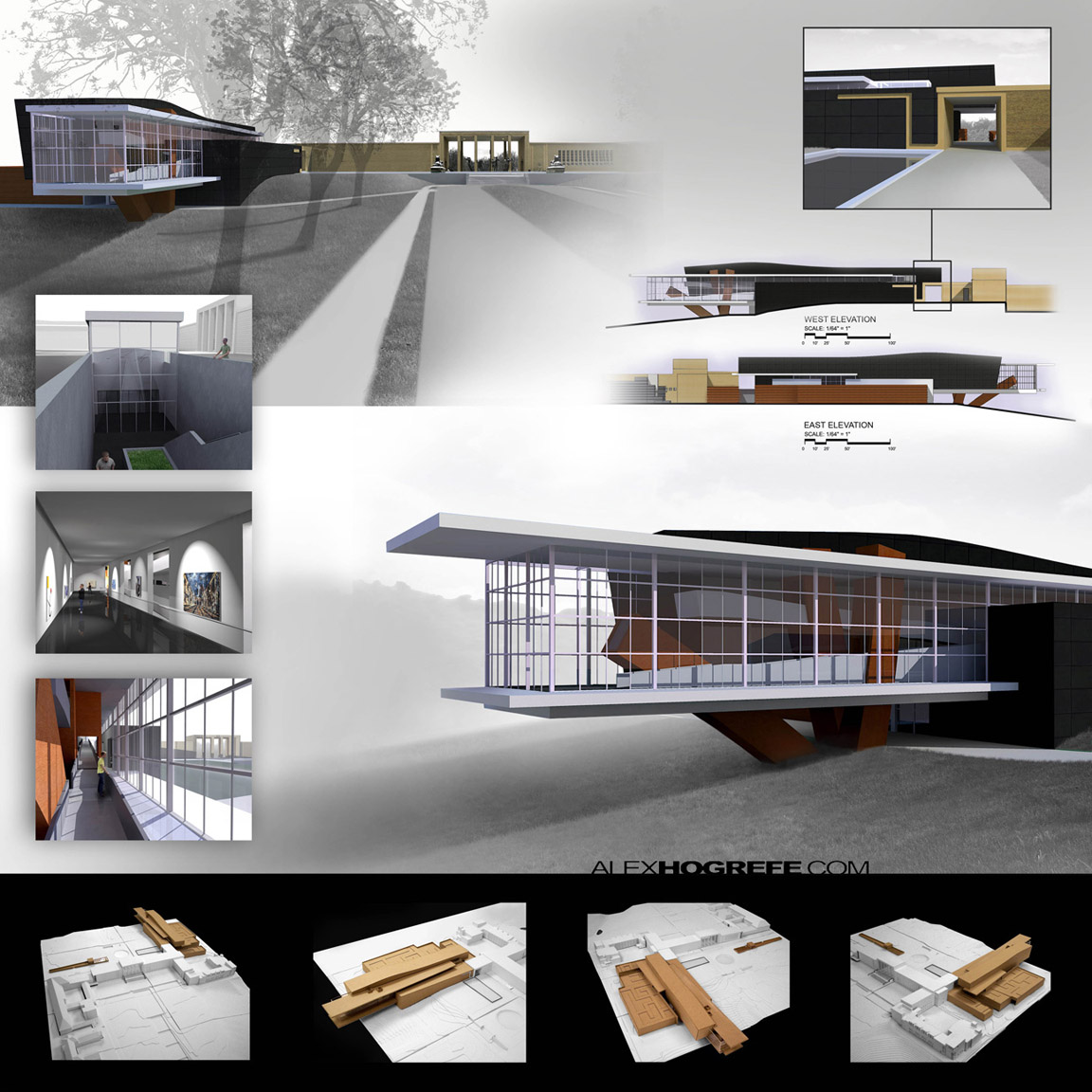 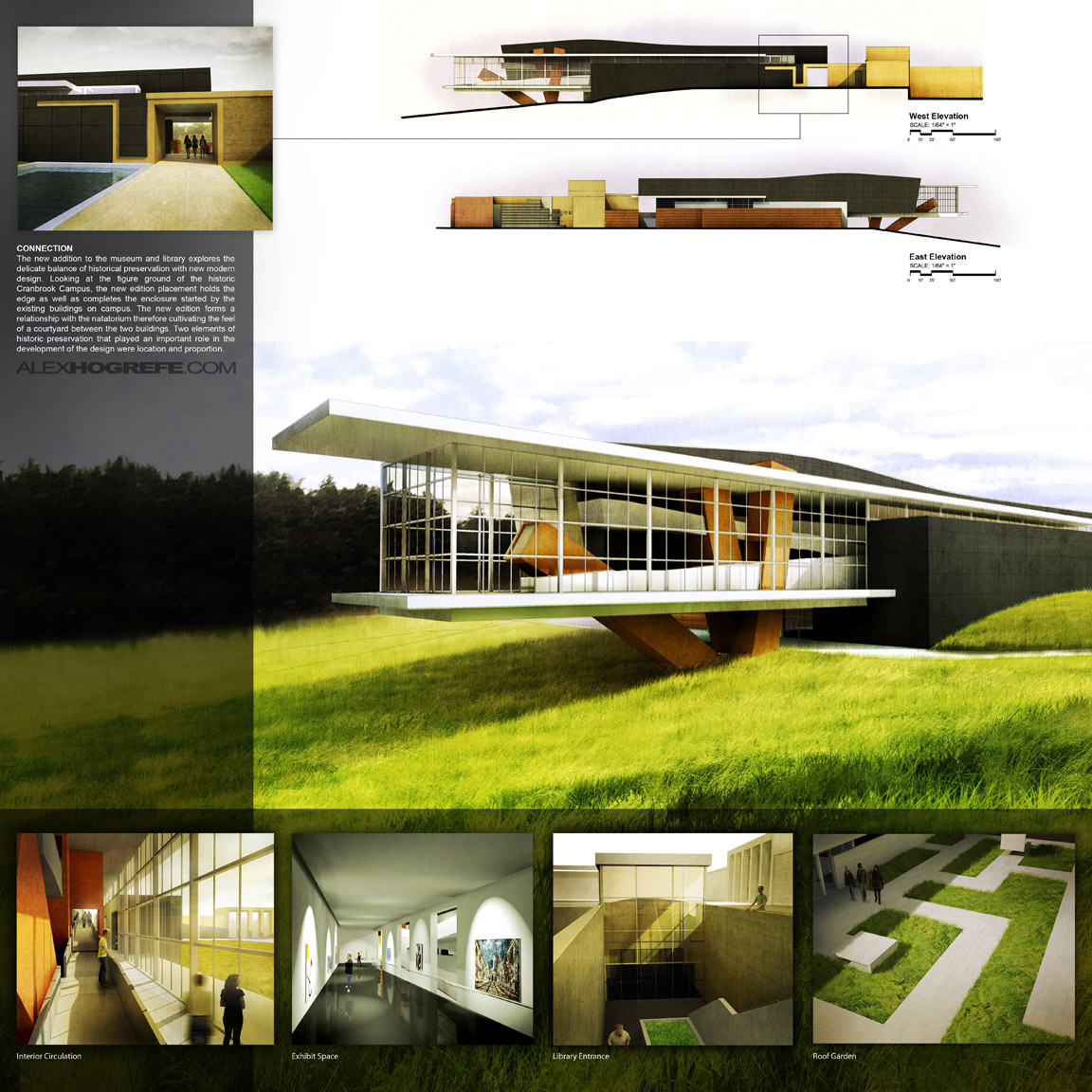 With the new rendering board, the first thing that I focused on was adding color and life back into the illustrations. A lot of time was spent just adding color overlays and textures to the existing illustrations. I also focused on simplifying the boards. The main image now has lots of room to breath, while the four vignettes at the bottom are larger and have more of a presence in the board instead of just floating in space. There is an important detail of how the new museum design connects to the original Saarinen building, and I wanted to play this up. I therefore separated it from the other vignettes and again related its location to the elevations.

Not much changed with this board. I felt the layout worked well. The only thing that I thought needed adjusting was the size of the building roof plan illustration. I felt it competed too much with the board 1 site plan. As with the other boards, the illustrations at the bottom are too desaturated and for some reason I faded them out haha. 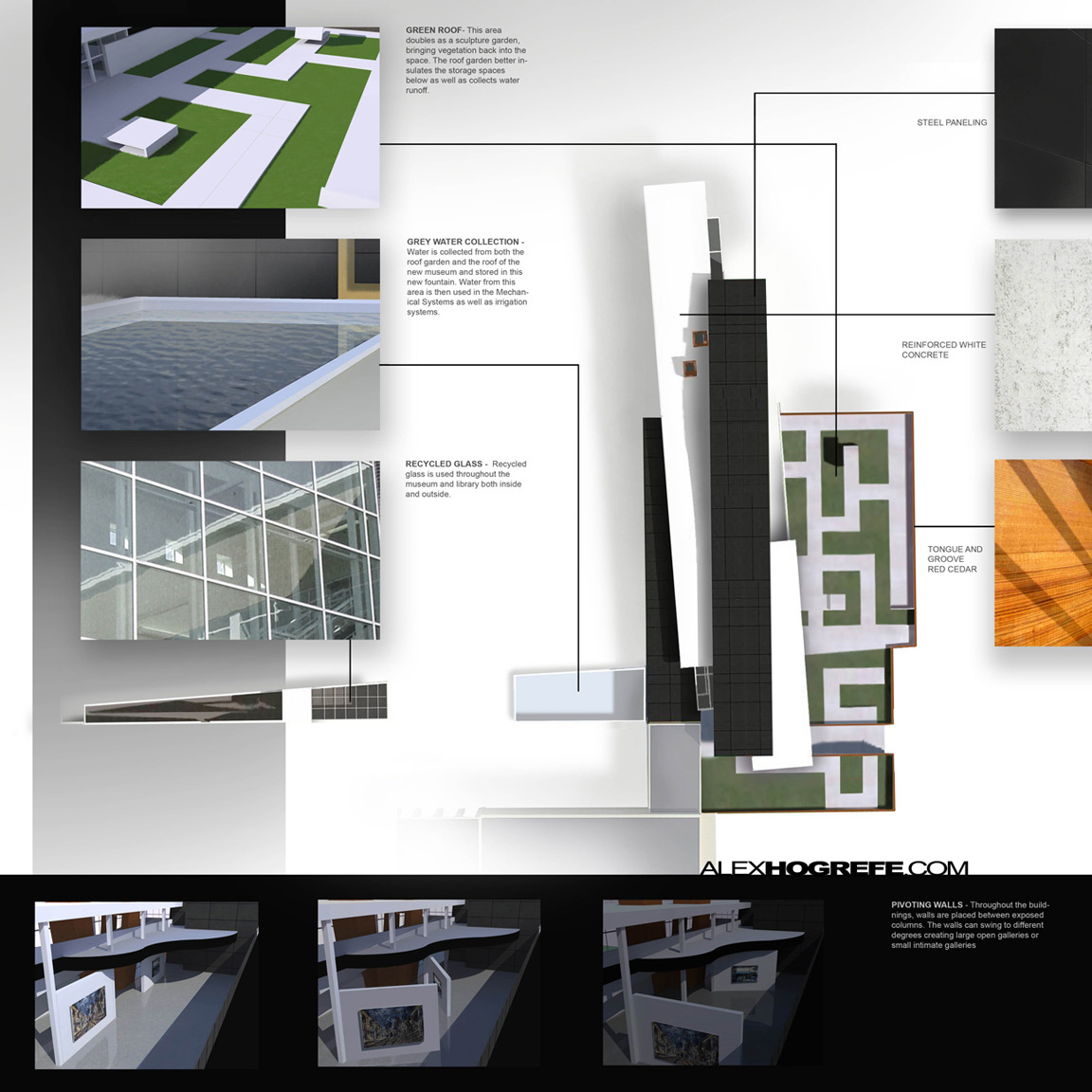 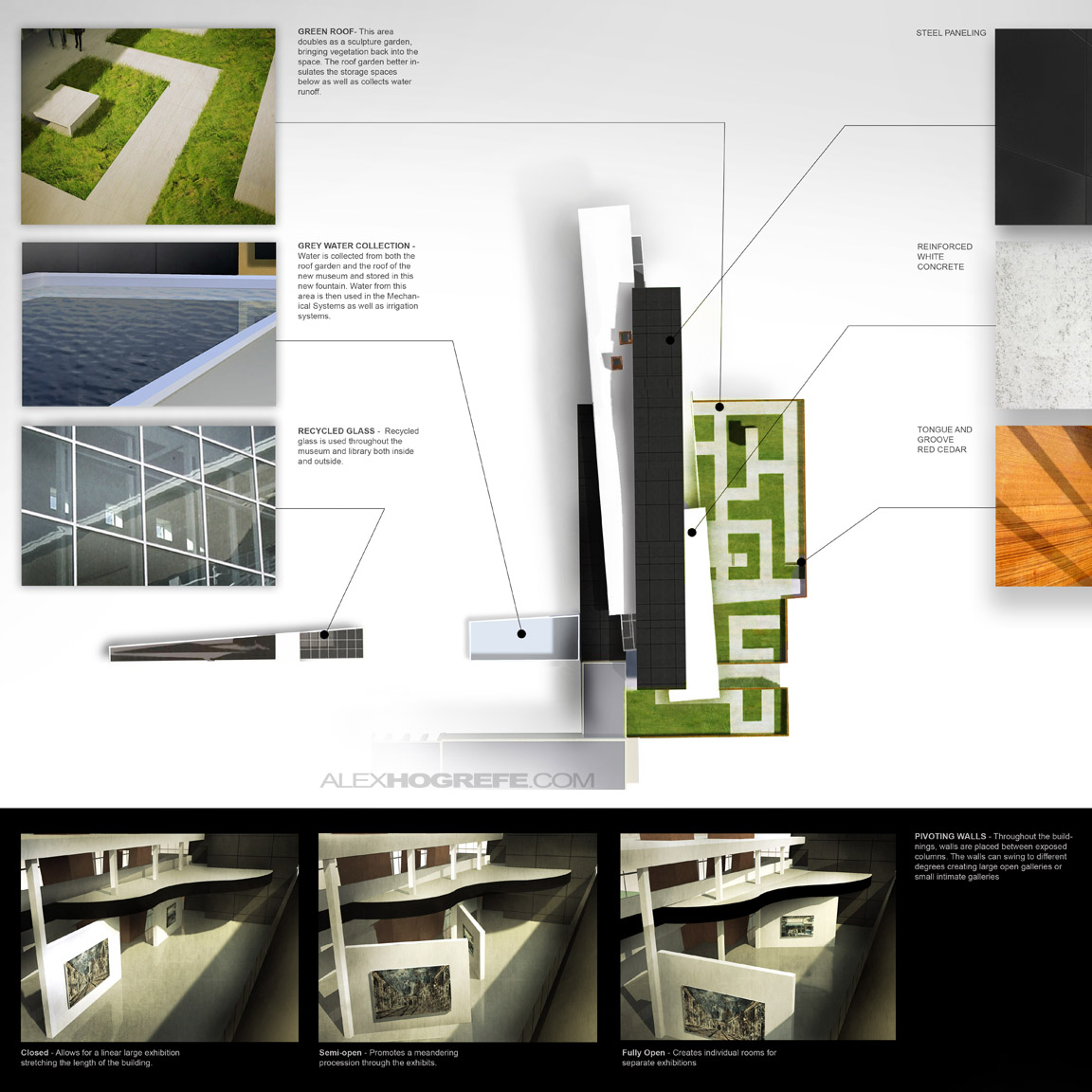 As you can see, the two are relatively similar. I shifted some things around so that the grid of the new board would relate to the grids of the other new boards. I also added some tone and textures to some of the illustrations.

With just some simple color corrections and minor composition moves, I was able to make some dramatic changes to the feel of the competition boards. The original structure of the boards is still there, but this time I erred on the side of simplicity and clarity vs. quantity of information. 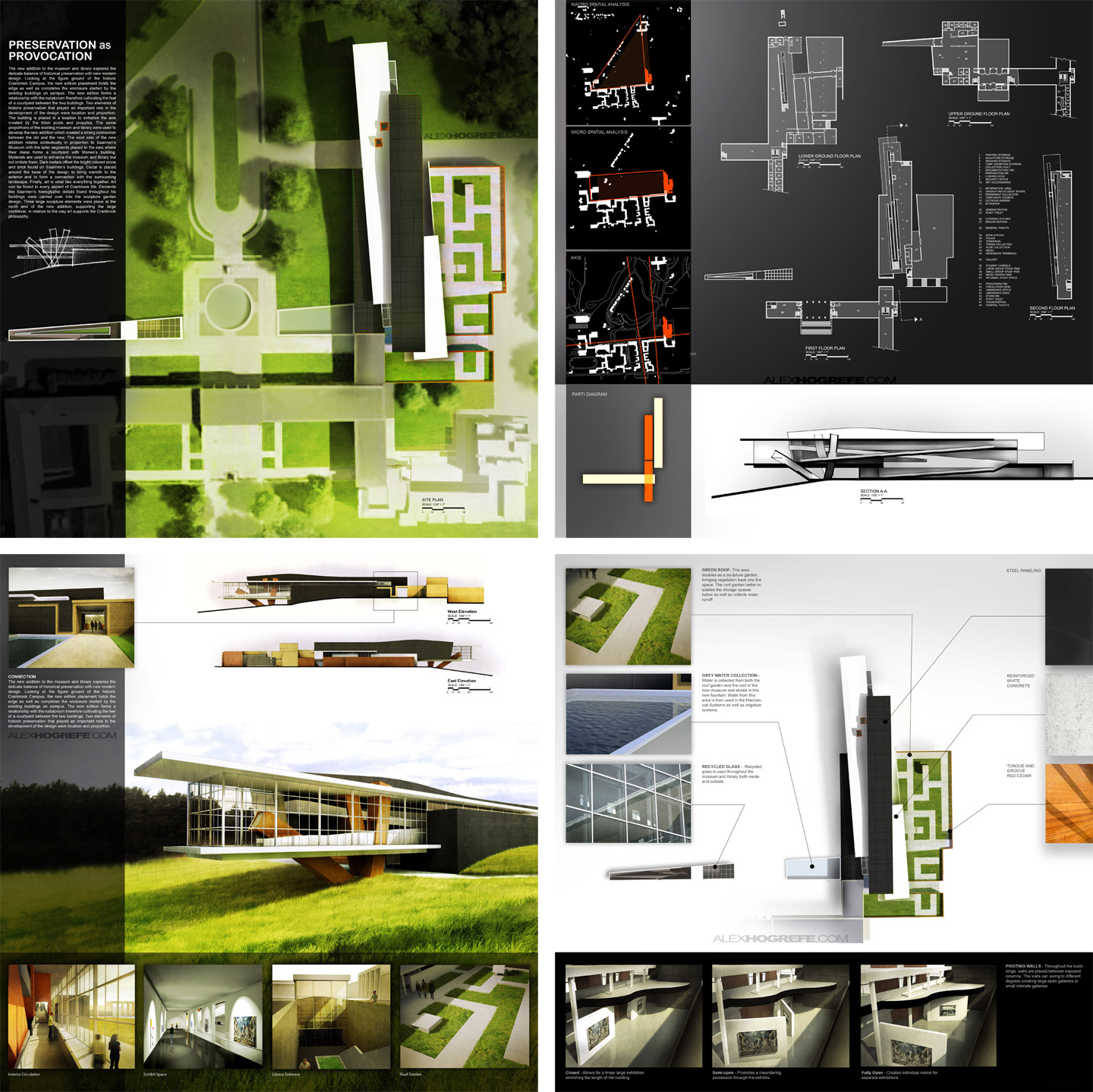