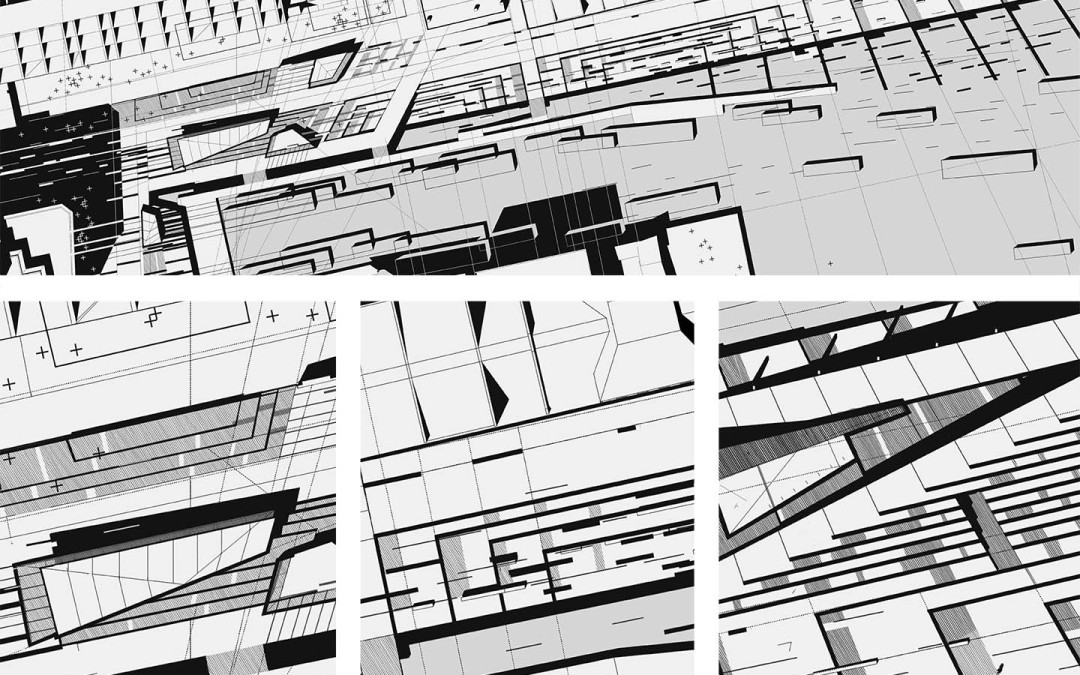 The last few posts have been focused on diagramming the existing conditions of the site. In this latest post, I have shifted to studies for the new design. The overall concept and form of the Sketchup model is established, but now I am interested in exploring texture. I trid to keep things abstract before getting too specific with thoughts of actual materiality and color. The above black and white approach was one way for me to keep thinking conceptually without losing myself in the details. As much as this image looks “finished”, the workflow was very much a loose and explorative process. Many iterations and ideas were tested. Changes in line weights, shadows, and hatches helped define hierarchy and texture qualities.

From here, I expect the illustration to continue to evolve as the project is refined and more decisions on form and material are made. The process of creating an image like this in Photoshop is “sketchy” in nature which lends itself well to exploring ideas along side 3D modeling. Later on down the road, I may begin introducing color as ideas of materiality become more concrete.

Below is a quick breakdown of how the image was created. Everything was made in Photoshop except for the initial line work and shadows which were exported from my Sketchup model. For the most part, I used the Brush Tool to create most of the elements. I also applied drop shadows and strokes to the elements when needed. 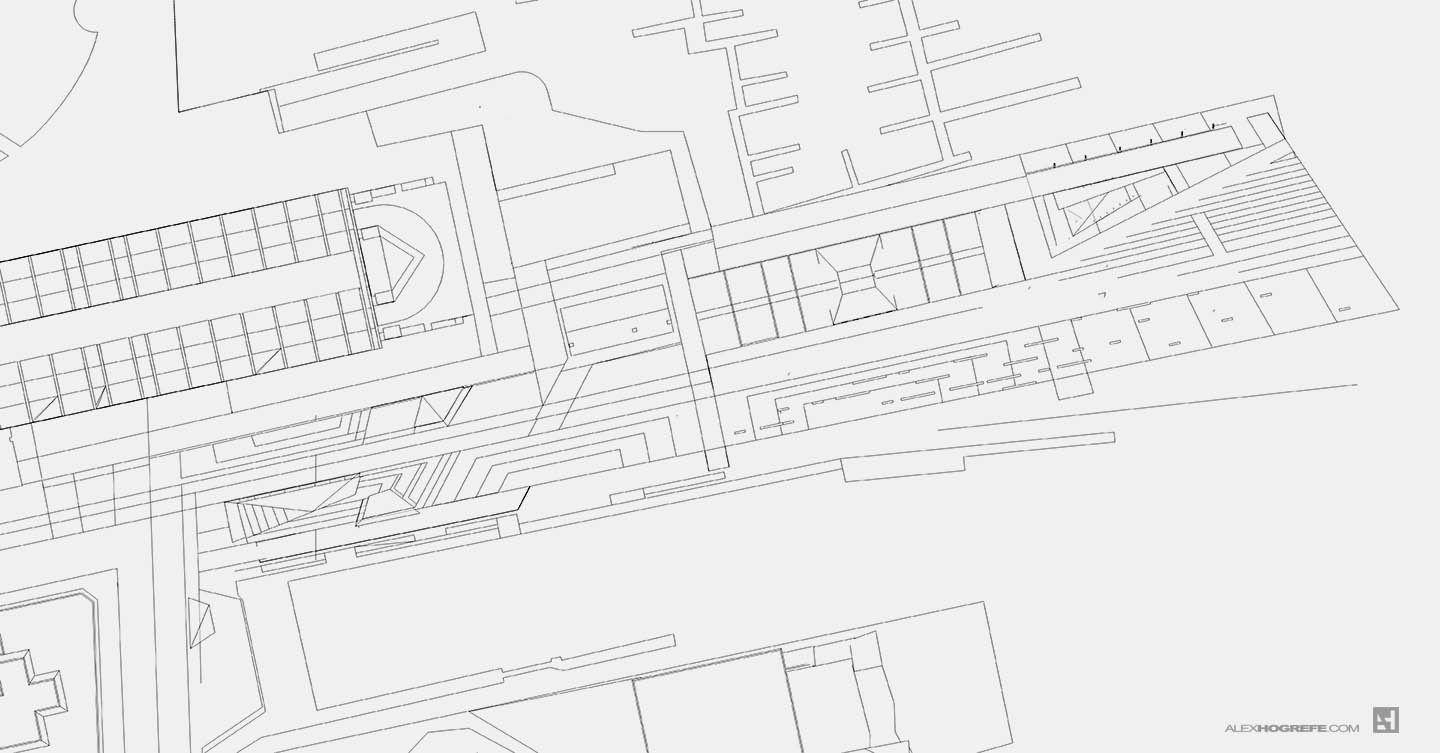 I adjusted the levels to take the shadows from grey to black.

I darkened the water slightly to better clarify the relationship of water to land.

Thick profile lines were added to punch up important elements of the design.

Simple rectangles with shadows were used to represent the boats in an abstract manner. These were then copied many times to imply movement.

The thick dashed lines represent an abstraction of several elements of the existing site. Density and location were determined by topographical changes and potential pedestrian traffic.

A second layer of thinner dashed lines were added. These are hierarchally weaker than the thick dashed lines and could represent a change in material among other things.

A final layer of shading was added to highlight potential locations of green space.

Though the workflow has been broken down into a very systematic explanation, the actual process of creating this image was not as clear cut. As mentioned above, it was a very iterative process where all of the element were slowly built up together through additive and subtraction means. There was a lot of copying, pasting, transforming, and scaling. Less focus was placed on craft and more on a relaxed and experimental process. 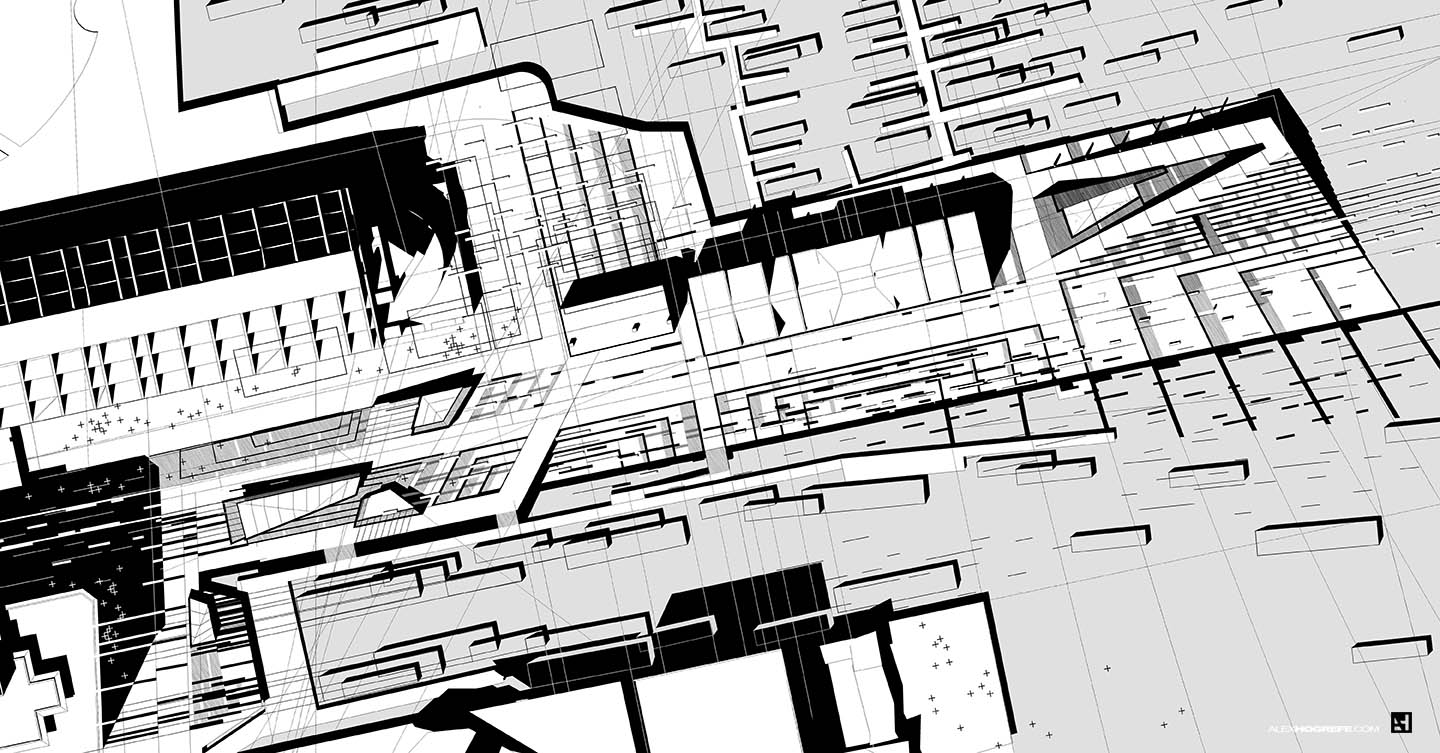