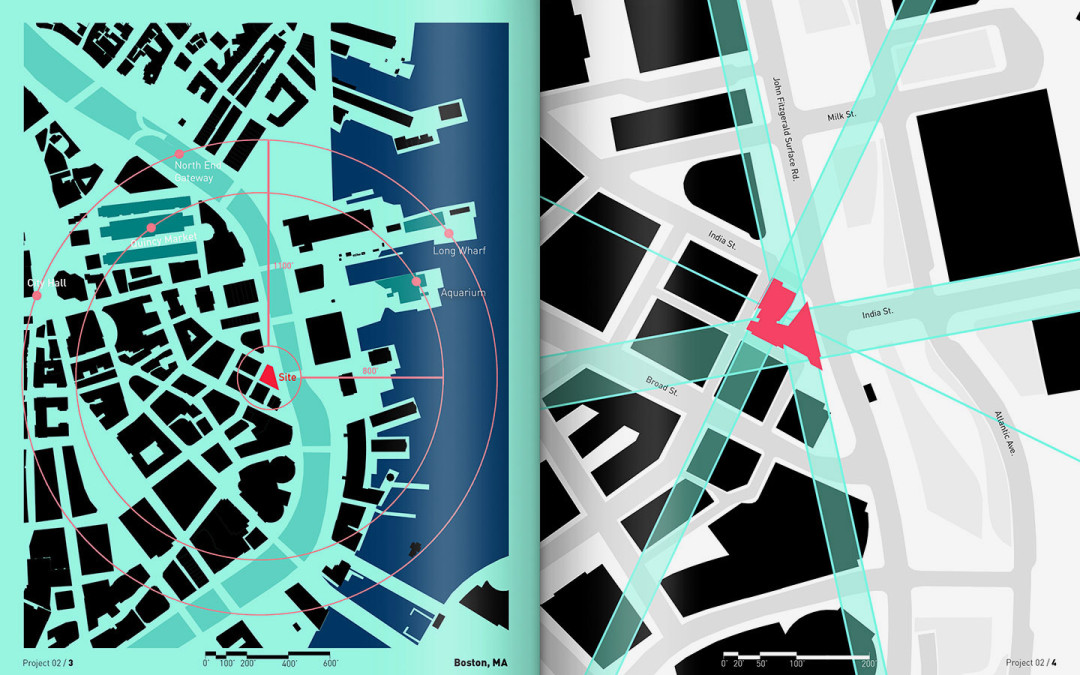 It has now been several months of working on this latest project from which lots of imagery has been created. I’m ready to start compiling all of this information into portfolio spreads similar to what I did for the wharf project. Anyone that reads this blog knows that I love designing portfolio spreads and presentation boards. I like seeing all of the parts of an architectural project come together and the complexity information get organized into a single story. For this latest set of spreads, I followed suit with the wharf project and combined several styles of visualization in a single project. I prefer this approach of using different styles because it keeps things interesting and better engages the viewer.  I also like to switch up the layout typology from spread to spread such as going from a full bleed illustration into a vertically based layout that then transitions into a horizontally based layout, etc. It can get difficult creating good flow from one spread to another with so much change in style so I use subtle moves to “connect” the pages. In this case, the same teal color was used in varying amounts to relate the pages as well as the same font style and size. It’s this dance between keeping the viewer engaged while not confusing them that generates a good portfolio design in my opinion. 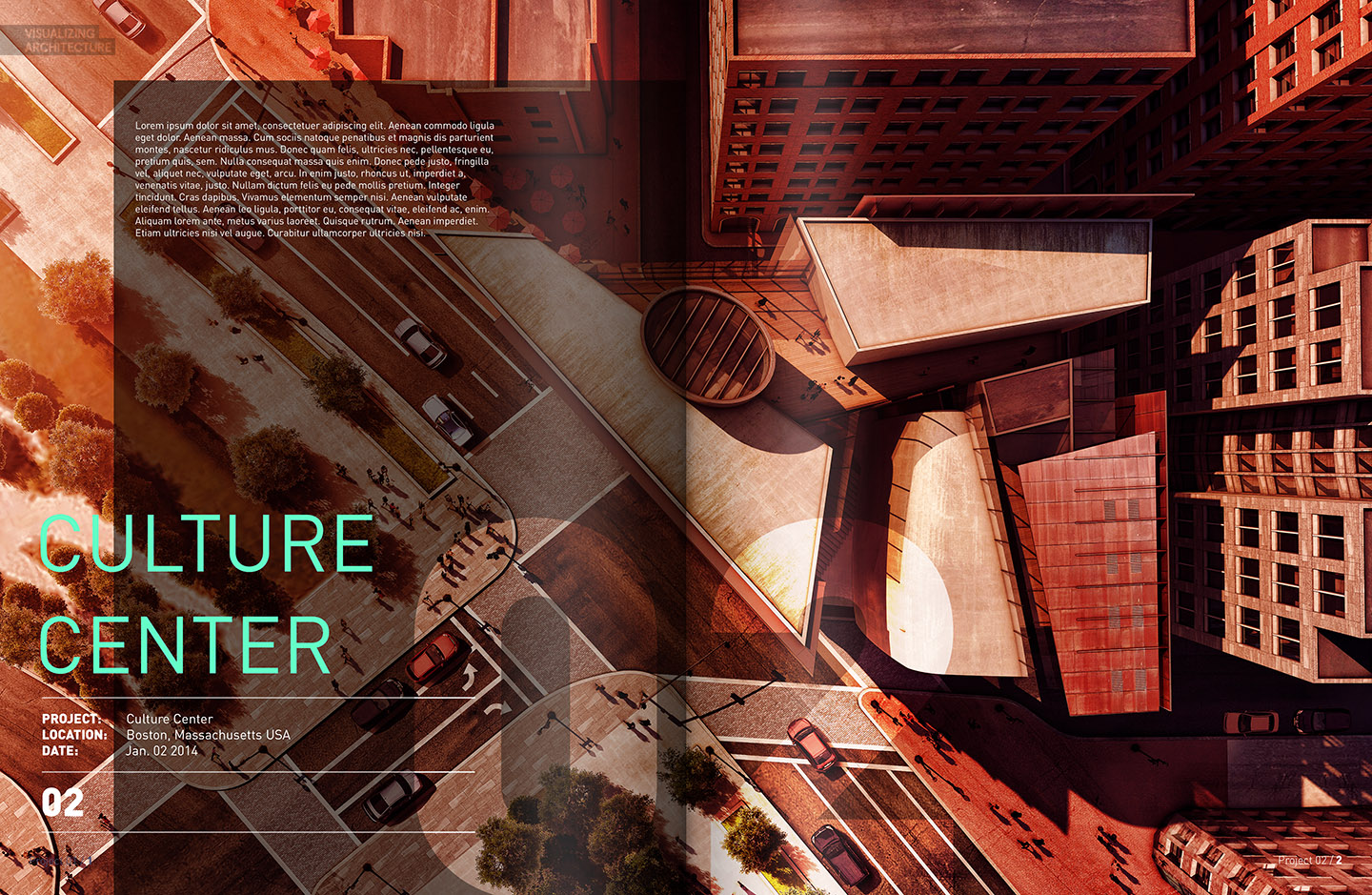 I typically like to start a project off with a brutally simple layout and large text signifying the start of a new project within the portfolio. One of my biggest pet peeves is looking through someone’s portfolio and not knowing where a project ends and another one begins. 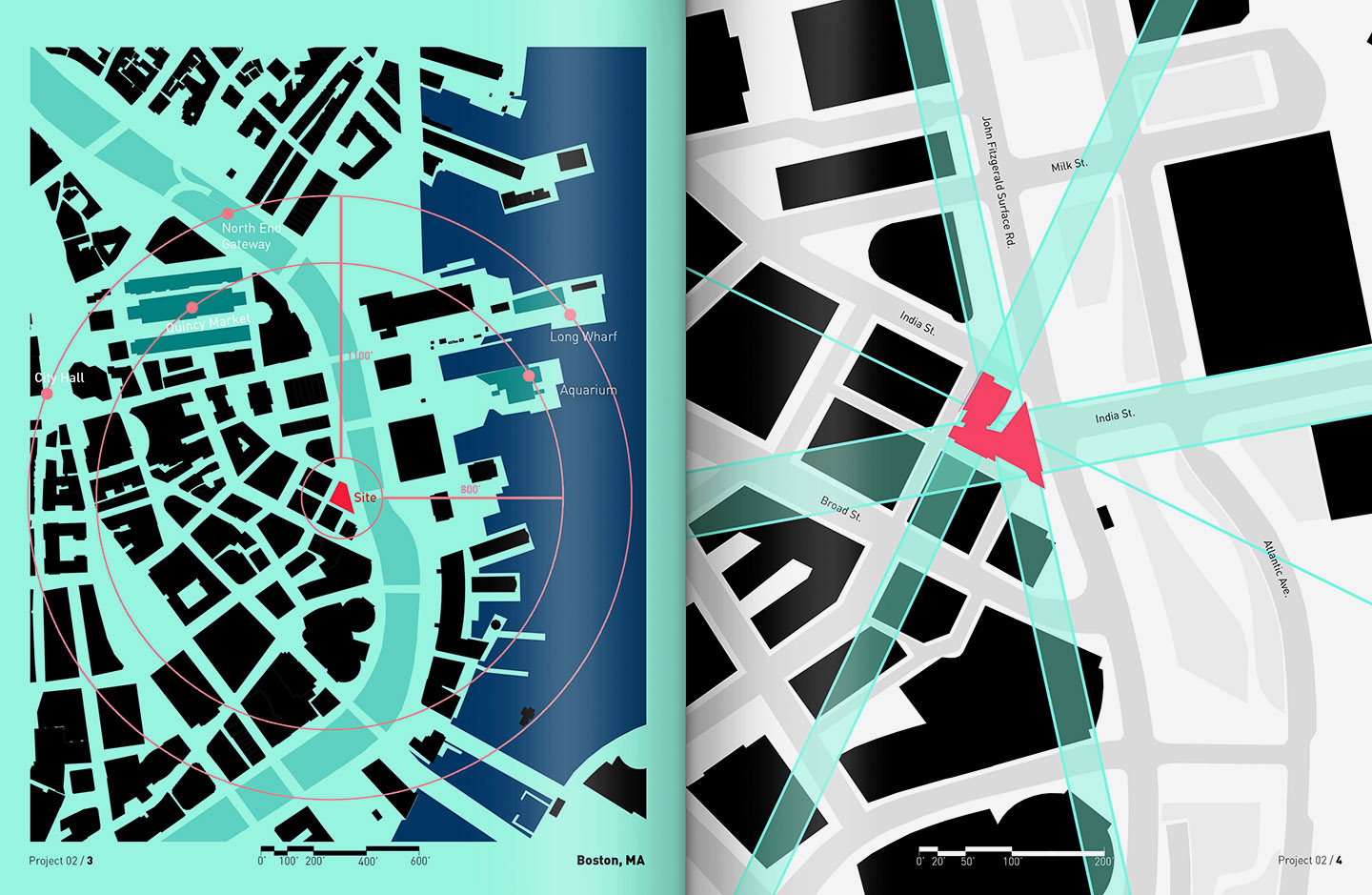 I also think it is important to have a spread early on in the project describing the location and orienting the viewer. 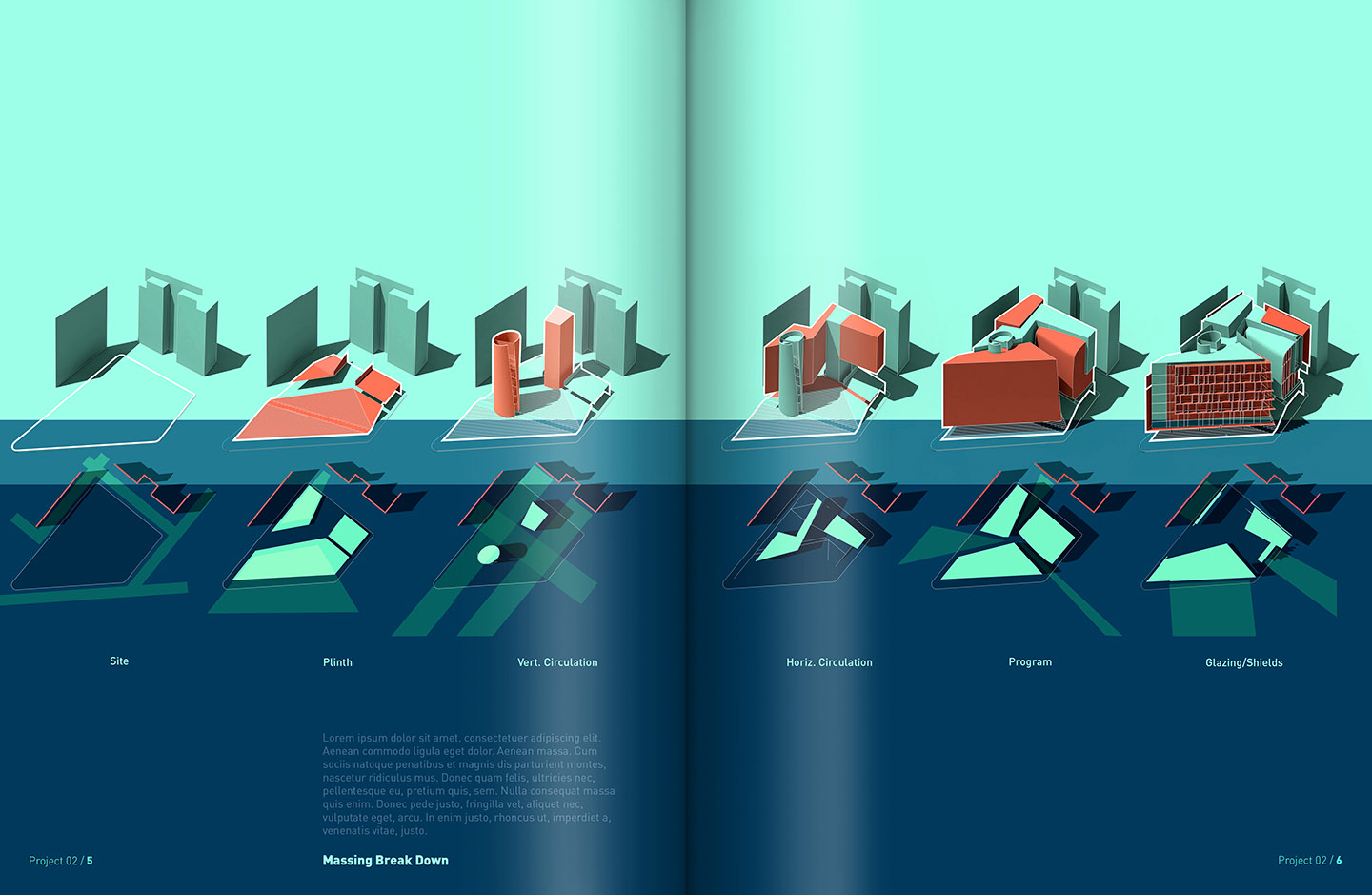 From there, I introduced the form and a break down of how and why it was designed the way it was. 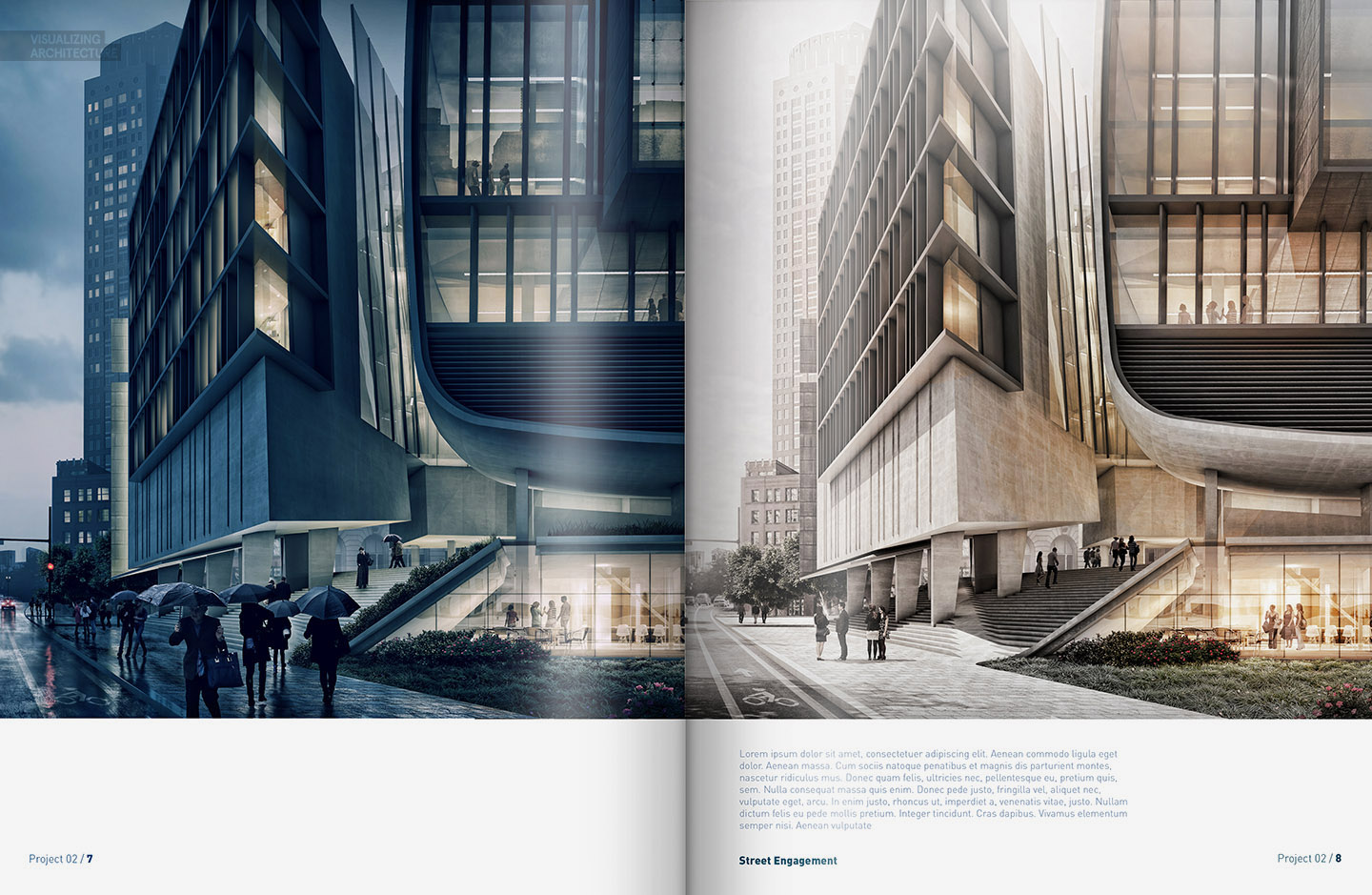 At this point, I though it would be interesting to jump out of diagram mode and into some vignettes at street level. The previous spread talks about the street engagement diagrammatically so these spreads will go into more depth on the subject. 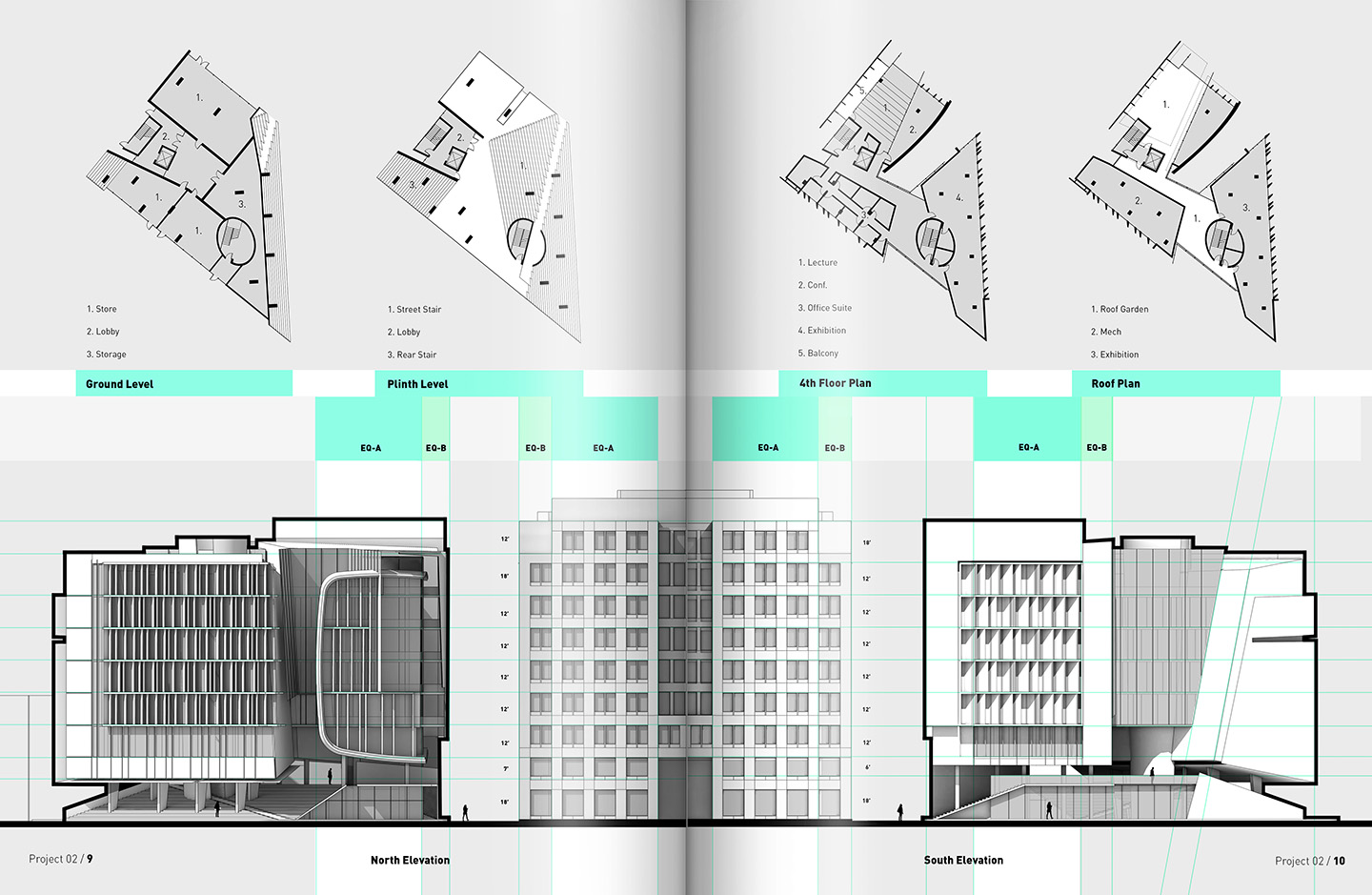 I’m not into rendering out floor plans but instead prefer to keep them extremely diagrammatic and easy to read. I also like to combine floor plans with elevations and sections so that the viewer can better see the relationship between them. One thing that I need to fix with this spread is to size down the elevations to be the same scale as the floor plans and add graphic scales. This will help avoid any confusion and aid in the reading of the page. 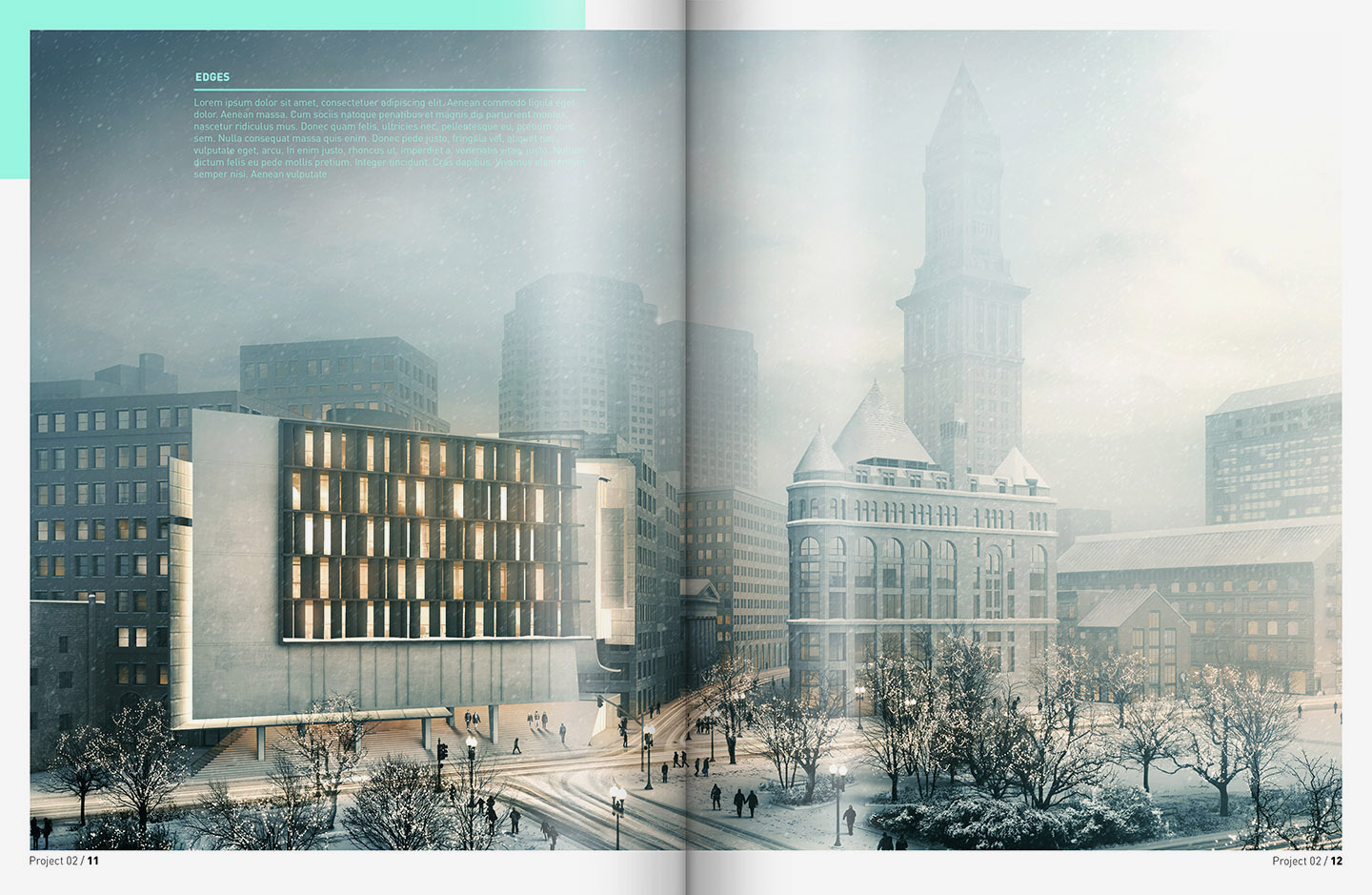 The snow scene seemed like a good image to end the project on because it is memorable but also because it is a view of the entire design and shows its relationship to the surrounding context.

Time to move on to the next design. If you have any suggestions for what the next project should be, leave me a comment or send an email.