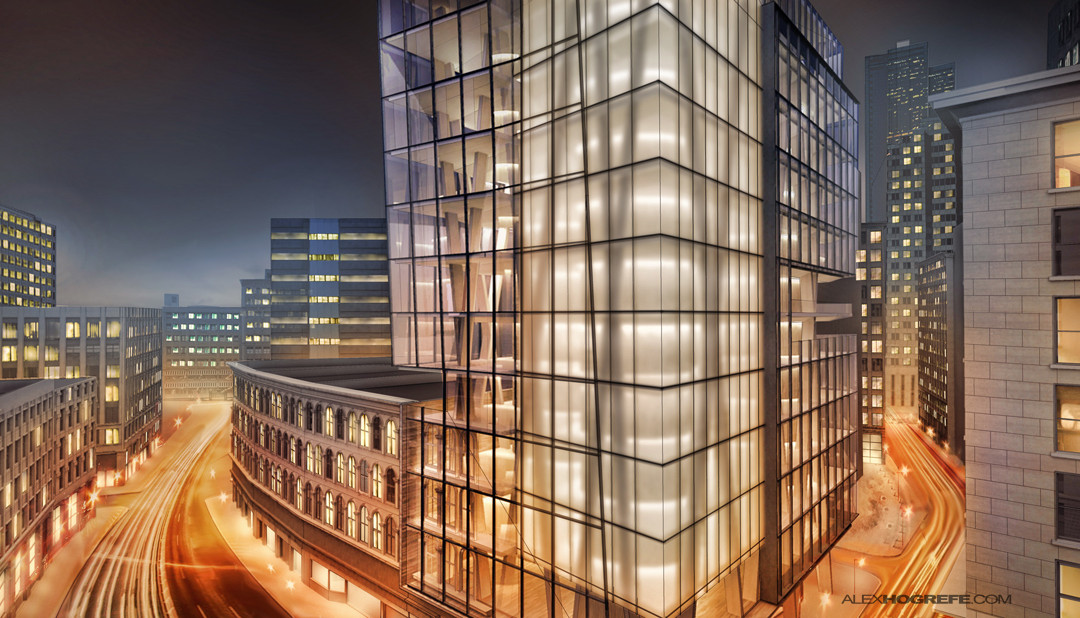 I’ve been wanting to do this illustration ever since I first built the Sketchup model a month ago. A couple of areas that I focused on was the semi-transparent glass in the tower and activating the streets down below. I set up the model last night and let it render in Kerkythea over night. I began post processing in PS this morning and finished about 8 hours later. In terms of time spent on post processing, this image is up there as one of the longest that I have done. I also chose a view that is somewhat unconventional in the sense that both the top and the bottom of the tower are cut off. I wanted the shot tighter on the tower facade focusing on the semi-transparent glass. The image is broken down further below.

Because of the size of the model and the amount of lights, not to mention the weak processing power of my computer, the Kerkythea rendering took all night to finish and then some.

Once in Photoshop, I first looked at creating a semi-transparent glass for the tower. I wasn’t real sure how it would turn out, but after some experimenting, I was able to get the look close to what I was imagining. The workflow is incredibly easy. I will see if I can put together a detailed explanation in the near future.

Once the glass was looking half way decent, I moved to finding the correct textures for the background buildings. I used Google street view to find most of the building facades. Because the buildings are so small in the background, I didn’t need high resolution images. Therefore, the street view screen shots were more than sufficient.

I next moved to the street. I have created only a few urban illustrations in my day, but I have found that the key to a successful urban rendering is having an active street life. In other words, adding brightly lit streets with lots of activity and movement. I ran out of time towards the end of the day, but I would have liked to add loads of people to complete the “active street life” vision.

The final step involved me spending hours painting light in all of the windows. With the computer that I have, there is no way that I could have rendered light using Kerkythea. Not only do I not have the computing power, but it would have taken me forever to prepare the Kerkythea model and place all of the lights within the buildings. Instead, I just painted in the lights one by one. Luckily, it’s mindless work which means I was able to watch the playoffs and paint at the same time.