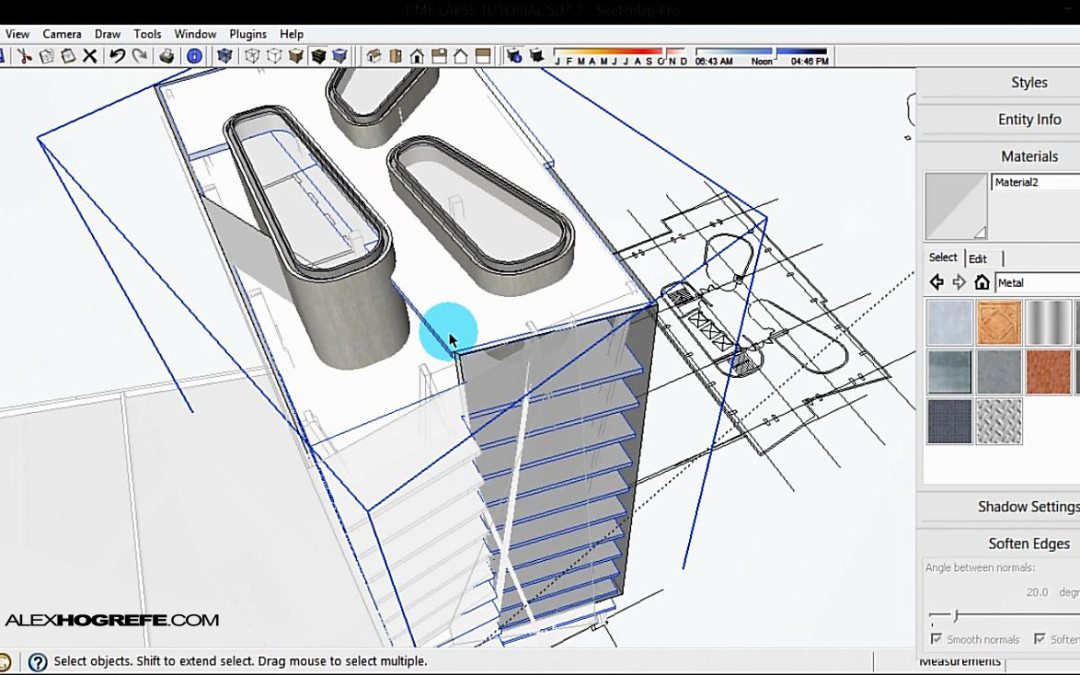 I thought it would be interesting to put together a timelapse video showing the basics on how I built the urban tower seen in the past few posts. A couple of things to note about this video is that I didn’t spend a lot of the time with the finer details such as placing every single mullion or fully finishing the roof. Instead, I focused on building a good base from which I could later make alterations or add more detail. Whenever I begin building a model, my primary focus is to have an editable model. Everything in the model is grouped and then placed in subgroups. This is important so that I can move sections of the model out of the way to get to other parts, so that I can isolate certain elements, or so that I can quickly make selections without fear of selecting things I don’t need. I also make extensive use of components such as the case with the columns, floor plates, and mullions.
I consider this a “finish” model meaning a lot of the decisions have already been made concerning form. Prior to this model, I created a series of massing studies testing out different design concepts and structural ideas. Once I’ve honed in on the final form, I then rebuilt the model investing more time into the details.
The video can be broken down into a few steps:
1. Import Geometry 00:07 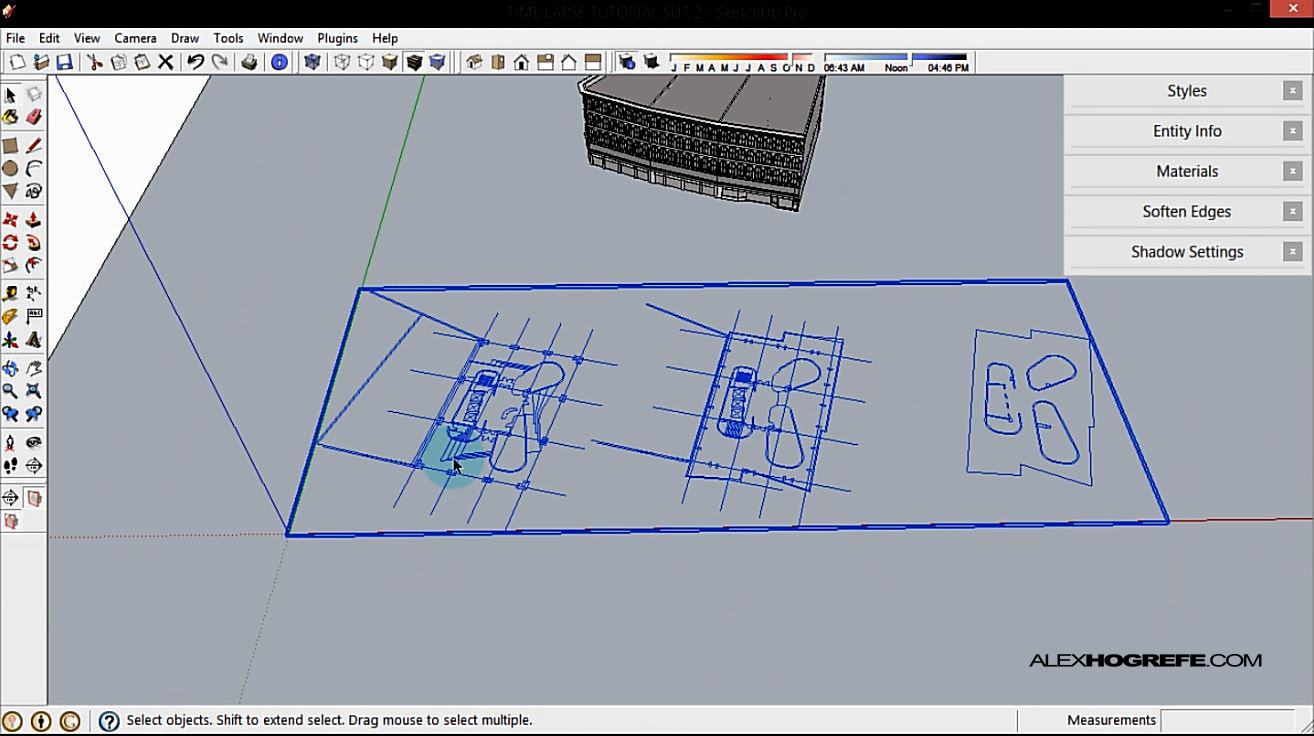 Typically when I am building a “final” model, I am working off of a floor plan either developed in CAD or Revit. You can see in the video that the floor plan that I imported had some elements separated so that I could easily group and mass them out (such as the elevator core). A few other things to note: I have to downsave the CAD file to 2004 to import into Sketchup. Also, double check that the units all match before importing. Often in the office, we have projects that are both in Metric and Imperial and I am always catching myself importing with the wrong units.
2. Build the Structure 00:16 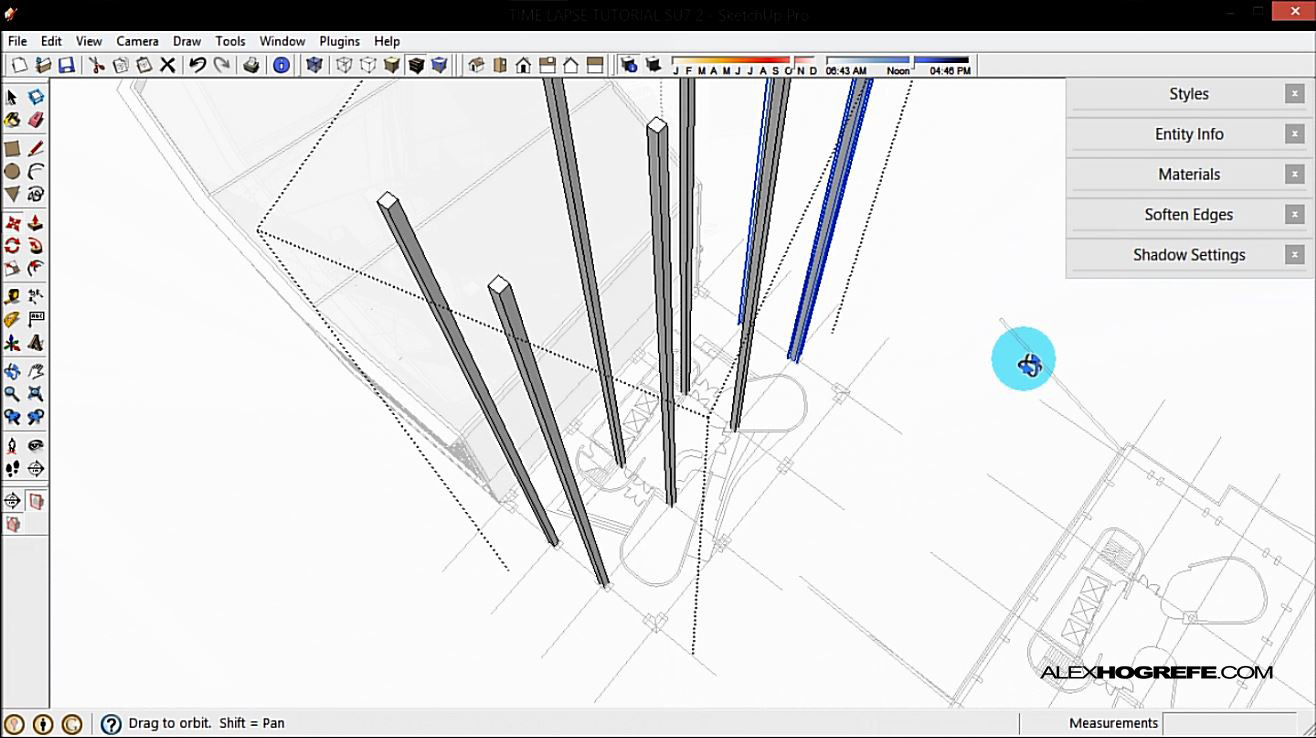 In the case of this tower, I started with the columns. I grouped all of the columns together, and then created subgroups separating the perimeter columns from the interior columns. All of the columns are components so that I can quickly change their size or profile later on if needed.
3. Floor Plate 00:40 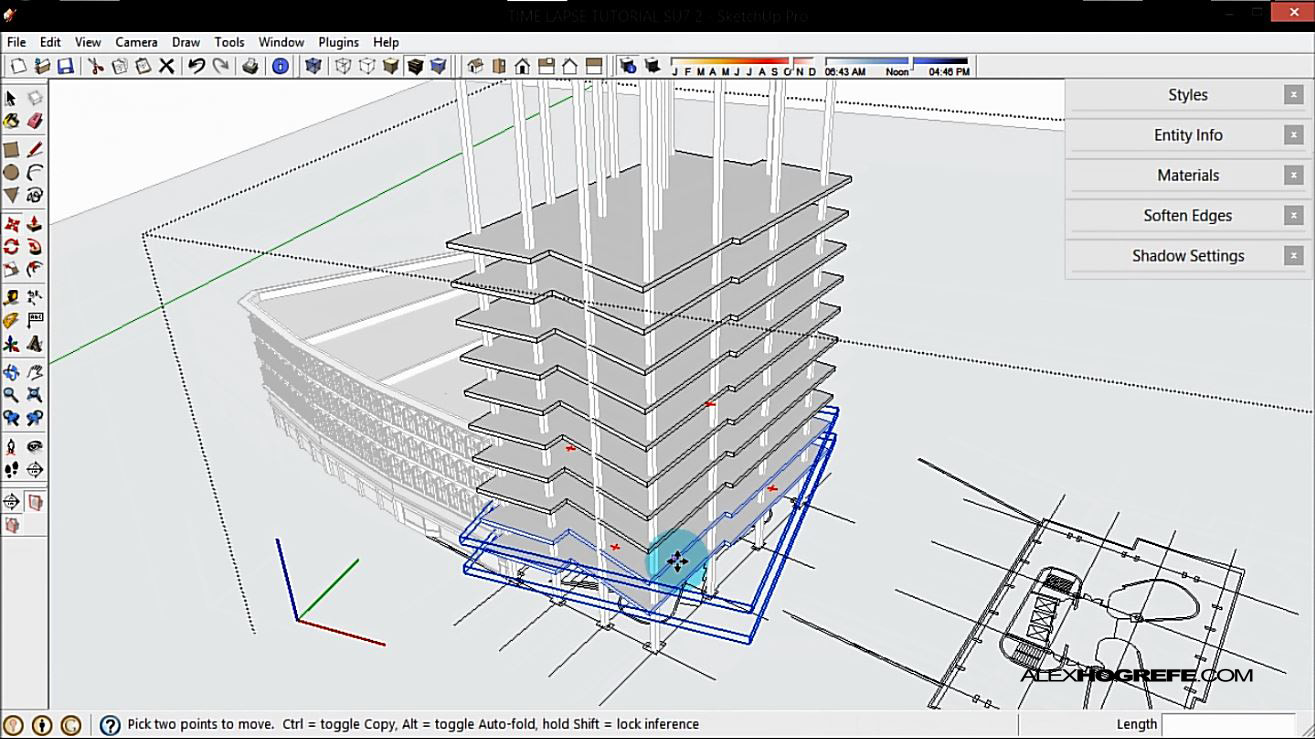 Next came the floor plates which are grouped separately from the columns. Because the floor plates don’t change much from floor to floor, I turned them into components. This will save me time later on when I start to cut openings for elevator cores and stairs as well as adding details in the ceiling soffit and floors.
4. Core 02:57 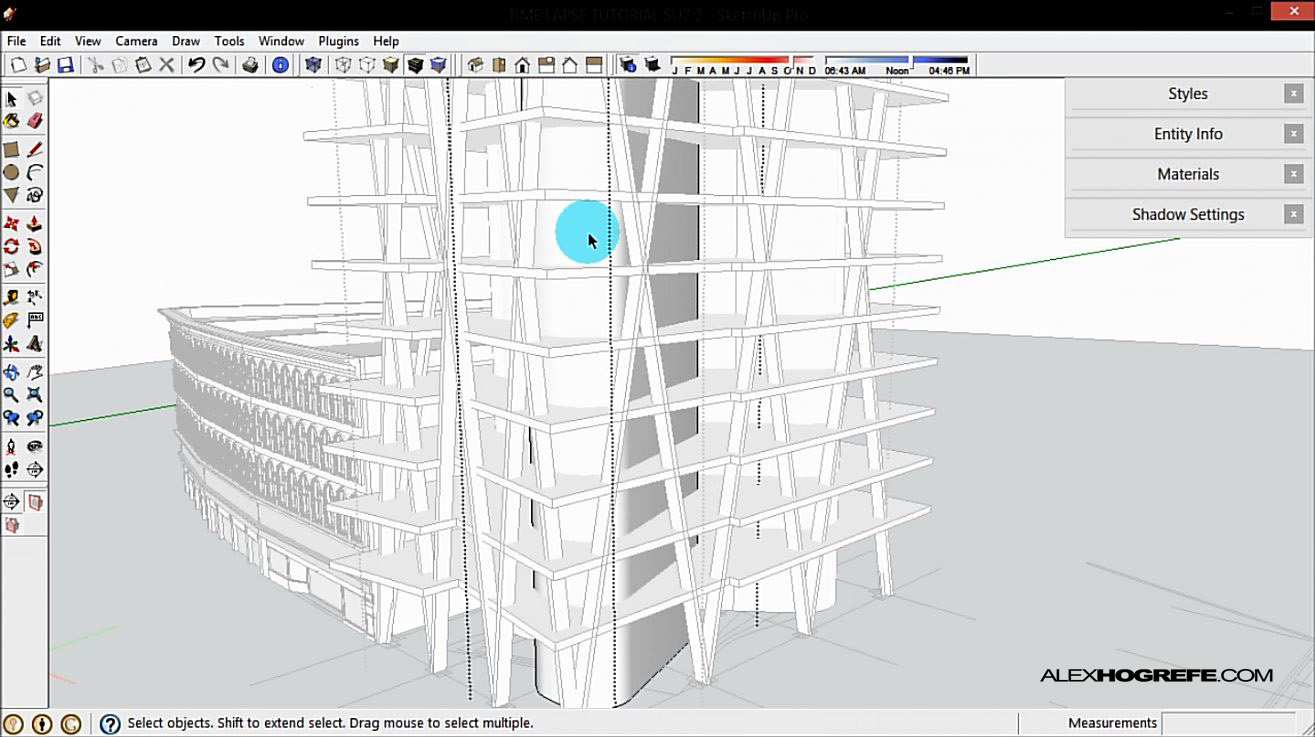 In this video, the cores are simple extrusions which again are grouped separately from the columns and floor plates. Later on, I will play with the massing by cutting openings and adding curtain walls. The columns, floor plates, and core are all relatively simple elements in and of themselves, but by combining them the model is already gaining a decent amount of complexity in a short amount of time.
5. Envelope 05:42 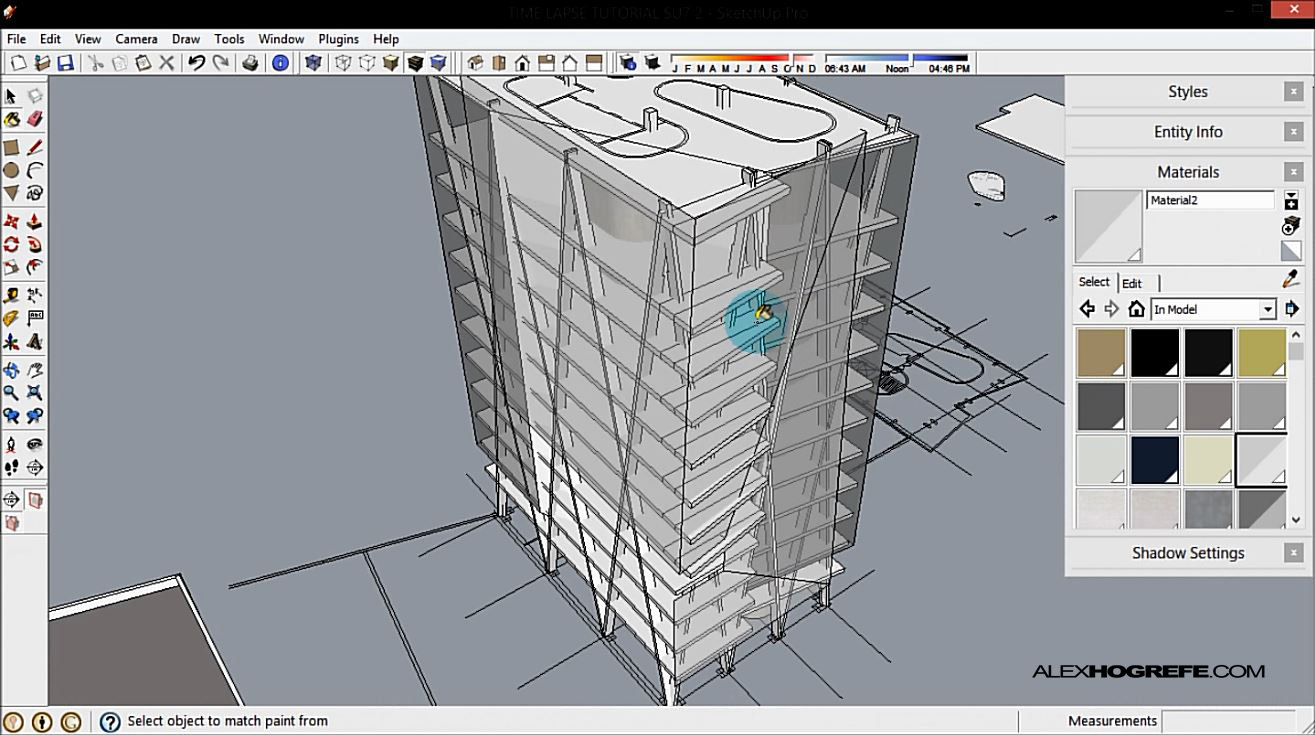 This is always my favorite part. For this model, the envelope is simple; glass. The envelope is made up of two different forms intersecting each other and therefore will be grouped separately. When I use glass, I don’t give it thickness. Instead, I build it as a single surface which makes editing much easier later on and also simplifies the rendering process. Besides, in the next step, I will be adding mullions which will give depth to the skin.
6. Detail, Detail, Detail 08:17 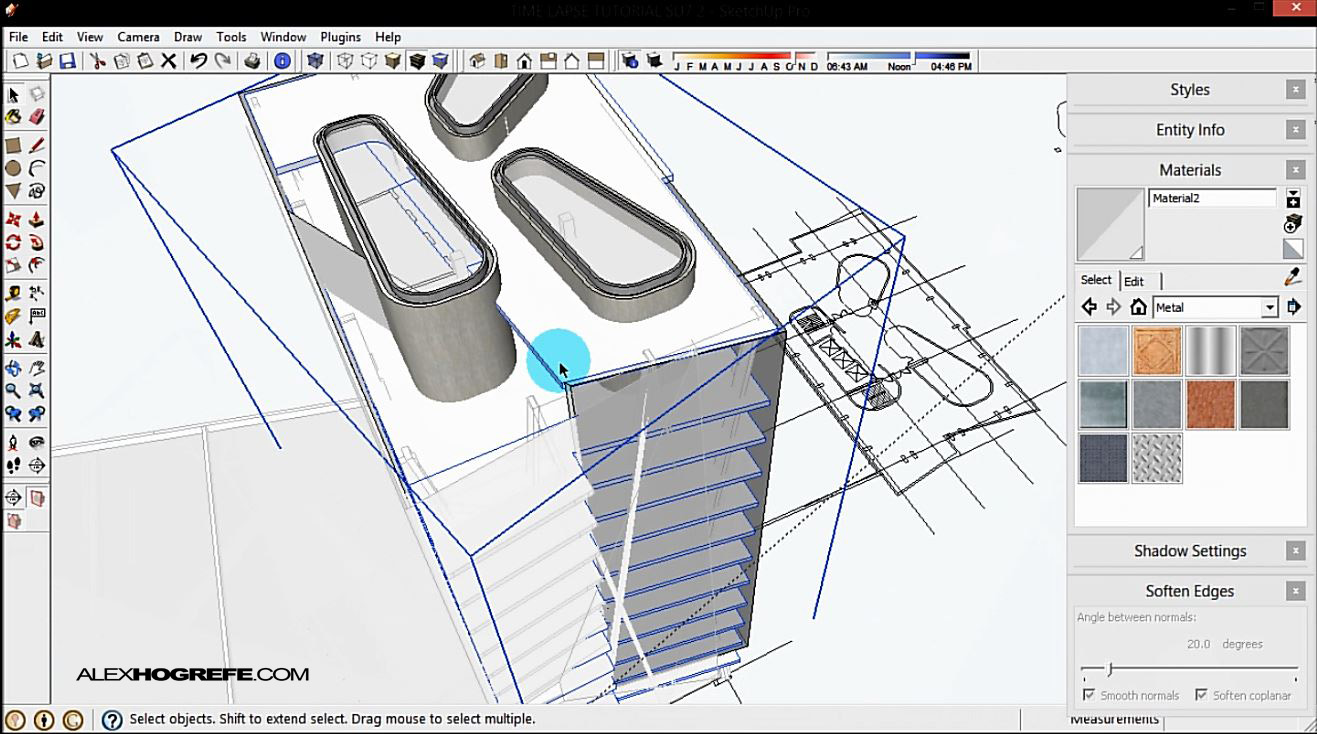 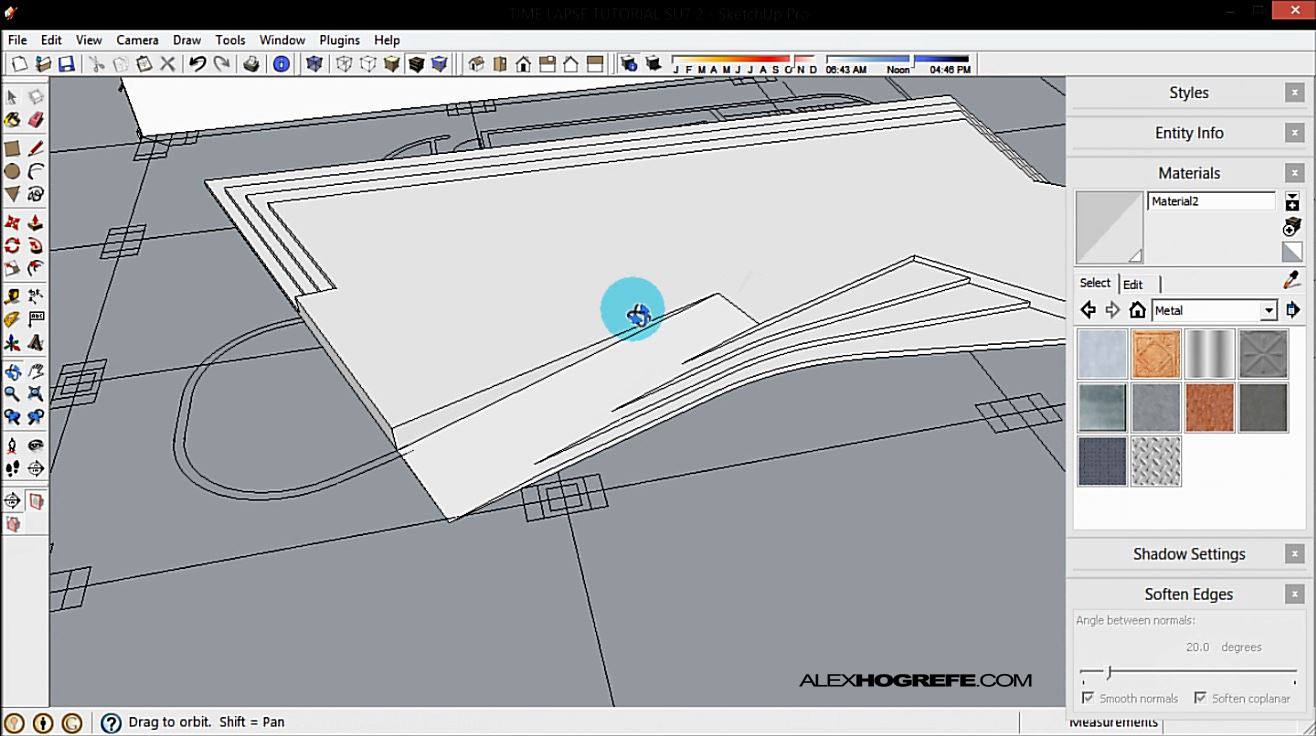 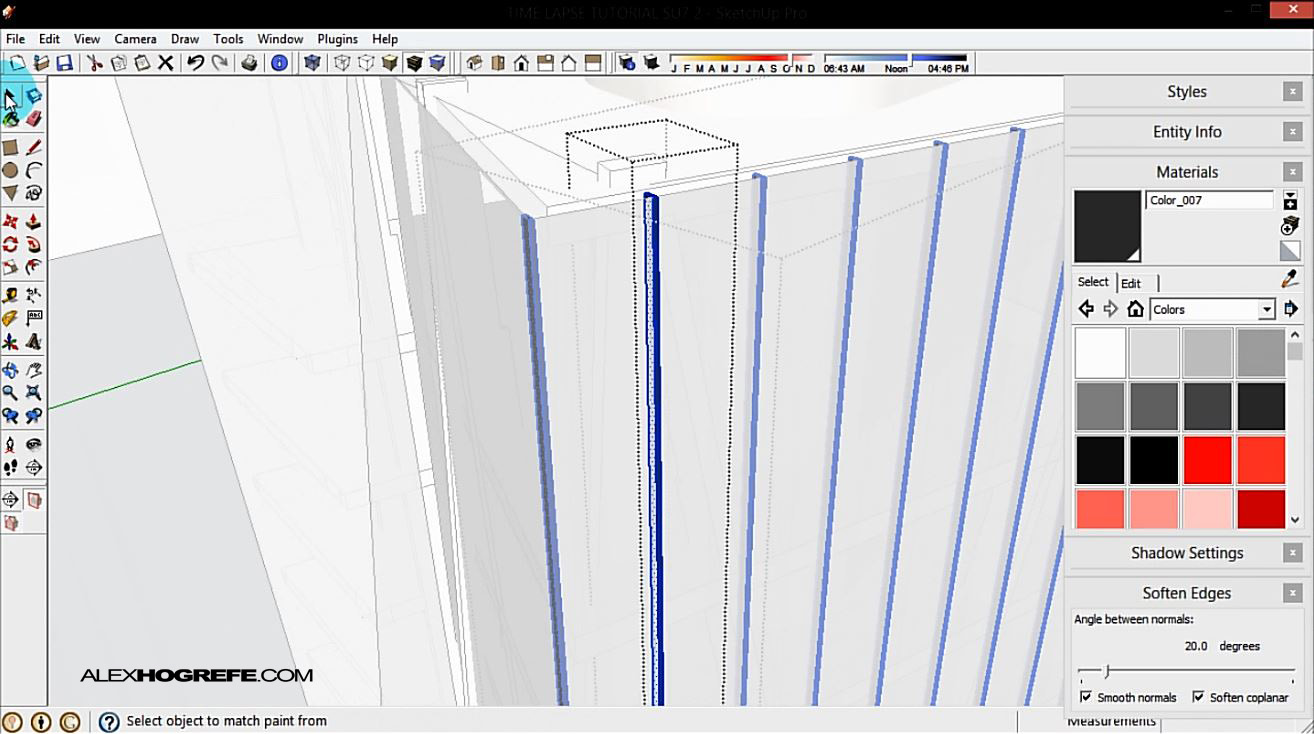 With the bones of the building complete and the skin added, it’s all detailing from here on out. This is the part that could go on forever, and where it can get a little fuzzy deciding when enough detail is enough. At this point in the video, I add elements such as the building base and mullions. Some things I still have left to model are interior walls, doors, ceiling soffit, and other minor details. Expect to see more renderings with this model in the future.