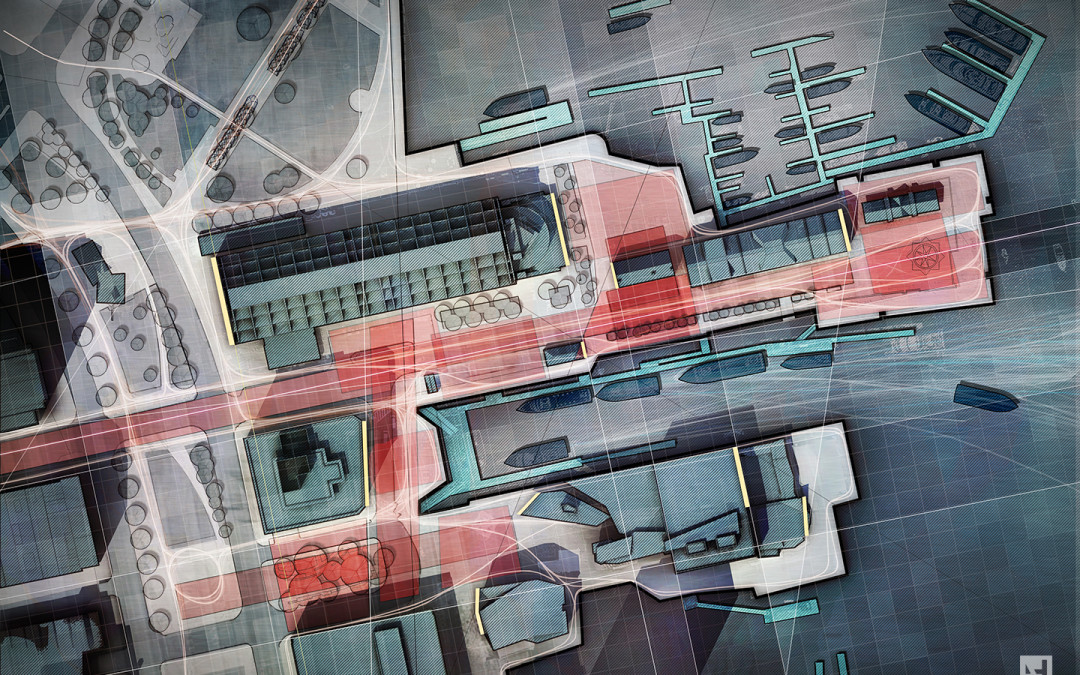 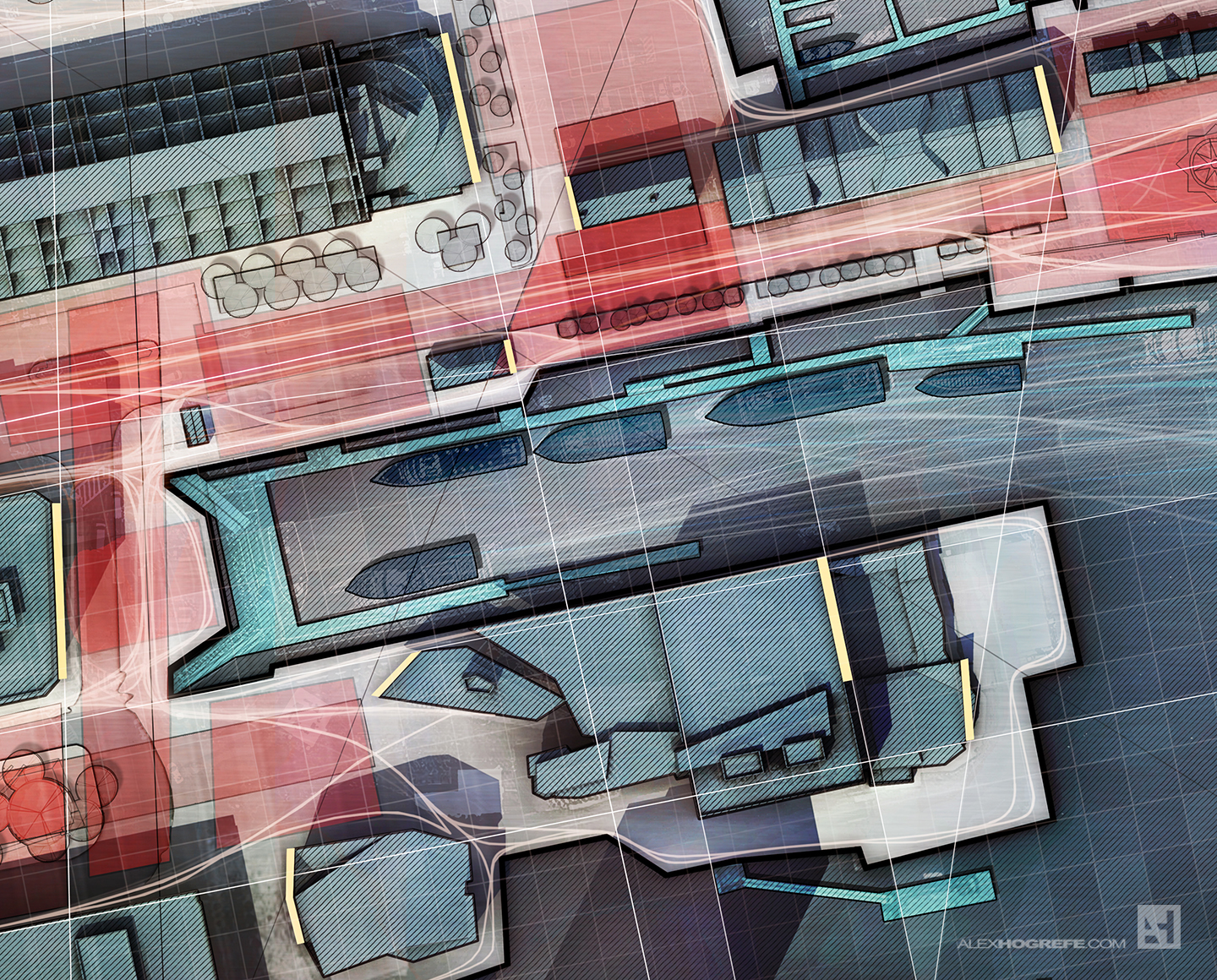 I have been experimenting with some site diagrams of the existing conditions of Long Wharf in Boston. I am mostly interested in introducing texture and depth to diagrams that are typically presented in a more simplified manner using solid colors and no gradients. Don’t get me wrong, I am a big fan of the “BIG” type diagrams which essentially strip down the graphics to the bare essentials to explain a concept of pharmacy. However, I want to go to the other extreme and see what kind of diagrams can be generated using lots of texture and shading.

Above is a composite image of several different diagrams layered together. Below are the individual diagrams. The goal was to give a slightly different graphical look to each diagram but have the whole series feel as if it came from the same family. These were all generated from one Photoshop file, but with different color overlays and levels of saturation applied to each. 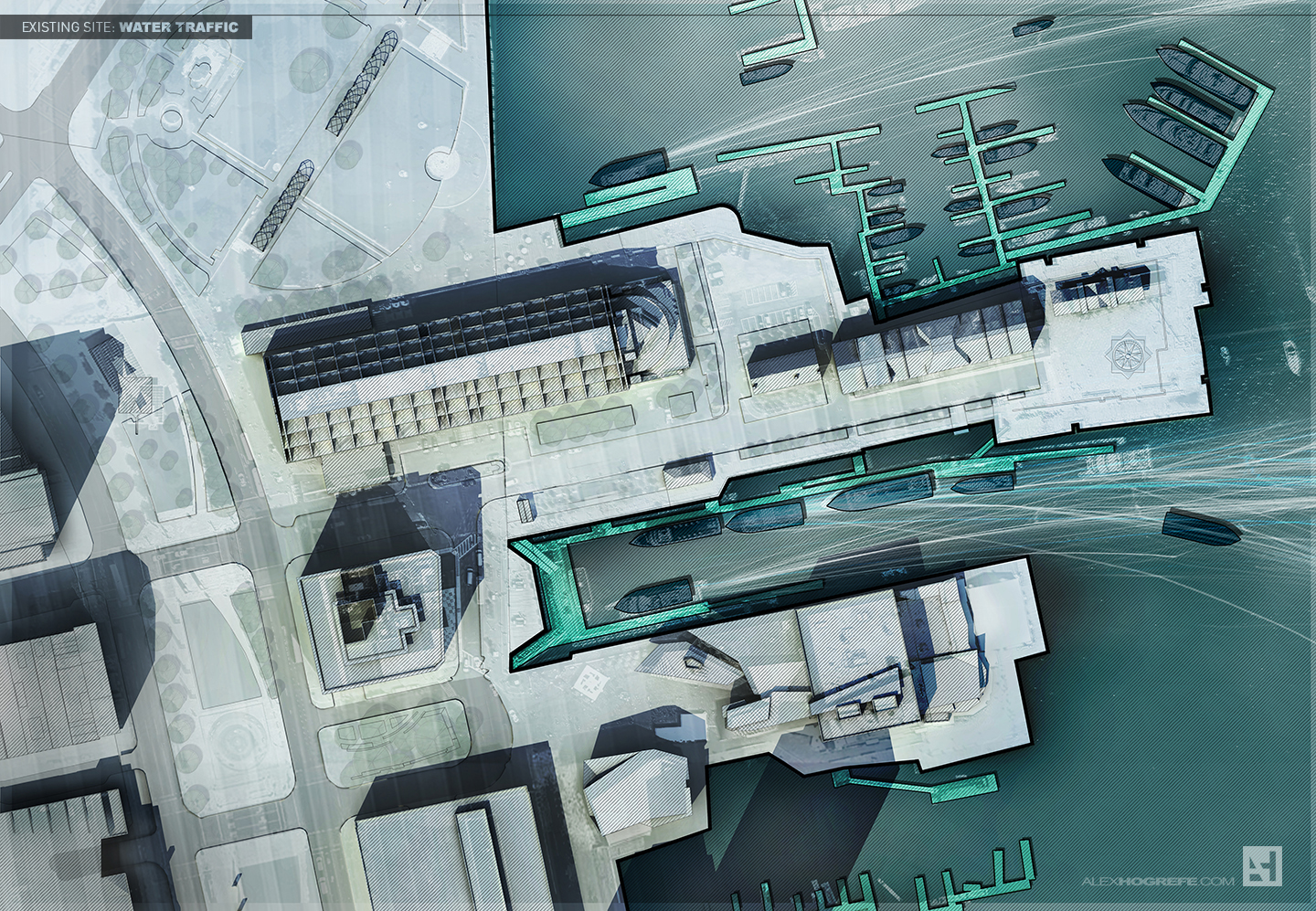 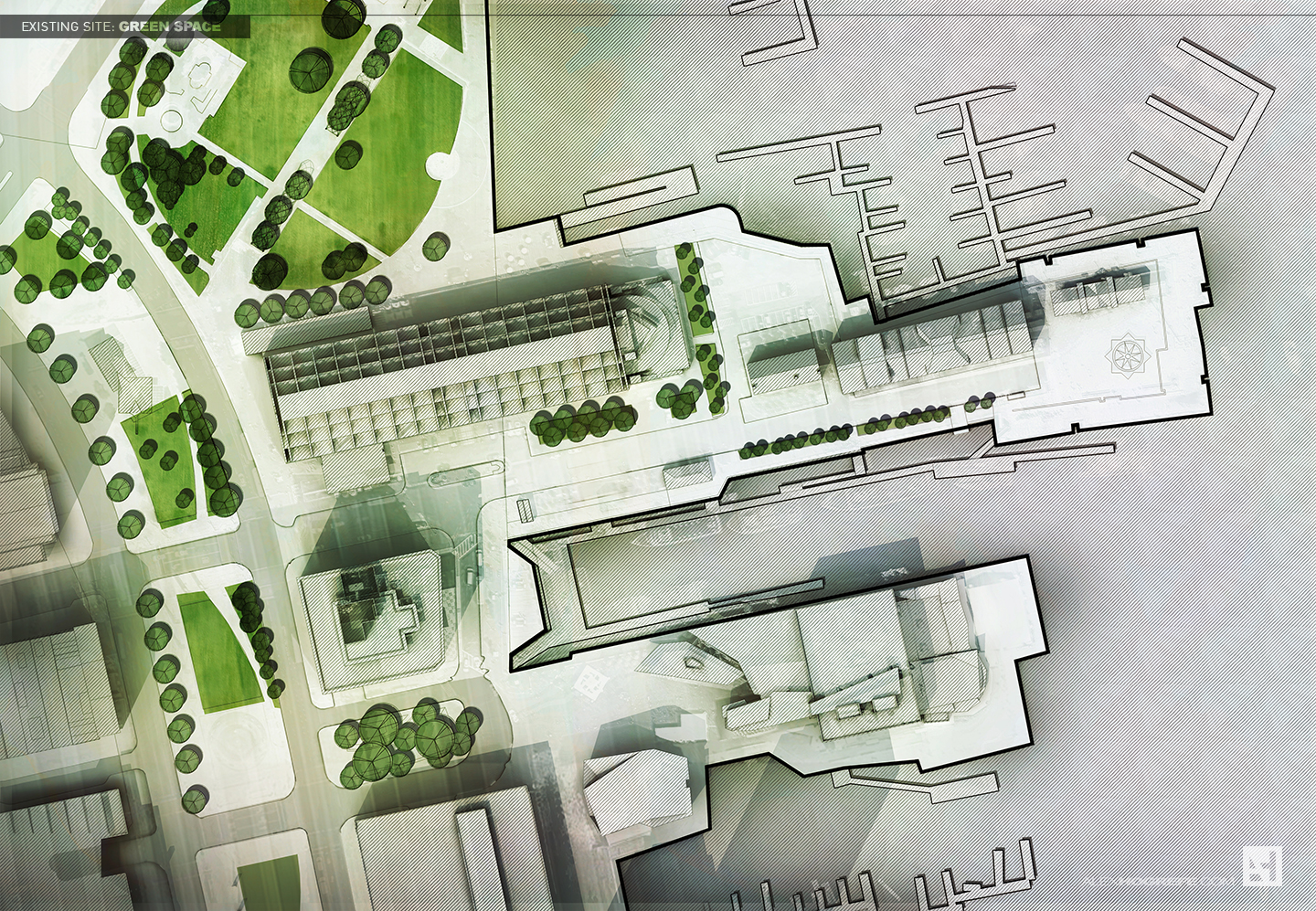 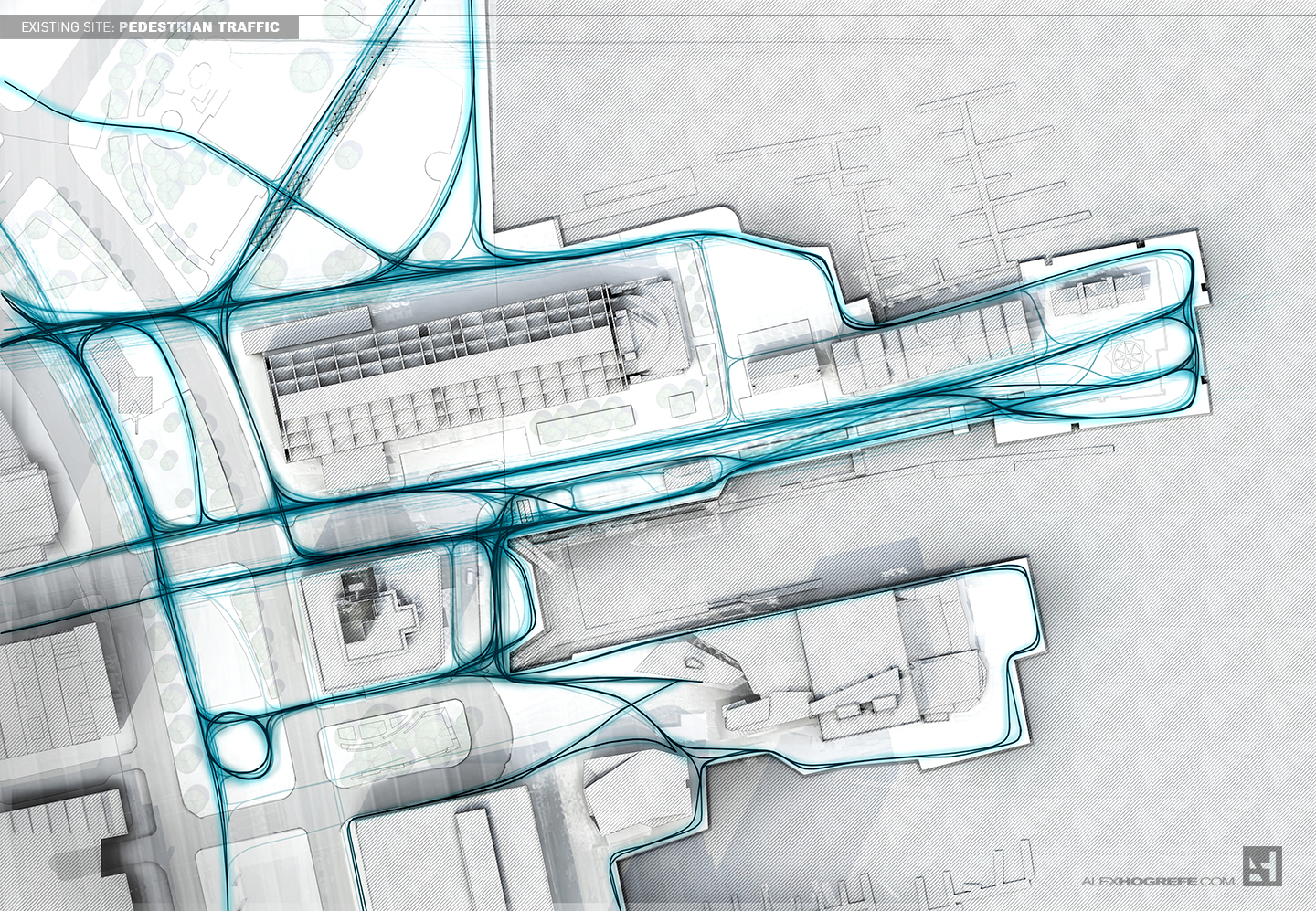 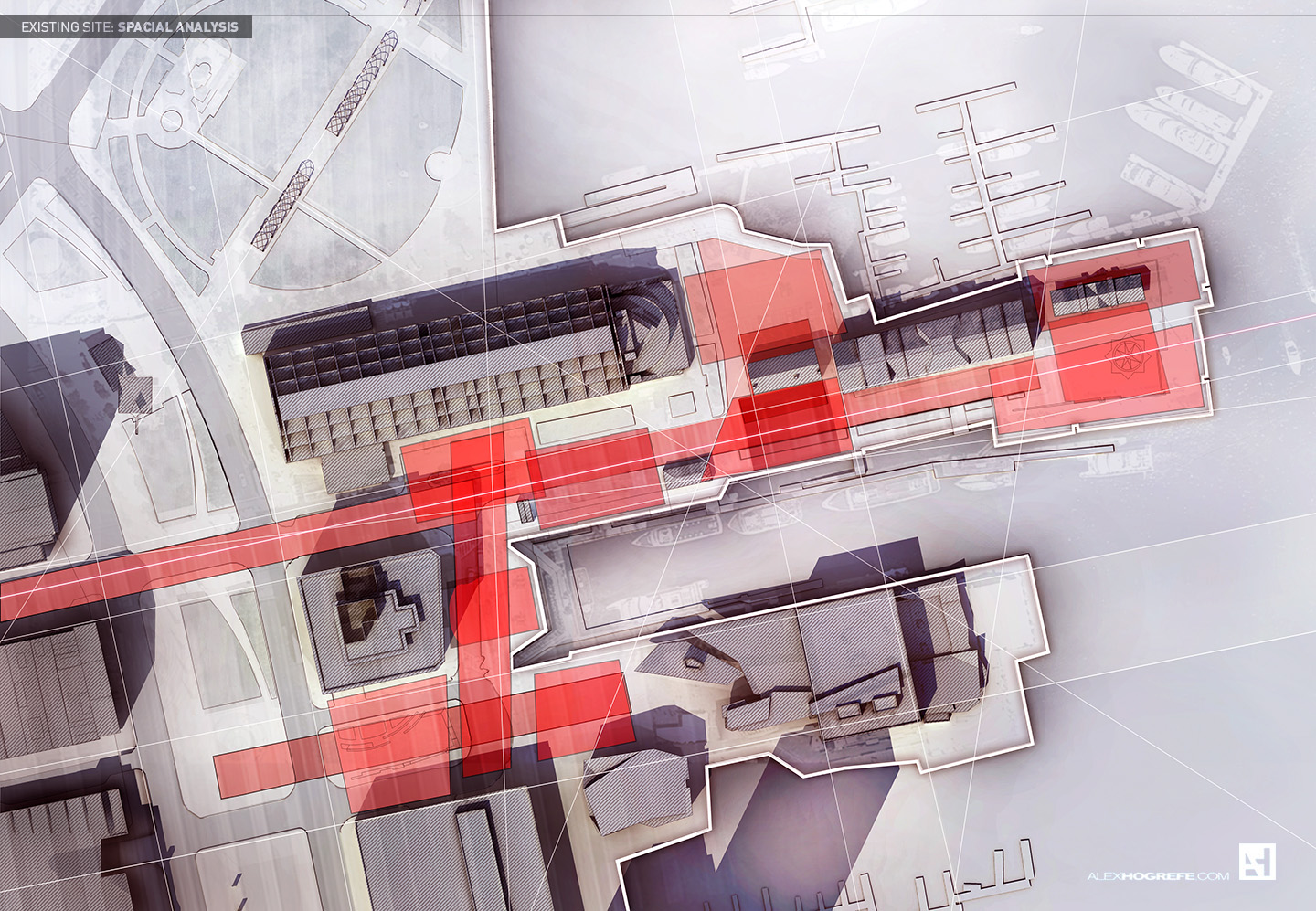 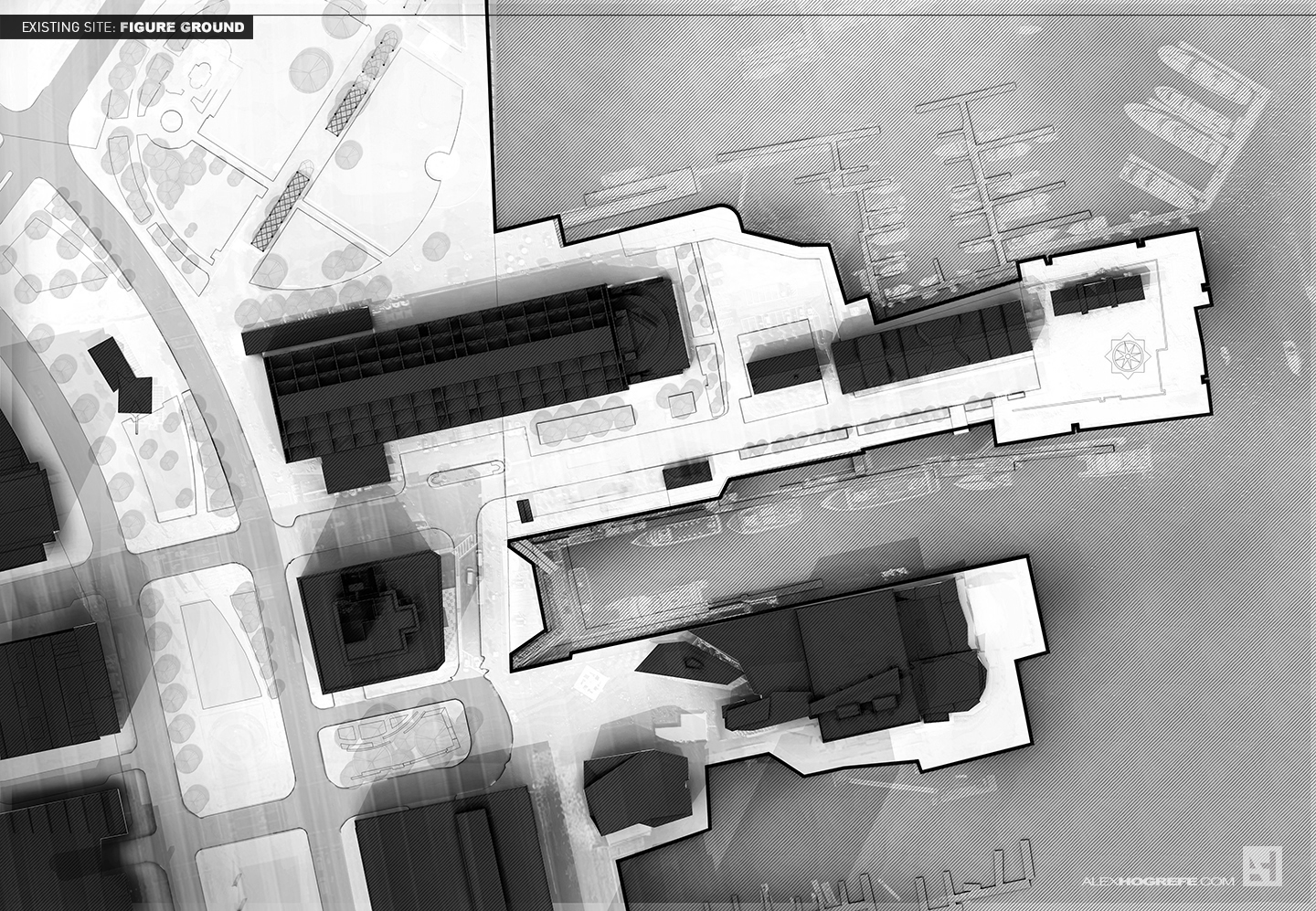 The architecture of hospitals and pharmacies has a number of important nuances that are available for drug storage, I take all this information on the websites of experts in this field.

The above diagrams are built on a simple base that is made up of two images: a clay model rendering and an aerial image. I like to overlay the aerial image to bring in more information, detail, and texture. However, I lower the opacity quite a bit so that the aerial image isn’t too overpowering. In this case, I desaturated the aerial image and will bring in the color later. 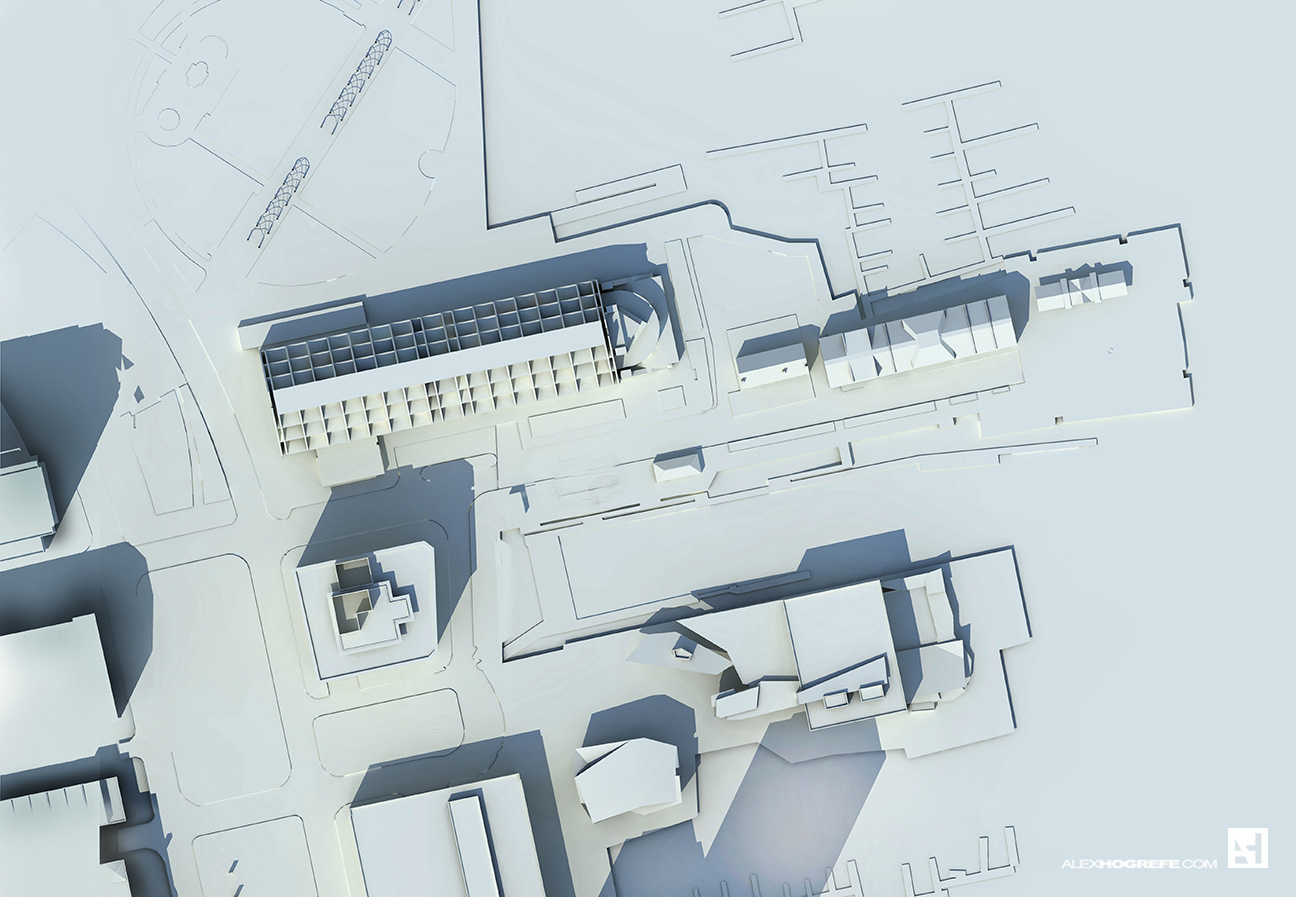 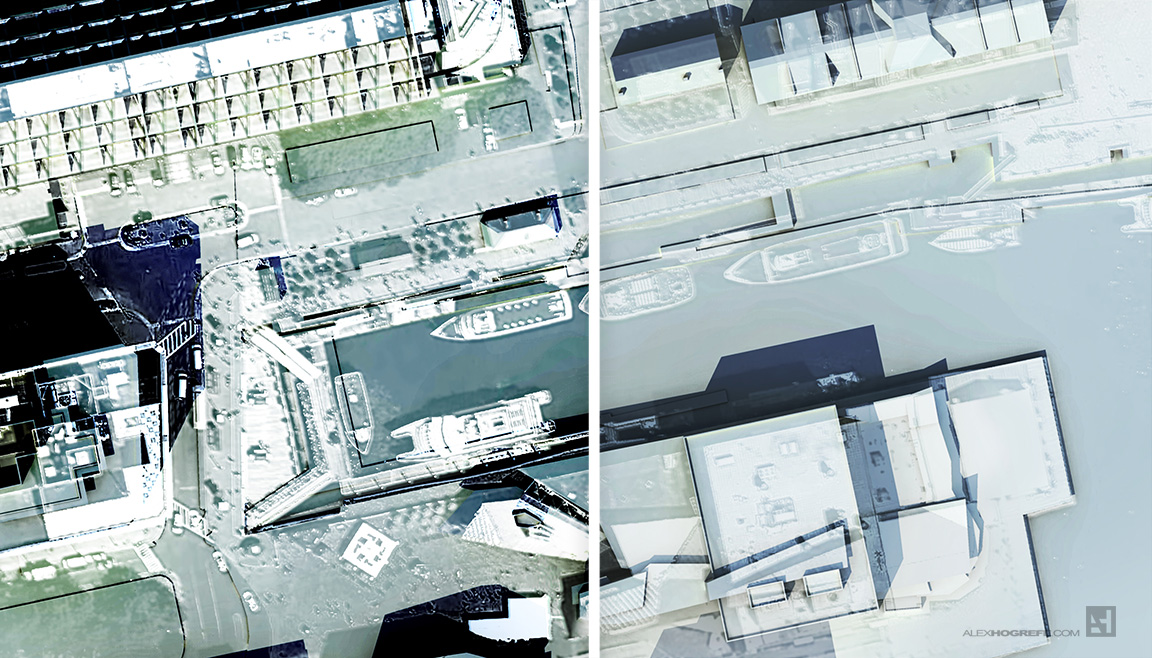 Above, the clay model rendering with the aerial image overlayed. I then lowered the opacity of the overlayed image to about 35%.

With the base image setup, I then began applying color on top of the base image to punch up certain aspects of the illustration such as buildings, roads, and water. Each color overlay is on its own layer (such as the roads on one layer, buildings on another, etc) so that I can individually control the color and opacity. 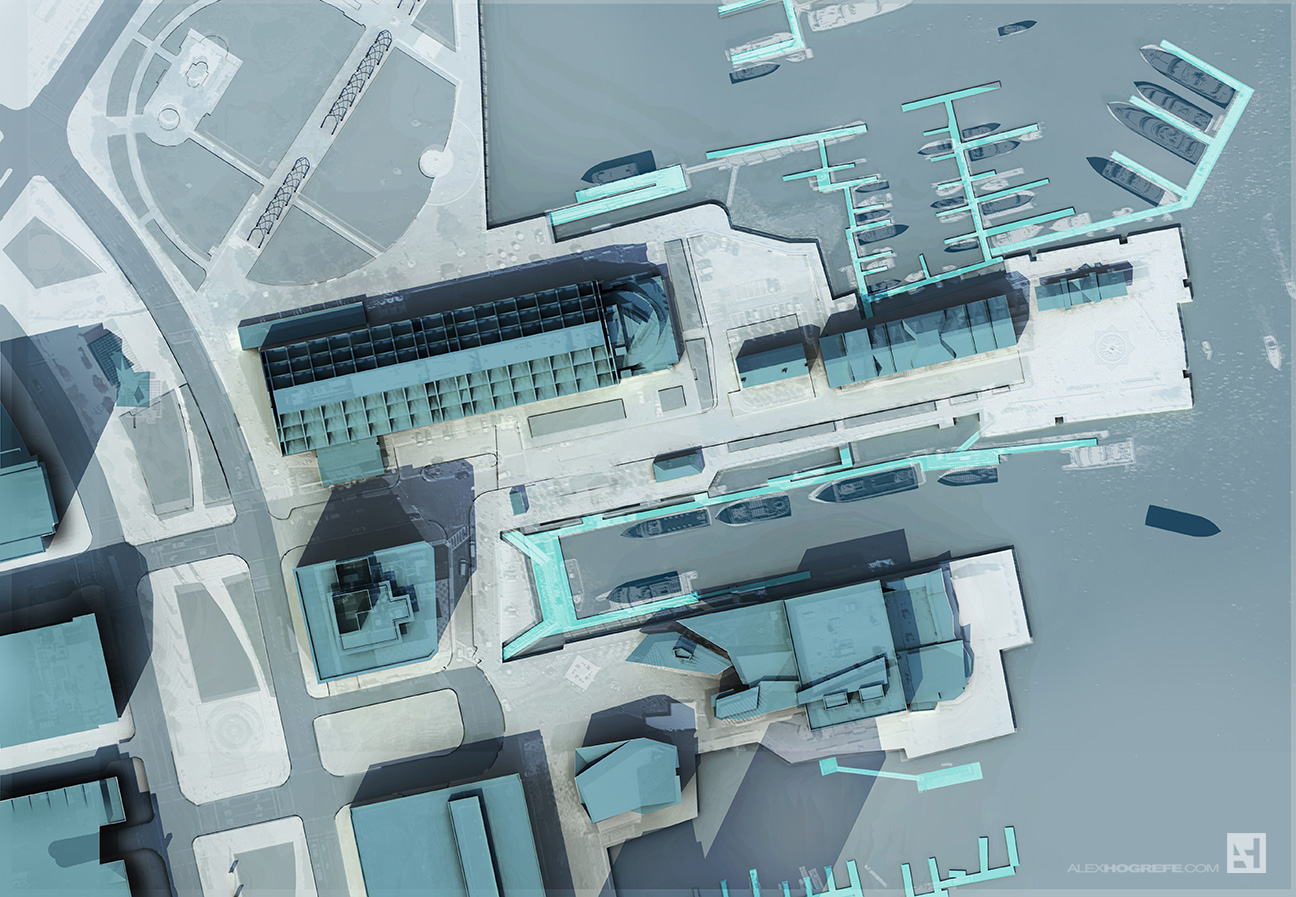 The edge of the wharf and buildings need to be better defined, so I applied a “stroke” to the colored layers. This is where having the layers separated out worked to my advantage. For example, I chose the layer that contained the blue color overlay for all of the buildings. I went to “Layer>Layer Style>Stroke” and gave a stroke width of 4 pixels. This placed a black outline around that layer and therefore around each building. I also applied a stroke to the edge of the water, docks, and boats to help define those elements as well. You may also notice that I added a diagonal line hatch to the water and buildings. This was a texture I found online and applied as an layer overlay. 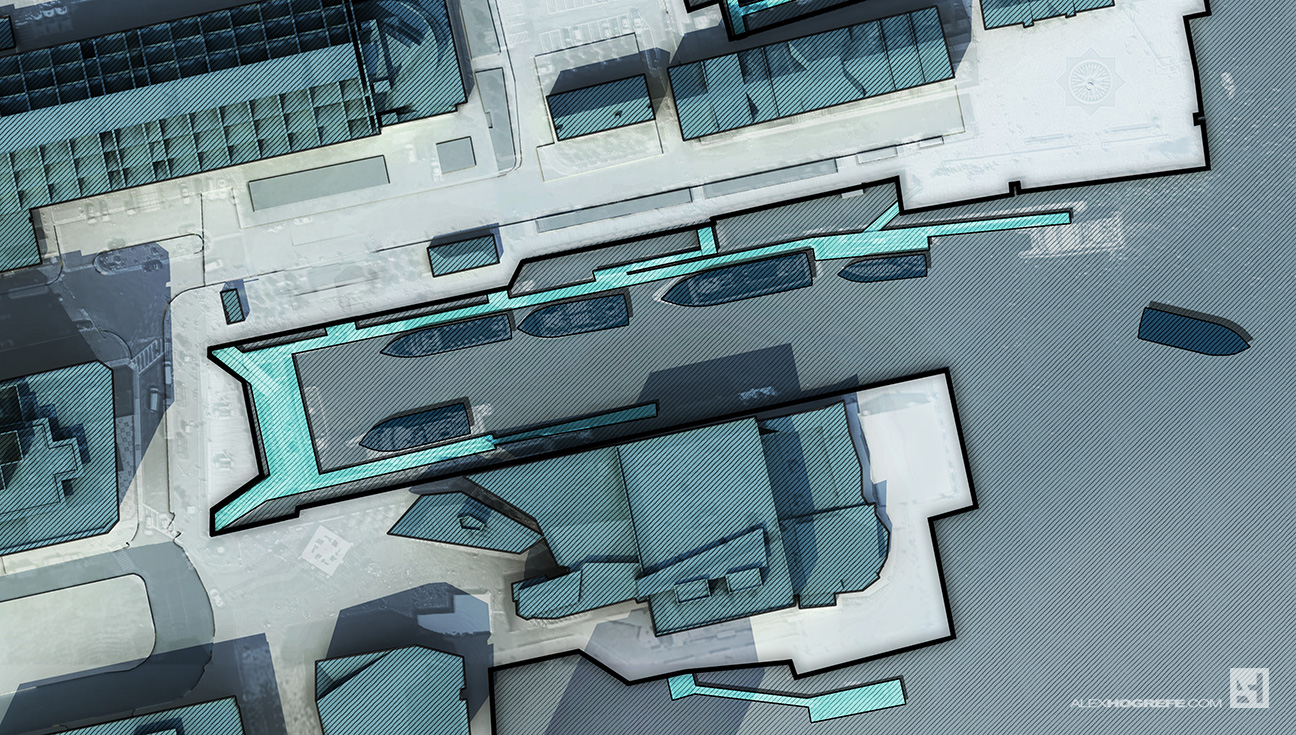 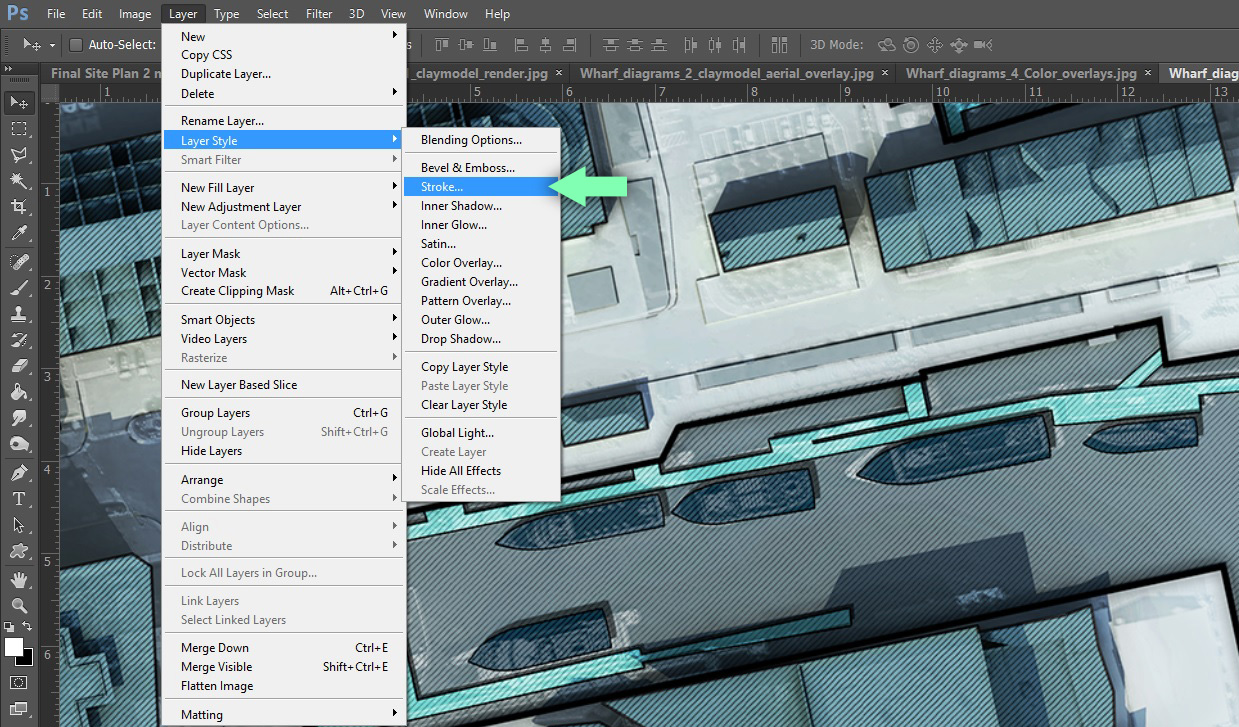 From here, I began adding guidelines, trees, and other elements for diagramming. 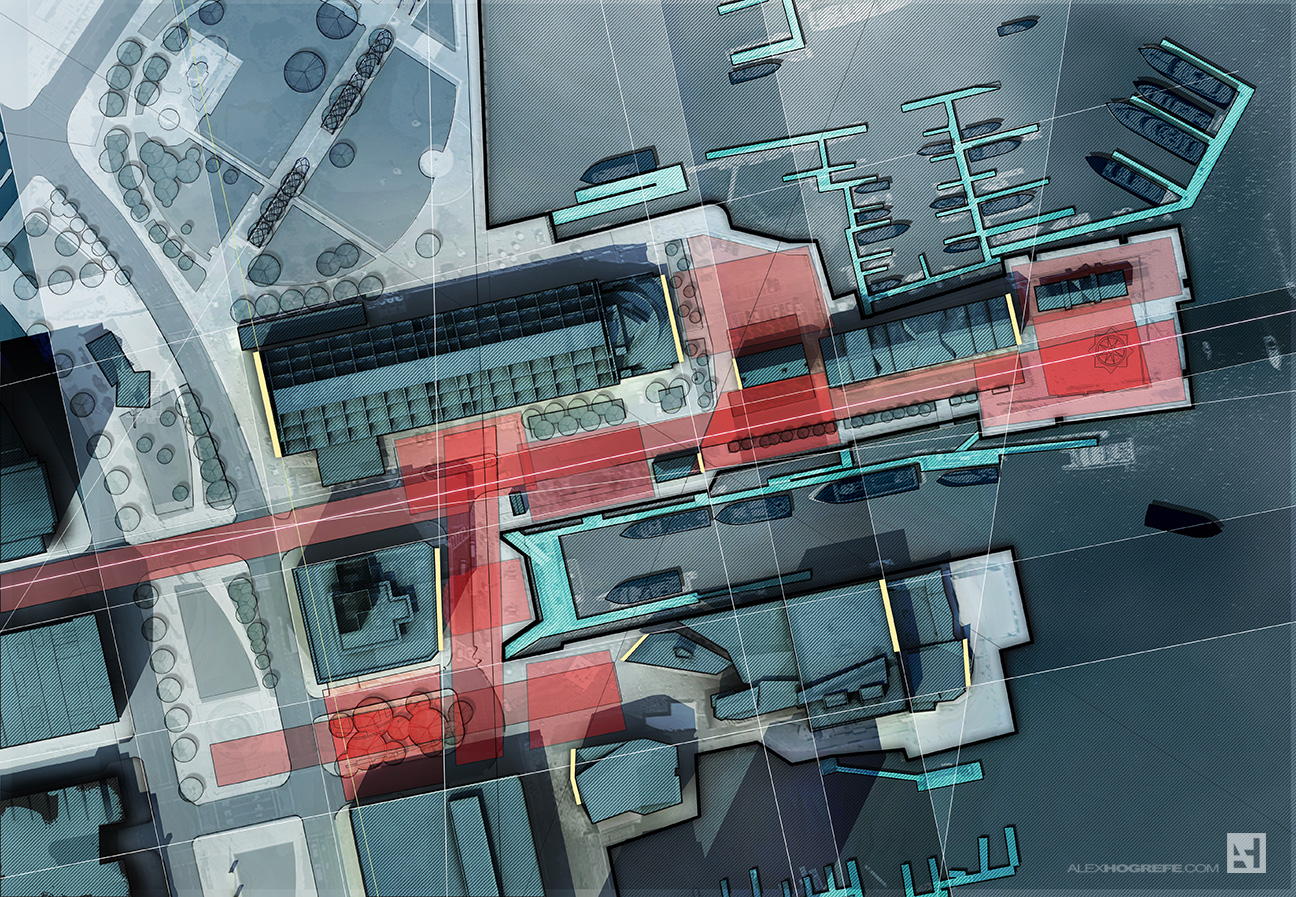 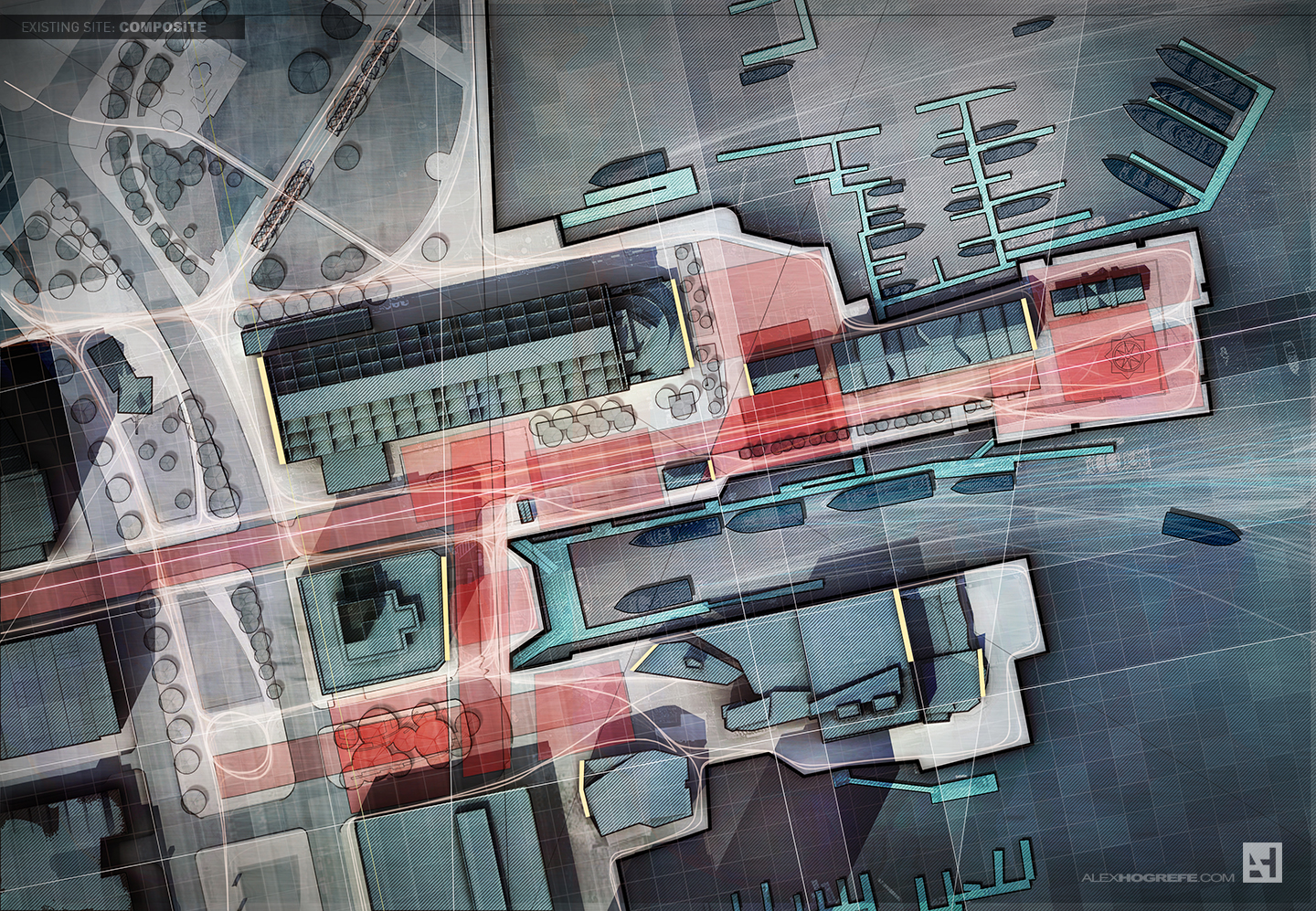 I skimmed over many of the details of this illustration. However, as I generate more diagrams for this project, I will narrow in on specific techniques used. For now, I am still experimenting and testing out ideas. More on this later.