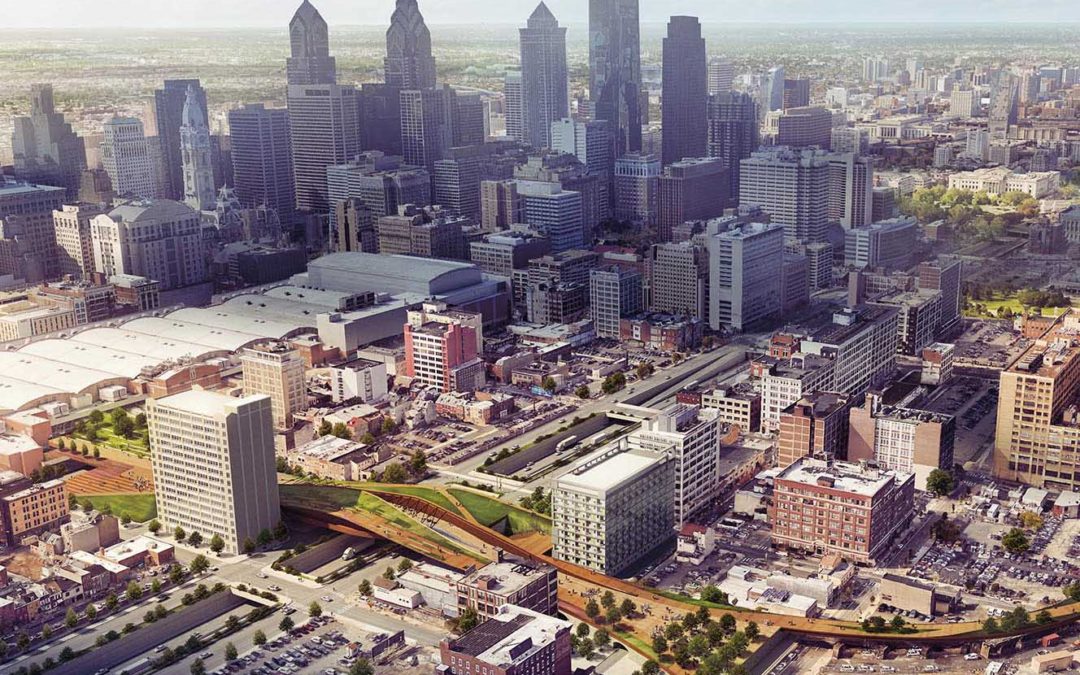 Aerial architectural renderings in a city environment are some of the toughest images to create. For one, you are dealing with a ton of texture, geometry, and complexity when it comes to the context. The ideal way to manage this is to hire a photographer to take photos with a drone at the precise view angle.  Another option is to build (or purchase) an elaborate model of the city. However for this personal project of mine, I don’t have either the time or the money for either of these options. Other difficulties with city aerials include creating proper hierarchy and focal points. With all of the texture and complexity of a city, everything is competing for attention and it can become difficult to draw the eye to the places you want it to go. Below is a break down of the Philly Bridge aerial illustration with an attempt at tackling some of these issues. 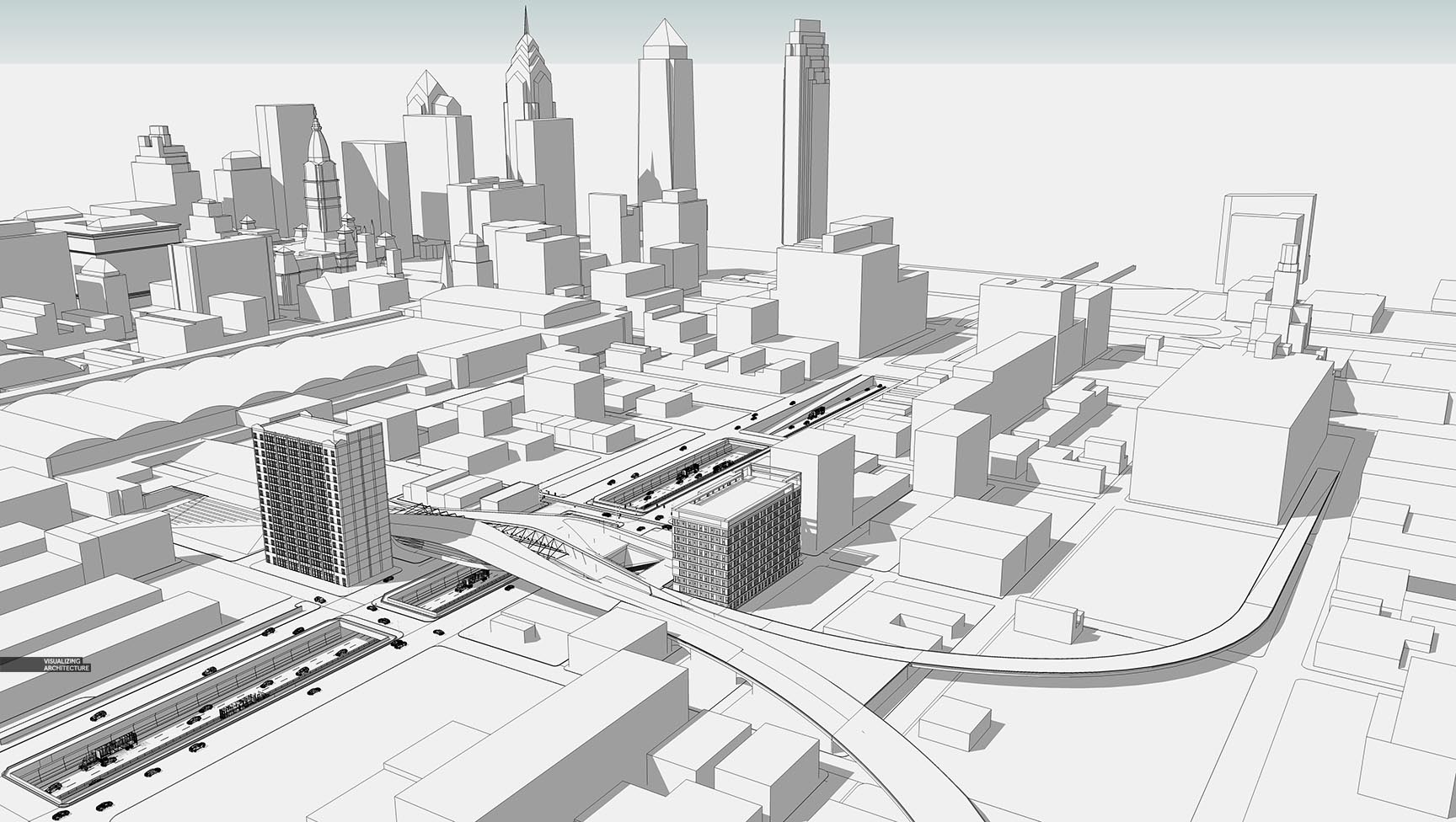 The Sketchup model had the basic massing of the city inserted so that I could properly line up the context imagery in Photoshop. Obviously, you don’t need to have the entire context and can get away with just a few buildings in the distance. However, having as much massing as possible makes it easier to setup the view and composition. Because the view is pulled so far out, not much time was needed to cleanup the bridge design area of the model. Essentially, some materials were adjusted and proxy cars dropped in. 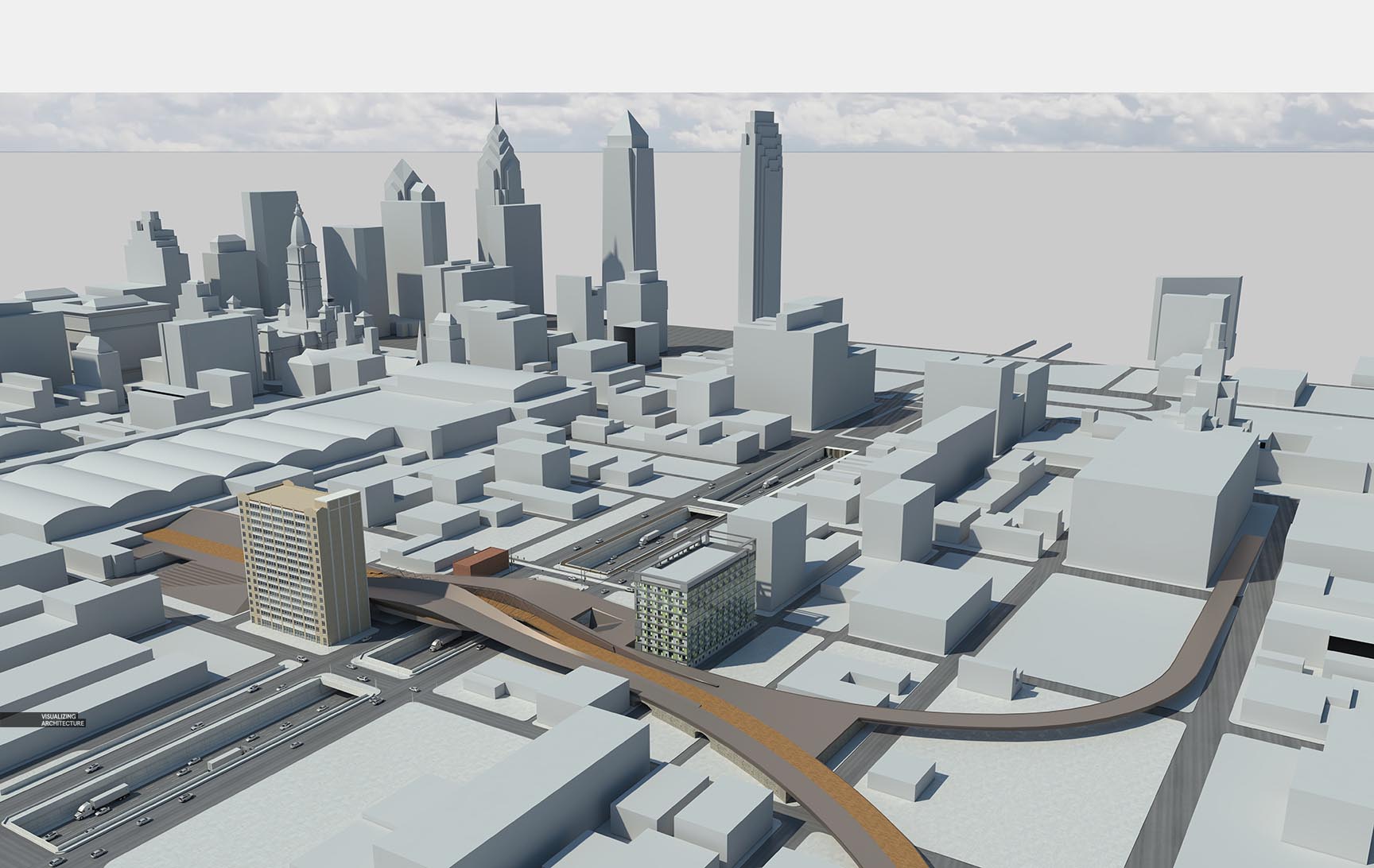 The base images were rendered in V-Ray at a slightly higher resolution than normal, 7000 px wide. People tend to zoom in closer on aerials so going with a higher resolution keeps the image looking sharp even up close. Also, the higher resolution allows for more accuracy when Photoshopping in details and creating masks. 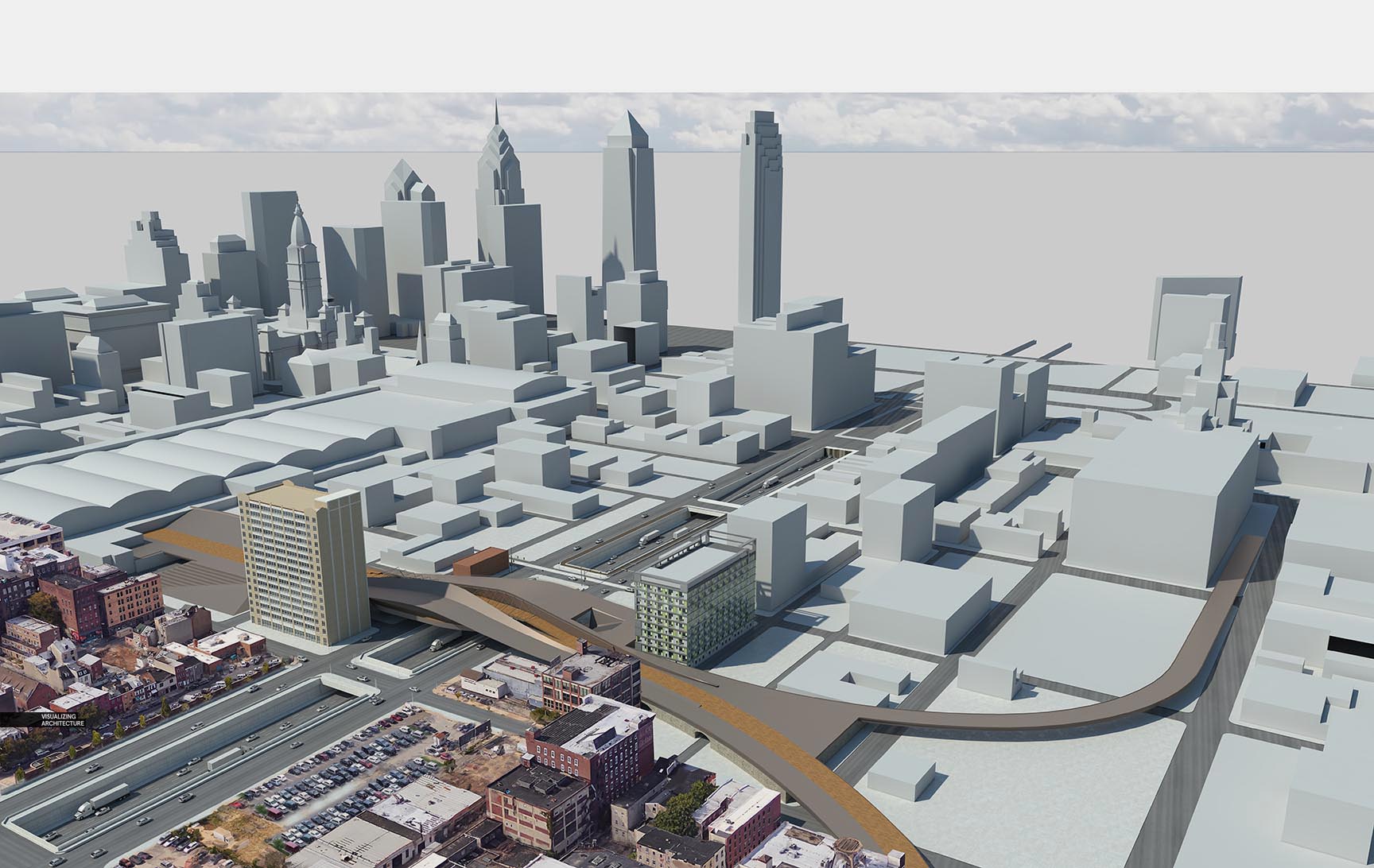 Like I mentioned at the beginning, I don’t have any aerial photography or detailed models of the city at this exact view angle. Therefore I looked to one of the many free mapping websites for help. Most of these websites provide 3D navigation where really any angle is available of the city. The problem is the quality and resolution of these images is so low. The 3D imagery is generated from the aerial photography itself, so some cities are better quality than others. While the quality isn’t great, I still prefer this over the coldness of grey massing with half the city missing.

For this image, I patched in the imagery into three groups: foreground, mid-ground, and background. This gives me a little more control when matching the context images to the 3D model, but also for masking in atmosphere and effects later on. 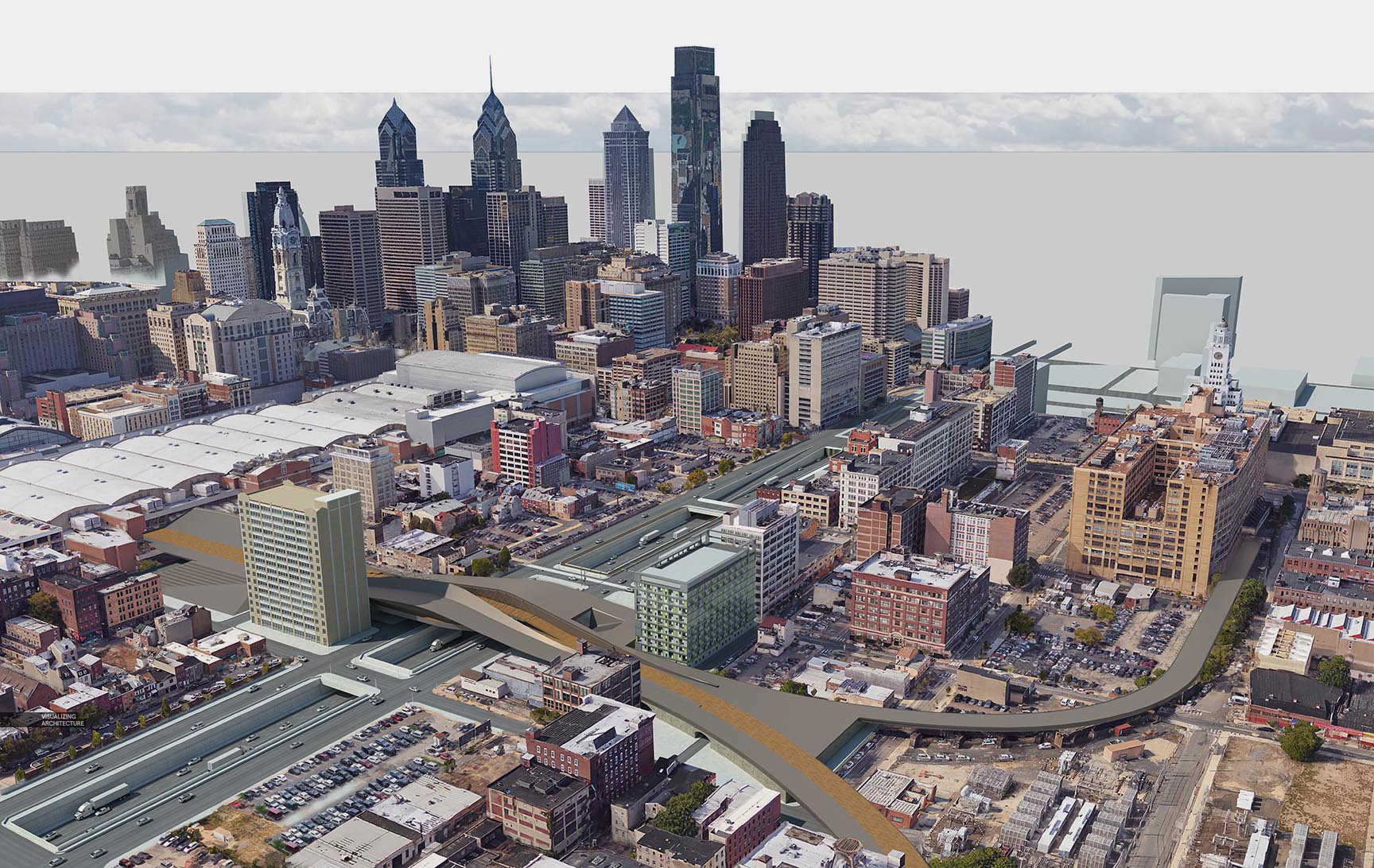 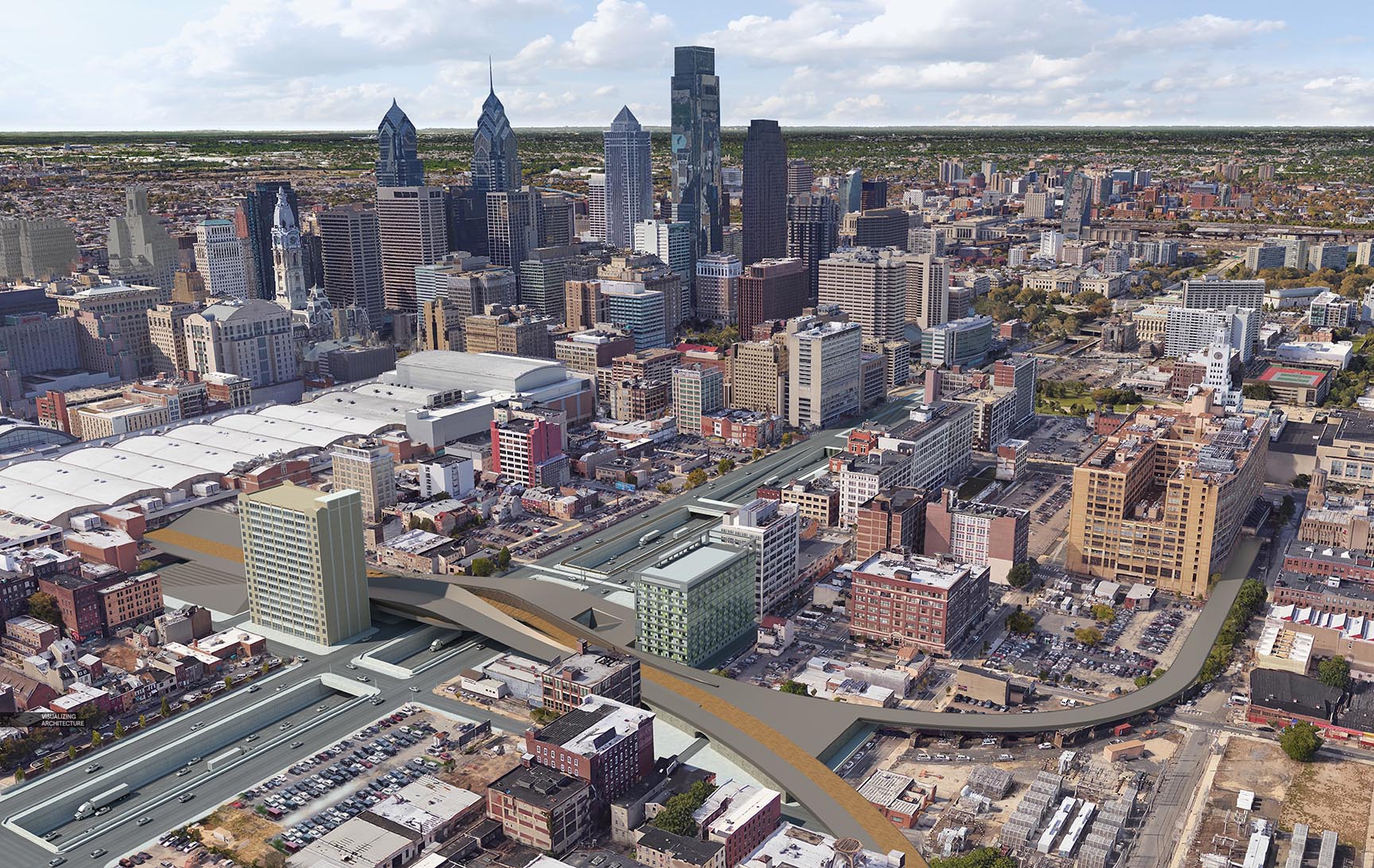 It is important to ensure shadows match up when combing 3D with context imagery like this. The combination of high res 3D with low quality context imagery is already harsh enough, but not matching shadows just makes it that much harder to blend the two. 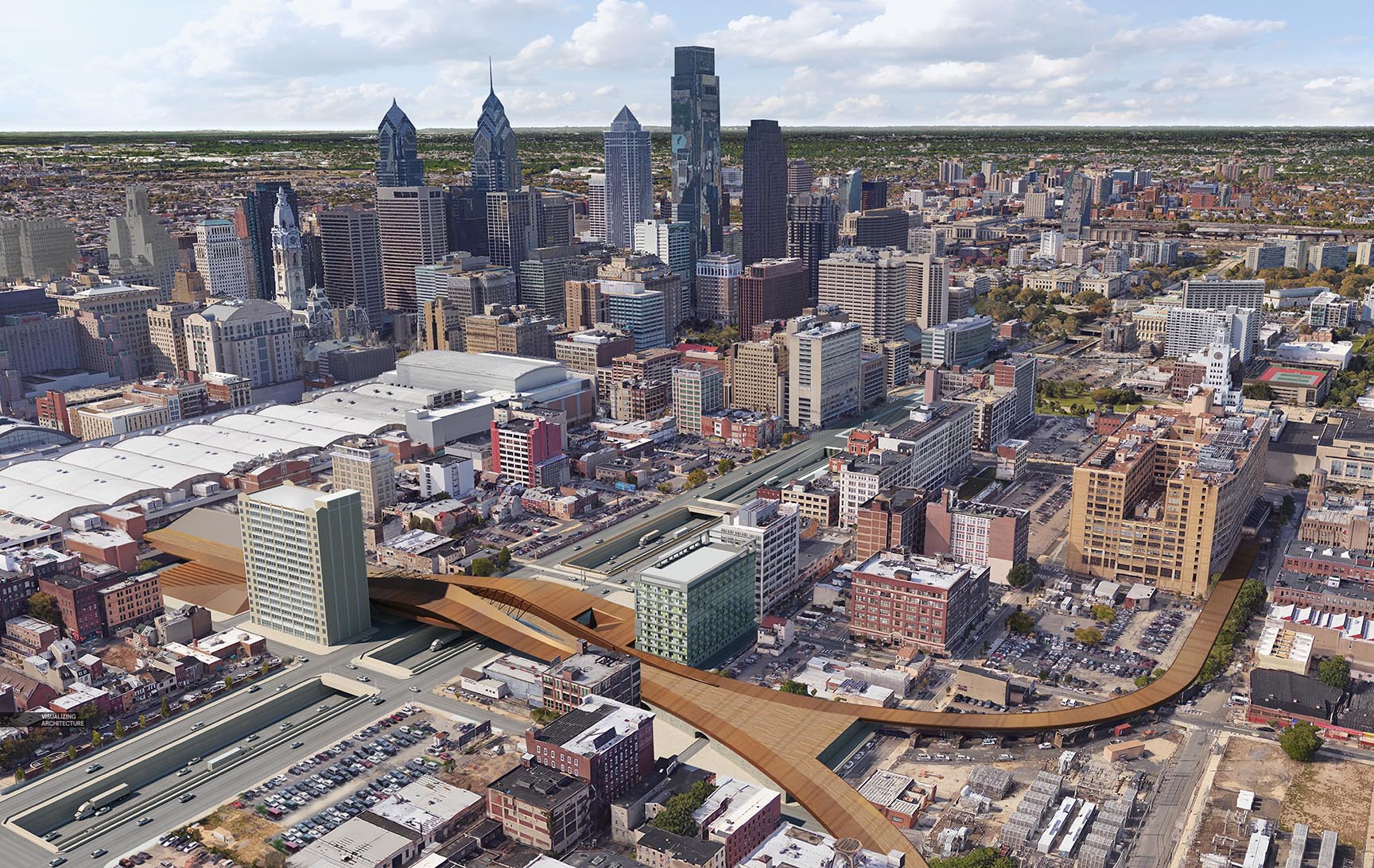 I toned parts of the 3D base rendering to better match the context that was Photoshopped in and to dial in the colors of the materials on the bridge. 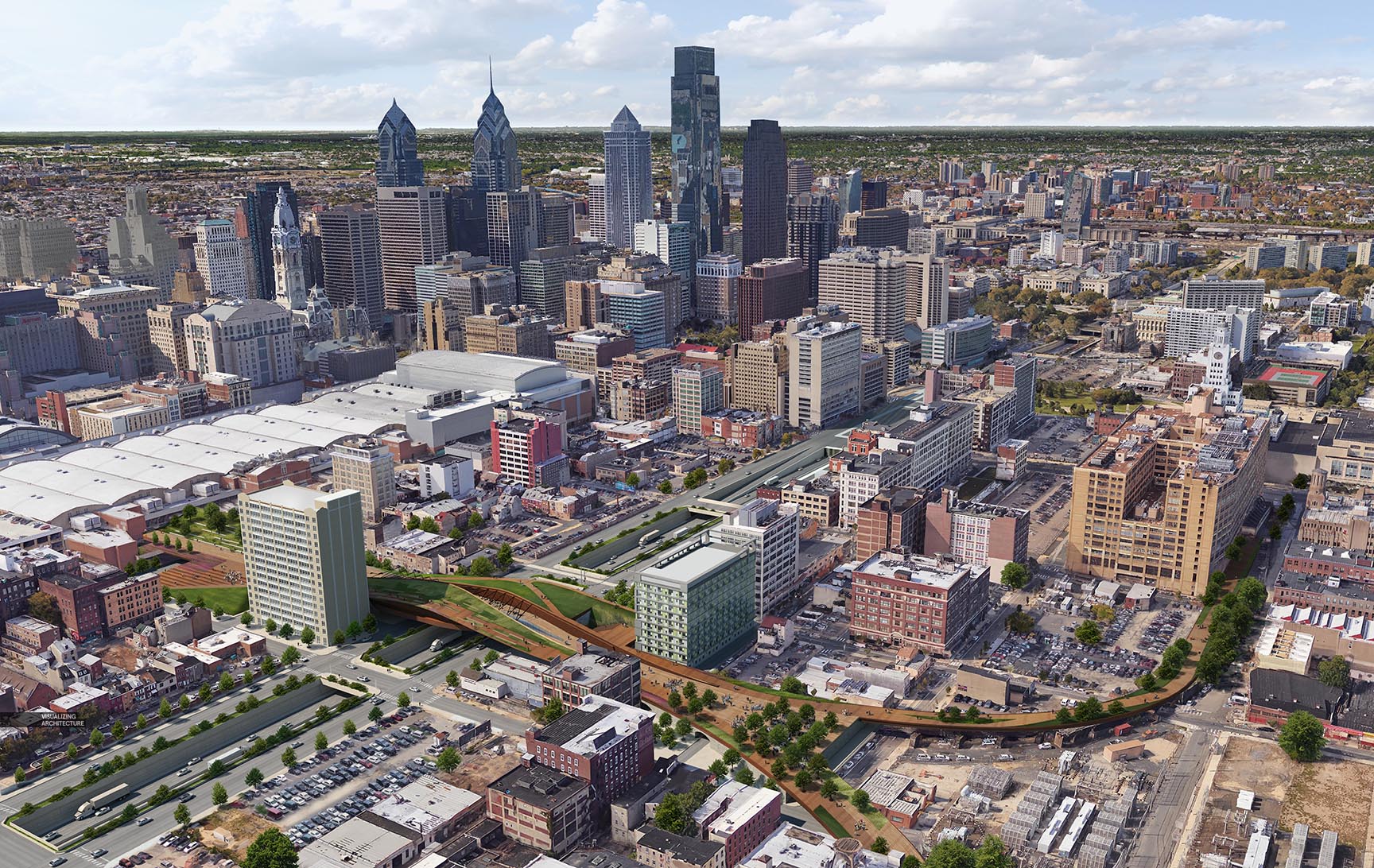 Next came people and entourage. The people are so small that they are essentially acting as another layer of texture to the image. However, the vegetation was a way to draw attention to the project. I played up the strong green tones to connect the different parts of the design and to contrast the intense texture of the city context. All trees were added in Photoshop vs baking them into 3D because I wasn’t quite set on the design and layout of them. 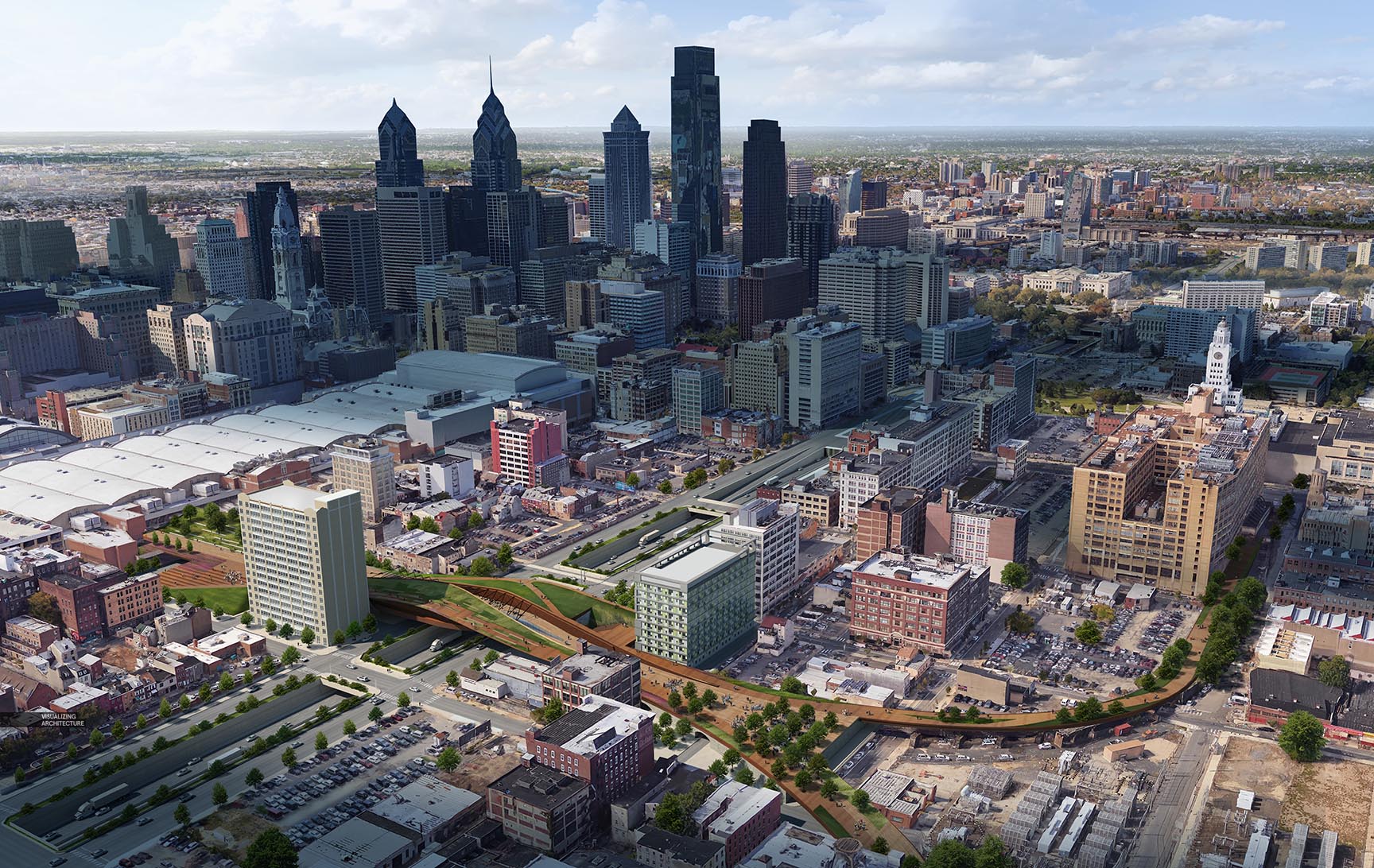 One way to insert hierarchy in the composition is to play with shadows. In this case, shadows created by clouds. I, therefore, placed the skyline in shadow, shifting the viewer’s attention to the bridge design in the foreground. By dividing the context imagery into the different groups earlier, I was able to quickly select the skyline to put into shadow while keeping the distant context in light. The cloud shadows were created by simply brushing in a dark blue paint and setting the blend mode to multiply. 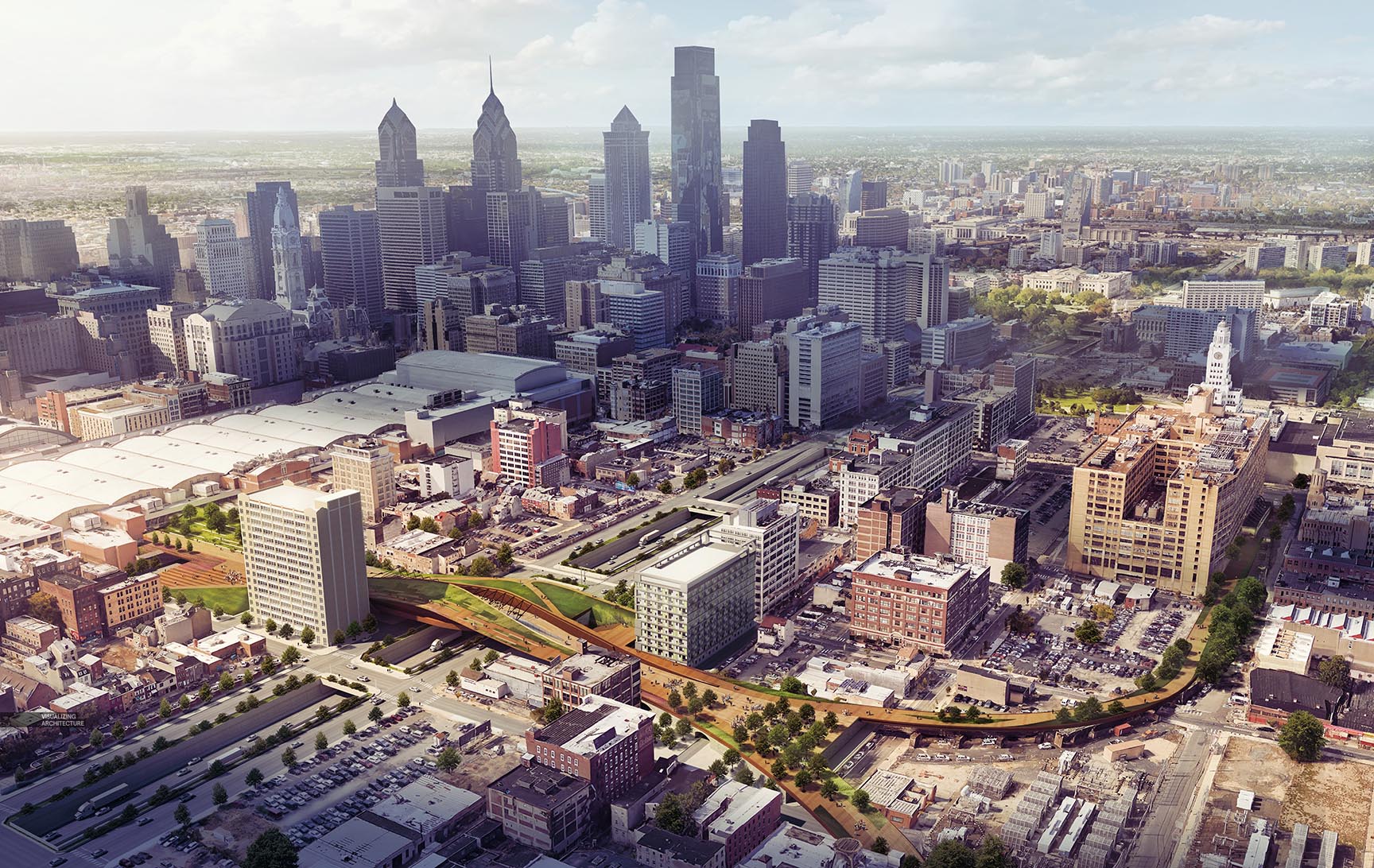 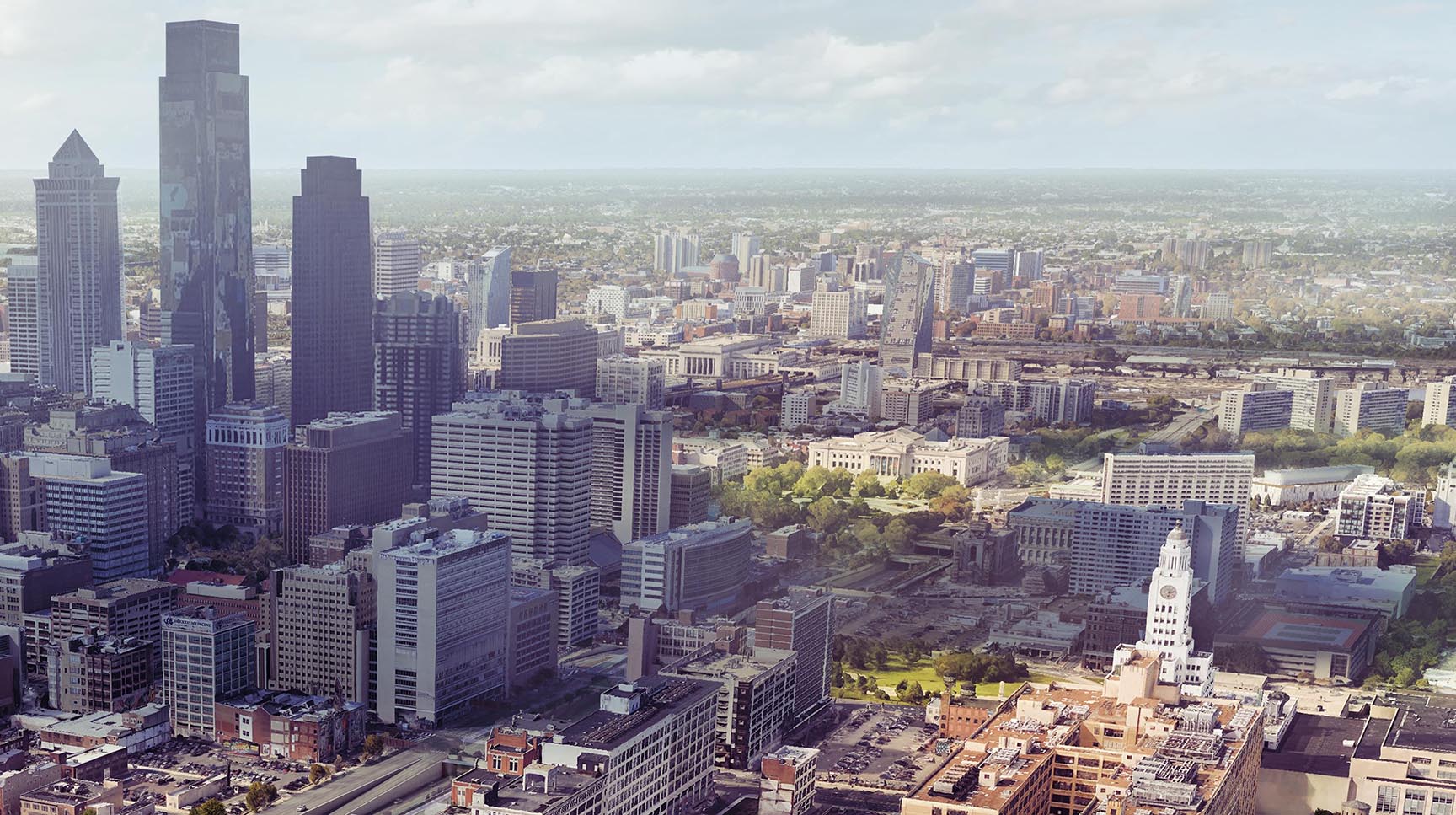 Finally, I tweaked the tones using the Topaz plugin, and punched up points of interest with bright color overlays such as around the bridge and green space throughout the image.

While drone photos or even detailed city models are ideal, a decent aerial illustration can still be achieved without these elements through a mixture of online maps, patience, and some Photoshop magic. Now that I have this aerial out of the way, it is time to take a break from all of these perspectives and get back to some diagrams or possibly a new project. Stay tuned!