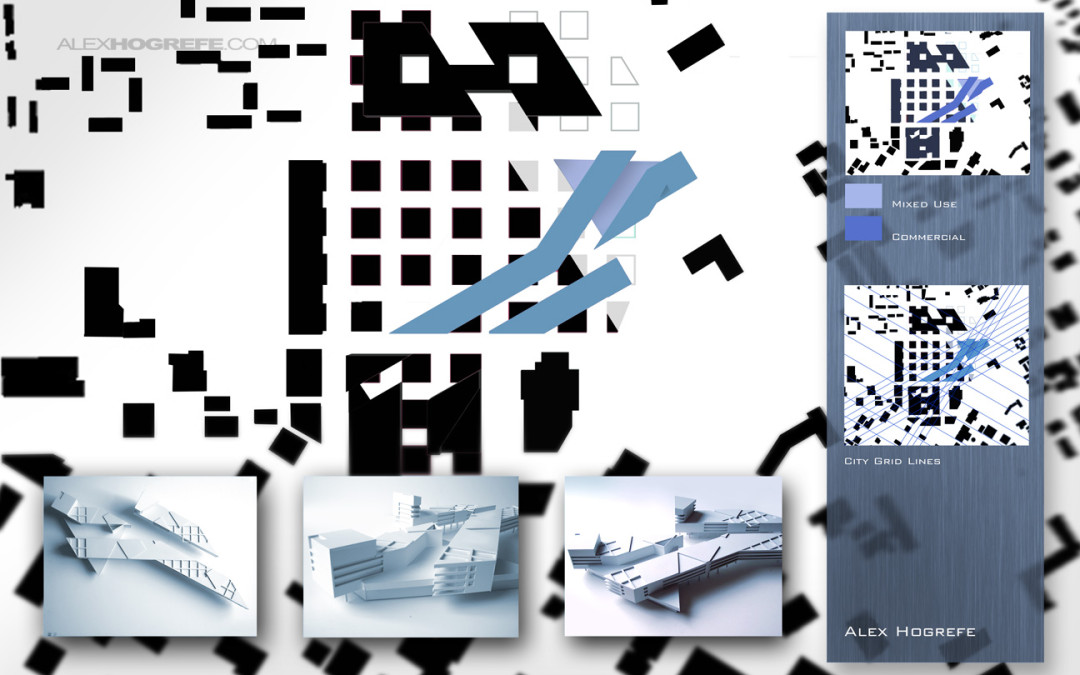 Presentation boards are something I haven’t really talked about on this site and they seem like a good thing to transition into. I was looking through some of my old boards and couldn’t stop noticing really stupid mistakes that I kept making.

The below presentation was created in 2006, my junior year in undergrad. The design was an urban planning project and we were presenting our massing studies of an area in downtown Toledo, OH. At the time, I had only been using Photoshop for about a year, and this was probably the 3rd project that I had used Photoshop to create my boards with instead of drawing them by hand. With that said, I will use these boards to begin explaining what not to do. 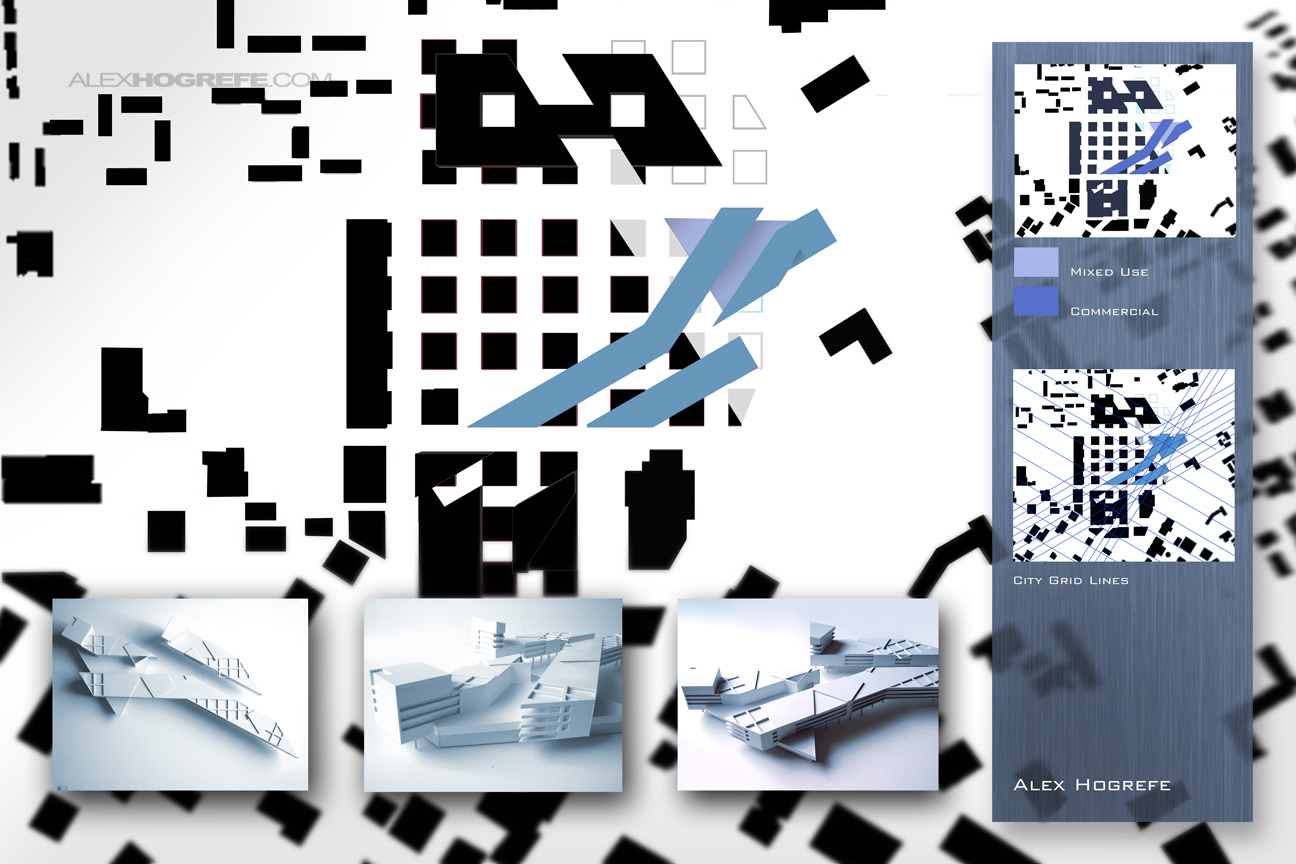 The first thing that really grinds my gears is that there are hardly any labels or explanations. For some reason, I felt it wasn’t necessary to write much. This is crucial because you won’t always be standing next to your boards to defend the design. Having short explanations give viewers a quick introduction into what you were thinking. It also allows the jurors to understand the parts of the project they are interested in while they are pretending to listen to you talk. I typically like to have a 3 to 4 sentence paragraph on the introduction board summarizing the overall concept and giving viewers a place to start. This board, however, has nothing.

While the large figure ground covering most of the sheet is an important diagram, it should not be the focus of the board. It might have helped to overlay an aerial image or combine multiple diagrams with the figure ground to amp up the message I was trying to get across. In this case, it seems I was more concerned about the composition of the board rather than the information I was trying to convey.

The second board isn’t much better. Again, not much information explaining the images. My biggest beef with this board is the waste of space in the gray box on the right side. The images in the box graphically aren’t saying anything. This would be the perfect place for more diagrams or text explanations.

The image at the top left of the board should be removed. It is covering up part of the elevations and is representing a view that already appeared on the first board with the physical models, and will appear again in the next board.

The elevations read extremely flat. I remember spending a lot of time designing the project sectionally, yet I don’t have any drawings showing a section slice through the site. The sections would have provided a much better understanding of the forms and scale of the spaces compared to the elevations that just come off as confusing and hard to read. 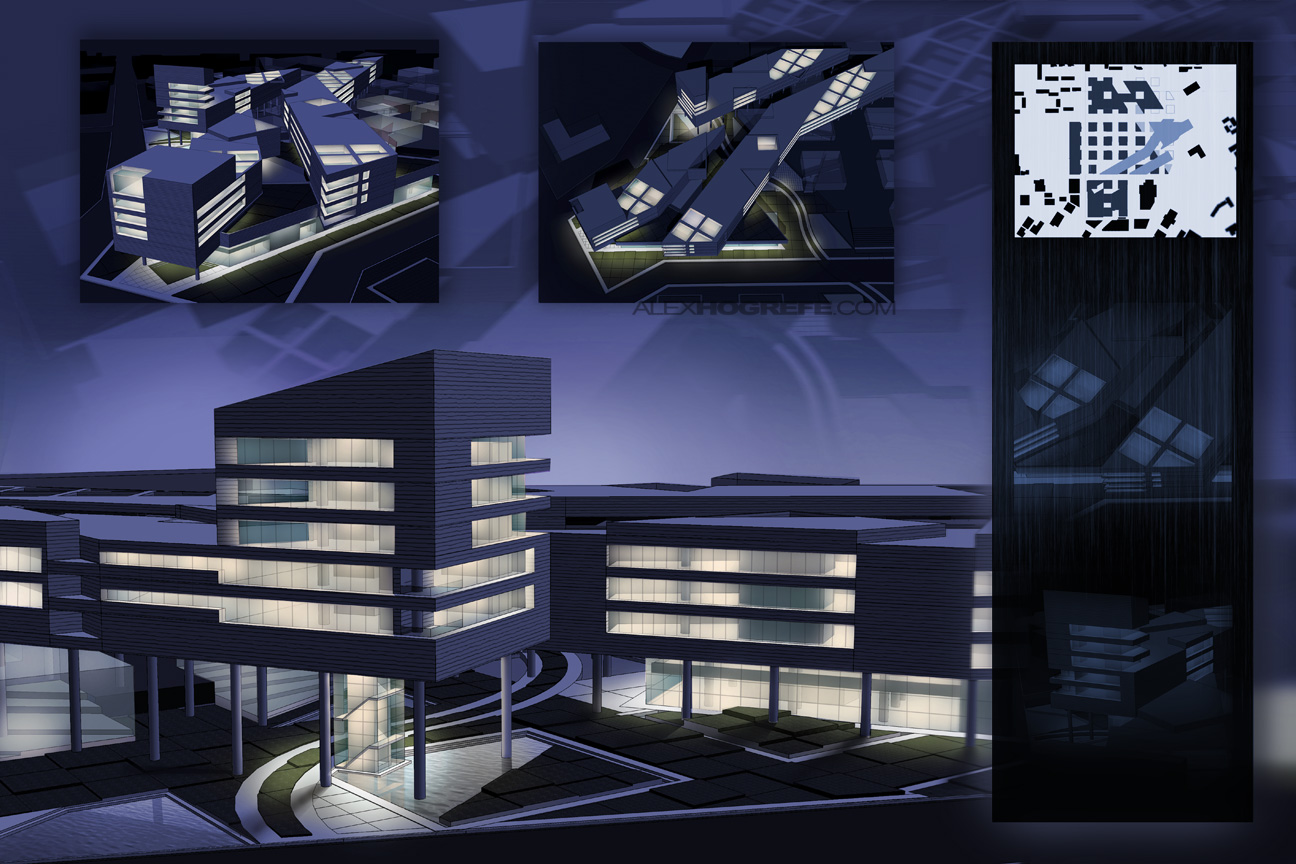 I remember getting really excited with how these night illustrations turned out. This was the first time I tried this technique, and it had come together better than I was expecting (See the tutorial on how to create these illustrations HERE). The big problem though is that all the rendered images are at bird’s eye view.  Nothing is at eye level describing the experience of actually walking through the site. My thinking at the time was that I thought I could explain the building better with these types of views. But with this approach, I am essentially explaining the design as a sculpture and not as an inhabitable structure. I also show no people in or around the site, making everything feel lifeless. Adding people would have made a big difference in the atmosphere of these illustrations.

The repetition of views in these three boards are horrible. The pics I chose of the physical model are almost identical with the rendered views. While it seems obvious now, at the time, I didn’t think twice about it.

While it is easy to look back at past presentations and pick them apart, it has also made me aware of the decisions I tend to make when I’m under a time crunch and has allowed me to work more efficiently the next time around. This is just one project of many so expect to see more critiques later on.