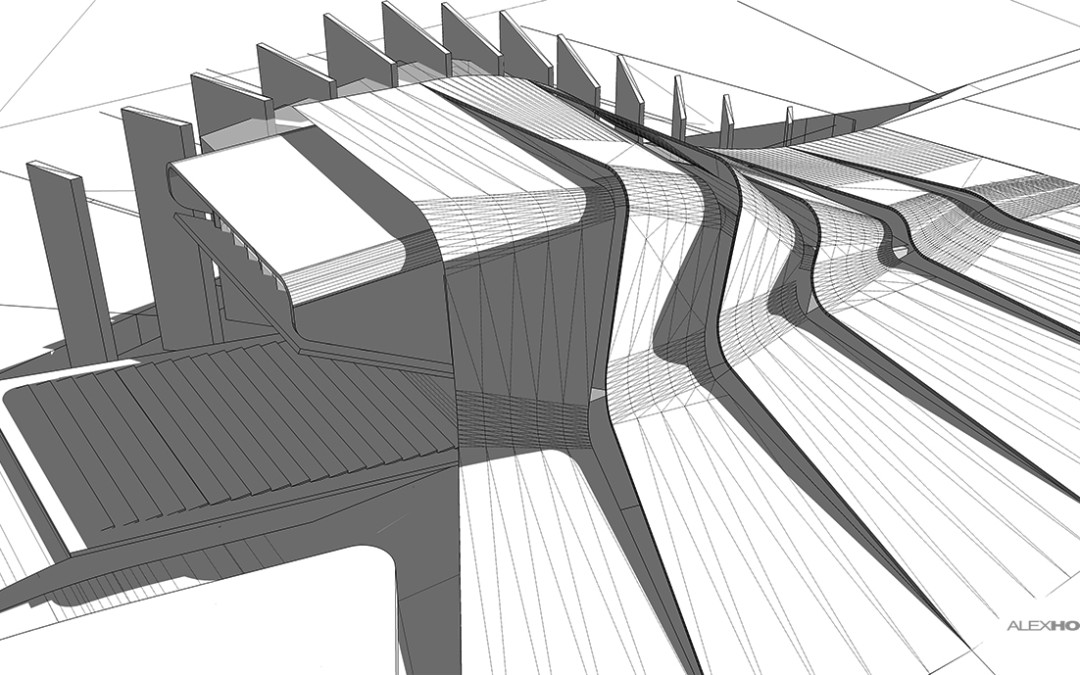 I received a lot of comments asking for an explanation of how I made the model and more specifically the curved geometry. Sketchup by itself is not well suited for “organic” modeling. You need the right plugins to get the “rhino-esk” functionality. What I have done in this model is not considered complex however anything more intricate probably should not be modeled in Sketchup. Software like Rhino is better suited simply because these programs use NURBS based modeling instead of mesh which allows for more editability and handeling of complex geometry. In the case of my model below, I can start to bridge the gap between Sketchup and programs like Rhino by using free plugins.

Before I get into what plugins I used, I wanted to talk about the process. One of my biggest pet peeves is when people design based on the limitations of software. I’ll admit that I prefer to model in Sketchup. However, I am not going to change my design based on what I know I can model in Sketchup. Before I started modeling, I evaluated my design based on sketches and massing. I came to the conclusion that I could accomplish what I wanted in Sketchup without going into Rhino. The two programs work well with one another so it would not have been a daunting task to model back and forth between the two. At the same time, I like the simplicity of working in one software vs. going back and forth between multiple programs.

In Sketchup, curves take a little longer to model and therefore it is tougher to test out many iterations and ideas. Instead, I worked out details and form through sketching and massing. Above, I’ve shown some of the sketches produced when designing the new form. Each sketch is looking at a particular situation and making tweaks on the form. Something that takes seconds to sketch could take hours to model. Below is one of the massing models used to explore basic forms and ideas. I used a plan and section which gave me basic volume information from which I could develop my massing.

You may notice that there are certain elements that can be seen in the final model, but nothing is fully resolved. I was focusing on where and how the building cast shadows, how to form the land around the building, and how the form would reinforce my concept and performance, among other things.

Once I had a good base going, I began modeling the curves and softening the transitions. I have tested out many plugins and the problem I come across with most of them is how unstable they are. If they were not used just right or used inside of a group, they would crash my model. The series of plugins that I have found to work best are the FREDO Tools and more specifically the Curviloft plugin. You need to install 2 ruby scripts, the LibFredo6 found here, and the Curviloft found here. You will also need to log into Sketchucation (Free) to download the plugins.

For this model, I really only used the “loft by spline”, however I have often used the “loft along path” and “skinning” in past models. I started the process by (1) taking line work off of my base massing model, (2) using the Arc tool to soften the corners, (3) leaving me with smooth line work to loft.

Once I had a series of lines ready to loft, I started the Curviloft plugin. The process is really straight forward. (4) I choose the first spline curve, (5) then I choose the second spline curve, (6) and then hit the check mark twice to complete the process. The plugin creates a smooth surface between the two spline curves, allowing you to choose how many times to subdivide the surface among other options. The best part is that the plugin is really stable and can be used inside of groups.

I only used 2 splines for most of the lofting, however, as you add more splines to a single loft, it allows for even more complex geometry, and the plugin handles it with ease.

Finally, time was spent cleaning up the edges removing any unnecessary line work. This meant hiding a lot of the line work. Below, I am showing two screen shots. One with the hidden geometry on, and the other with it off. This tells a better story of what is going on with the geometry and how well a model can be cleaned up for presentation purposes.

If you have ever used Rhino, 3DS, Maya, etc, you know that lofting is one of the most basic tools. However, it is an essential tool that is lacking in Sketchup without the plugins. I’m curious what your thoughts are on these plugins and if you have suggestions for other plugins to try. There are obviously a ton out there, so let me know which ones you use the most.