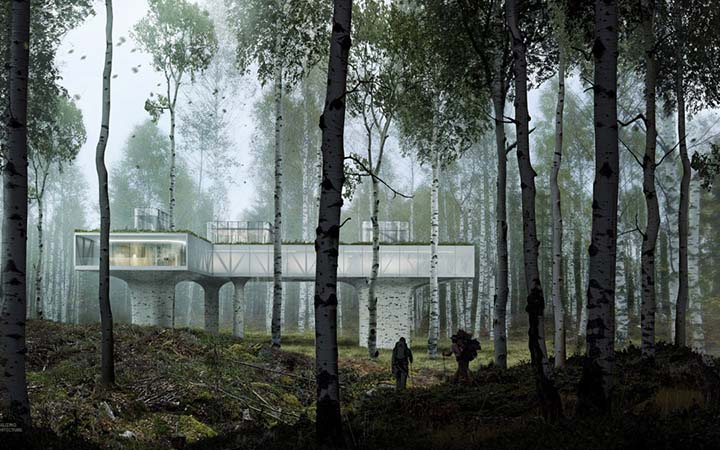 I had been going back and forth on building materials and realized that I needed to create an illustration that would allow me to visually compare options within the contextual setting. The form is more or less finalized, but I have had trouble envisioning exactly what the site looks like in my head. Therefore, this illustration is pulled out away from the architecture to capture more of the surrounding landscape and allow me to better study this relationship of architecture and landscape. I can then use this illustration as a reference as the design of the project progresses. 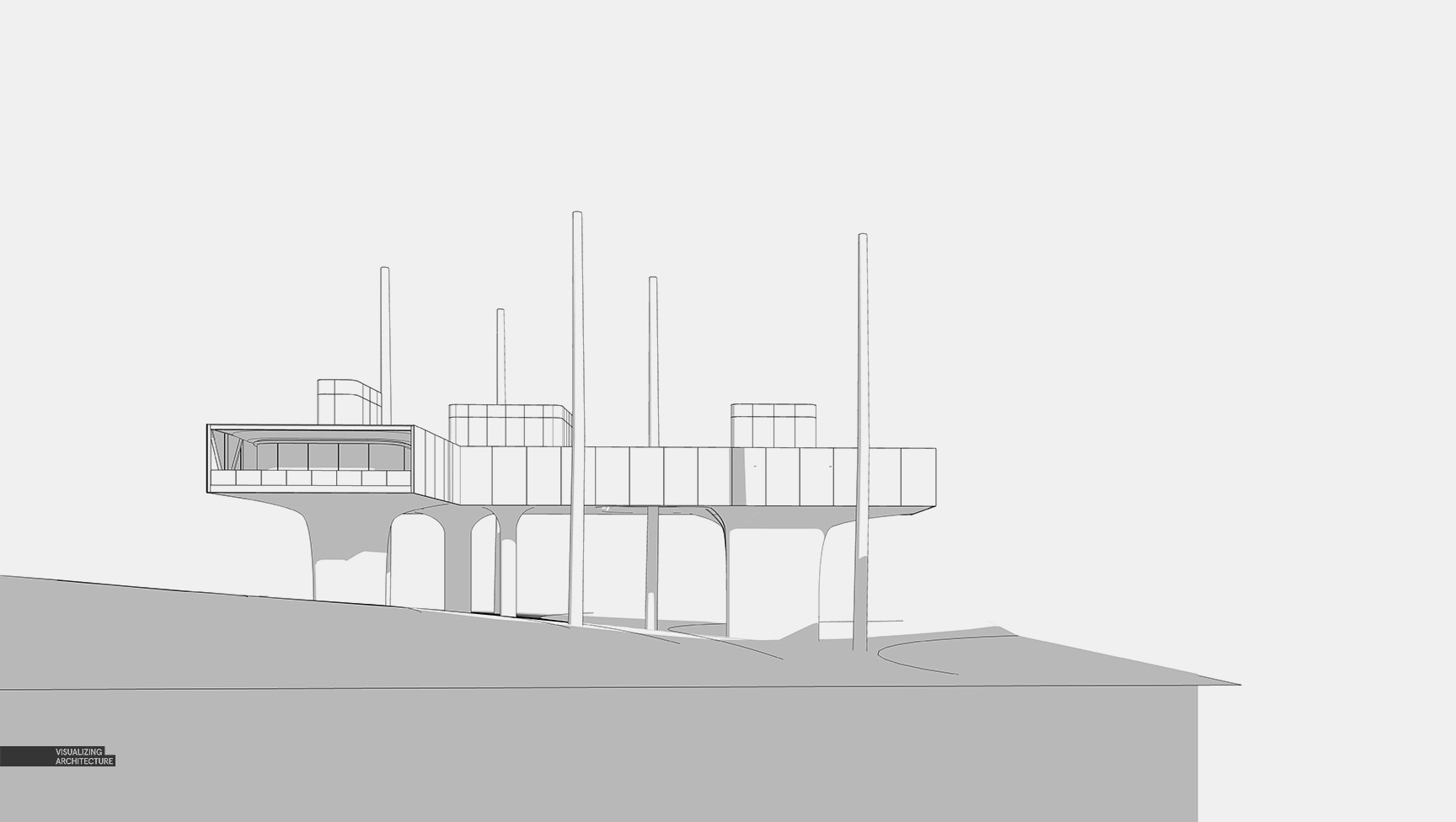 Above is the Sketchup at its current state. Like I said earlier, I still need to study material options but the form is more or less finalized. The model looks relatively simple from this far out but I have taken the time to model in better details which will be more visible in later illustrations. 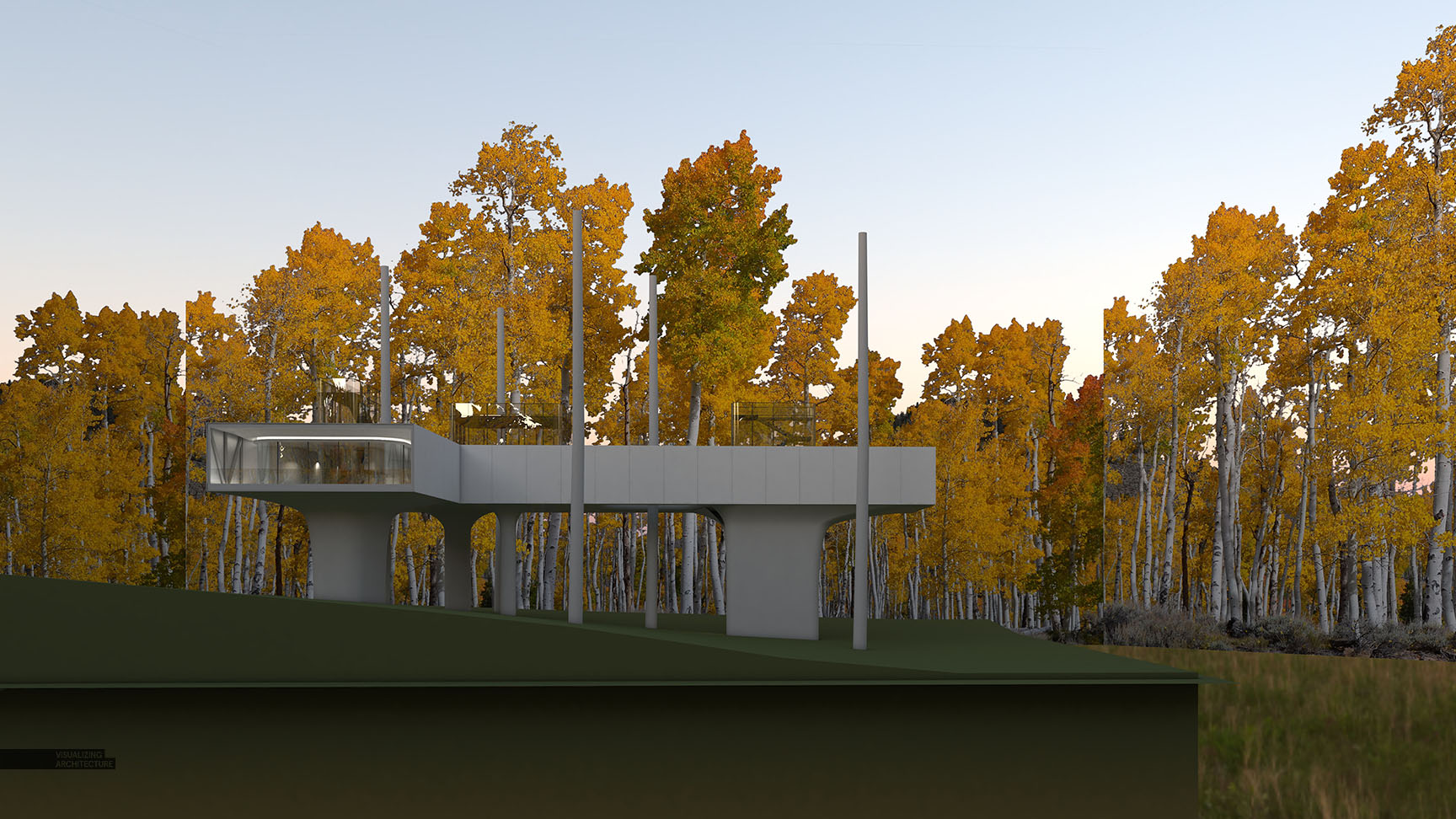 This image actually started off as a fall scene, hence the extremely yellow foliage. I ended up switching to a spring scene in Photoshop, but was able to still use the initial base renderings. I also ran a second rendering with the white side panels turned off so that I could play with the transparency of the side panels in Photoshop. 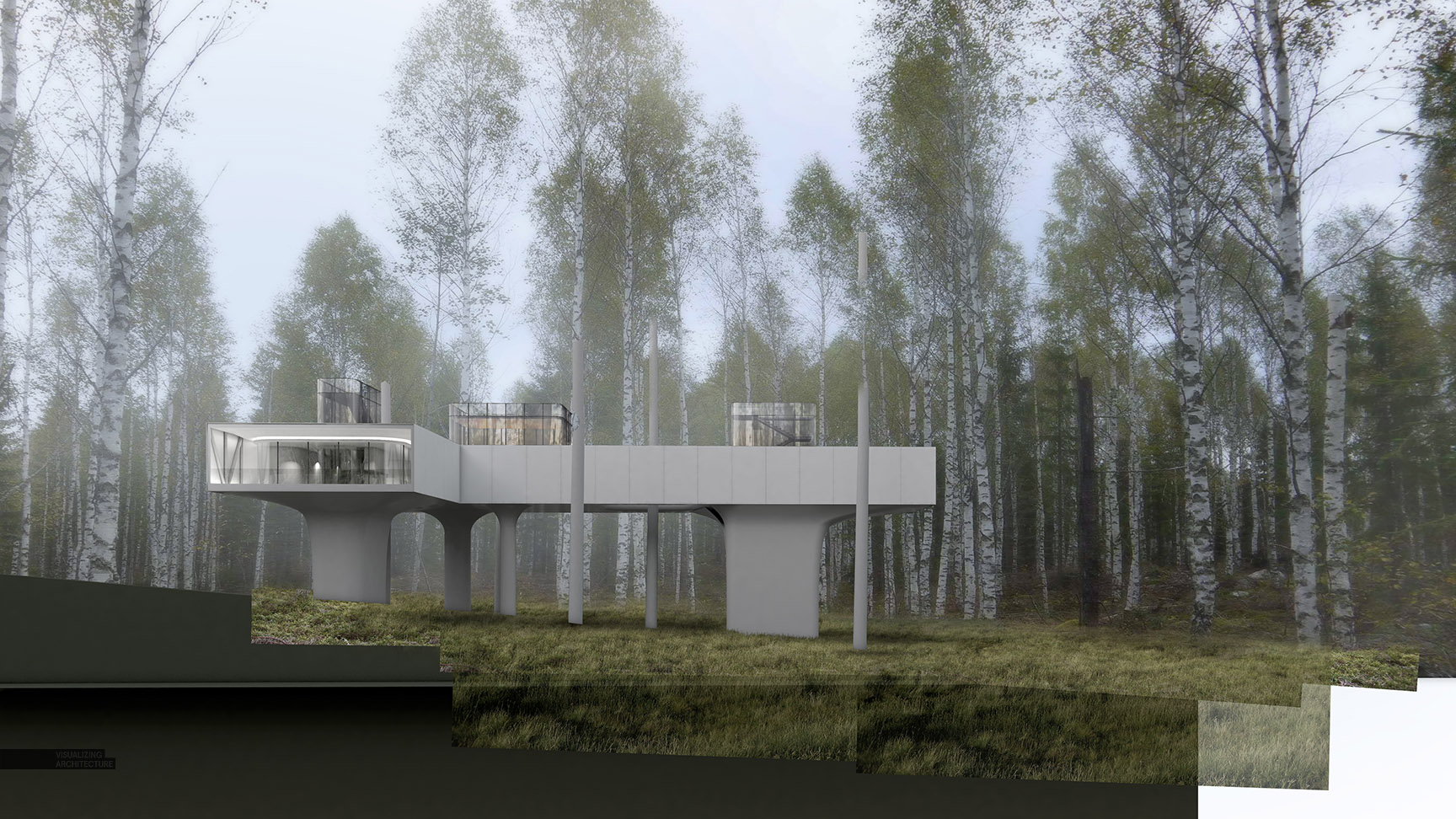 Once I removed the baked-in yellow foliage and replaced it with spring colors, the mood of the image changed completely. I tweaked the colors and lighting of both the new spring background image and the rendered architecture so that both had a slightly cooler feel and meshed better together. I also added some grass at the base of the building and spent some time blending it into the background image. 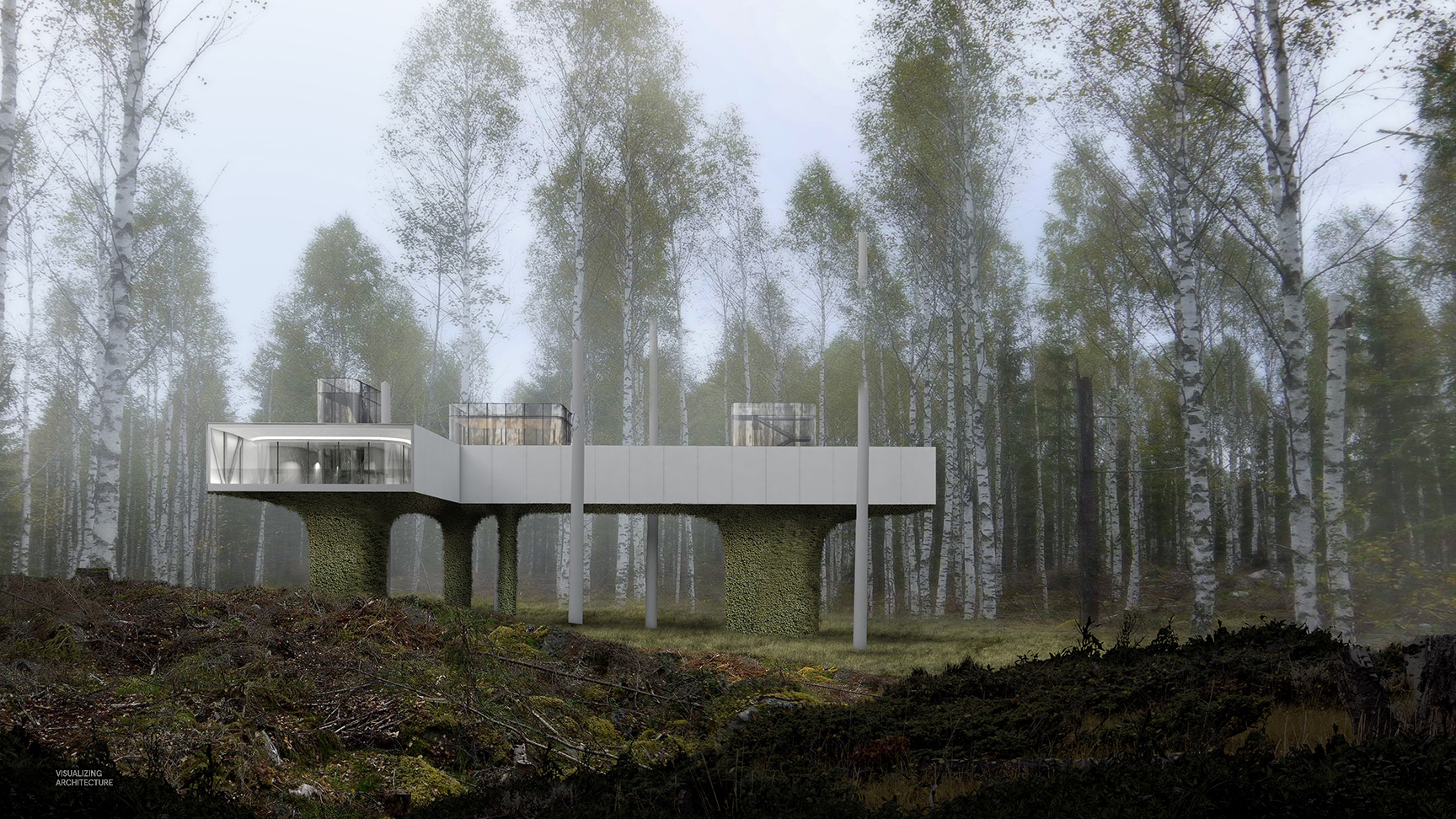 Next, I introduced the vegetation in the foreground which plays up the hilly features of the site, but also gives me an opportunity to play with the light and drama of the composition. Creating such a strong dark shadow in the foreground amps up the contrast of the overall illustration and really draws the eye through the trees to the lighter and brighter architecture beyond. Also, ivy was added to the base of the architecture. This was one of the areas that I wanted to study and the main reason for this illustration. 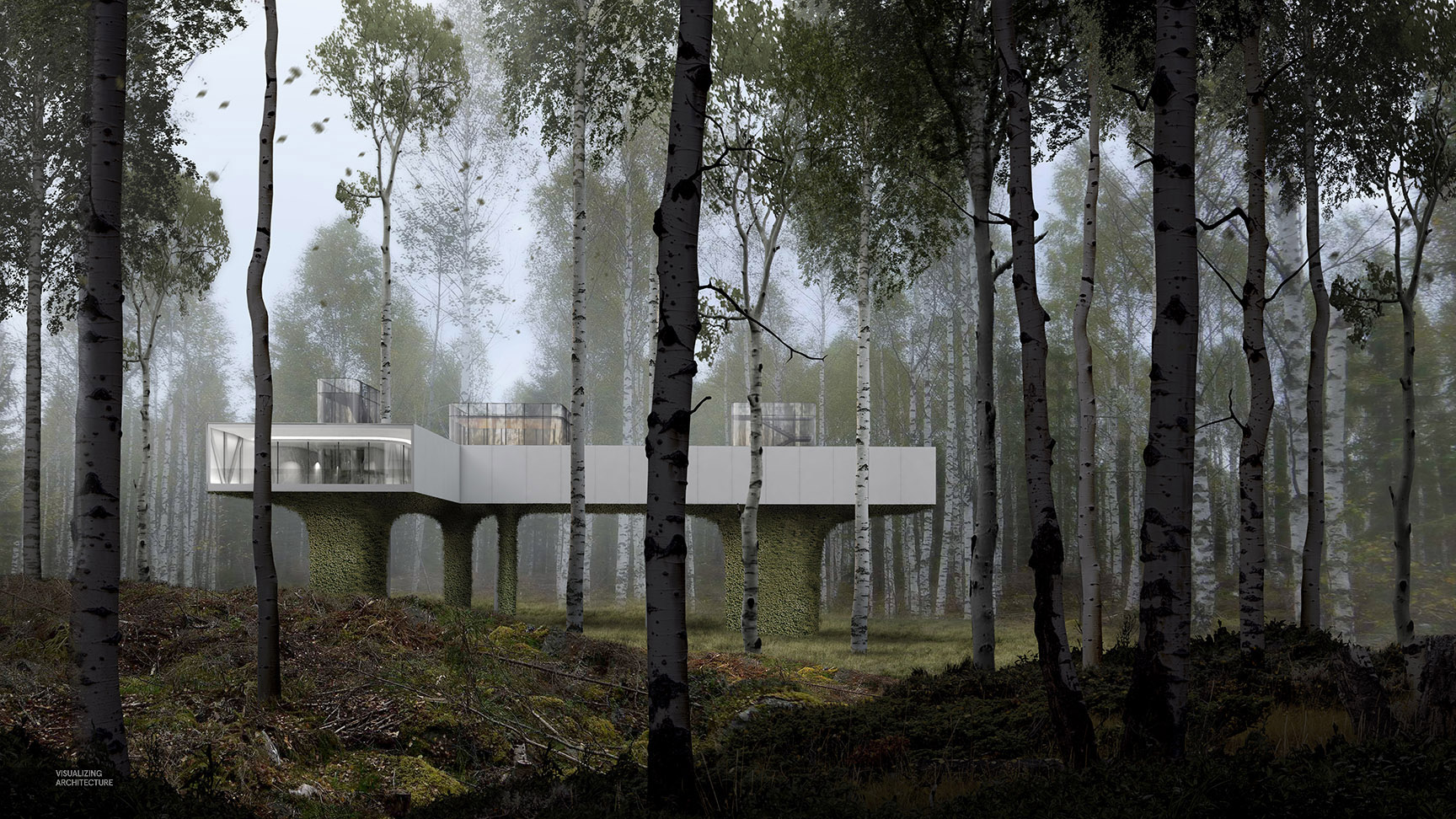 Next, trees were carefully placed in the foreground and mid-ground to help frame the architecture. Nothing too difficult here except to gradually lighten the trees as they thin out near the clearing. 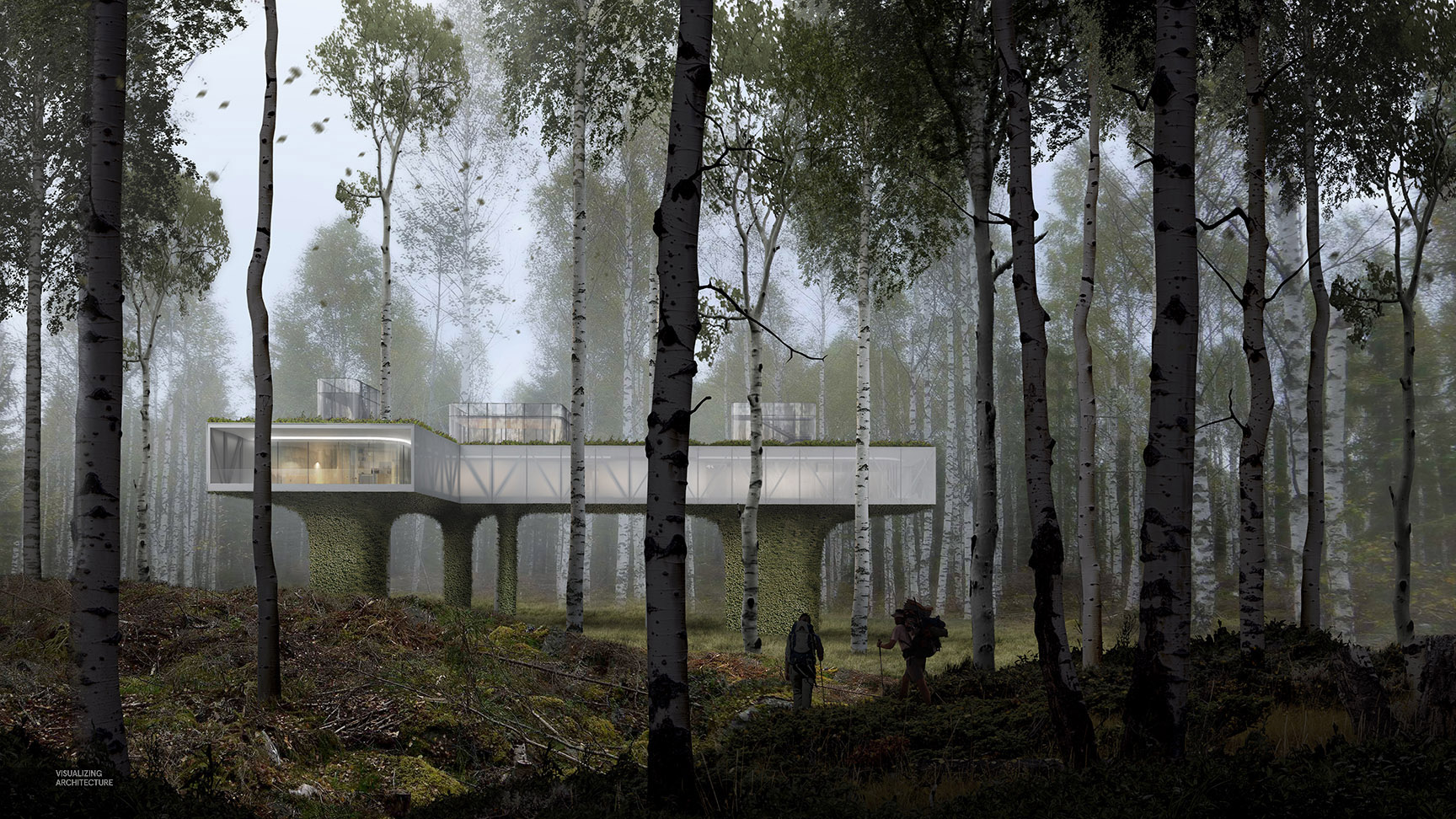 Entourage is minimal but selective. The project is of a research lab, so to reinforce this concept, a small narrative is introduced of scientists returning from a long day of research out in the field. Other elements were adjusted such as the transparency of the side screens and the interior warmth. I used a second rendering of the architecture with the translucent panels turned off to allow me to make selections of the interior in Photoshop and precisely control the opacity and softness of the panels. 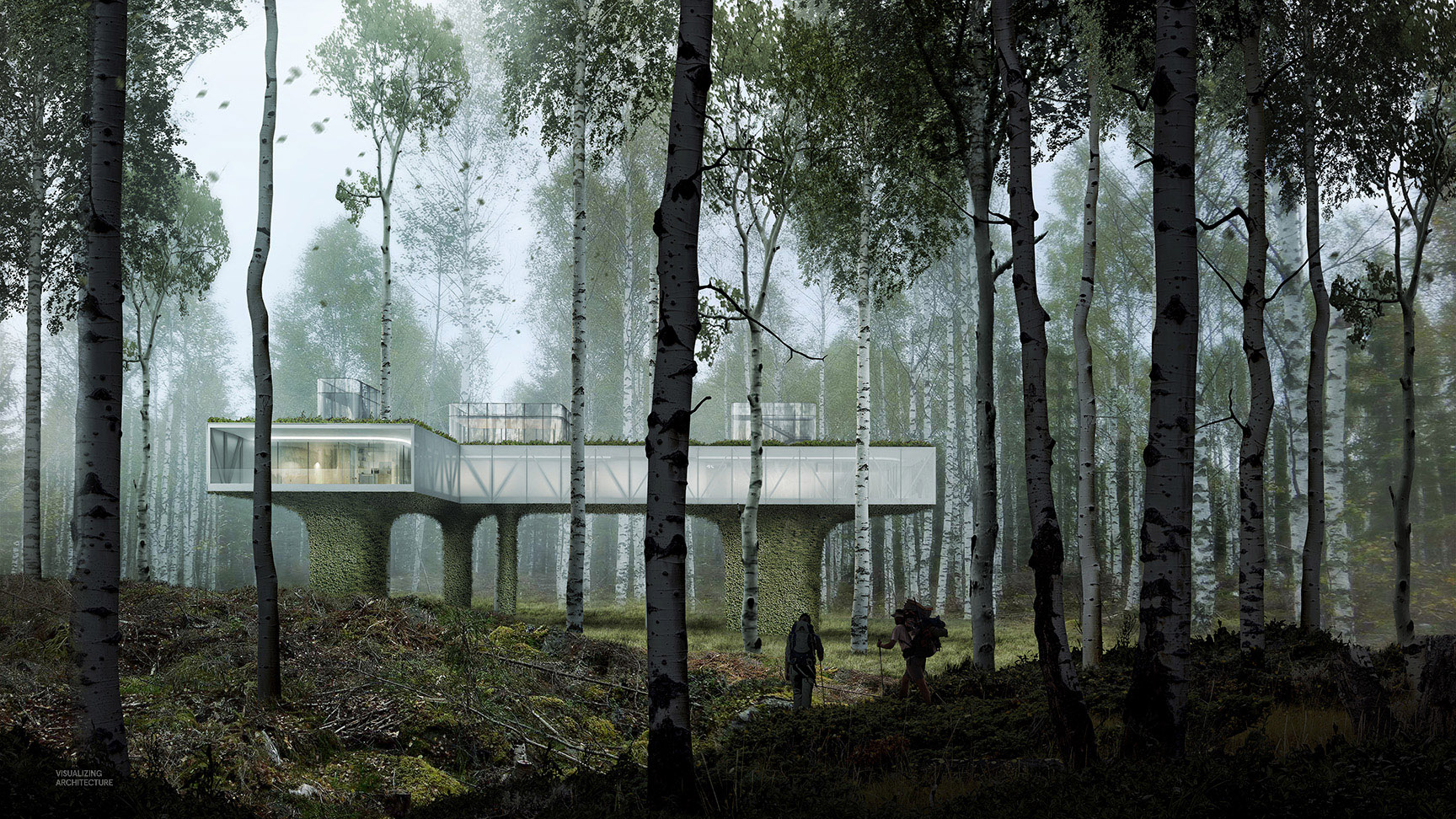 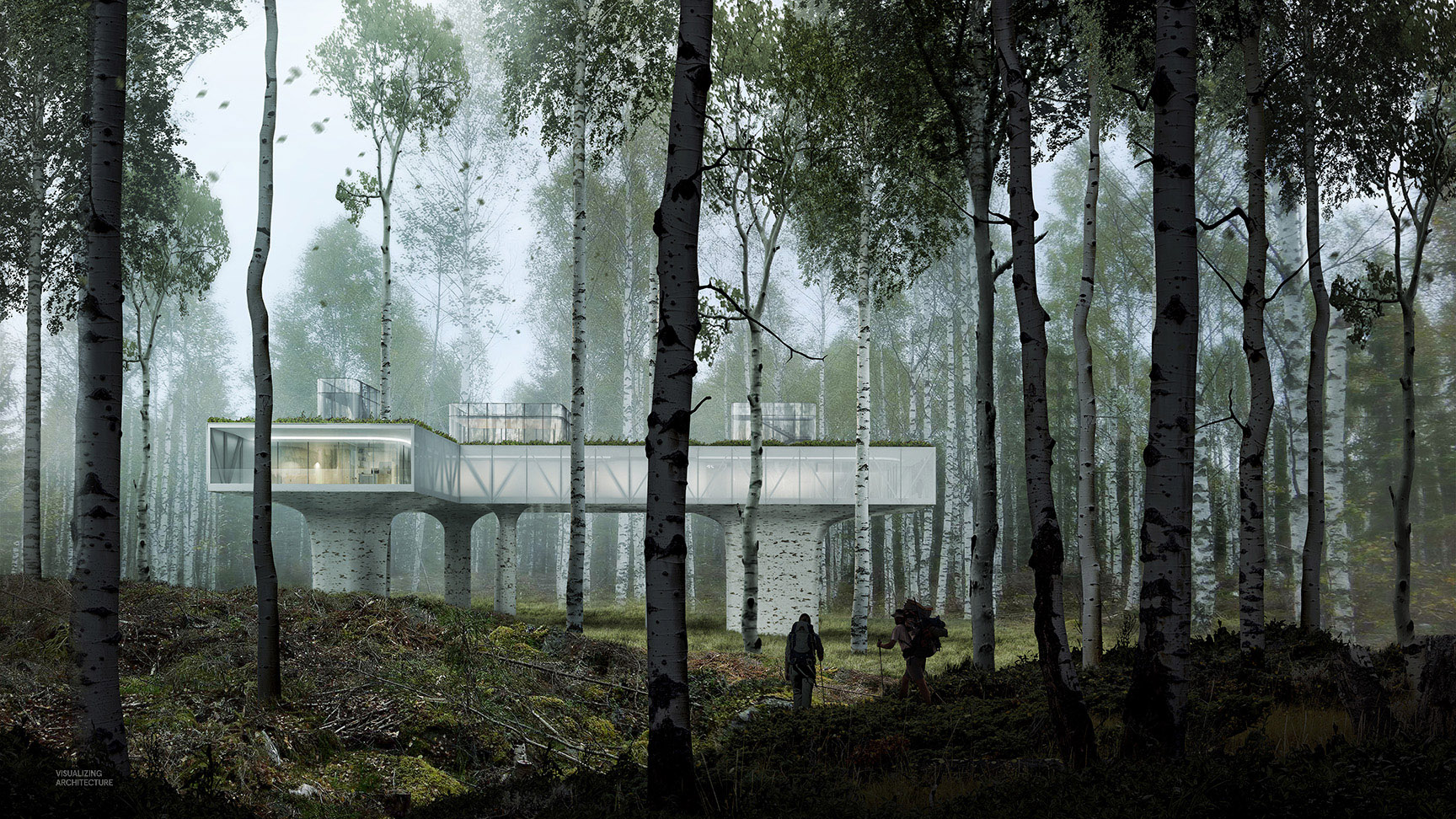 Finally, I jumped in to Topaz and pushed the image slightly cooler in tone. I now have a completed image that clearly shows the relationship of the architecture to the landscape and that would now allow me to better compare material options. The biggest decision was whether to draw the vegetation up the base of the building or leave it as a hard, but textured surface. 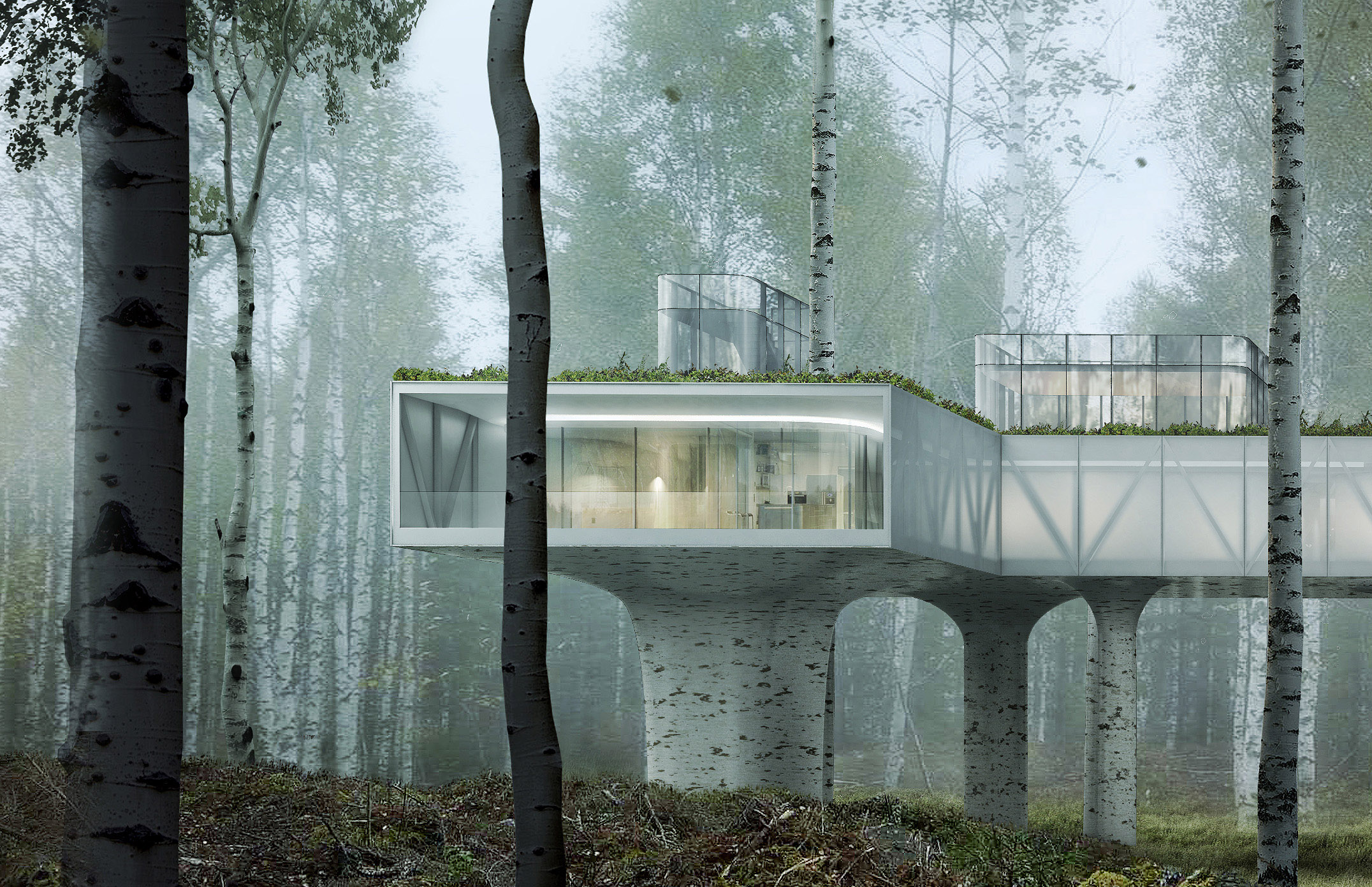 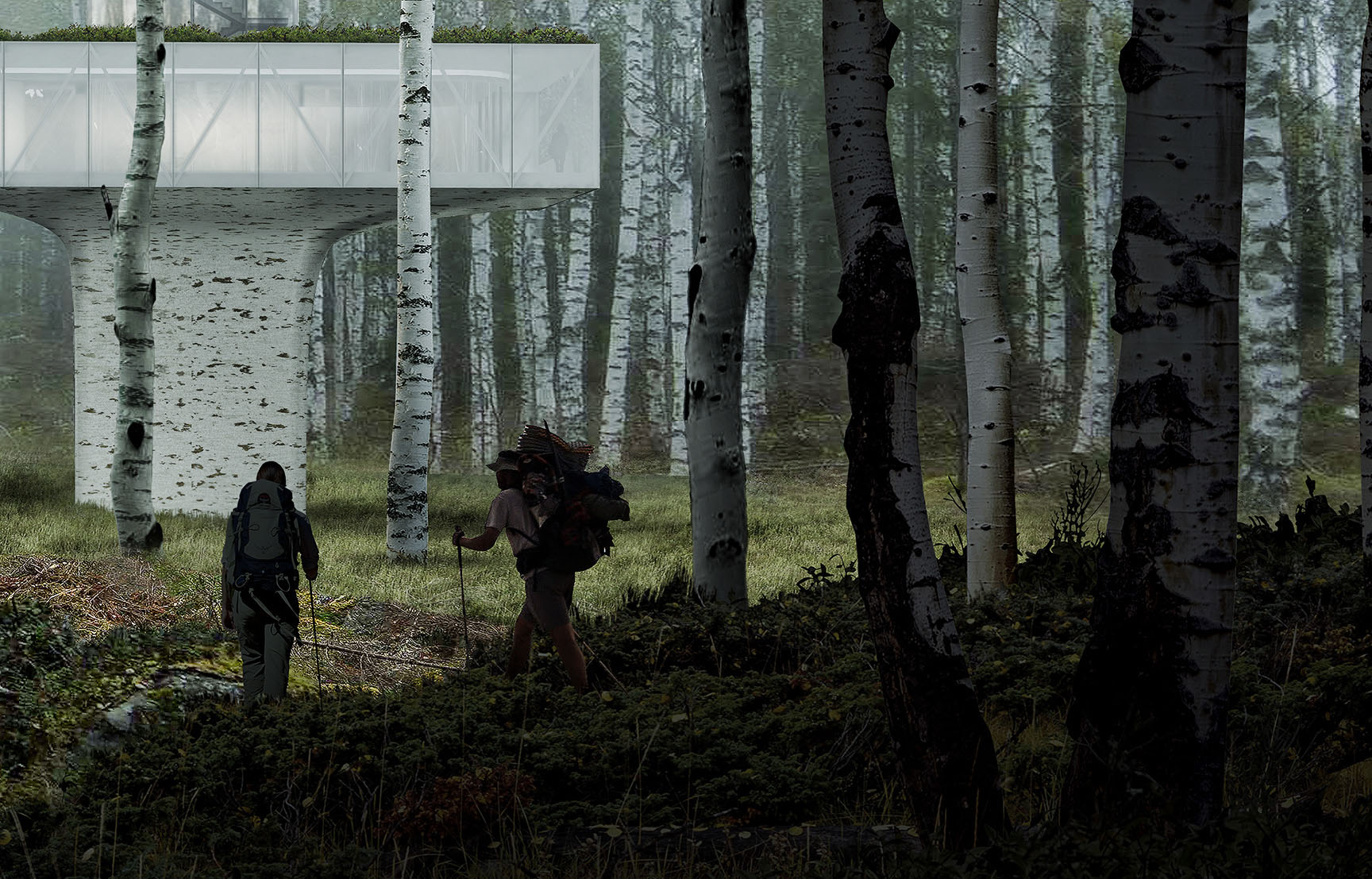