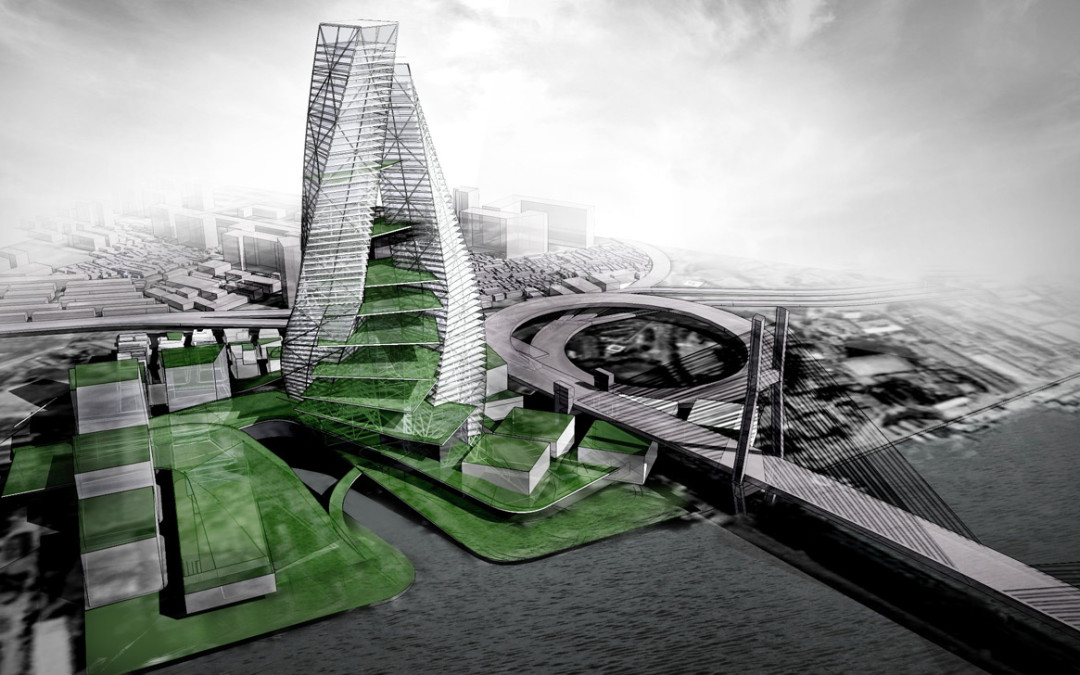 This tutorial will create a daytime rendering by exporting images from Sketchup to Photoshop. This means no external rendering programs are needed. This rendering is not meant to be realistic, but instead, provide an option for quick artistic renderings without the “Sketchup” look.

NOTE: I have inserted a Google Earth map image on the ground plane. This adds a little more interest and texture to the final rendering.

1: First, a view should be saved because multiple images will be exported and overlayed in Photoshop. Accidentally moving the view will make it almost impossible to get the images to line up later. This can be done by going to View>animation>add scene 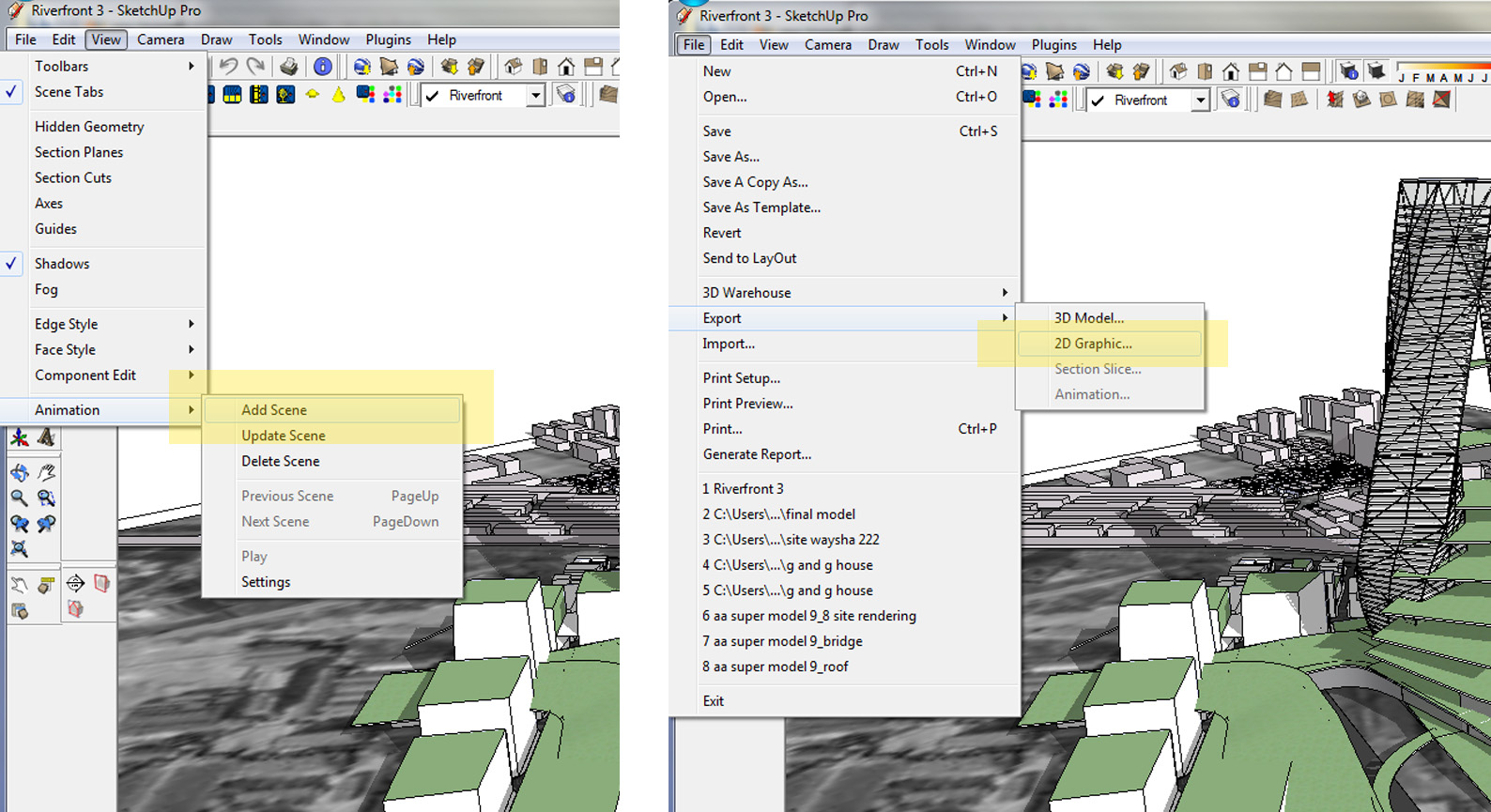 2. Export two images from Sketchup with the following settings: 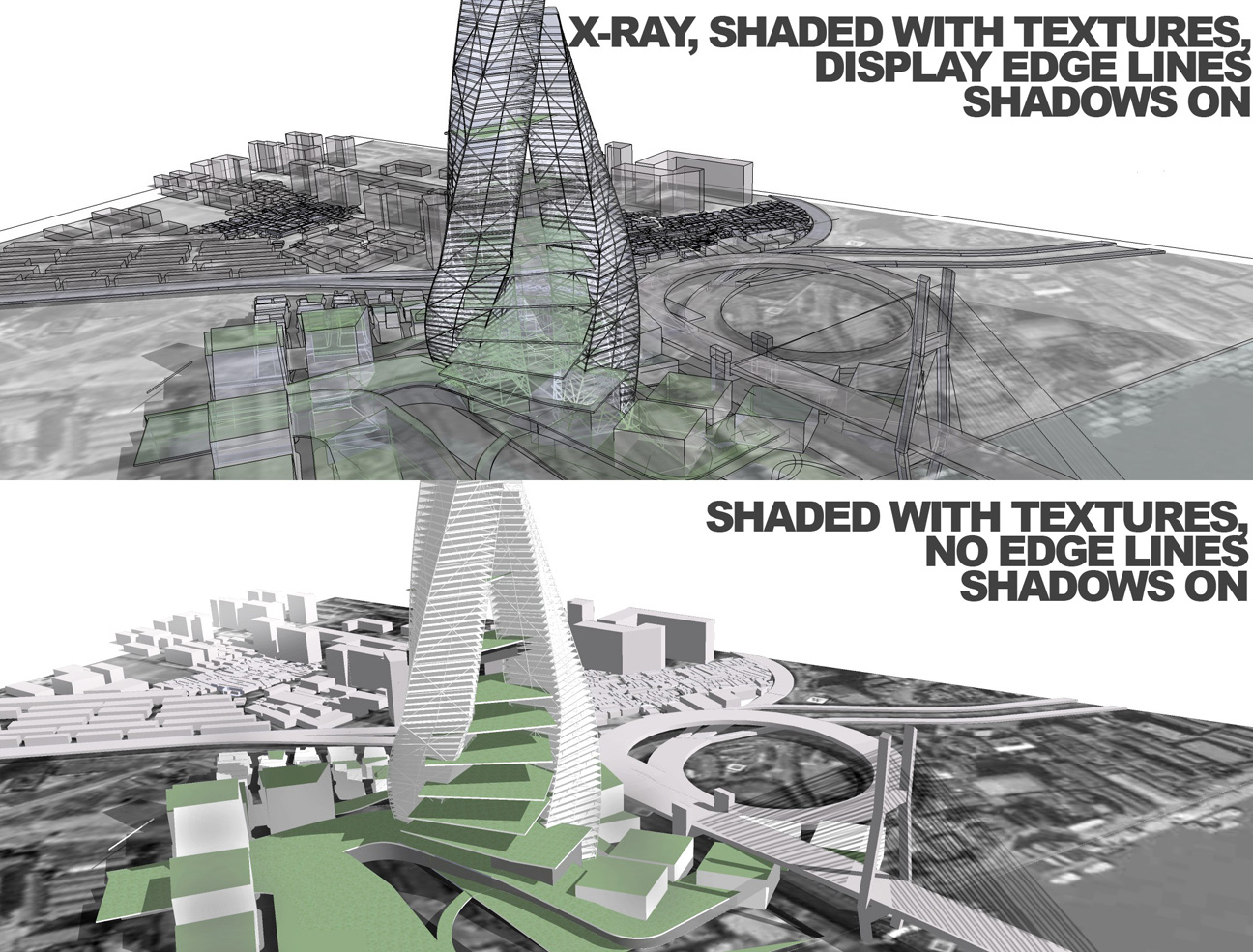 3. Open the first image- Shaded with texture, no edge lines- in Photoshop

Open the second image-X-ray with edge lines- on a new layer above the first image in the same document. Be sure the images line up over each other exactly.

Next, set the blend mode of the x-ray layer (the top layer) to overlay. Blending modes are found in a drop-down menu in the top left corner of the layers palette. The composition should look similar to the image below: 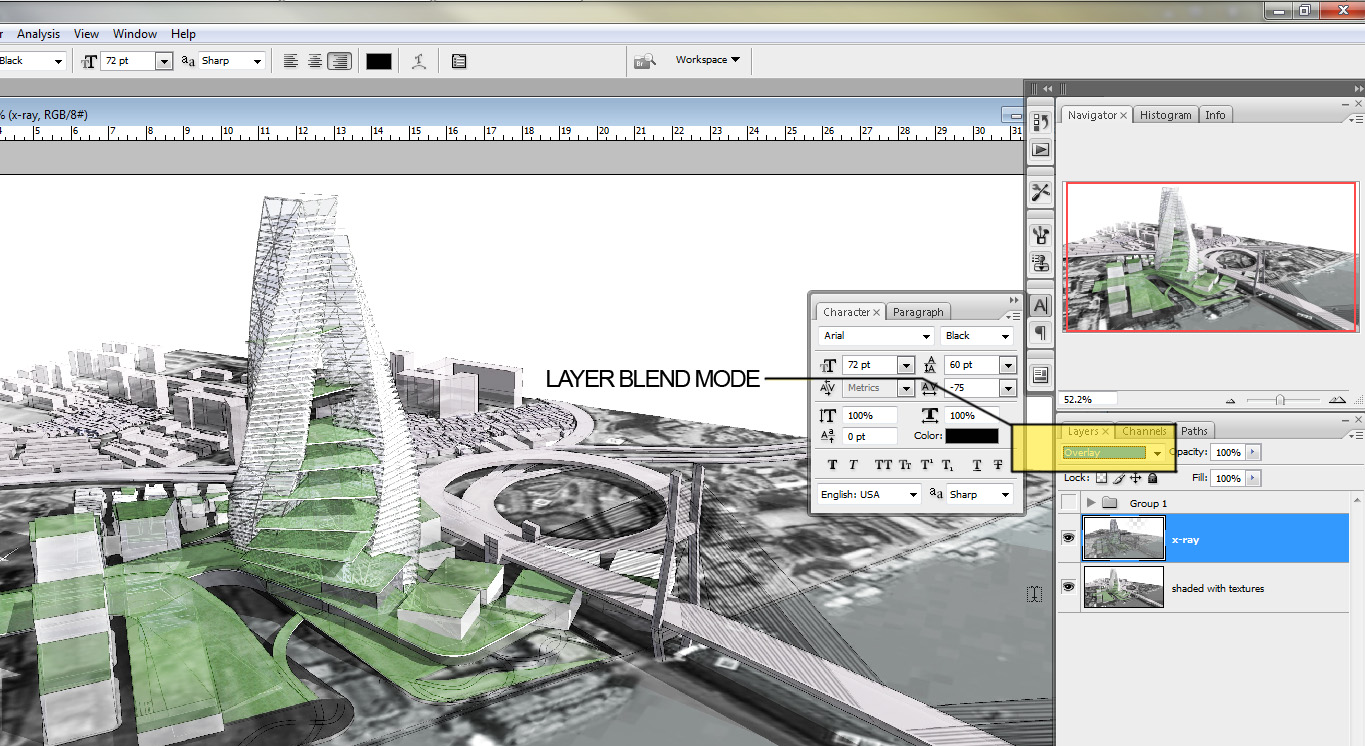 4. Create a new layer and move it to the top.

This layer will be used to create the illusion of fog in the distance and also to hide the edge of the Google map.

Select the paint brush tool and use the following settings: soft brush size 250, opacity set to 35%

Slowly paint the background so that the edge of the Google map and model disappears.

(NOTE: to avoid painting areas you don’t want, use the polygonal lasso too to select areas to only be painted)

5. Next, a new layer is created and a sky inserted. As the clouds get closer to the horizon, I erased them more as well as around the building

In this rendering, I really toned down the sky by desaturating it and lowering the opacity. I don’t want to draw attention away from the building by using bright colors and well-defined clouds.

6. Create one more layer and move it again to the top.

Select the paint brush tool and use similar settings as: soft brush size 1000, opacity set to 35%

With the color set to black, paint around the edge of the rendering until you get a similar effect as the image below. Because it is on a different layer, you can play with the opacity to get the right amount of shadow.  I typically apply this step to many of my renderings. It makes the rendering a little more dramatic and draws the focus to the building. 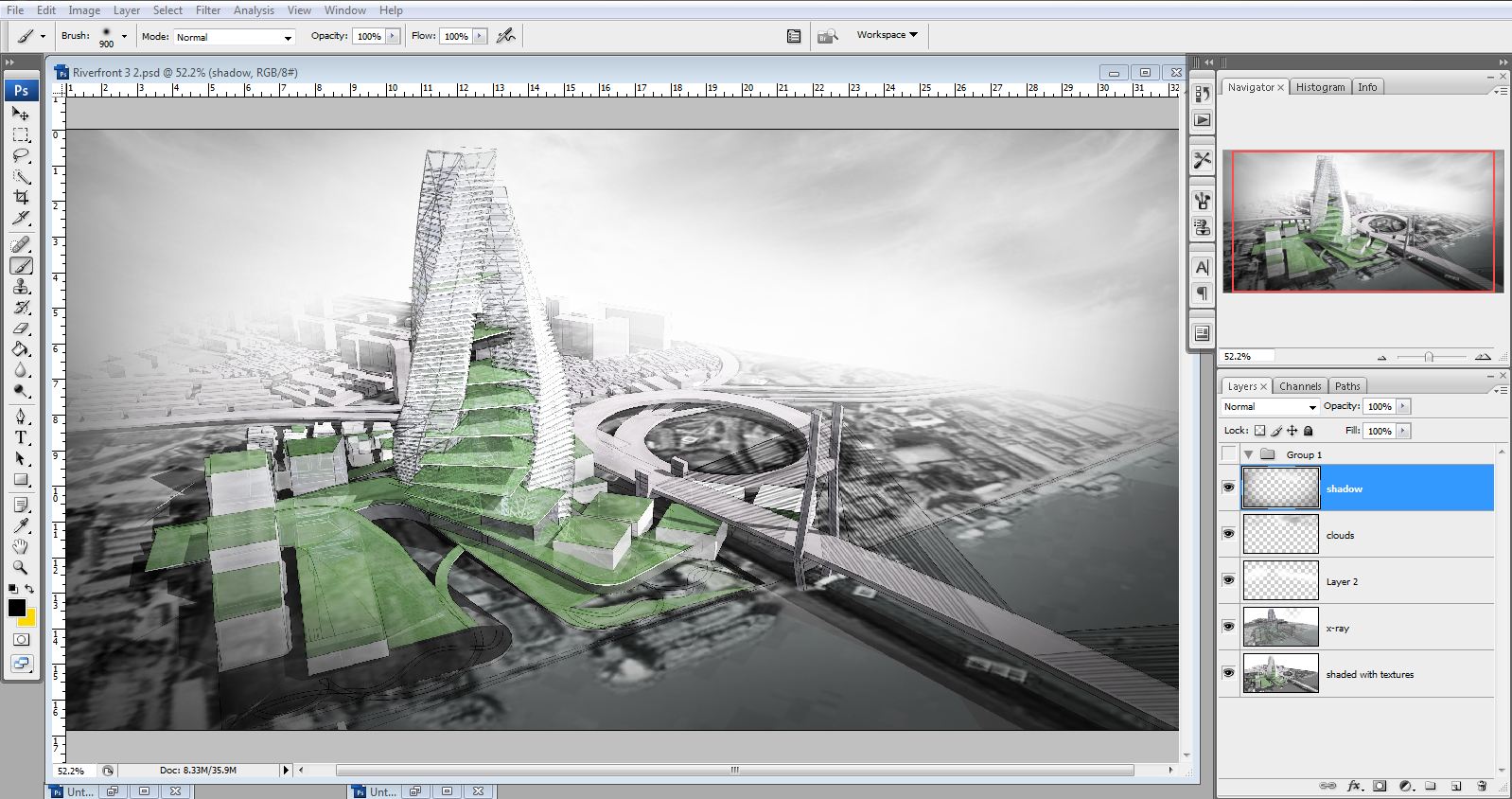 In the final image, you will notice I Photoshopped an image of water into the river and adjusted a few other areas which is more rendering specific. What I like about this rendering is that it is very quick to produce, but also that it has more of an artistic look to it compared to the traditional Sketchup look, with out using complicated external rendering programs 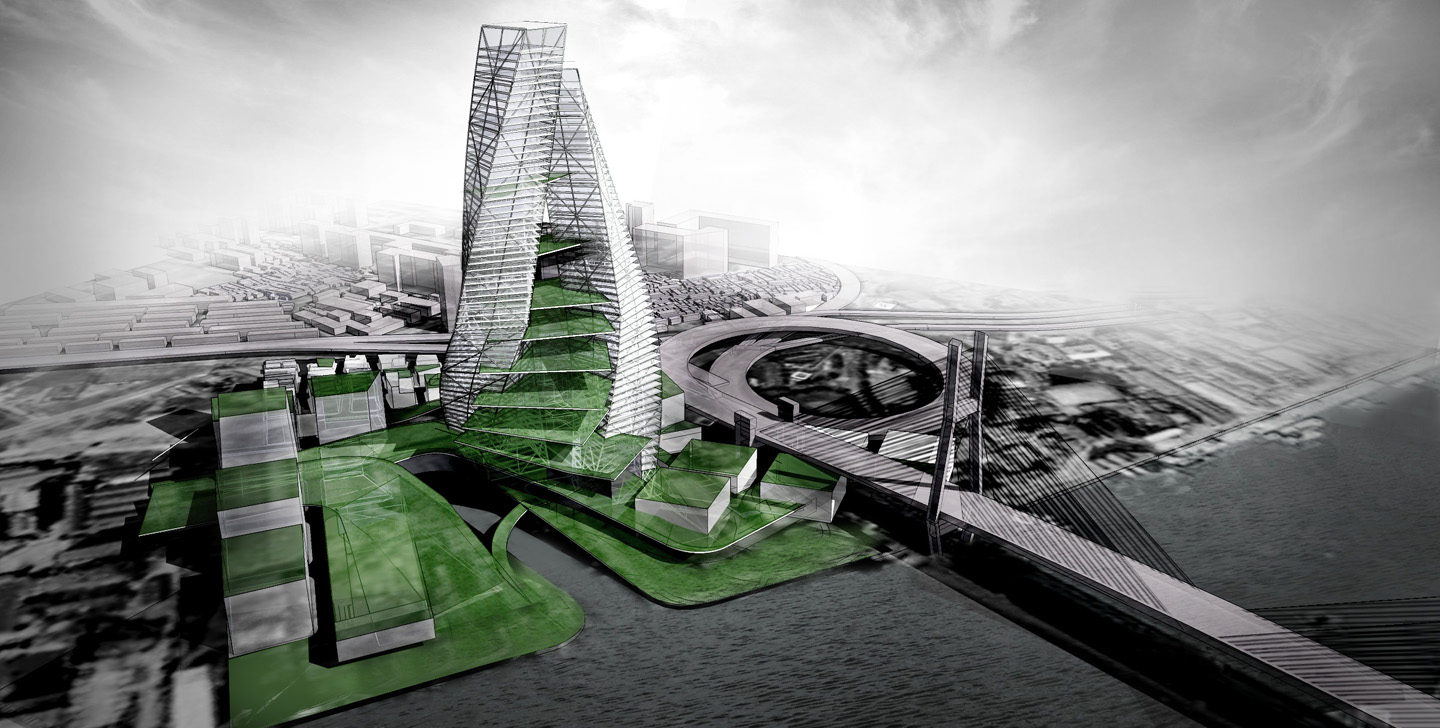