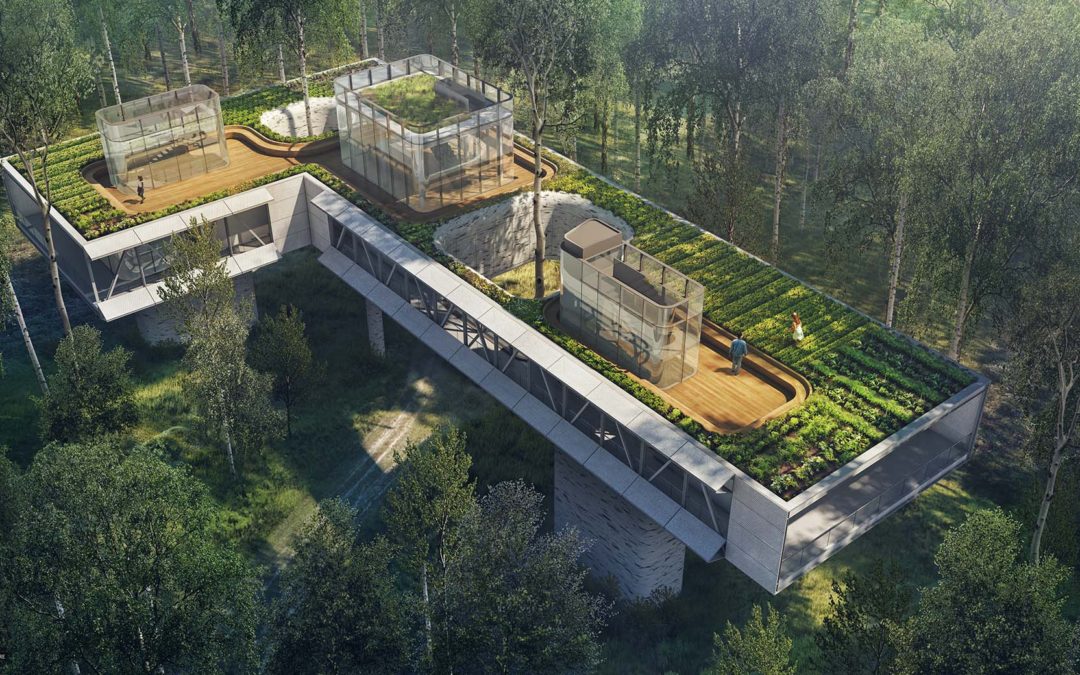 One of the new images I generated for my upcoming Portfolio Volume 05 was an aerial view of the Research Lab Project. Because I have many new images to generate in a short amount of time for the portfolio, I have been trying to minimize time spent on each image. In this case, this image was created in less than a day start to finish. With that said, aerial images with a lot of trees such as this can look complex and difficult to create, but in reality, it’s not that bad. For me, it is all about being systematic with the workflow and keeping the layers clean and organized in Photoshop.

Below is a quick break down of the illustration and the simple process I used to create the aerial forest.

I first setup the view in Sketchup and rendered it out using V-Ray. I also dropped in some trees (hidden in this view) to cast some shadows on the roof. I could have Photoshopped in these shadows but decided to go the 3D route because of all of the geometry happening on the roof.

Next, I setup a new group in Photoshop and added in some ground vegetation. I wasn’t too concerned about how clean the Photoshop was on the vegetation because it was largely going to get covered up with trees. The texture is made up of about three images Cloned Stamped together.

The first thing I typically do when setting up the ground shadows is to extract the shadows from the base rendering. In this case, I grabbed the shadow that the building was casting on the ground, brought it into my “Ground Vegetation” Group, and set the layer blend mode to “Multiply”.

Since there will be a lot of trees covering the site, there will also be lots of tree shadows on the ground. Therefore, I created a tree shadow by taking one of my cutout trees, darkening it, giving it a blue tint to match the ground shadows of the base rendering, and finally added some motion blur. Once I had the tree shadow ready to go, I simply copied it untill the ground was mostly covered.

One quick tip, I setup a new group to contain all of the shadows including the ground shadows from the base rendering. All of the Layer Blend Modes of the individual shadow layers were set to “Normal” so that they did not multiply on top of themselves. I then set the group Layer Blend Mode to “Multiply” to get the final effect.

I compiled five cutout trees that were more or less the type that I need for the forest. Some were older and some were younger for some more diversity. I then copied them throughout the site making sure that I was angling the trunks to match the perspective of the image. Since I only had five different trees, I did a lot of flipping and toning to avoid the trees feeling too copied.

I created a tutorial a while ago going into more depth on this idea of avoiding that copied look Here.

The steps used to add in the roof gardens were identical to those used to add the ground vegetation and shadow. I compiled a group of textures, stitched them into the illustration, and then multiplied the base render shadows on top. I also reworked some of the glass and brought in a few people.

Finally, I adjusted the toning of the image. Not much was done here though. I adjusted the contrast, ran some Topaz filters to pull out some detail, and added a slight atmospheric haze over the entire image.