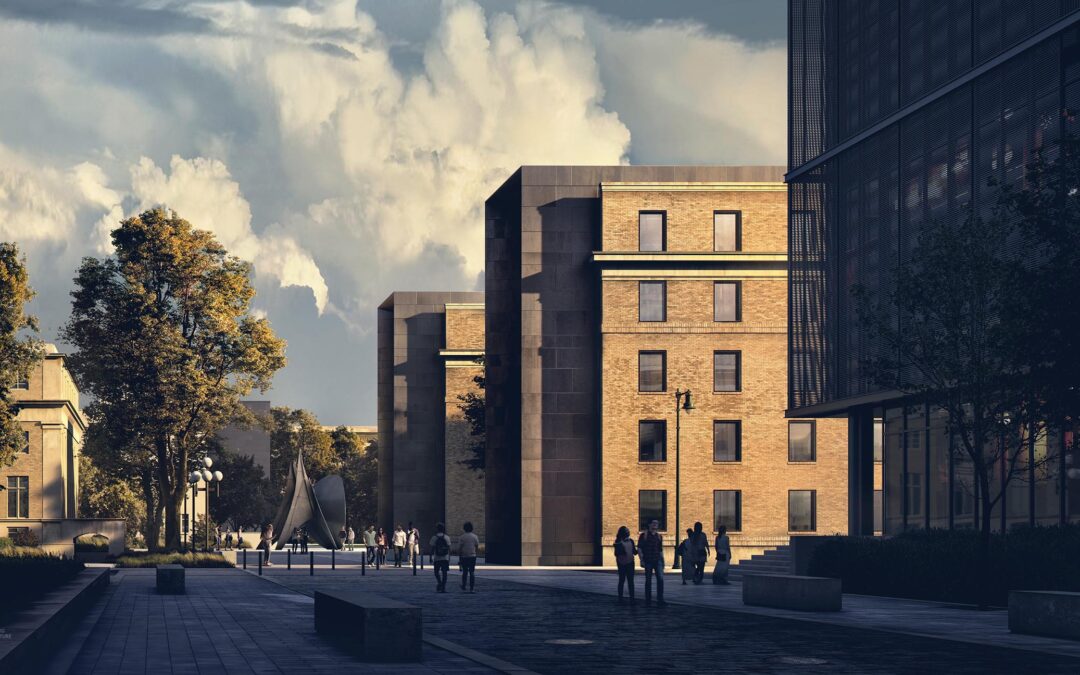 One of the first views of the MIT project that I wanted to explore was an approach shot down a new proposed pedestrian street. It is not necessarily the most compelling view of the new architecture, but I like that the view shows how the student hub volumes reinforce the edge of the new pedestrian street. The existing conditions of the site consist of aging narrow streets, overgrown vegetation, and lots of on-street parking. Yet it runs parallel to some of the most beautiful views of Boston’s Charles River and skyline.

I was trying to think of a different way to break down this image rather than showing a slow buildup of layers in Photoshop like I normally do. What I came up with was to show some side-by-side comparisons between the raw base rendering and the fully Photoshopped final image. I think this method helps reveal all of the nuanced adjustments that happen throughout the illustration. I also tried to extract some of the 2D assets that I used so that you can see how I reworked the lighting and tones of these assets or how I overlaid them to add age and texture to the base rendering.

With each new image that I create, I find myself spending more time thinking about and exploring how to blend the 2D with the 3D to the point that the two are indistinguishable. It has become a borderline obsession for me. The more that I do this, the more I realize that it is less about over-the-top complicated moves in Photoshop but instead more about implementing really simple moves that nudge the tone or lighting to where it needs to be. I’m constantly studying light and tone in the real world which then allows me to better estimate what needs to be done with 2D or 3D elements to better blend the two.

In the above image, there are a lot of really subtle things happening in Photoshop that add up to a much more dramatic final result. I overlaid a ground texture to breakup the plaza. I added a ledge texture in Photoshop to create the appearance of more weathering and age to the seat wall in the foreground. Similarly, textures were added to age the buildings in the background. For the vegetation, I really just used a careful layering system to create moments of highlight and shadow. From there, it was all about reworking the toning so that all of these different cutout elements read holistically as one.

The first thing you may notice with the right side is just how dark certain areas had become to the point that all of the detail was lost. Though this bothered me in the past, it doesn’t much anymore. I tend to worry more about the highlights getting too blown out rather than the shadows getting too dark. The dark shadows help to soften an image when there are a lot of textures going as well as add drama to the highlights of the scene.

Again, I used some textures to breakup the paved plaza. I pulled textures from photographs of the La Grande Voile sculpture to more accurately represent the age and sheen of the steel. I wanted the metal on the new student hub volumes to relate to the sculpture which meant lots of toning and extracting of texture. The whole point of the illustration was to show the relationship of the architecture to the iconic sculptures and buildings surrounding the site and how a well placed pedestrian street could connect these elements. Most of the people were placed in the center of the image to keep the focus there. However, I let them move in and out of the light and shadow to create clear focal points and push elements forward and back.

I actually had a little breakthrough moment when I was working on the sky for this image. It seems whenever I find the “right” sky for an illustration, the quality is terrible. I can sometime run a denoiser filter to smooth it out, but it still lacks detail. In this case, the sky I wanted to use was really poor quality. But I had spent too much time looking for the right cloud formation and was coming up empty so I had to make this one work. The first step was to tone the colors to match the lighting of the scene. I then ran a denoiser (I use a denoiser by Topaz). However, at this point, the clouds still lacked detail. This is where the breakthrough came in. I grabbed the smudge too, set the strength to 90, and used a soft round tip. I then started smudging the edges of the cloud through a series of small quick movements to get back the crisp edge. I was surprised at how natural it looked considering how simple the move was. I spent all of 10 minutes and the image looked like it was at a much higher resolution. I know I am probably not explaining this well, but perhaps I will do some quick tutorial about it in the future.